Instead of growing crops in sunny fields or greenhouses, some companies stack them and grow them in old, dark warehouses with UV lights — saving water and harvesting produce faster.

In an old carpet factory on the outskirts of the Belgian city of Kortrijk, an agricultural upheaval is being plotted: growing crops indoors, not out on a farm, stacked layer after layer under candy-coloured lights in an area the size of a studio flat.

It’s called vertical farming, and several companies have sprung up over the last 10 years or so, filling old warehouses and disused factories with structures that grow vegetables and herbs in cramped, artificially lit quarters out of the warm glow of the sun.

A firm called Urban Crops is one of them. In its case, a large frame is designed to hold conveyor belt-shunted trays of young plants under gently glowing blue and red LEDs in this former carpet factory.

But their system, largely automated, is still a work in progress. When I visit, a software update, scheduled at short notice, means that none of the machinery is working. Chief executive Maarten Vandecruys apologises and explains that, usually, the hardware allows the plants to be fed light and nutrients throughout their growing cycle. Then they can be harvested when the time is right.

“You don’t have the risk of contamination,” says Vandecruys as he points out that the area is sealed off. And each species of crop has a growing plan tailored to its needs, determining its nutrient uptake and light, for instance. Plus, in here, plants grow faster than they do on an outdoor farm. 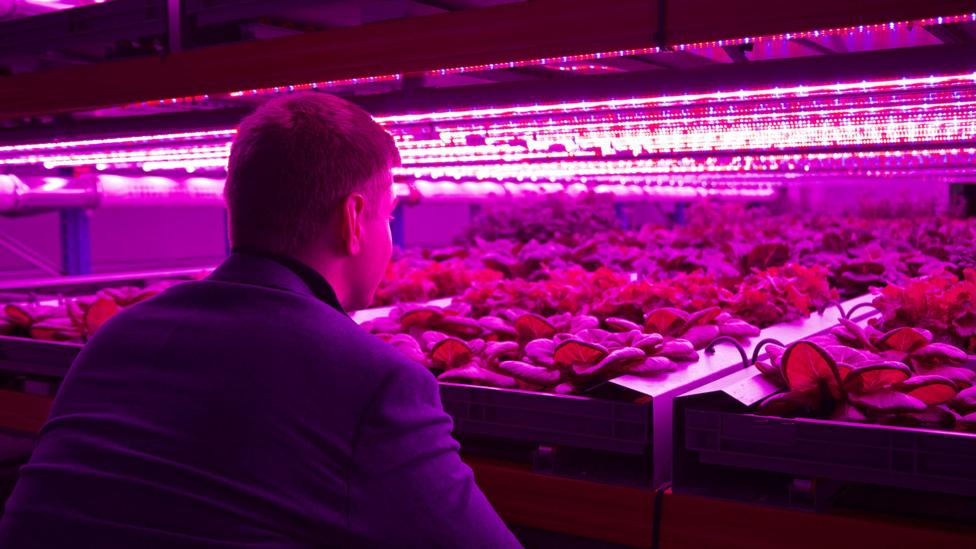 Some companies are turning to vertical farming, which they say uses less water and grows crops faster than outdoor farms or greenhouses (Credit: Urban Crops)

Urban Crops says that vertical farming yields more crops per square metre than traditional farming or greenhouses do. Vertical farming also uses less water, grows plants faster, and can be used year-round – not just in certain seasons. The facilities also can, in theory, be built anywhere.

At Urban Crops, eight layers of plants can be stacked in an area of just 30sq m (322 sq ft). It’s not a commercial-sized operation, but rather a proving ground intended to show that the concept is viable.

“Basically, inside the system, every day is a summer day without a cloud in the sky,” says Vandecruys. 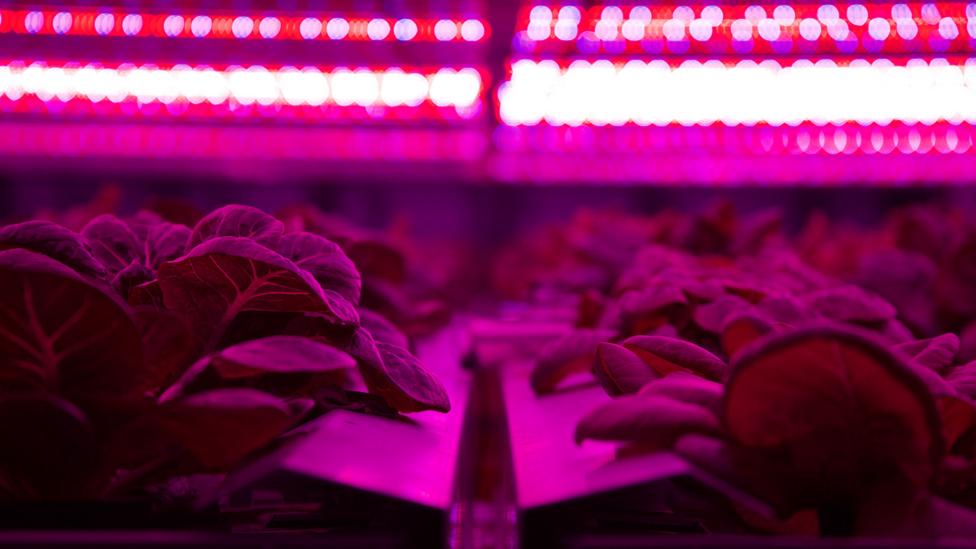 But can you really grow anything in a building, with the right technology at your fingertips?

Vandecruys says it’s possible to grow practically anything inside – but that’s not always a good idea. He explains that it’s more cost-effective to stick to quicker-growing crops that yield a high market value. Herbs, baby greens for salad and edible flowers, for instance, fetch a lot more per kilogram than certain root vegetables, which are more likely to be grown outdoors the old-fashioned way for some time yet.

Basically, inside the system, every day is a summer day without a cloud in the sky - Maarten Vandecruys

By growing plants indoors, you get a lot of fine-grained control you get over the resources your crops need. It allows for rapid growing and predictable nutrient content. The LEDs, for example, can be turned up or down at will and, because they do not give out lots of heat like old filament bulbs, they can be kept close to the plants for optimal light absorption.

Of course, it’s possible to produce the same amount of veg that you might get from an outdoor farm – but with far less land at your disposal.

So, how does it actually work? There are a few main models for indoor agriculture that vertical farmers tend to choose from: hydroponics – in which plants are grown in a nutrient-rich basin of water – and aeroponics, where crops’ roots are periodically sprayed with a mist containing water and nutrients. The latter uses less water overall, but comes with some greater technical challenges. There's also aquaponics, which is slightly different, in that it involves breeding fish to help cultivate bacteria that's used for plant nutrients.

Urban Crops has opted for hydroponics. Vandecruys points out that they recycle the water several times after it is evaporated from the plant and recaptured from the humid air. It’s also treated with UV light to curb the spread of disease.

Perhaps the key benefit of vertical farming is that it uses far less water. “We made an estimation with oak leaf lettuce and there we are actually at, say 5% [water consumption], compared to traditional growing in fields,” explains Vandecruys.

But Urban Crops doesn’t plan to make its money from the sale of crops. It plans to make money on the sale of its vertical farms. 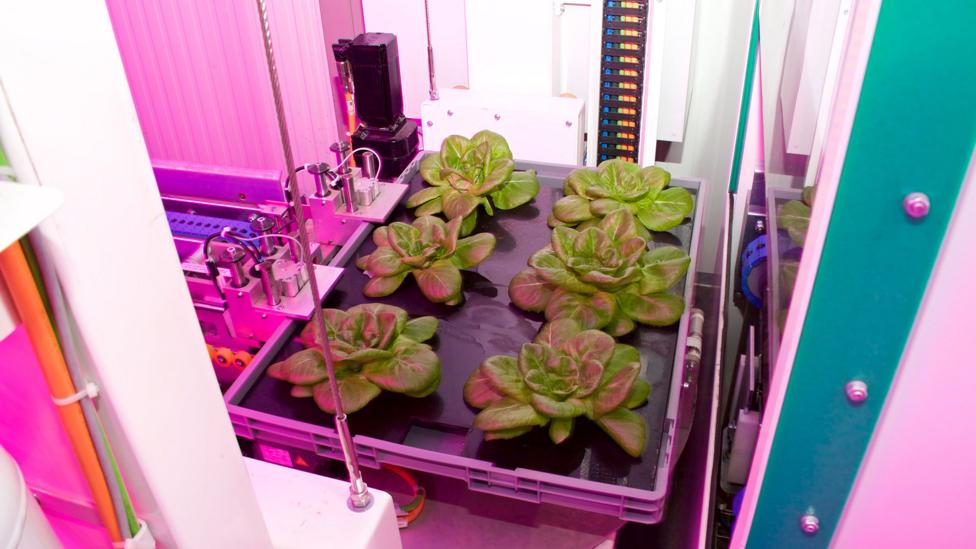 Vertical farm companies hope to one day sell consumers indoor kits of their own for the ultimate 'farm to table' experience (Credit: Urban Crops)

It has designed contained growing systems as a product in and of themselves – people will be able to buy them in order to grow food in relatively confined spaces – potentially bringing farming to urban areas or complexes like the campus of a university. The apparatus can also be installed alongside existing plant production lines at greenhouse farms.

One of the biggest names in vertical farming, however, has a different business model. AeroFarms in New Jersey, USA, has opened what they say is the world’s largest indoor vertical farm – with a total of 7,000 sq m (70,000 sq ft) floor space – and they’re hoping to produce tasty greens in massive quantities.

Ed Harwood is the inventor and agricultural expert who came up with the technology that has made this possible. He got the idea years ago while working for Cornell University, where aeroponic systems were being used to grow plants in a lab setting. Why, he wondered, was this approach not being used on a bigger scale?

“I kept asking, ‘how come’ – people said, ‘Oh, it would never make money, the sun is free, it’s expensive to add lights and everything else, it won’t happen’,” recalls Harwood.

But he wasn’t satisfied with that. After years of experimentation he came up with a system and nozzle design for spraying the aeroponic mist onto his plants’ roots. At AeroFarms, the roots grow through a fine cloth rather than soil. But the details of how he solved the key problem – keeping the nozzles clean over time – remain a trade secret.

“Every nozzle I purchased off the shelf had significant issues,” says Harwood. “I had to do something about it – it was just a cool moment of, I guess, serendipity.” But he’s not telling anyone how he did it.

Like Urban Crops, AeroFarms is prioritising the cultivation of fast-growing salad veg and greens. Harwood believes there is a demand for such produce grown locally in big facilities like theirs that could one day be a feature of city suburbs. And he also promises the guaranteed crunchiness and freshness that consumers want. 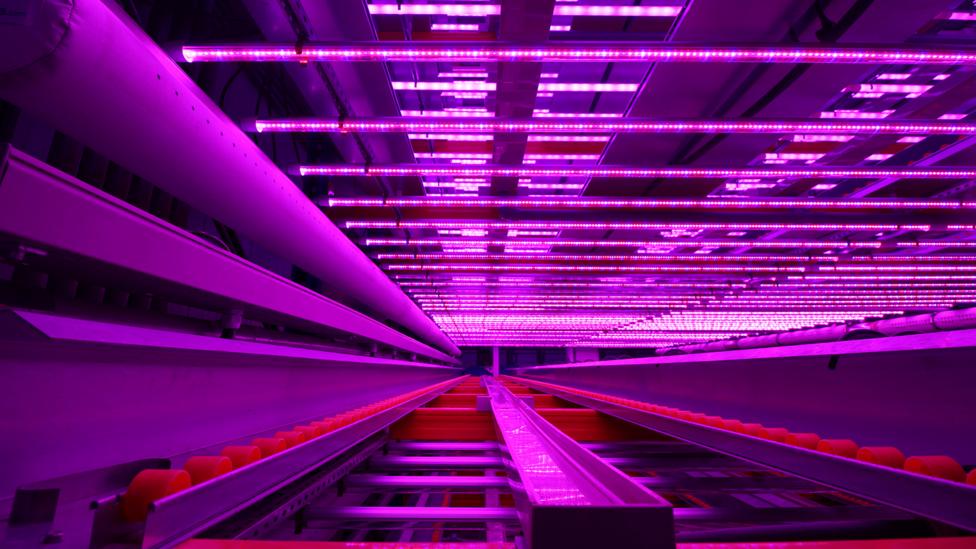 Harwood is firm in his belief that the business he and his colleagues have put together can be profitable. But there are still those who remain sceptical.

Michael Hamm, a professor of sustainable agriculture at Michigan State University, is one of them. He points out that vertical farms depend on constant supplies of electricity, much of which will come from fossil fuel sources.

“Why waste that energy to produce a whole lettuce, when you can get light from the sun?” he says.

And he points out that it just doesn’t make economic sense to grow some crops this way: “At 10 cents a kilowatt hour, the amount of energy it would take to produce wheat would [translate to] something like $11 for a loaf of bread.”

There’s been a spike in home beer brewing – might we see a spike in farming at home, too?

He does acknowledge a few of the benefits, though. If the indoor systems are well-maintained, then the technology should in theory allow for reproducible results with every harvest – you’ll likely get the same quality of crops every time. Plus, while it costs a lot of money to set up a vertical farm in the first instance, it’s potentially a more attractive option to people getting into the agriculture business for the first time – they won’t need to spend years learning how to contend with the vagaries of the sun and seasons. For that, there’s no substitute yet for experience.

With the development of vertical farming technologies, and the likely fall in cost associated with them in coming years, some are betting that all kinds of people will want to start growing their own greens – even at home. There’s been a spike in home beer brewing – might we see a spike in farming at home, too?

Neofarms is one start-up based in Germany and Italy that is anticipating this. Its founders, Henrik Jobczyk and Maximillian Richter, have developed a prototype vertical farm about the size of a household fridge-freezer.

“We designed it in standard kitchen closet sizes,” explains Jobczyk, who adds that their plan is to make the device available as an integrated or standalone design, depending on the customer’s preferences.

People who choose to grow their salad veg at home will pay about two euros (£1.71/2.13) per week in energy costs with this system for the privilege, the pair calculate. And they would also have to keep the Neofarms device clean and constantly topped up with water. But in exchange they will have the freshest produce possible.

“With the plants growing in the system, you know about the conditions they were raised in – that gives you control and knowledge,” says Jobczyk. “But also it’s the freshness, one of the biggest problems with fresh veg – especially the greens – is the field to fork time, the time between harvest and consumption.”

Future supermarkets, though, might be filled with miniature vertical farms of their own

If you pick the plants yourself and eat them straightaway, you might enjoy a richer wealth of vitamins and other nutrients – which can be lost during packaging and transportation. Many consumers already grow their herbs on a window box, but that is a low-cost and low-maintenance activity. It remains to be seen whether the same people would be interested in making the conceptual leap that comes with bringing a mini vertical farm into their own kitchen.

Jobczyk and Richter will have to wait to find out – they’re planning more testing of their device later this year, with a public launch potentially following sometime after that.

Ed Harwood, for one, thinks vertical farming technologies might help to bring agriculture closer to the consumer. But he also sticks by his belief that farming on giant scales is here to stay.

“Irrespective of the number of recalls, I think we’ve improved food safety over all, we’re feeding more people with fewer resources,” he says.

One of the downsides of this is that children have to be introduced to the idea that their food is grown somewhere – it doesn’t come from the supermarket, but a field or factory. Future supermarkets, though, might be filled with miniature vertical farms of their own.

“For the child who says their food comes from the grocery store,” says Harwood, “they might one day be right." 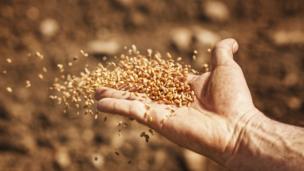 Wild seeds that could save civilisation 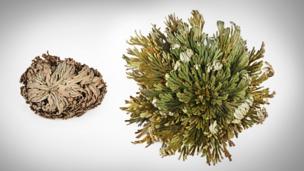 Is this weird plant the future of food? 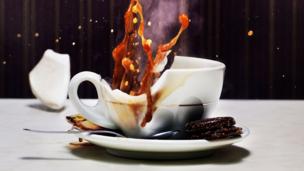 The bitter end of coffee?