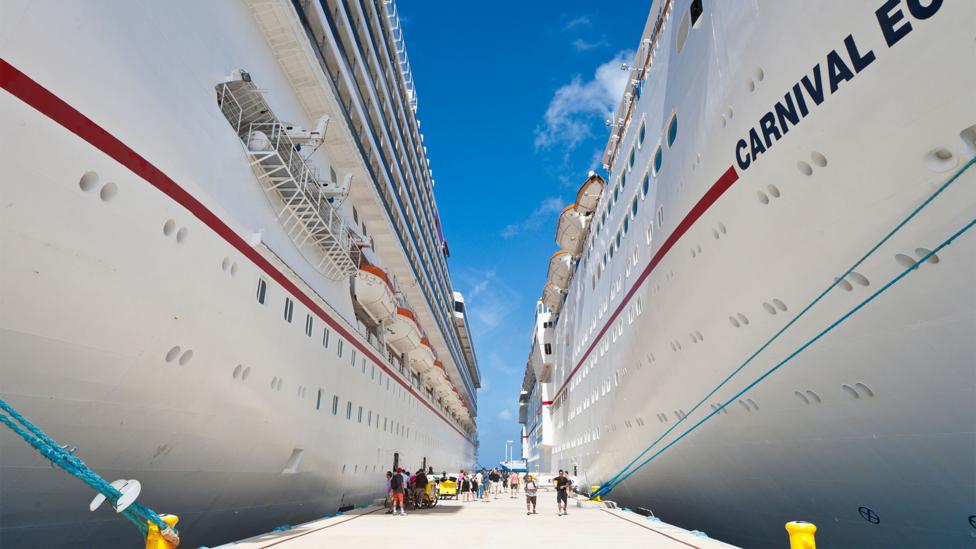 By Kat Long 11th April 2017
The beauty salons, swimming pools and even wireless communications of today’s huge cruise ships all got their start with the “floating palaces” of a century ago.
W

When the world’s then-largest ocean liner embarked on its first transatlantic voyage in September 1907, thousands of spectators gathered at the docks of Liverpool to watch. “She presented an impressive picture as she left, with her mighty funnels and brilliant illumination,” wrote one reporter. Cunard’s RMS Lusitania had been outfitted with a new type of engine that differed from that of its rivals – and would go on to break the speed record for the fastest ocean crossing not once, but twice. 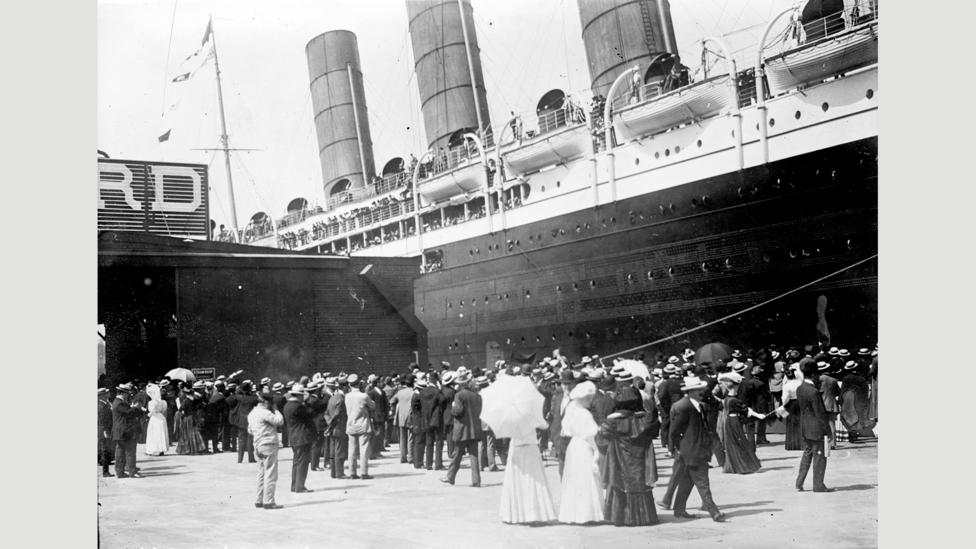 The Lusitania, shown here on its arrival to New York City in 1907, was one of the ships which launched the modern era of leisure cruising (Credit: Alamy)

Between 1850 and 1900, three British passenger lines – Cunard, Inman and White Star – dominated transatlantic travel. Toward the end of the century, as increasing numbers of emigrants sought passage to the US and a growing class of Gilded Age travellers demanded speed and luxury, corporate rivalry intensified. Pressure from other European lines forced the British companies to add amenities like swimming pools and restaurants.

Not unlike today's rivalries between, say, aircraft manufacturers like Airbus and Boeing, each raced to make its ocean liners the largest, fastest and most opulent. In the process, they launched the modern age of leisure cruising – and developed innovations and technologies that continue to be used on cruise ships today.

In the mid-19th Century, there were two main players. Inman’s inaugural steamship, launched in 1850, made it the first major British line to replace traditional side-mounted paddlewheels with a screw propeller – an apparatus with fixed blades turning on a central axis. With the added speed and fuel efficiency this brought, plus a sleek iron hull that was more durable than wood, Inman established itself as a company unafraid to try new technology for faster crossings. 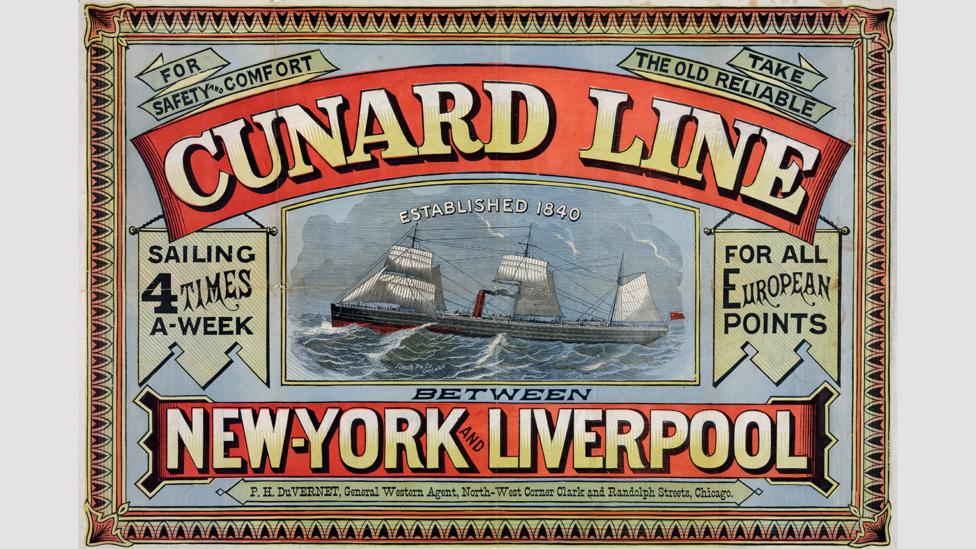 ‘For safety and comfort, take the old reliable Cunard Line’, reads this advertisement from around 1875 (Credit: Alamy)

Inman’s main rival, Cunard, focused on safety instead. “The Cunard way was to let competitors introduce new-fangled technology and let them deal with the setbacks,” says Michael Gallagher, Cunard’s company historian. “Once that technology had proved itself, only then would Cunard consider using it.”

But Cunard risked being left behind both by Inman and by a new rival which burst onto the scene in 1870 – the White Star line’s splashy debut included five huge ocean liners, dubbed “floating hotels”. Their flagship, RMS Oceanic, launched in 1871 and had efficient compound engines that burned just 58 tonnes of coal per day, compared with 110 tonnes consumed by Inman’s ships. That gave White Star the budget to invest in comfort.

In the 1880s and 1890s, each of White Star’s new ships captured the Blue Riband, an unofficial accolade which recognises the passenger liner able to make the fastest average speed on a westbound Atlantic crossing. In answer, Inman built SS City of New York and SS City of Paris. The City of Paris won the Blue Riband several times thanks to its expensive but fuel-efficient triple-expansion engines and twin screw propellers. The innovation was a first for an ocean liner, and meant that if one propeller broke, the other could compensate – finally ending the need for auxiliary sails. This suddenly freed up a lot more space on deck that would later be put to good use by providing luxury facilities for their passengers. 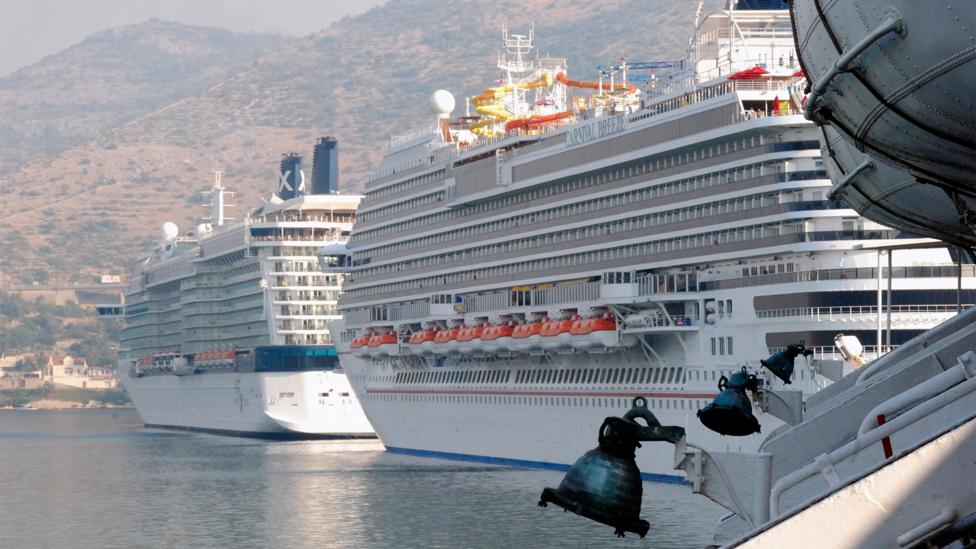 In 1888, Inman introduced ships which no longer required auxiliary sails, giving ocean liners a similar look to the one they have today (Credit: Alamy)

Cunard, meanwhile, ventured into the new world of telecommunications by installing the first Marconi wireless stations, which allowed radio operators to transmit messages at sea, on its sister ships RMS Lucania and RMS Campania. First-class passengers could even book European hotels by wireless before reaching port.

“Connectivity was just as important to passengers in the past as it is today,” says William Roka, historian and public programmes manager at South Street Seaport Museum in New York City.

In 1897, Germany entered the fray. Shipping company Norddeutscher Lloyd unveiled its colossal Kaiser Wilhelm der Grosse – which shocked its rivals by taking the Blue Riband from Britain after 52 years. Another German liner, the SS Amerika, wowed its well-heeled guests by introducing the first à la carte restaurant at sea: the Ritz-Carlton, brainchild of Paris hotelier Cesar Ritz and renowned chef Auguste Escoffier. It allowed guests to order meals at their leisure and dine with their friends rather than attend rigidly scheduled seatings – a forerunner of the kind of freestyle dining seen on today’s cruise ships. 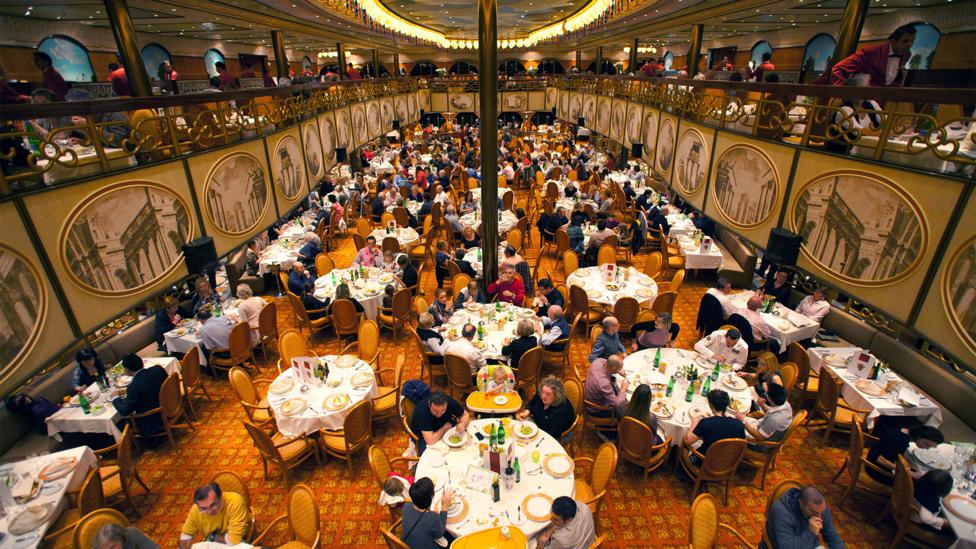 The freestyle dining seen on today’s cruise ships dates back to 1905 (Credit: Alamy)

To complicate matters, American banking tycoon JP Morgan was buying up smaller companies to create a US-based shipping-and-railroad monopoly. In 1901, White Star became his biggest acquisition. Inman, too, now was US-owned, having been bought by an American company in 1893. Suddenly, the battles weren’t only in the boardrooms: building the world’s top ocean liners was now a point of national pride.

With the help of a £2.6 million government loan (equivalent to more than £261 million today), Britain’s Cunard line launched the massive twins RMS Lusitania and RMS Mauretania. Both had the first steam turbine engines of any superliner. To reach its sustained speed of 25 knots (46.25 km/h), the Lusitania had “68 additional furnaces, six more boilers, 52,000 sq ft of heating surface, and an increase of 30,000 horsepower,” reported the New York Times. “If turbines had not been employed, at least three 20,000-horsepower engines would have been necessary.”

White Star fought back with RMS Olympic, RMS Titanic and HMHS Britannic. Like the Lusitania and Mauretania, White Star’s trio would feature double hulls and watertight bulkheads. With standard reciprocating engines, they were slower than the Cunarders, but surpassed them in size and elegance. The Olympic and another White Star liner, the Adriatic, even debuted the first indoor swimming pools at sea. A first-class passenger “may indulge in Turkish and electric baths, take recreation in the gymnasium or [with] a squash racket or divert himself in the swimming pond,” marvelled one newspaper.

A first-class passenger may indulge in Turkish and electric baths, take recreation in the gymnasium or divert himself in the swimming pond

“It was fun for the first-class passengers to send postcards back home saying, ‘Writing to you from the deck of the world’s biggest ship, wish you were here,’” says historian William H Miller Jr. 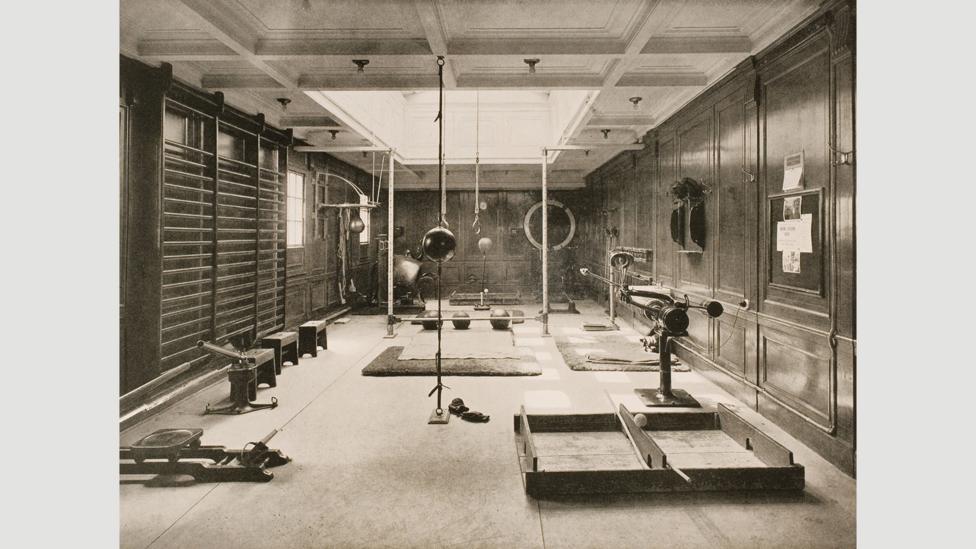 History changed course when Titanic hit an iceberg on 14 April 1912 and sank on her first transatlantic voyage. As a result of the tragedy, safety regulations were updated to require lifeboat berths for every passenger and 24-hour radio surveillance (rules which are still in place).

But there were more challenges to come. World War One broke out in 1914 and European governments requisitioned liners for war service. Then a German submarine torpedoed Lusitania off the coast of Ireland on 7 May 1915, killing more than a thousand of those on board.

Despite a post-war liner-building boom, US anti-immigration laws reduced the number of transatlantic emigrants – the liners’ bread and butter – in the 1920s.

“Ships only made money when there were passengers aboard,” says David Perry, a maritime historian. “The companies needed to do something to stay afloat, so they created the tourists.”

Cunard modernised the aging Mauretania to burn oil instead of coal (most liners were converted to burn oil after World War One), painted its dark hull white to reflect the sunlight and sent her to the tropics as the first cruise ship catering to the new class of passengers: US vacationers who wanted a holiday at sea, replete with the nostalgic glamour of yesteryear. “Cruising offered a way for steamship companies to keep using their older transatlantic vessels and [make] additional revenue,” says Roka. 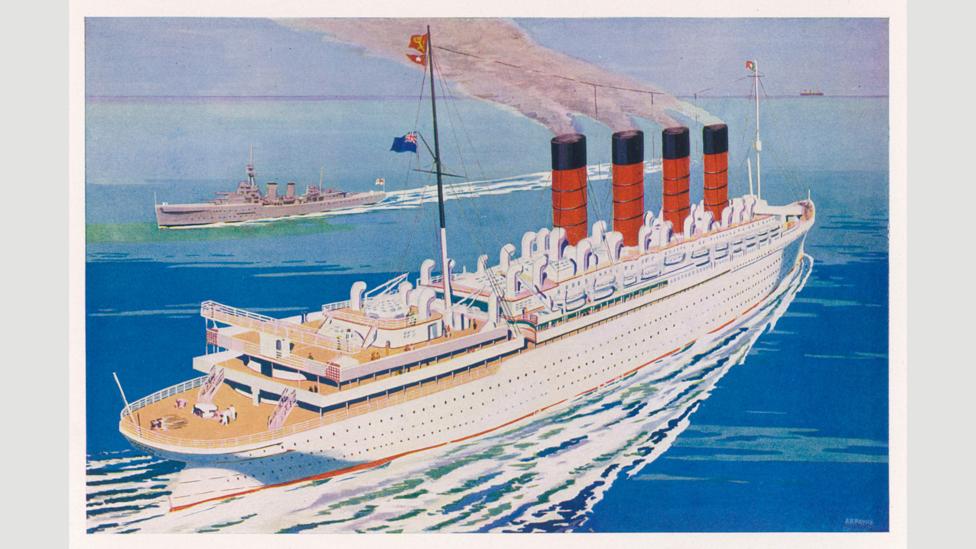 Cunard modernised the Mauretania and gave it a white hull, as shown in this 1930s illustration (Credit: Alamy)

After the Depression forced a struggling Cunard and White Star to merge, the new Cunard-White Star built the immense RMS Queen Mary and RMS Queen Elizabeth. To compete with German, American and French liners, designers ratcheted up the creature comforts, like air-conditioning and private bathrooms in every stateroom. The Italian liners Conte de Savoia and Rex featured the first outdoor swimming pools “with real sand around them to make it look beachy – completely over the top,” Perry says. By 1957, more people crossed the Atlantic by ship than ever before.

But by the following year, jet passengers outnumbered them.

“Cunard said flying was a fad,” Miller says. “But if, like the company slogan said, ‘Getting there is half the fun’, then getting there faster was a lot more fun.” 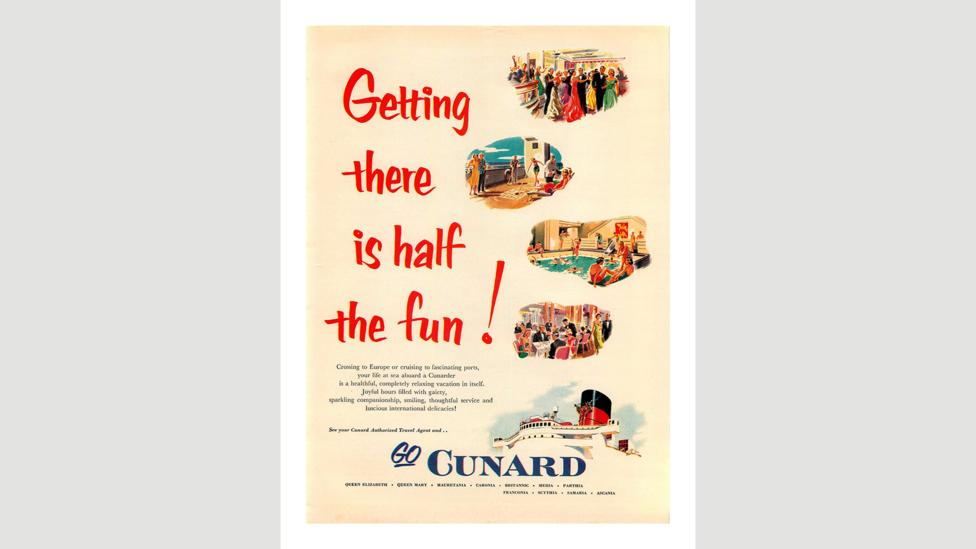 Despite Cunard’s best efforts, by the late 1950s more people were flying than taking ships to their destinations (Credit: Alamy)

Even so, cruising itself grew more popular over the ensuing decades. And not only does the idea of leisure cruising stem from these early days of competition, but so do many of the specific features of today’s massive ships.

Today’s vessels still feature oil-burning engines, though the power and propulsion systems are much more sophisticated. Modern perks like barbershops and beauty salons, freestyle dining, pools and libraries all were introduced on the original “floating palaces.” Even internet communication has its roots in the wireless rooms aboard the great ocean liners.

But the most important similarity may be the most basic.

“The feeling of the deck under your feet is the same,” says Perry. “That’s the transformative power of a voyage at sea.”