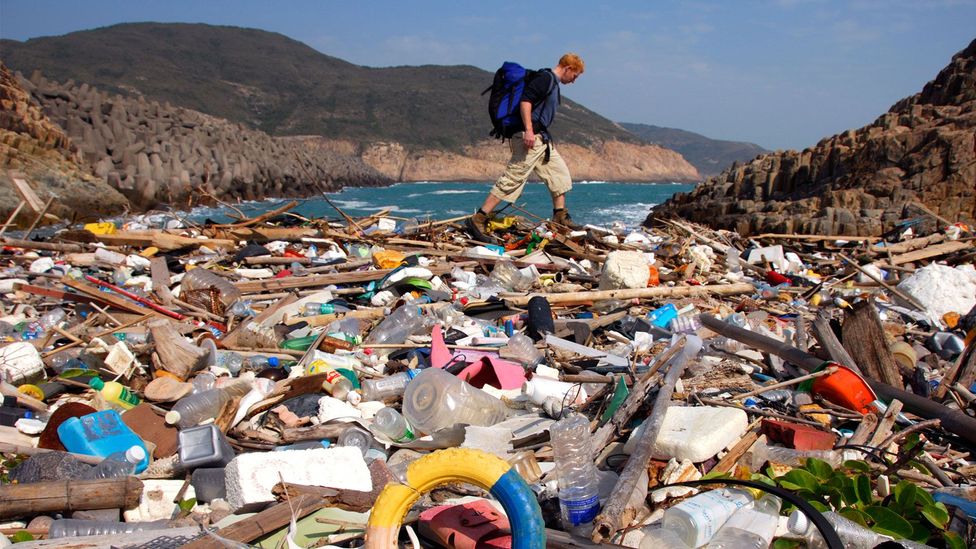 By David Robson 27th April 2017
By 2020, the region’s landfill sites will be full to bursting with rubbish. What can be done?
W

When I first meet Chan King Ming at the Chinese University of Hong Kong, it is difficult to imagine that the region is facing an environmental disaster. We are speaking on a crisp spring morning, in the leafy university campus in Hong Kong’s New Territories. Between the trees, I can see the sea glistening under the gaze of the city’s towerblocks and the steep climb of the mountains behind. There is not a single discarded plastic bottle or used newspaper in sight.

But appearances are deceptive. Hong Kong may be clean on the surface, but its public services are straining to keep a lid on its rubbish. Despite attempts to clean up its act, the region produced 3.7 million tonnes of municipal waste in 2015 – the highest figure for five years. It has already cycled through 13 landfill sites, which are now being repurposed as parks, golf courses, and sportsgrounds, with just three sites remaining open. At this rate, it will only be a matter of a few years before those too begin to overflow. “If Hong Kong continues in this way, we will reach breaking point by 2020,” says Chan – an estimate supported by Hong Kong’s own Environmental Protection Department.

Hong Kong could be a warning for many other countries, as more and more people feel the lure of city living

Chan is both an environmental scientist and a politician for the Neo Democrat Party of Hong Kong, experience that has given him an unparalleled view of the social, economic and technological difficulties of saving the city from this deluge. “We are moving in the direction of unsustainable urbanisation,” says Chan. And that could be a warning for other countries, as more and more people feel the lure of city living – meaning that environmentalists across the world will be watching Hong Kong’s next steps closely. 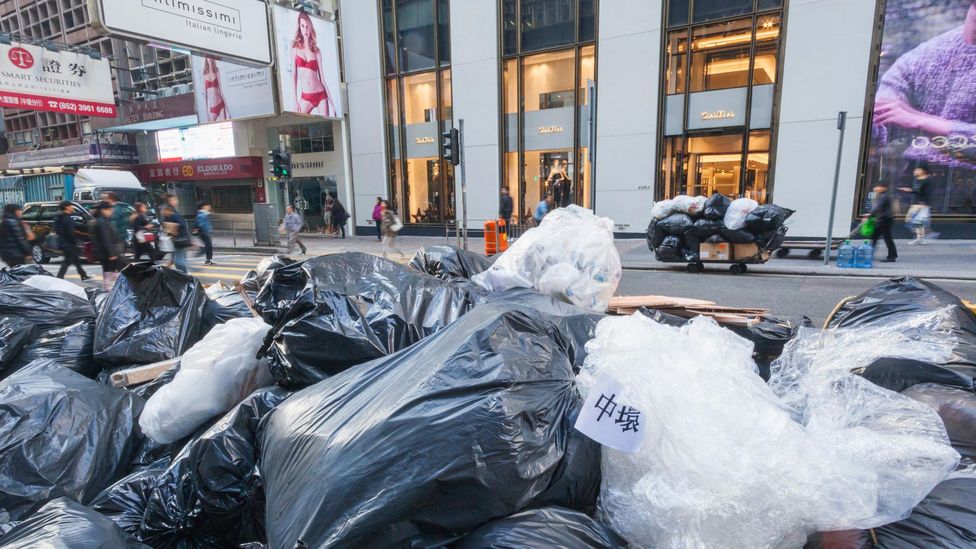 Hong Kong residents may soon have to pay a small fee for every bag of rubbish they dispose (Credit: Alamy)

With around seven million people, crammed into an area of 2,000 square kilometres (772 sq miles), Hong Kong is currently the fourth most densely populated place in the world (after its neighbour, Macau, and Singapore and Monaco). With space at such a premium, there is precious little room to build new landfill sites.

Hong Kong’s tourism has only piled on the pressure. As the region’s industries moved to mainland China, the region made an active bid to attract more visitors from the mainland to boost its economy. It now brings around 60 million additional people to the islands per year (nearly seven times the permanent population), with around 70% coming from mainland China. Hong Kong’s cuisine and shopping malls are both among the key attractions, meaning that each of those visitors will generate a lot of additional food and packing waste. “We need them to boost our economy, but there are also drawbacks,” says Chan.

Compounding these problems is Hong Kong’s status as a ‘free economy’, which means that the government is reluctant to impose regulations that may threaten trade. “It’s supposed to be the most free economy in the world, so government officials try their best not to intervene in any way with our production lines, or consumer behaviours,” says Chan. For this reason, there is currently little legislation on product packaging, for instance, or any other measures that could reduce waste.

Along with many other countries, Hong Kong had once offloaded some of its rubbish to mainland China for recycling. While Chinese businesses were able to make use of scrap metals, plastics, and rare metals in electronic goods, it also often came with unusable and contaminated leftovers (including food and medical waste) – creating further environmental issues for Chinese cities. As a result, the government decided to ban the importing of unprocessed materials – a move known as a “Green Fence” – in the hope that other countries would clean up their material before selling the valuable stuff.

Unfortunately, Hong Kong has not yet developed enough of its own recycling plants to compensate for the changing policy. “So stuff that would have been sent to China to be processed is just being put in the landfill,” says Doug Woodring, an environmental campaigner and co-founder of the Ocean Recovery Alliance, who I meet after my conversation with Chan. 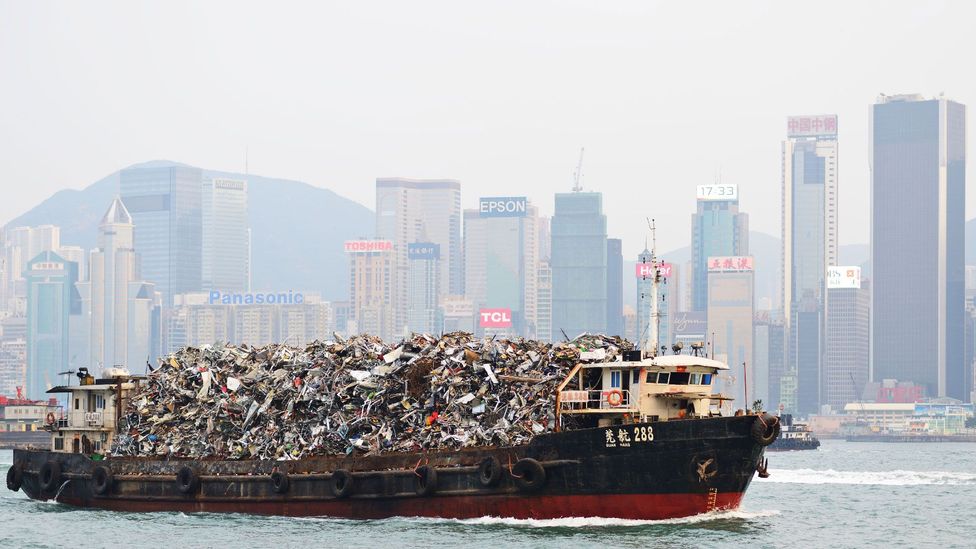 Hong Kong had once exported its waste to mainland China, but recent legislation has meant that it must process its own rubbish (Credit: Alamy)

The result is that despite repeated warnings, Hong Kong’s municipal waste had continued to grow over the last five years – and the government will need to act quickly before all the territory’s landfills have been exhausted.

One big step will be the introduction of a “waste charge”, which would force locals to pay around $0.11 Hong Kong dollars (around £0.01) for each litre of rubbish collected. The new legislation, announced earlier this year, should take effect by 2019, and the South China Morning Post estimates that it amounts to around $33-54 Hong Kong dollars (roughly £3-5) per household, per month. The legistlation’s proponents point across the sea to Taipei in Taiwan, and Seoul in South Korea, which both managed to reduce waste disposal by more than 30% using similar schemes.

Hong Kong’s Environmental Protection Department is also forging ahead with plans for a $10 billion dollar incinerator on Lantau (the largest of the territory’s islands, towards the south west of the region). Burning the waste should shrink it to around a tenth of its size. Even so, it can only burn so much waste – about 30% of the city’s total output overall, according to Chan’s estimates. The solution is far from popular with the locals, who are understandably concerned about the increased air pollution it may bring.

Chan is more enthusiastic about plans to build a food processing plant on Lantau, which would recycle waste from the commercial kitchens around the airport. He points out that horticulturists currently import a lot of their garden compost from as far away as the Netherlands – whereas the decomposed food waste would be a natural local source. Such plants may also produce biogas to fuel cars. “By our rough estimation, we’d need 20 factories of that size to deal with our food waste,” Chan says. “But I think it’s worth doing, because we need to recycle as much usable material as possible.” 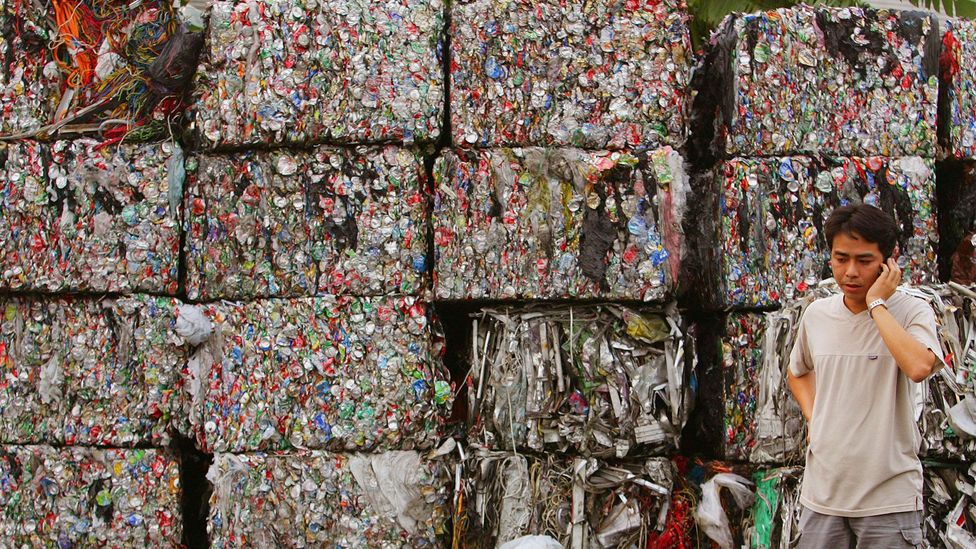 Without new recycling plants, Hong Kong will struggle to cope with the rising tide of waste coming from its citizens and tourists (Credit: Alamy)

The territory may also benefit from further e-waste ‘upcycling’ factories, allowing manufacturers to extract valuable raw materials for export – a move that could further boost Hong Kong’s economy. But these schemes need further government support, including a better system that forces families and businesses to separate the different kinds of waste – food, plastics, glass – at the source, before it is collected. “Right now that’s lacking,” Chan says.

The sheer volume of waste, coming from so many people, makes it too difficult to sort the good from the bad after collection. “The problem is that right now, everything is put in one bag – food, grease, and then your paper, then your plastic – and that neutralises the value of them all,” says Woodring. “Even if you sort wet waste from dry, it’s so much easier for anyone to get some value from it.”

Woodring would also like people and companies to calculate a “plastic footprint” – akin to the “carbon footprint” for greenhouse emissions – so that people are more conscious of the waste they are creating. “Because if you don’t know what you have, you don’t know how to manage it.”

As Chan and Woodring both point out, environmental measures do not need to challenge Hong Kong’s existing businesses: it can offer ways to generate new revenue. Woodring, for instance, points out that Pacific Coffee (one of the city’s ubiquitous US-style coffee houses) has recently implemented its own recycling scheme, where you can return your used lids in return for a free refill, which helps the company to collect recycled materials while also increasing customer loyalty. So far, these kinds of strategies are rare in Hong Kong, but it’s a move in the right direction, he says.

Chan’s impatience is clear throughout our conversation: the problem has been apparent for at least a decade, he says, but progress has been slow, with endless discussions in place of decisive policy. “We’ve wasted all this time.” As the deluge of rubbish continues to rise, inaction is now not an option.