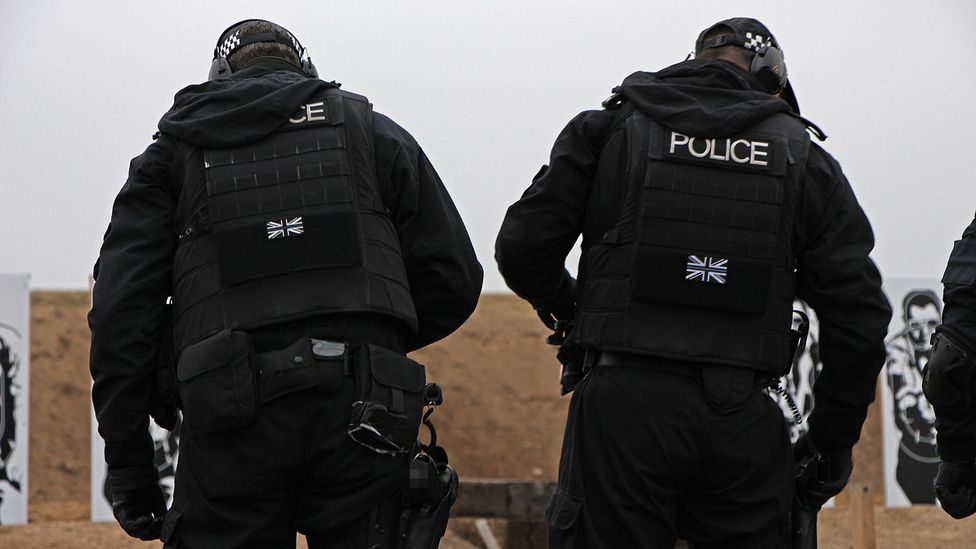 By Chris Baraniuk 4th May 2017
Since 2005, every nuclear power station in the UK has had armed protection – the Civil Nuclear Constabulary. But why does such security exist, and what does the job entail?
A

A car has just skidded to a halt. The driver, leaping onto the asphalt, is soon heading for a nearby building.

“Drop it!” roars a police officer as the man, wearing a camouflage-patterned jacket, smashes one of the car’s windows with a crowbar – at least, he pretends to. This runaway culprit is not a real threat but rather an instructor playing a role.

I’m standing in a disused army barracks in Surrey, UK among a dozen police officers. They are learning how to guard and protect the UK’s 14 high-security nuclear power stations. It’s a front-row seat to drills designed to hone a highly-trained group of law enforcers tasked with guarding against nuclear crime and terrorism.

“Drop it!” the officers shout again. In no time they’re upon the mock intruder and have pretended to taser him. As though it were all real, the instructor now lies on the ground, obediently subdued. A few minutes pass as the officers go through a routine of checking him over to ensure there are no further threats. The trainees and their instructors are watching attentively. The whole process lasts many minutes.

In a few moments, it will be picked apart by the group in great detail. This compulsory training is not for beginners, either. Many of these “trainees” are actually seasoned policemen and women. They are the Civil Nuclear Constabulary (CNC). 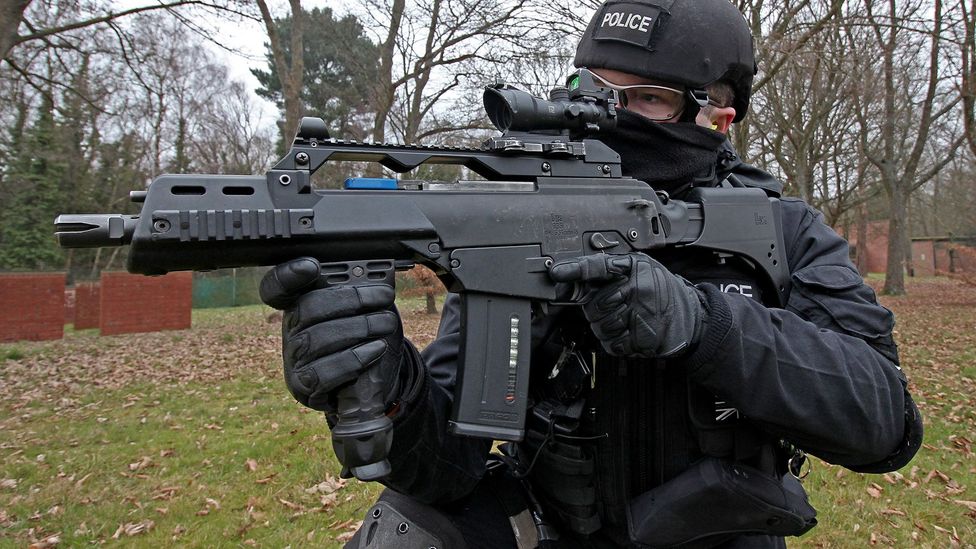 The job of Britain’s “nuclear police” is to protect nuclear power stations from threats. This involves preparing for events in which they might have to tackle potential intruders, for example. The worst-case scenario they prepare for is an attack that successfully targets a nuclear power station or results in the theft of nuclear material.

Many people in the UK are not aware that there are heavily armed police officers watching over nuclear power stations day in, day out, all year round

Another role-playing instructor blasts blank rounds from an AK47 – an inordinately loud weapon which produces long, bright orange flashes from the muzzle with each shot. Not far away, officers on a mock patrol respond accordingly, protecting themselves and returning fire, since it becomes clear the pretend assailant won’t be brought under control calmly. Before long, though, he raises his arms in the air and very visibly falls down on the ground to suggest that he has been wounded or killed. Again, the officers check him over.

During all of this, instructors watch, eagle-eyed. It’s their job to assess their trainees’ response to the situation. How they conduct themselves and the speed with which they secure the area will help to reveal how reactive a force this really is. 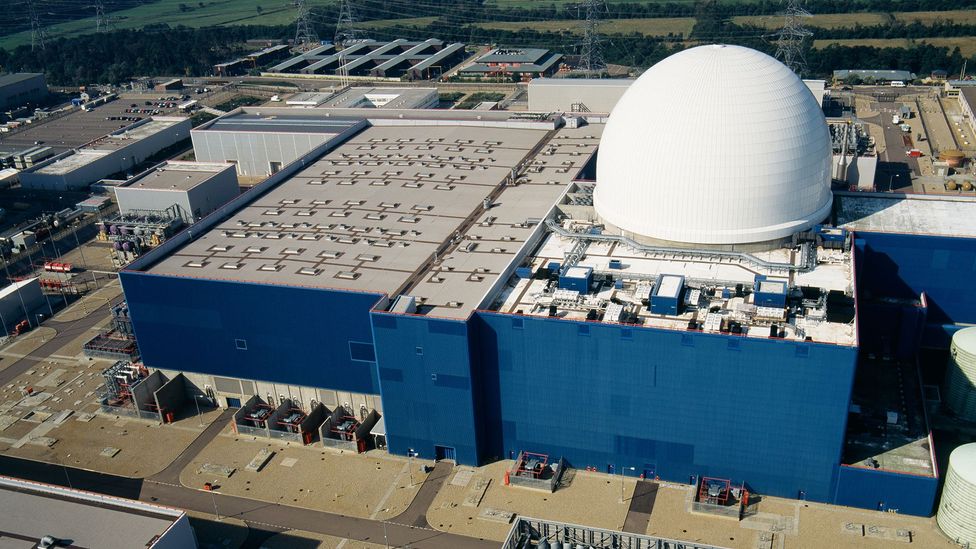 Around the world, nuclear power stations are carefully guarded.

There is supposed to be a high level of perimeter security at US plants, for instance, and physical patrols are also common. Security personnel at such locations have received more live-fire weapons training since 2009, according to the Nuclear Energy Institute in Washington DC.

But the level of security at nuclear power stations can change from time to time. In 2015, France raised protections at its facilities following the Paris attacks in November.

In the years after the 9/11 attacks in America, a decision was taken in the UK to increase security at British facilities. The old force, the Atomic Energy Authority Constabulary – which was established in 1955 and which did not protect power stations – was replaced in 2005 by the CNC. It stations armed officers at all non-military nuclear sites, a level of protection that hadn’t been present before.

The CNC, a relatively new force, has faced some scrutiny recently. Last year, a BBC freedom of information request revealed that there had been 130 security breaches over the past five years, including a gun that went missing during training and keys to a power station that were also lost. The power station in question had its locks changed and the keys were eventually found.

At the time, Chief Constable Mike Griffiths said the force was committed to “maintaining a security culture” and that, with regard to the gun that went missing, some procedures had been changed to prevent it happening again.

The kind of incidents these officers are preparing for in training today are actually extraordinarily rare.

“Have I ever taken a shot [as a CNC officer]? Personally, no I haven’t,” says one trainee in between drills. “Do I go along to incidents and deal with members of the public on a daily, weekly basis? Yeah, I do.”

Occasionally, while on patrol, officers may make arrests. There were 11 in 2015, and there were three offences recorded under the Terrorism Act in 2011.

He adds that he is based at Hinkley Point in Somerset. A new station in the area, Hinkley Point C, was recently approved for construction – though the decision was not without controversy. Securing power stations during nearby public protests against new nuclear power stations, for example, is another part of the job.

“They just want their voices heard,” acknowledges the officer. “Provided we give people the freedom to express themselves, there’s no issue.”

And yet, many people in the UK are not aware that there are heavily armed police officers watching over nuclear power stations day in, day out, all year round.

Armed police officers are not common in the UK. Out of the roughly 200,000 police officers in England and Wales, just 10,500 have firearms training. There are some exceptions to the rule elsewhere in the UK, however. Police Service of Northern Ireland (PSNI) officers, for example, are issued with guns as standard.

For this reason, CNC officers say they sometimes encounter locals who question why such heavily armed police are present. This is something the trainees claim they tackle with a conversation when possible, explaining their role. 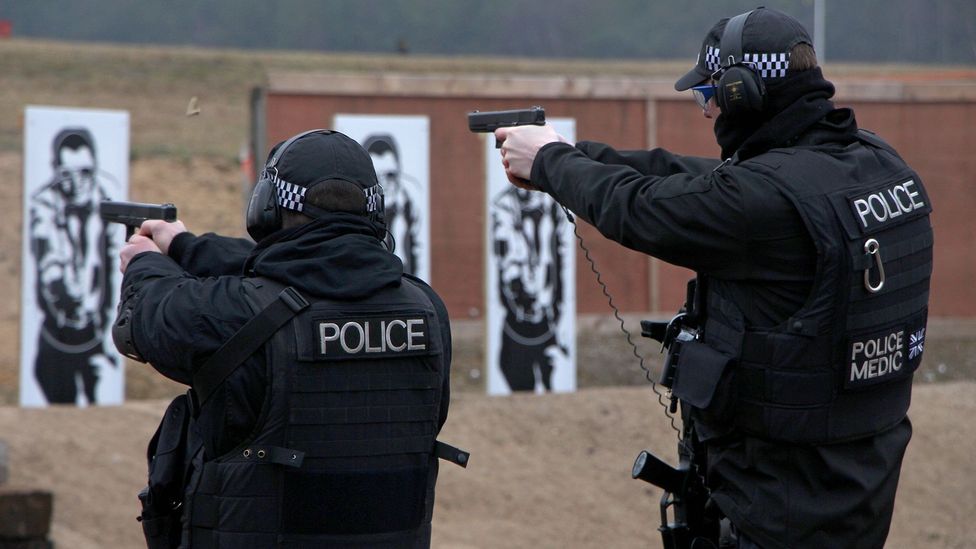 The CNC has many duties. They also accompany nuclear materials being transported within the UK and further afield, for example. On overseas trips, some of the ships carrying this cargo are equipped with machine guns on deck. Last year, the Strategic Escort Group chaperoned nuclear material across nearly 30,000 miles in total, worldwide. All officers are regularly checked for radiation and carry dosimeters – devices that monitor exposure to radiation – on their person at all times.

The CNC is paid for partly by the power companies that run nuclear sites. Annually, the CNC has a budget of around £100 million. According to a CNC spokesman, “very little” of the funding comes from the taxpayer. Overall, the funds have increased heartily in recent years, while many other UK police forces have experienced cuts. The Office for Nuclear Regulation Strategic Plan 2016-2020 mentions the threat of terrorism and state-sponsored espionage from other countries as examples of threats facing UK nuclear infrastructure.

Preventing a serious incident is what CNC officers train for

It’s a particularly cold morning in Surrey on the army barracks today, but many officers are used to patrols in all weather and in remote locations. Among its sites the CNC also counts, for example, the Dounreay nuclear facility right on the northern coast of Scotland, which is currently being decommissioned.

Officers in another group explain that they like to develop dialogue with locals when out on patrol. But that’s not always easy when you’re swathed in armour and weaponry.

“A lot of people’s knowledge of firearms comes from films,” says one.

A third points out that the duties of the role aren’t always obvious to outsiders. 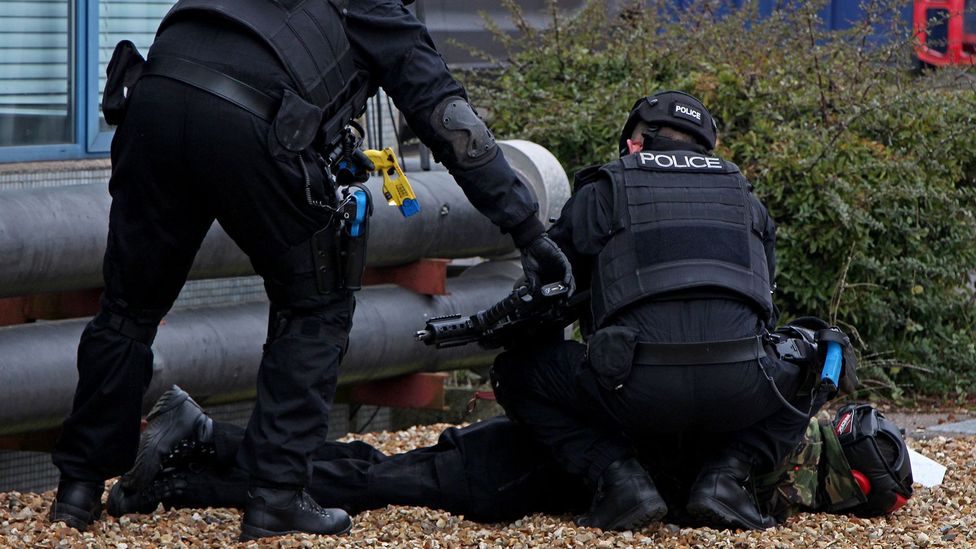 The UK has over a dozen nuclear power stations that need protecting from possible dangers, which is why the CNC exists (Credit: Chris Baraniuk)

“I think there’s a misunderstanding of what exactly we do sometimes,” he explains. “There’s a lot more to what we do than just standing on a gate with a gun.” A lot of is keeping watch over the delicate transport of nuclear materials.

And nuclear materials are, of course, hazardous. The officers explain that they are constantly checked for radiation exposure.

“That’s on us all the time,” explains one, pointing to his dosimeter. “And if we go into anywhere that has higher levels of stuff then we have monitors on us that actively tell us about what’s going on in the atmosphere around us.”

None here seem anxious about potential exposure to radiation. “I’m not bothered,” the officer adds.

All of the officers here seem to have joined from different backgrounds. One was previously in the prison service. Another says he is ex-military. And a third explains that this is his first law enforcement role.

“I was straight into it,” he begins, before being jokingly interrupted. His colleague quips “from school,” and strokes his colleague’s cheek, patronisingly. They all laugh.

“I think it’s quite good, high camaraderie between us all,” says an officer. “No one outside really understands it. And a lot of people move for the job because obviously you can’t just do it where you live.”

They all agree, training regularly is a favourite part of the role. “We would do it all day, every day if we could.”

It’s physically demanding, however, and officers are expected to maintain a high level of fitness. The CNC has “fitness champions” at all sites who are intended to support officers’ health and help them recover from any muscular skeletal injuries endured on the job. This is part of new measures to lower the average number of sickness absences reported by CNC officers – which has recently been above target levels.

Last year, the CNC lost a legal battle over new rules that mean officers will not be able to retire until they are 65, and eventually not until they are 68. This is because the CNC is not a police force in the usual sense – it is not primarily engaged in the investigation of crime or the maintenance of public order, and is under the supervision of the Secretary of State, not the Home Office. As such, it falls under the category of a public service organisation. Despite this, the Civil Nuclear Police Federation had argued that it is unreasonable to expect officers in this physically demanding role to work for so long.

But the vast majority of officers training here today are much younger than that. And they are enthusiastic – curious about the nuclear power stations they protect.

“A lot of us here, we deal with very sensitive stuff,” says one. The constant training is appreciated, his colleague adds.

The CNC officers training here today all stress that they know the magnitude of the responsibility they signed up for. And in today’s world, in which nuclear assets demand extremely high levels of protection, they are required to be mindful of serious threats.

What If...
1How Western civilisation could collapse
In Depth
2Why Hong Kong is overflowing with waste
Grand Challenges
3America's opioid addiction - explained
Grand Challenges
4The trend that may undermine democracy
Around the BBC