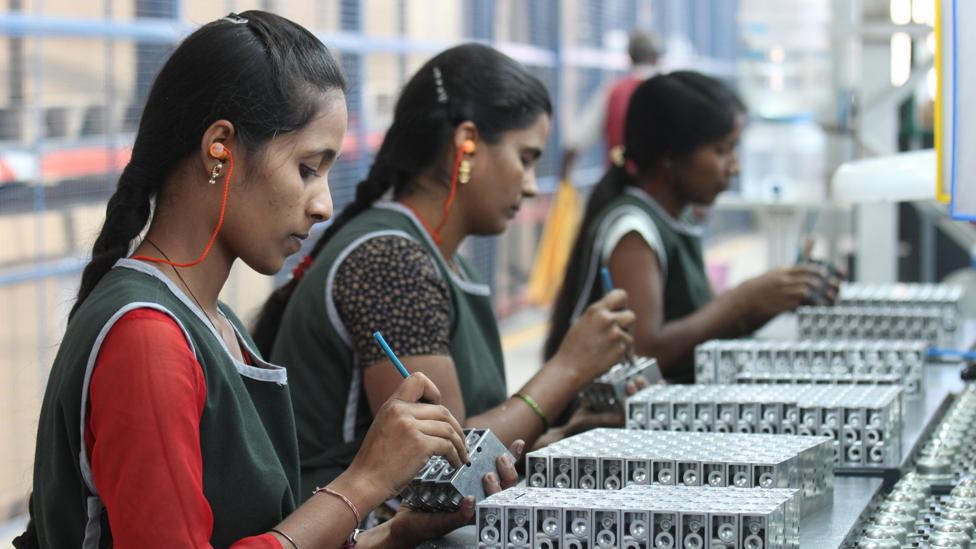 By Edd Gent 19th May 2017
Smart machines, robots, and other forms of automation could either be an economic poison or cure in a developing country like India – and this change will affect how businesses worldwide outsource work.
R

Ravi is one of thousands of Indian IT workers who will lose their jobs this year, caught between a slump in India’s previously booming IT industry and new technology threatening to replace human workers.

Until last month he worked at Cognizant Technology Solutions – a firm headquartered in the US but with the bulk of its workforce in India. The company is under pressure to cut costs and is expected to shed between 6,000 and 10,000 'underperformers' this year.

Market volatility and rising protectionism in countries like the USA, where much of India’s IT outsourcing work comes from, saw Cognizant’s revenue grow at its slowest pace in two decades last year, and its peers in the Indian IT industry are in the same boat.

But at the same time, rapidly improving automation technology is allowing software to carry out routine IT support work and repetitive back office tasks previously performed by humans – the very tasks global companies originally outsourced to India to take advantage of cheaper labour.

In February, Cognizant’s CFO said it would “aggressively” employ automation to “optimise” its services. Meanwhile, India’s third-largest IT firm, Infosys, said automation allowed it to shift 9,000 workers from low-skill jobs to more advanced projects, like machine learning and artificial intelligence, last year. Its competitor Wipro redeployed 3,200 in 2016, and predicts it will move another 4,500 this year.

Yet this has been accompanied by a significant slowing in hiring. IT body Nasscom’s annual review predicted a 20-to-25% reduction in jobs in the industry over the next three years.

“Cognizant has not conducted any layoffs,” a Cognizant spokesperson said. “New machines and technologies are about helping cut costs, improve efficiencies, and increase sophistication in building and delivering services. They are not about altogether replacing the human element, but about elevating the role people play and the value they bring to their roles.”

But it can be hard to pinpoint exactly whose jobs have been lost to automation. Researchers in the UK, for example, have shown that some roles in today’s global economy are more at risk than others.

Ravi, whose name has been changed, worked as a software tester – a role particularly vulnerable to automated takeover. "In testing, already it has been introduced and it's coming in very fast,” he says. "If a job requires four manual testers, automation can reduce it to one.” 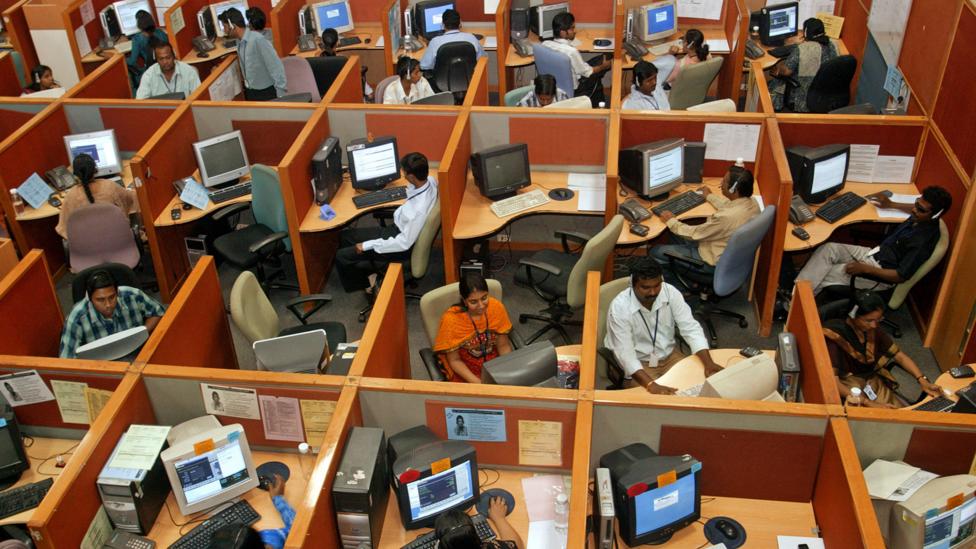 International companies have long outsourced IT tasks to call centres in India to save money - but now those human centres may be replaced by robots (Credit: Alamy Stock Photo)

He’s now job hunting, but says opportunities for the kind of work he was doing before are limited and he will probably have to adapt: take a course on automated software testing and then try to secure a position. He worries this may be a repeating pattern.

"Maybe after five years some new technologies are coming and we have to learn those, too,” he says.

Since the 1990s Indian firms have carried out back office tasks, and IT services like data entry, running call centres and testing software for foreign companies at cut-price rates by throwing cheap labour at them. But as machines become adept at this repetitive, rule-based work, the low-skill jobs – where the bulk of Indian IT workers are employed – are the most at risk.

“It’s been happening for the last two or three years in an accelerated fashion,” says Gopinathan Padmanabhan, head of innovation at IT company Mphasis. “It’s a reality you can't shy away from.”

This shift will go hand-in-hand with new opportunities in emerging areas – data science, artificial intelligence and big data – but these will require new skills and probably fewer employees.

"They will have to find new roles and train themselves to become relevant in the new age,” says Padmanabhan. “And we're not talking about too far into the future… the next three to five years.”

Of course, losing jobs to automation is a concern across the developed world. But India’s case is unique.

A stable job at one of the big IT companies is a major aspiration for many Indians, which probably explains why fears of technological unemployment have featured so prominently in newspapers here in recent months.

But despite contributing 9.3% of the country’s GDP, according to Nasscom, the IT industry only employs 3.7 million of the nation’s roughly half a billion working adults. So how big of a threat is it actually to the Indian workforce?

India is already struggling to create jobs amid rapid growth. Its working-age population increased by 300 million between 1991 and 2013, according to UN figures, but the number of people employed only rose by 140 million.

Still, robots replacing jobs en masse is unrealistic in the medium term in India – or anywhere else – but the effects are already being felt. Last September, Indian textiles giant Raymond said it would replace 10,000 jobs with robots over three years.

Union leader Vinodh Kumar works at BMW’s factory in Chennai – India’s automotive hub. His facility isn’t in danger of automation, but he knows union leaders at Hyundai’s plant where the entire body shop and most of the paint shop was automated.

Other sectors at risk include pharmaceuticals, food and beverages, logistics and security. 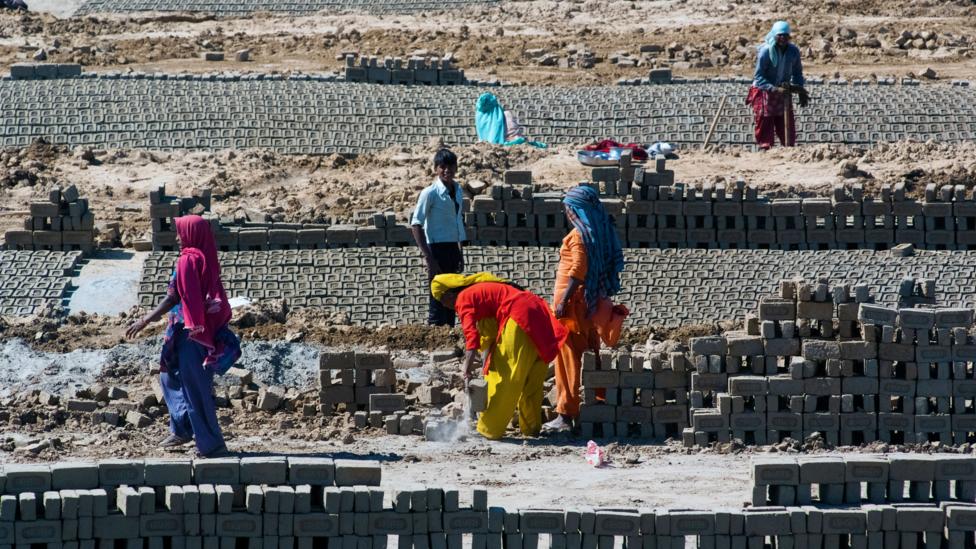 Repetitive, labourious tasks, like the brick-laying seen here in Uttar Pradesh, are especially at risk of being replaced with smart machines (Credit: Alamy Stock Photo)

Mohandas Pai, former CFO of Infosys, says it is unlikely to impact high-skill jobs like architects or high-quality coders, or even lower-end jobs in the service industry like restaurant staff and hairdressers.

"The fat middle is at threat, which is rule-based work. Like work in banks, work in offices, work in factories,” he says.

‘Hollowing out’ the middle class

The World Bank’s 2016 World Development Report noted a global trend towards “hollowing out” of the labour force. As technology streamlines routine tasks, middle-skill jobs like clerical workers and machine operators decline while both high-skill and low-skill ones increase.

And in developing nations like India, that can be a huge problem.

"Those middle-skill jobs have traditionally been the path out of poverty,” says World Bank senior economist Indhira Santos. “So that polarisation into the labour market could translate into a polarisation of society and income.”

This trend isn’t down to technology alone – globalisation and urbanisation contribute. But pulling away “the ladder to the middle class”, as the report puts it, could be particularly damaging in a developing country like India.

After all, there is a reason why companies are turning to new technologies. “Automation is an imperative to improve competitiveness, quality and efficiency,” says CEO of Siemens’ India Sunil Mathur. That helps compete against cheap imports, boost exports and increases domestic demand and therefore jobs, he says.

“You have to automate to be globally competent,” he says. “If we don't improve our infrastructure, our productivity we will not have a chance to compete globally.”

The Butler robot can pick up to 600 items an hour. That eclipses the 100 items a human worker can manage

Grey Orange builds ‘Butler’ robots that fetch and store products and ‘Sorters’ that automatically scan and sort packages in the warehouses of e-commerce and logistics giants like Flipkart, Jabong and DTDC.

Kohli says the Butler can pick up to 600 items an hour. That eclipses the 100 items a human worker can manage – invaluable efficiency in a country where supply chain costs are double those of Western countries.

Kohli claims job numbers in their facilities have stayed level, but attrition has reduced.

“This labour is just brute labour,” he says. “Even though they're doing jobs, they never get out of poverty. When they start using these kinds of collaborative robots in the mix they work better, more efficiently and are happier with their jobs."

Heads of IBM Research India Sriram Raghavan agrees that in a developing country like India, automation normally fills gaps rather than replacing people. India has 330,000 fewer doctors than the WHO’s minimum recommendation, but Raghavan says automation can help plug this kind of talent shortage. Smart machines combined with the internet could allow doctors and teachers to provide personalised services to many more people than they can today.

The plight of IT workers like Ravi, though, demonstrates that automation is already encroaching on areas without gaps to be filled. Pai says India has the luxury of time compared to developed countries, as labour will remain cheaper than automation for a decade, and huge unmet demand for infrastructure and services can produce lots of jobs.

But the World Bank report highlights an ever-accelerating race between skills and technology and that countries like India need to act now to future-proof their populations’ capabilities.

With automation taking on the routine tasks at the heart of today’s workplace, the jobs of the future will focus on skills like critical thinking, collaboration and creativity.

The jobs of the future will focus on skills like critical thinking, collaboration and creativity

But things are changing. He leads a government-sponsored pilot where professors from leading colleges use virtual labs to teach students at struggling engineering colleges. And start-ups are introducing extra-curricular robotics classes teaching problem-solving skills vital for future jobs. 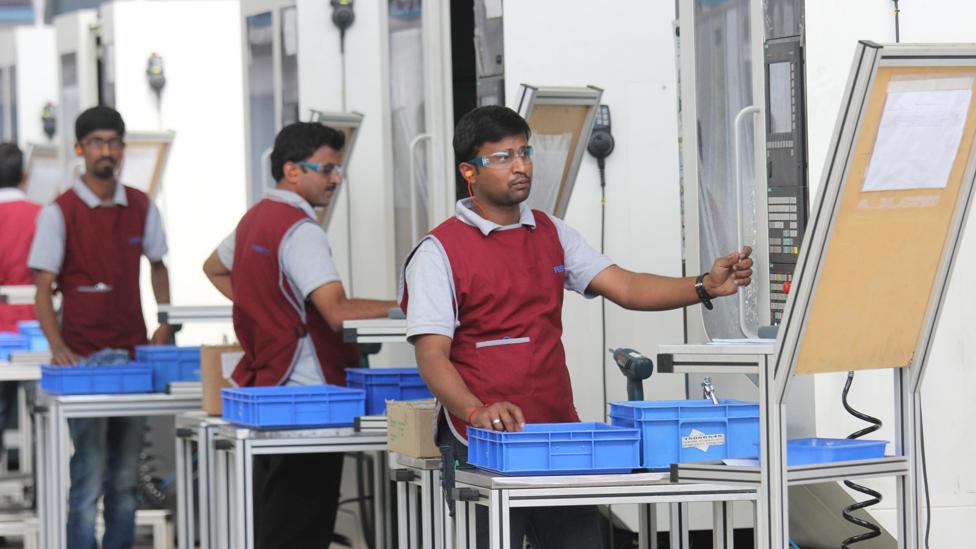 Most importantly, he says the country’s young population is sharp, adaptable, and future-oriented.

"If automation displaces one thing they move to another,” he says. “They are recognising the need to continually upskill.”

IBM’s Raghavan says smart machines that automatically analyse students' performance and preferences can help guide them through this fast-moving terrain by combining data on their skills with job opportunities and available courses.

He says: "Then it’s less about a race, but getting people on a journey. Maybe the skill profile changes every five years rather than every 10, but at the same time technology is helping navigate that landscape."

That may sound like blue-sky thinking, but in February, Microsoft and LinkedIn announced Project Sangam – a programme providing LinkedIn training, with progress automatically added to profiles so companies can shortlist candidates, as well as personalised job recommendations.

Jhunjhunwala thinks India’s development challenges are so large, it needs all the help it can get. And fighting automation is futile anyway.

"The changes going on in the world, including automation, are not something decided by us – but it's going to happen," he says. "We don’t want to be passive and let automation impact us. We want to develop something with this automation."

And in the race between technology and skills – as India tries to keep pace with the very technology that helped launch its economy on the world stage – he thinks the country has a secret weapon: a deeper value placed on education than in the West. After all, the pinnacle of India’s ancient caste system was the educated Brahmin priest – not the Kshatriya warrior.

"It's part of our Indian heritage," says Pai. "India is the only civilisation in the world where the educated gurus were placed on the totem pole higher than the king. In all other nations, soldiers and might ruled and knowledge bowed to the mighty. In India, knowledge is above the might of the state."