Loading
Medical Myths | Health
Are you washing and drying your hands wrong?
Share using EmailShare on TwitterShare on FacebookShare on LinkedinShare on Whatsapp 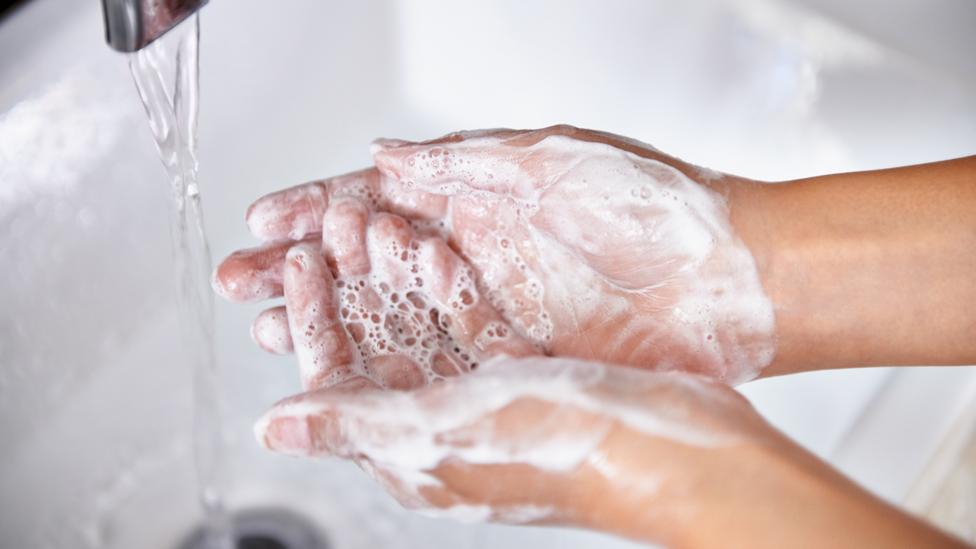 By Claudia Hammond 22nd May 2017
Hot water or cold? Soap or handwash? Towels or hot air dryers? The post-bathroom ritual is a vital task – but is there a best way to do it?
N

Now wash your hands! It sounds straightforward, but it isn’t. Although there’s plenty of evidence that washing your hands after you’ve been to the loo, before eating, or after travelling on public transport can reduce the spread of disease, only 5% of people wash their hands properly all the time.

An observational study of more than 3,000 people found 10% left public toilets without washing them at all and even if they did, 33% didn’t use soap. This matters because, unfortunately, we can’t resist touching our faces, allowing germs to spread nicely from our hands to our noses and mouths, where they can get into the body. Researchers in Brazil and the US found that we touch surfaces in public spaces an average of 3.3 times an hour and we touch our mouths or noses about 3.6 times an hour.

So it’s clear that we need to wash our hands properly. The problem is there are plenty of myths out there about how to do it.

Does the water need to be hot to get your hands clean?

In a survey of 500 adults in the US, 69% believed that the temperature of the water has an impact on the effectiveness of handwashing. It is true that heat can kill bacteria (which is why we need to make sure certain foods are piping hot when we eat them), but the water would need to be scalding for this to happen on your skin. Salmonella, for example, can survive temperatures of 55C for more than 10 minutes. If you washed your hands in water this hot you would have serious burns before 30 seconds were up.

To find out exactly how many microbes remain on our hands after washing in water ranging in temperature from 4.4C to 50C (39.9F to 122F), researchers in Florida used a method known as the glove-juice technique (though it’s not a juice you’d want to drink). Volunteers’ hands were wiped with a bacterial soup or with raw minced beef. Then their hands were washed in water of a certain temperature before they put on latex gloves and a special solution was poured into the gloves. After a minute of hand massage through the glove to make sure all those bacteria got into the liquid, the glove juice was collected using a pipette, ready for testing in the lab. They found that whether the water was cold, hot or middling made no statistically significant difference to the quantity of bacteria remaining on people’s hands. 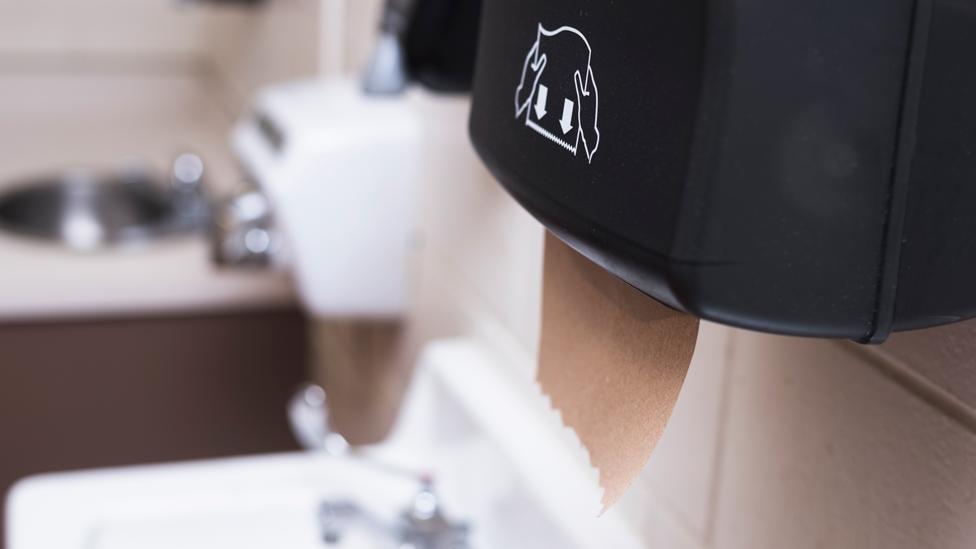 Most research suggests one-use paper towels are the most hygienic approach (Credit: iStock)

But before the hot taps are ripped out of public toilets, we shouldn’t forget the vagaries of human behaviour. In these experiments the hand washing was carefully timed, but in real life if the water is very hot or very cold, then we tend not to wash our hands for long. Just showing our hands the water isn’t enough, and some nice warm water might encourage us to tarry a while by the wash basin.

A lot more research has been conducted regarding this one. Back in 2007 a review of the best studies concluded that the substance mostly commonly found in anti-bacterial hand washes at the time – triclosan – did not reduce the number of bacteria remaining on people’s hands after washing any more than soap did, nor was it any better than soap at preventing symptoms of an infection. A more recent review in 2015 came to the same conclusions.

Meanwhile a combination of laboratory studies showing that triclosan might increase the risk of anti-bacterial resistance and that it might affect hormone levels in animals, has led to a ban of triclosan in hand washes in the US and in the European Union.

So it’s back to soap and water of whatever temperature you prefer.

Do you need to dry your hands afterwards?

When you’re in a hurry it’s tempting to let your hands drip dry. That’s fine if you don’t touch anything on your way out of the bathroom. If you do, you could pick up germs because they transfer to your hands more easily if they’re wet.

You also miss out on the benefits of drying your hands, which itself can lower the level of any remaining microbes left on your hands.

There’s a lot of debate surrounding this one. Most publications come down in favour of paper towels which get used just once. For a start it can be quicker than waiting for a traditional electric hand dryer to do the job. In a study from New Zealand (which, it must be pointed out, was funded by New Zealand Towel Service) people needed to wait 45 seconds for a dryer to evaporate the excess moisture on their hands. Most of us don’t want to hang around that long.

Now of course there’s a new generation of jet dryers which work faster. They have been shown to dry hands just as quickly and effectively as paper towels. Ten seconds with a towel or a jet dryer leaves hands equally dry. 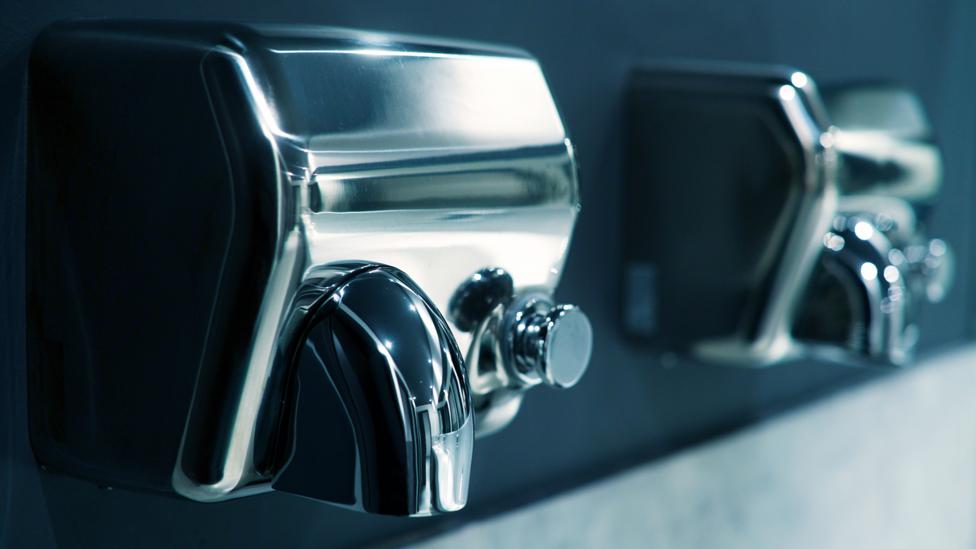 But the jet dryers have come under criticism, with the suggestion that they are so powerful that they could spread germs around the room. A study conducted at Westminster University found the most powerful hand dryers can spread a virus as far as 1.5m across the room and a later study increased this to three metres. But this isn’t cut and dried. Most of these studies have been funded by towel industry, who makes a living selling towels and not electric dryers. Then again, the authors are open about this and the research is published in peer-reviewed journals.

The next step is for more research conducted in real public toilets, rather than in the lab.

And again, our preferences need to be taken into account. Any method that encourages people to dry their hands, rather than leaving them wet, is an improvement. Making toilets nicer could make a difference. The study which observed more than 3,000 people in a college town in the US, found that if the toilets were clean and well-kept, people were more likely to stop and wash their hands properly. When the sinks were dirty, they just wanted to get out of there.

Whichever way you choose to wash and dry your hands, the main finding from research is to do it for longer than you think. To work up a good lather and to the palms and back of your hands as well as cleaning between your fingers, under your nails, and up to your wrists takes at least 15-30 seconds. Try singing Happy Birthday twice (just not out loud if it's a public bathroom).

How do nurses wash their hands? Watch the video below to follow their comprehensive method, inspired by an episode of the BBC World Service radio programme Crowdscience. Listen to the full episode called 'Can we be too clean?'