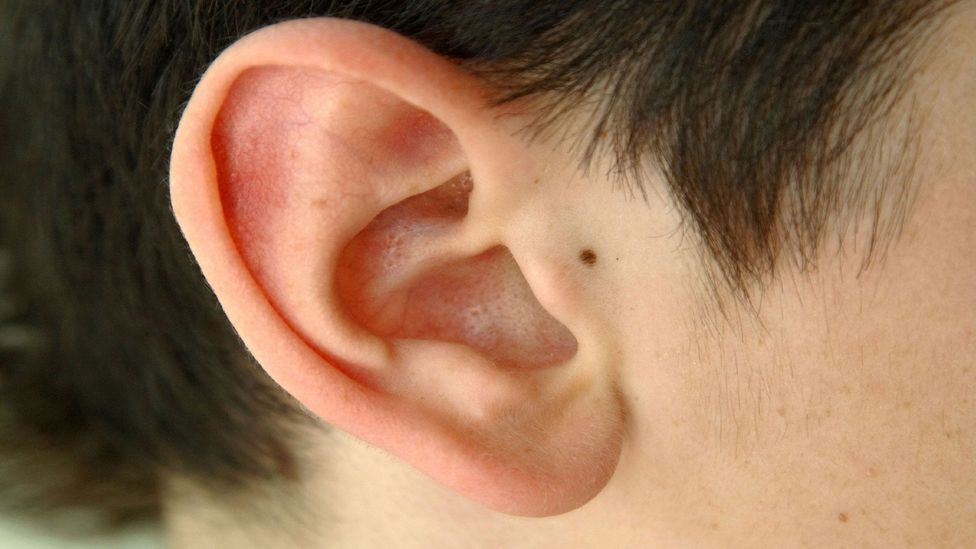 By Richard Gray 29th May 2017
Microsoft has built a chamber so quiet, you can hear the grind of your bones – and it’s helping to fine-tune the next-generation of electronic goods.
I

If LeSalle Munroe stands still for a few moments in his “office”, something unsettling can happen – he can hear the blood rushing around his body and his eyes squelch as they move in his skull.

While many people work in places filled with the tip-tap of keyboards, the hubbub of chatter from colleagues and a constant hum of computers, Munroe is surrounded by almost total silence. His office is the quietest place on the planet.

The specially constructed chamber is hidden in the depths of Building 87 at Microsoft’s headquarters in Redmond, Washington, where the firm’s hardware laboratories are based. Products like the Surface computers, Xbox and Hololens have all been developed here. Microsoft’s engineers built the room – known as an anechoic chamber – to help them test new equipment they were developing and in 2015 it set the official world record for silence when the background noise level inside was measured at an ear-straining -20.6 decibels.

To put that in context, a human whisper is about 30 decibels while the sound of someone breathing normally comes in at just 10 decibels. It gets close to the limit of what should be possible to achieve without creating a vacuum – the noise produced by air molecules colliding with each other at room temperature is estimated to be about -24 decibels. The limit of human hearing is thought to be around 0 decibels, although just because our ears cannot pick it up, it does not mean no sound present, hence it is possible to get a negative value. 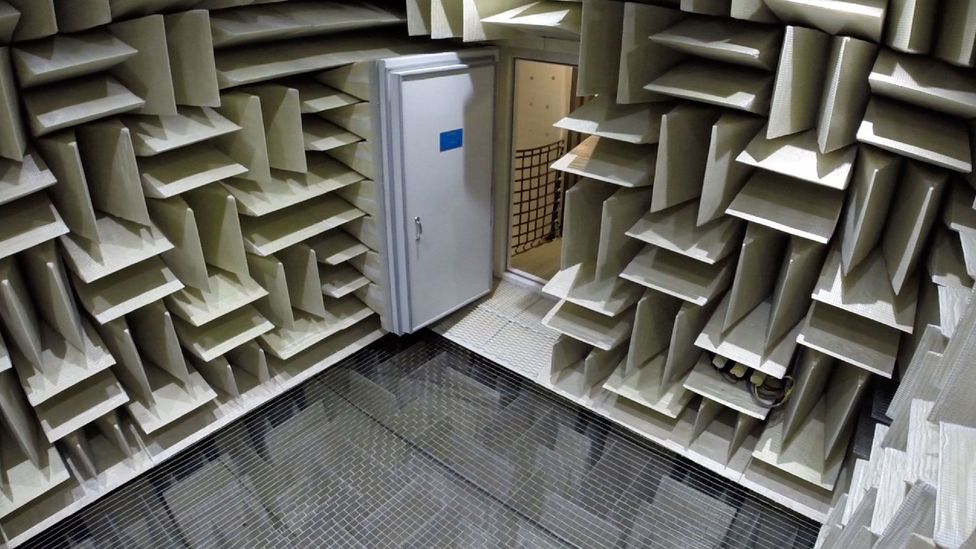 The anechoic chamber has been sealed from any potential sources of noise (Credit: Microsoft)

It took almost two years to design and build the chamber where Munroe’s team now spend their days putting Microsoft’s technology through its paces. Even finding a suitable building took nearly eight months of testing to find one quiet enough to house it.

If a jet was taking off just outside the building, you would hear little more than a whisper inside the final concrete bunker

The chamber sits at the heart of six concrete onion layers that help to block out sounds from the outside world. This nest of rooms within rooms – each with walls up to 12 inches thick – helps to cut the noise reaching the chamber by around 110 decibels. If a jet was taking off just outside the building, you would hear little more than a whisper inside the final concrete bunker where the chamber is.

“This insulation makes a huge difference,” explains Hundraj Gopal, principal human factors engineer at Microsoft who led the team that built the anechoic chamber. The chamber itself floats on top of 68 vibration damping springs mounted on its own separate foundation slab.

“This means the chamber doesn’t make direct contact with the building around it at any point,” says Gopal. “It is why it took us more than a year and a half to build this thing. I often joke that I aged six years in that time.”

The anechoic chamber is a cube measuring 21ft (6.36m) in each direction. Each of its six surfaces is lined with clusters of 4ft-long (1.2m) wedges of sound absorbing foam, helping to prevent any echoes bouncing off the walls from any sound produced inside. A floor made from steel cables – the same kind used to stop fighter jets as they land on aircraft carriers – are knitted together like a trampoline net above the foam wedges on the bottom of the chamber.

Seals around the doors of the chamber and the rooms surrounding it also help to keep noise from leaking in. Gopal and his team even suspended a specially designed air conditioning system and sprinkler system in the 4ft (1.2m) gap between the chamber and the concrete wall of the room it sits within. 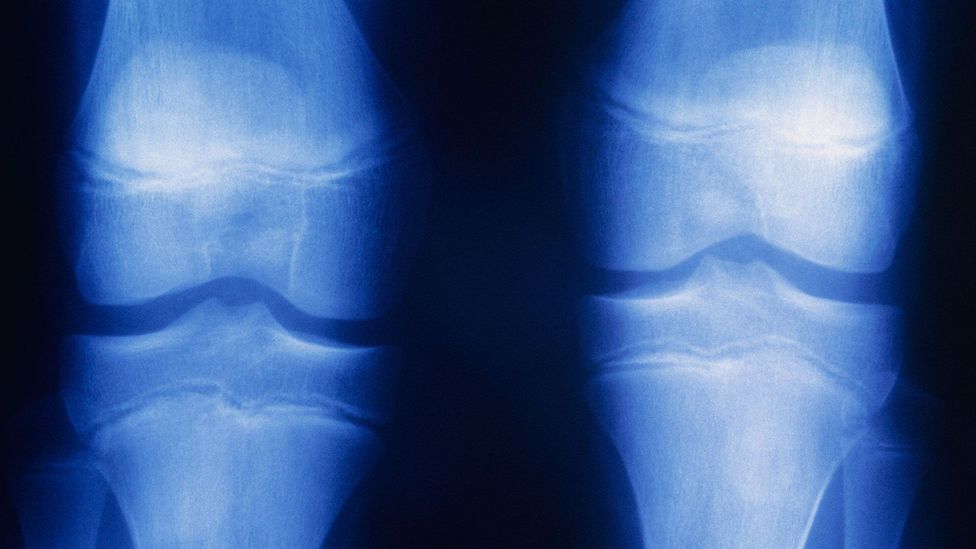 Microsoft's anechoic chamber is so quiet, you can reportedly hear the grinding of your own joints as you move (Credit Alamy)

“The chamber itself is one that is commercially available so anyone can buy it,” says Gopal. But they paid extra attention to any minor feature that might bring unwanted sounds into the room. “The secret is in the extra time and energy we put into isolating the sprinkler system, putting in door seals, a specialised air supply, staggering the openings and the way cables go in. There is a lot that went around this chamber that makes it unique.”

The result is a spot that is staggeringly quiet. Before officials from the Guinness Book of Records arrived to take measurements in Gopal’s anechoic chamber the world record for the quietest spot on Earth was held by Orfield Laboratories in Minneapolis, which had an anechoic chamber that had noise levels of -9.4 decibels. The Microsoft lab smashed that. “We didn’t set out to build the quietest chamber on the planet,” says Gopal. “My intention was to have something that was at least zero decibels, which is the lowest the average human can hear.”

You would think that a place so quiet would also be peaceful. But for those who spend any time in there, it is far from the case. Gopal often gives visitors to Microsoft a tour of the audio laboratories, which includes a trip inside the anechoic chamber – and most find the experience very uncomfortable. “Some people want out within a few seconds,” he confides. “They say they just can’t be in there. It unsettles almost everybody. They can hear people breathing on the other side of the room and hear stomachs gurgling. A small number of people feel dizzy.”

This might seem like a strange reaction when most of us spend our lives seeking a bit of respite from the noise we are bombarded with every day. But Peter Suedfeld, a psychologist at the University of British Columbia who has studied sensory deprivation, compares stepping into one of these chambers to being like entering a dark room. “We are used to every sound producing a small echo from the world around us,” he points out. “In these chambers, there is just dead sound. It is just like going into a dark room, at first you cannot see anything but over time your eyes adapt.”

Cut off from the daily noises that usually drown out our body functions, it becomes possible to hear the grind of bones as your joints move

Cut off from the daily noises that usually drown out our body functions, it becomes possible to hear the grind of bones as your joints move, the ringing of tinnitus can become deafening. But Gopal says there are some people who enjoy the experience of being inside his chamber.

“There are people who do love it and say it is meditative,” he reveals. “They find it relaxing. But the longest I’ve seen someone stay inside for is an hour, and that was to raise money for charity. I think if you spent too much time in there it would drive you crazy. Every swallow you make is really loud.” 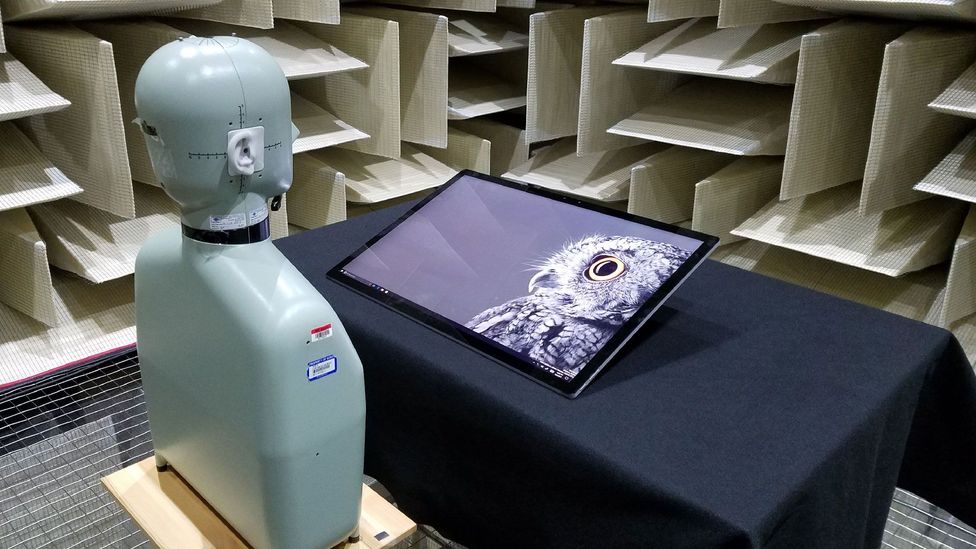 Microsoft's anechoic chamber helps to test the workings of its electronics (Credit: Microsoft)

For Munroe, this silence has a far more constructive use than simply eavesdropping on the grumblings and gurglings of the human body. Instead, they listen in on electronic equipment while it is in use. They are looking for tiny vibrations that are produced by capacitors on electronic circuit boards as current passes through them. These can make the components on the board produce annoying hums that can be off-putting for consumers.

“We try to find out where on the board a noise is coming from and what strategies we can use to mitigate it,” explains Munroe. “For example, we have tried putting capacitors in different configurations so the vibrations cancel each other out.”

They also look at other components on computers that can make noises – from the power supply to the cooling fan and the sound from your display as you increase the backlighting. But not all of their work is about trying to find unpleasant noises. They also help to tune the sound that different components should make. “We look at keyboard noise,” says Munroe. “Getting a keyboard to sound a particular way is a critical thing. We do experiments on different types of materials for the keys, different spring mechanisms – all to get the right feel and sound from a keyboard.”

Speakers also get put through their paces in the laboratory as it allows the team to use the sensitive equipment to look for any distortion or clipping of frequencies. The performance of microphones in products can also be tested in a similar way.

Recently, engineers have also been using the chamber to test the performance of new technologies such as Microsoft’s artificial intelligence assistant Cortana and developing techniques to replicate three-dimensional sound for its virtual reality HoloLens display.

The team has also had a number of applications from researchers who want to use the chamber to conduct biomedical research. There is some research, for example, that suggests short-term sensory deprivation can induce temporary psychotic episodes and hallucinations, which could help in the study of schizophrenia.

Gopal is reluctant to branch into medical and behavioural studies. Putting patients into such an unusual environment would likely require volumes of special legal clearance. The laboratory’s busy testing schedule also makes it difficult to find time for such studies. On a personal level, however, the real power of the chamber for Munroe and Gopal comes when they leave after a spell inside.

“When you open the door it is almost like a waterfall of sound hitting your ears,” says Munroe. “It is like stepping out into a different world. You hear things that you wouldn’t normally notice. It gives you a new perspective.”