Loading
Untold World | Aircraft
Can a new airship unlock the Amazon?
Share using EmailShare on TwitterShare on FacebookShare on Linkedin 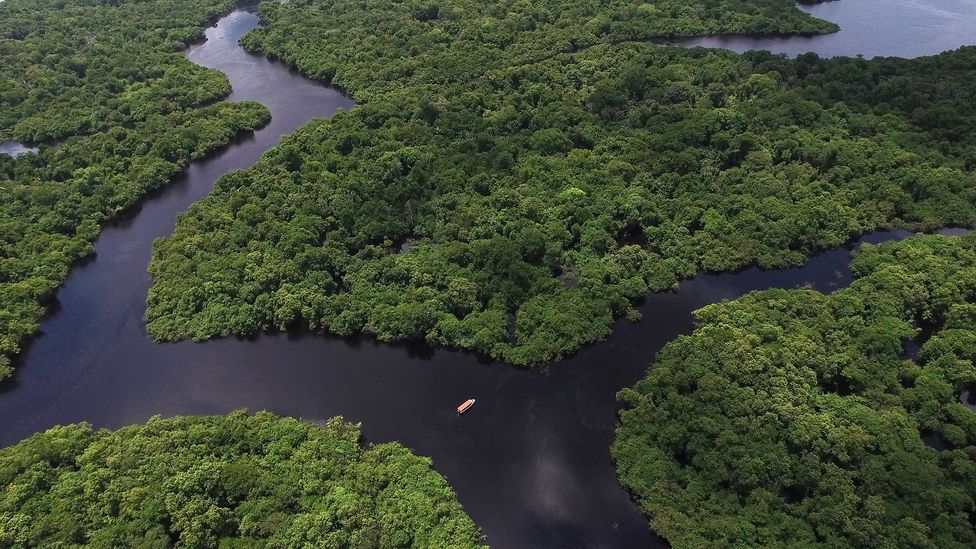 By Mark Piesing 11th July 2017
The vast jungle interior of Brazil is a difficult place to reach – there are few roads, and travelling by river is very slow. Could airships be the key to supplying remote Amazonian outposts?
S

Standing in the middle of what used to be a sugar cane field four miles from the south Brazilian city of São Carlos is a huge arched hangar. Inside the purpose-built structure is an aviation first for Brazil – a new design that could change the way the country develops.

It also happens to be a form of flying machine that has all but disappeared since the 1930s. It is the first manned airship ever built in Brazil. It has already flown in private and is now due to make its first public flight this July. This is part of a £35m ($44.6m) project to make Brazil a centre of the airship industry. The company behind it has even built a new factory ready to manufacture a fleet of airships.

The ADB-3-3 looks like the kind of airship you find in a faded photo in a history book - or flying over the Super Bowl. It is about the size of a small Airbus airliner and underneath its huge helium-filled envelope is a gondola that can take six people, and two engines that can move it through the air at a maximum speed of 55mph (95km/h).

It is the prototype of the smallest of a range of airships that its developer, Airship do Brasil (ADB), hopes will soon lead to a giant design that can carry 30 tonnes of cargo – or even a small tank. Their first goal is to get the ADB-3-3 certified safe to fly commercially and into production. Then in 2018 they hope to begin development of the cargo airship. 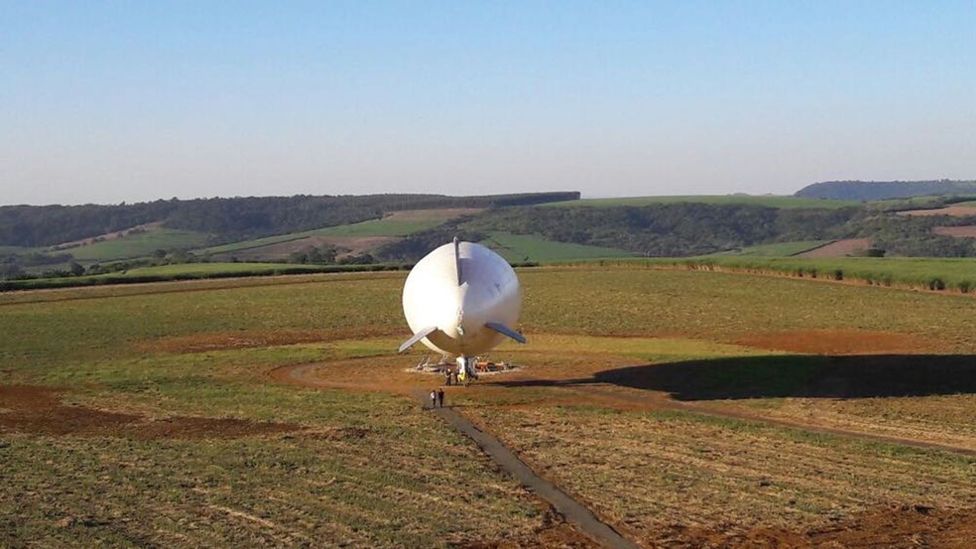 The Brazilian airship could be used to bring supplies to remote jungle outposts (Credit: Airship Do Brasil)

Airships like the ADB-3-3 are known as lighter-than-air vehicle because, like a children’s party balloon, they float into the sky by means of helium gas. Faster hybrid airships, such as the Airlander 10 (known less formally as the ‘Flying bum’), are in fact part-plane, part airship. Like a plane, they get some of their lift from their wing, but the downside with this design is that they usually work best when they have a short runway to take off from.

Why are the Brazilians only now finding an enthusiasm for the airship, some 80 years after the rest of the world turned their back on it? It is partly thanks to the vision of Marcelo Felippes, a former officer in the Brazilian army. It is his determination that led to the creation of the ADB after he had seen how difficult it was to move heavy cargo through the Amazon, where roads are almost non-existent and trying to move heavy loads by boat is an arduous task.

“During the 1980s I was doing a research project for the army in the Amazon and after spending a lot of time in the jungle I decided that airships were the solution to the army’s transportation problem,” says Felippes. “The army thought that airships belonged to the past, but I had to show them how new technology and different materials meant that they belonged to the future.

“Our company is the first in Latin America to build a manned airship, but we thought very deeply before deciding what kind of airship we wanted to build. It’s slower, but we went for the traditional design because it can hover while delivering a piece of machinery in the jungle where there isn’t any space for a hybrid to land.

“It would also take a lot of time and money to certify a hybrid airship [to be safe to fly commercially] because they are a completely new design.”

Felippes was inspired to build an airship by the largely forgotten role Brazil has played in the history of flight – and in particular, the triumphs of national hero Alberto Santos-Dumont.

From his base in Paris at the turn of the 20thCentury, Santos-Dumont experimented with primitive airship designs that looked like a balloon with a man on a bicycle underneath. In October 1901 he made history by flying round the Eiffel Tower in an airship.

And there was more. Arguably, Santos-Dumont beat the Wright brothers to the first powered heavier-than-air flight. On 23 October 1906 he completed the first officially confirmed powered flight of more than 25m (82ft). The Wright brothers had beaten him into the air, but there were no officials present to authenticate the flight.

In 1932, the year Santos-Dumont died, the giant German airship, the Graf Zeppelin, began a scheduled air service across the Atlantic from Germany to Brazil. Later it was joined by the even larger Hindenburg. Today, the tethering mast that kept them anchored to the ground still stands on the Torre do Zeppelin in Recife, northern Brazil. It is the site of the first airship base in South America, and the massive hangar built in Rio de Janeiro to house the gargantuan Graf Zeppelin is still used by the Brazilian Air Force.

The day after the crash of the Hindenburg in 1937, which marked the end of the golden age of the airship, the Graf Zeppelin arrived in Frankfurt after a four-day-long flight from Rio. It was the last time an airship flew an international passenger flight.

Six years later, during World War Two, 17 American airships made the epic flight to Brazil to hunt down German submarines, escort convoys and rescue air crews that crashed in the sea or jungle; two of these airships were even stationed in the old Zeppelin hangar that had housed the German airship.

Now airships are back in Brazil and this time they are made In Brazil – well, almost.

Airship do Brazil was founded in 2005. To begin with, Felippes concentrated on building ‘aerostats’ to develop the skills needed to make an airship. Aerostats are unmanned airships tethered to the ground rather like wartime barrage balloons. Two of the aerostats he built were used in the 2016 Rio Olympic Games.

His engineers also designed what could be called a ‘balloon crane’, which works by using a large round balloon attached to the ground as an aerial winch to lift heavy loads – like an electrical transformer – into the sky. This is then moved slowly to where it is needed.

But designing and building an airship took Felippes much longer than he had hoped – and a new approach was needed.

In the late 1980s the now-defunct US Lighter Than Air Corporation built an airship called the 138S. After successfully flying scientific research missions it was retired in 1997. A few years later the Science Applications International Corporation (SAIC) now known as Leidos bought everything they needed from the LTA Corp to build the airship from scratch. They wanted to modernise it for manned or unmanned operations for the US government, but the project was cancelled. 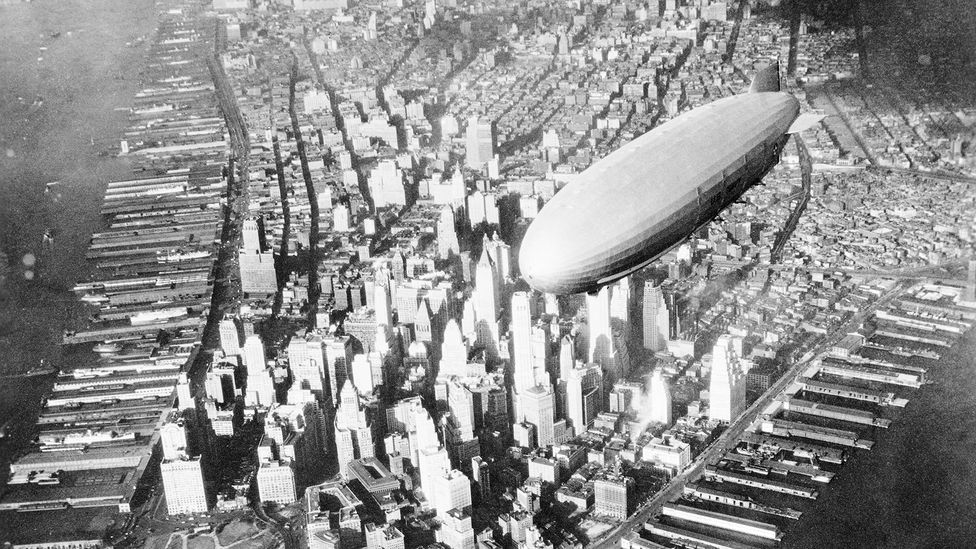 The US Navy based some of its airships in Brazil during World War Two (Credit: Science Photo Library)

However, that wasn’t the end of the 138S. The plans, type certificate and tools to build and fly the airship were then sold to Airship Brazil – allowing them to build the ADB-3-3.

“What attracted us to this design was the possibility to have the full sets of drawings and engineering reports for a very low price,” says Daniel DM Goncalves, the company’s chief technical officer. “We haven’t adapted the design so far, so it is basically the 138S airship. It is a prototype airship and it is the driver for the certified airship that we will build next.”

“Airship do Brasil was looking for another manufacturer to mentor them, but no one wanted to train a potential competitor,” says Michael Phillips, Senior Business Development and Programme Manager for Special Operations Solutions, who was instrumental in managing key aspects of the purchase of the airship for ADB. “What they had realised was that they had to first practise building a simple airship before they built a 30-tonne one – and that simple airship was the 138S.

Brazil has lots of reasons to want to use airships. They have so much hard-to-get-to territory that they cannot afford to build roads, railways and airports everywhere they need them – Ron D Hochstetler, aviation expert

“Why choose such a conservative design? Well, a hybrid is high risk compared to a proven design that has been flying for over 100 years.”

For Ron D Hochstetler, Vice Chairman, American Institute of Aeronautics and Astronautics (AIAA) the biggest challenge to realising Marcelo Felippes’ vision of airships flying over the Amazon is yet to come.

“Brazil has lots of reasons to want to use airships. They have so much hard-to-get-to territory that they cannot afford to build roads, railways and airports everywhere they need them. It’s the tarmac, the rails and the airport buildings that cost all the money. With airships the majority of the infrastructure investment is in the ship itself.

“And Airship do Brasil are steaming along nicely, but the jump from a small demonstrator airship to a large cargo-carrying airship is perhaps the biggest challenge for any airship company – and no one has done it successfully since the 1930s.”

The idea of an airship hovering over the jungle and lowering machinery to the ground has raised eyebrows. However, Hochstetler isn’t sure that the critics are right. 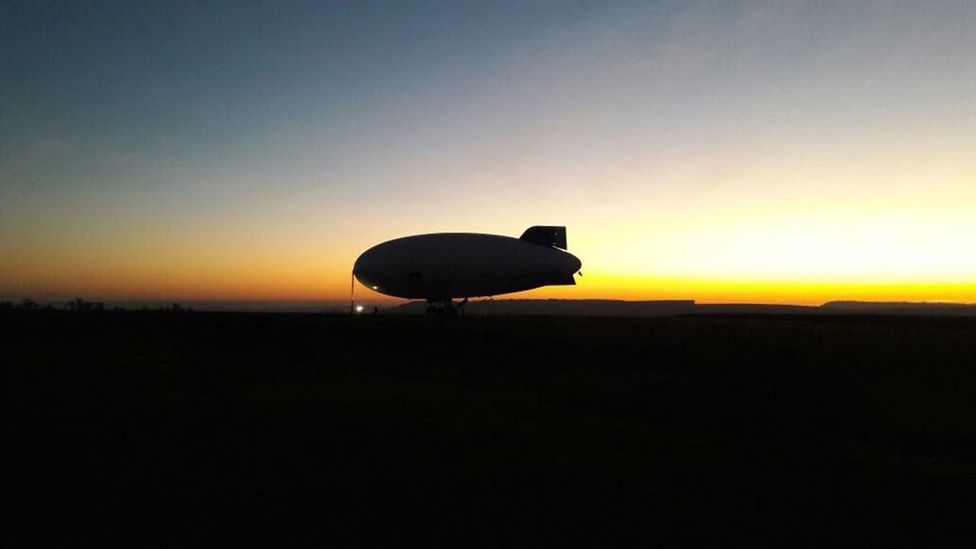 The Brazilian airship is based on an earlier design made in the US (Credit: Airship Do Brasil)

“Hovering in an airship over a single spot in the jungle is actually easier than in a helicopter if you use modern computer-controlled systems. The moment your cargo touches the ground the airship is lighter and will shoot up, but you can compensate with more thrust from your engines until you have enough rocks bagged up to compensate. That may sound onerous, but there is lots of rock, dirt and water that can be used as ballast – or cargo that will need to be flown back.

“Today we are already two to three years into designing the large cargo airship we want to build,” says Marcelo Felippes, “but building the small airship has been a wonderful education for us. If we didn’t have this experience it would have been impossible to build the bigger airship.”

“We can definitely feel the connection with the pioneering work of Alberto Santos-Dumont,” says Fabricio De Avellar, Airship do Brasil’s commercial manager. “We feel part of his heritage by continuing his work.”