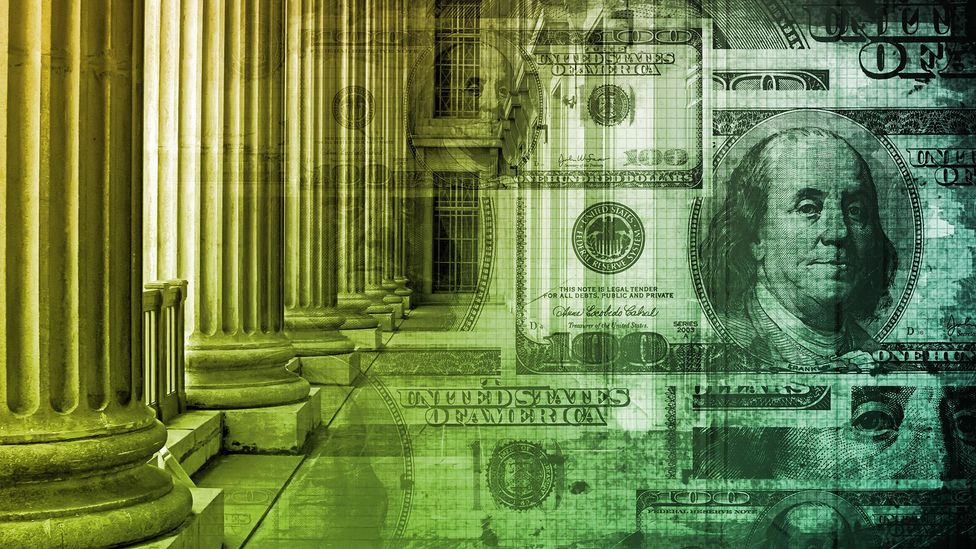 By Sophia Smith Galer 11th July 2020
The story of how the myth exploded reveals how fake stories spread today and the secrets behind the psychology of their fiercest proponents.

BBC Future has brought you in-depth and rigorous stories to help you navigate the current pandemic, but we know that’s not all you want to read. So now we’re dedicating a series to help you escape. We’ll be revisiting our most popular features from the last three years in our Lockdown Longreads.

You’ll find everything from the story about the world’s greatest space mission to the truth about whether our cats really love us, the epic hunt to bring illegal fishermen to justice and the small team which brings long-buried World War Two tanks back to life. What you won’t find is any reference to, well, you-know-what. Enjoy.

It’s the conspiracy theory to dwarf all conspiracy theories. A smorgasbord of every other intrigue under the sun, the Illuminati are the supposed overlords controlling the world’s affairs, operating secretly as they seek to establish a New World Order.

But this far-fetched paranoia all started with a playful work of fiction in the 1960s. What does this tell us about our readiness to believe what we read and hear – and what can the Illuminati myth reveal about the fake news and stories we continue to be influenced by today?

When most people try to look into the secret society’s history, they find themselves in Germany with the Enlightenment-era Order of the Illuminati. It was a Bavarian secret society, founded in 1776, for intellectuals to privately group together and oppose the religious and elitist influence over daily life. It included several well-known progressives at the time but, along with the Freemasons, they found themselves gradually outlawed by conservative and Christian critics and the group faded out of existence. 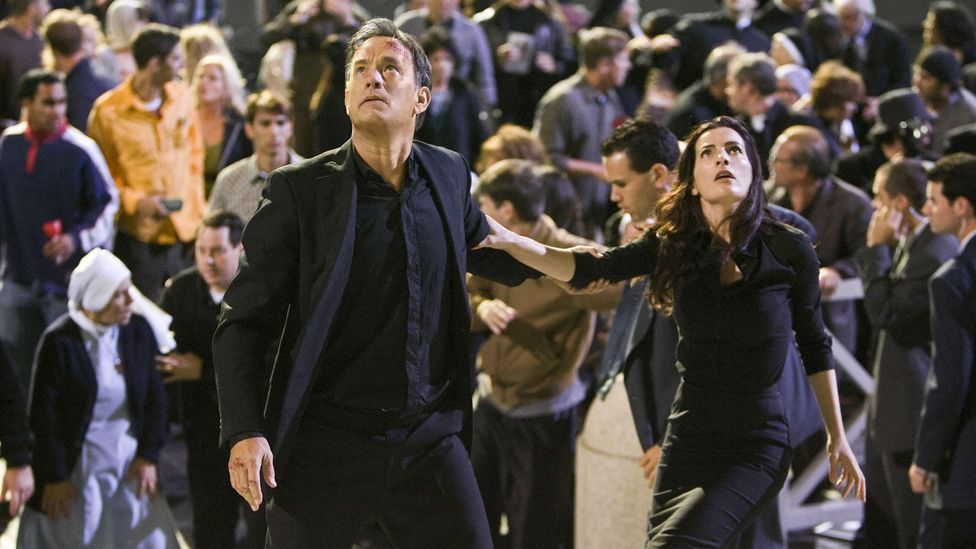 Films like Angels and Demons have brought the concept of the Illuminati into popular consciousness (Credit: Alamy)

That is, until the 1960s. The Illuminati that we’ve come to hear about today is hardly influenced by the Bavarians at all, as I learned from author and broadcaster David Bramwell, a man who has dedicated himself to documenting the origins of the myth. Instead, an era of counter-culture mania, LSD and interest in Eastern philosophy is largely responsible for the group’s (totally unsubstantiated) modern incarnation. It all began somewhere amid the Summer of Love and the hippie phenomenon, when a small, printed text emerged: Principia Discordia.

The book was, in a nutshell, a parody text for a parody faith – Discordianism – conjured up by enthusiastic anarchists and thinkers to bid its readers to worship Eris, goddess of chaos. The Discordian movement was ultimately a collective that wished to cause civil disobedience, practical jokes and hoaxes.

The text itself never amounted to anything more than a counter-culture curiosity, but one of the tenets of the faith – that such miscreant activities could bring about social change and force individuals to question the parameters of reality – was immortalised by one writer, Robert Anton Wilson.

It’s an idealistic means of getting people to wake up to the suggested realities that they inhabit – David Bramwell, author

According to Bramwell, Wilson and one of the authors of the Principia Discordia, Kerry Thornley, “decided that the world was becoming too authoritarian, too tight, too closed, too controlled”. They wanted to bring chaos back into society to shake things up, and “the way to do that was to spread disinformation. To disseminate misinformation through all portals – through counter culture, through the mainstream media, through whatever means. And they decided they would do that initially by telling stories about the Illuminati.”

At the time, Wilson worked for the men’s magazine Playboy. He and Thornley started sending in fake letters from readers talking about this secret, elite organisation called the Illuminati. Then they would send in more letters – to contradict the letters they had just written. 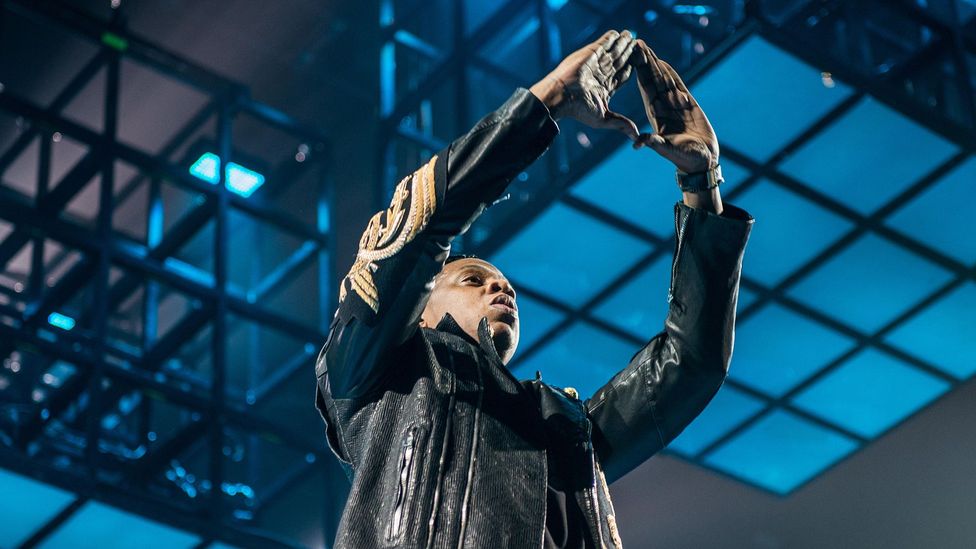 Jay Z is one famous hip hop star to raise their hands into the alleged Illuminati triangle symbol at concerts (Credit: Alamy)

“So, the concept behind this was that if you give enough contrary points of view on a story, in theory – idealistically – the population at large start looking at these things and think, ‘hang on a minute’,” says Bramwell.  “They ask themselves, ‘Can I trust how the information is presented to me?’ It’s an idealistic means of getting people to wake up to the suggested realities that they inhabit – which of course didn’t happen quite in the way they were hoping.”

The chaos of the Illuminati myth did indeed travel far and wide – Wilson and another Playboy writer wrote The Illuminatus! Trilogy which attributed the ‘cover-ups’ of our times – such as who shot John F Kennedy – to the Illuminati. The books became such a surprise cult success that they were made into a stage play in Liverpool, launching the careers of British actors Bill Nighy and Jim Broadbent.

Today, it’s one of the world’s most widely punted conspiracy theories

British electronic band The KLF also called themselves The Justified Ancients of Mu Mu, named after the band of Discordians that infiltrate the Illuminati in Wilson’s trilogy as they were inspired by the religion’s anarchic ideology. Then, an Illuminati role-playing card game appeared in 1975 which imprinted its mystical world of secret societies onto a whole generation.

Today, it’s one of the world’s most widely punted conspiracy theories; even celebrities like Jay-Z and Beyoncé have taken on the symbolism of the group themselves, raising their hands into the Illuminati triangle at concerts. It’s hardly instigated the mind-blowing epiphany – the realisation that it’s all fake – which the proponents of Discordianism had originally intended.

The 60s culture of mini-publishers and zines seems terrifically distant now from today’s globalised, hyper-connected internet, and it has undeniably been the internet’s propensity to share and propagate Illuminati rumours on websites like 4chan and Reddit that has brought the idea the fame it has today.

But we live in a world that is full of conspiracy theories and, more importantly, conspiracy theory believers; in 2015, political scientists discovered that about half of the general public in the USA endorse at least one conspiracy theory. These include anything from the Illuminati to the Obama ‘birther’ conspiracy, or the widely held belief that 9/11 was an inside job carried out by US intelligence services. 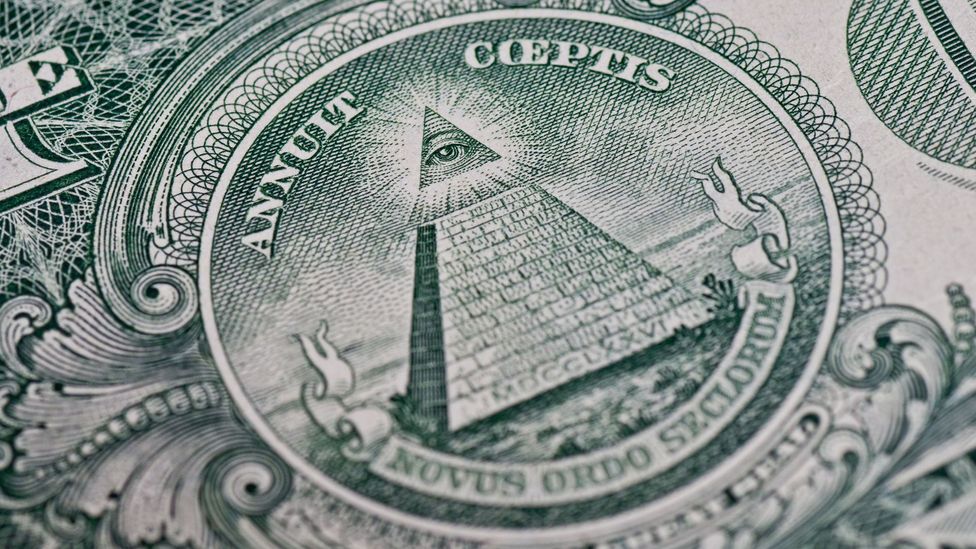 “There’s no one profile of a conspiracy theorist,” says Viren Swami, professor of social psychology at Anglia Ruskin University. “There are different perspectives of why people believe in these theories, and they’re not necessarily mutually exclusive – so the simplest form of explanation is that people who believe in conspiracy theories are suffering from some sort of psychopathology.”

Another conclusion researchers have drawn to is that these theories could provide rational ways of understanding events that are confusing or threatening to self esteem. “They give you a very simple explanation,” adds Swami, who published research in 2016 that found believers in conspiracy theories are more likely to be suffering from stressful experiences than non-believers. Other psychologists also discovered last year that people with higher levels of education are less likely to believe in conspiracy theories.

The big change now is that politicians, particularly Donald Trump, are starting to use conspiracies to mobilise support – Viren Swami, Anglia Ruskin University

“The big change now is that politicians, particularly Donald Trump, are starting to use conspiracies to mobilise support.”

The 45th President of the United States was a notorious “birther”, regularly speaking to the media about how President Obama wasn’t really born in Hawaii. He also accused various US states of voter fraud after the 2016 election and his campaign team were responsible for propagating now debunked fabricated stories such as Pizzagate and the Bowling Green Massacre.

I asked Swami if he thought that this shift in conspiracy theory usage could affect politics long term. “People could become disengaged with mainstream politics if they believe in conspiracy theories,” said Swami. “They’re much more likely to engage with fringe politics. They’re also much more likely to engage with racist, xenophobic and extremist views.” 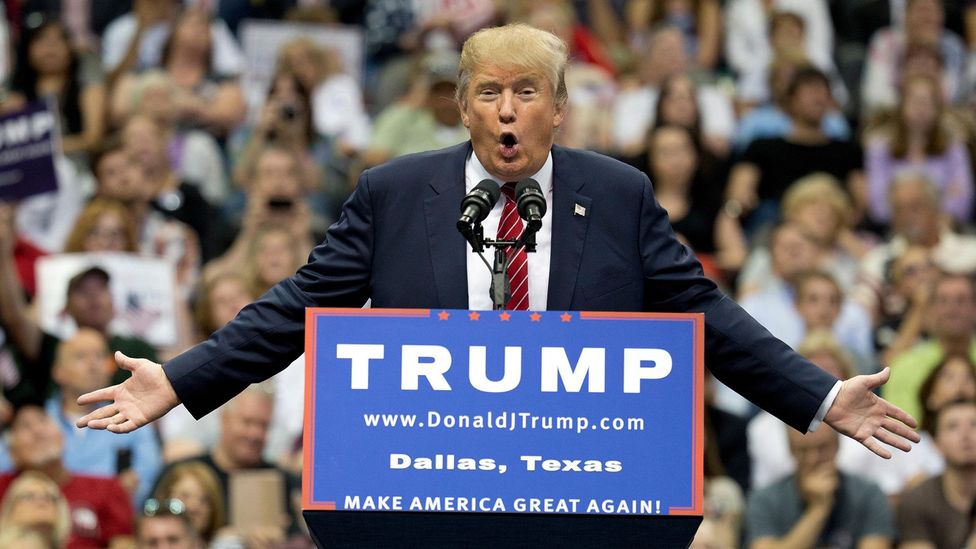 The idea of an untouchable, secretive elite must resonate with people that feel left behind and powerless; Trump said he wanted to represent these people, especially the once-powerful industrial landscape of America’s Rust Belt. Yet instead of feeling better represented in the halls of power by a non-politician like themselves – and theoretically being less likely to feel powerless and vulnerable to conspiracies – it seems like some in America are more likely to believe in stories like the Illuminati more than ever before.

“If Wilson was alive today, he’d be part delighted, part shocked”, says David Bramwell. “As far as they thought in the 60s, culture was a little too tight. At present, it feels like things are loose. They’re unravelling.

“Perhaps more stability will come as people fight against ‘fake news’ and propaganda. We’re starting to understand how social media is feeding us ideas we want to believe. Echo chambers.”

Between internet forums, nods in popular culture and humankind’s generally uninhibited capacity for imagination, today’s truth-finders and fact checkers might debunk the Illuminati myth for good.