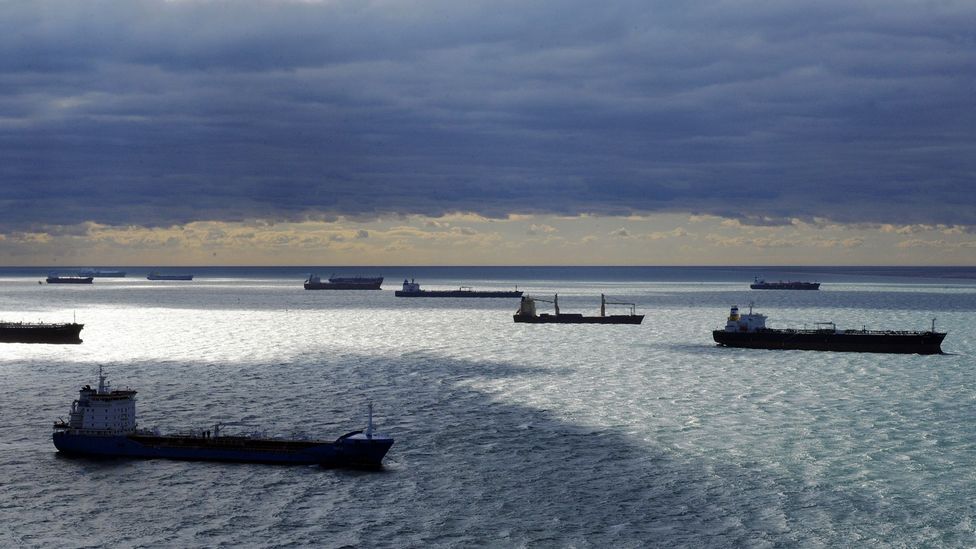 By Chris Baraniuk 22nd August 2017
The ocean may be huge, and navigation technology may be advanced – but the conditions are still in place for ocean collisions like the one between a tanker and US navy destroyer this week. What can be done to prevent future disasters?
I

It happened in the middle of the night, off the coast of Malaysia. A large tanker filled with nearly 12,000 tonnes of oil smashed into the side of US Navy destroyer the John S McCain, named after the father and grandfather of US senator John McCain.

Ten sailors from the McCain are missing but the vessel is now at Changi Naval Base in Singapore. It’s an extraordinary and tragic collision, but all the more-so because a remarkably similar accident happened just two months ago. The USS Fitzgerald was struck by a large container ship off the coast of Japan. Seven US sailors died.

The ships involved in these recent incidents are large and well-fitted with radar and navigation systems. There are also GPS tracking, automatic identification systems (AIS) and radio communications. How could such collisions have happened? And what can be done to prevent them happening again?

“Provided you are keeping a radar watch and a visual lookout, then collisions are avoidable,” says Peter Roberts, directory of military sciences at the Royal United Services Institute (RUSI).

We don’t know the details of the latest collision, but sometimes it is left to the instruments to warn of impending collision, rather than members of the crew.

Roberts says he has travelled on commercial ships where sometimes there is no-one on the bridge at all. “An alarm is going off on the radar and they’re reliant on that alarm waking whoever is on watch,” he says. Still, two major accidents involving navy ships in as many months is extraordinary, he adds. “It’s very, very rare,” he says.

It could, of course, just be a deeply unfortunate coincidence. But some are asking whether foul-play or sabotage was involved – were navigation systems hacked to increase the likelihood of a collision, for instance? 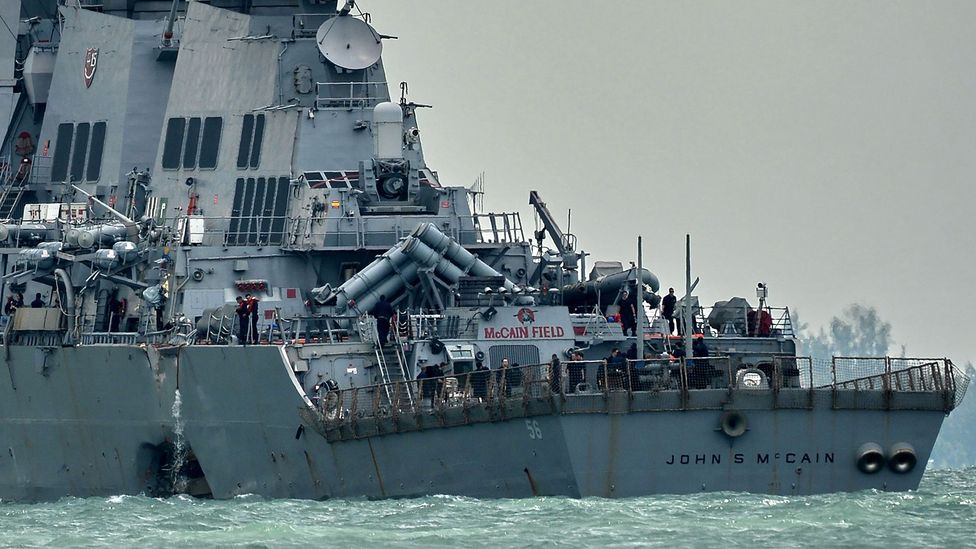 There has been at least one report of potential GPS position spoofing affecting ships in the Black Sea in recent months, which has led to concern among a few observers that some nation states may be hacking ships in an effort to throw them off course.

There is no evidence yet for this being a factor in the USS Fitzgerald or John S McCain cases – despite the conspiracy theories floating around the web. But Roberts says that the scenario is worth considering.

“You’ve got to keep every possibility open at the moment,” he says.

It’s important to remember that large ships do get involved in accidents from time to time, even though the cases are not always newsworthy enough to attract coverage. Just a day or two before the McCain accident, for example, two cargo ships collided off the coast of Fujian in China and there are reports of seafarers having been killed as a result.

The seas are becoming more and more crowded, and the global number of commercial ships continues to grow

When such accidents occur, investigators often find that human error was the ultimate cause rather than anything more nefarious, says Henrik Uth at Danish firm Survey Association, a maritime surveyor contracted by insurers of ships. He adds that his firm’s own investigations have found many instances in which the crew has actually helped to avoid dangerous near-misses.

“It’s easy to blame the captain for when it goes wrong, but we tend to forget to compliment him for all the times he saved the vessel from imminent danger,” says Uth.

It’s not just collisions that threaten ships and their crew, either. Right now, a British ship, the MV Cheshire – loaded with many thousands of tonnes of fertiliser – is on fire and has been drifting in seas near the Canary Islands for days. The crew had to be airlifted to safety.

The seas are becoming more and more crowded, and the global number of commercial ships continues to grow. According to the UK government, there were around 58,000 vessels in the world trading fleet at the end of 2016.

The size of the fleet, if measured by weight, has doubled since 2004.

So are collisions only going to become more frequent?

Uth suggests that since the financial crisis of 2008, many shipping companies have faced tighter margins and may have underinvested in crews as a result. “They need to find the right crew and retain them,” he explains. “The crew has to get to know the vessel because it is a sophisticated piece of hardware.”

And on any large ship, a typical crew often comprises a mix of different languages, nationalities and safety cultures, he adds, making the job of keeping the vessel safe all the trickier.

“Instead of looking at the instruments, you have to look out the window to see how the situation actually evolves,” he explains. “Maybe today there’s a bit of a fixation on instruments.”

Maybe today there’s a bit of a fixation on instruments instead of looking out the window – Aron Soerensen, navigator

But he points out that maritime organisations have tried to come up with ways of reducing the likelihood of collisions happening. One idea he mentions is the separation of traffic – neatly co-ordinating streams of vessels travelling through a busy strait, for example, by moving them into distinct lanes heading in the same direction.

The size of the world's shipping fleet has doubled, by weight, since 2004 (Credit: Getty Images)

The first such “traffic separation scheme” was set up in the Dover Strait in 1967 and there are now around 100 worldwide.

It’s in everyone’s interests to avoid a collision. Not least because under international regulations, both parties share liability for such accidents. In other words, captains are obligated to avoid colliding with another vessel even if their own ship has every right to be at its current position.

While the recent accidents are troubling, there is good news from the industry too, Uth says. He points out that the number of total losses – for example when a ship sinks – has been falling year-on-year recently. 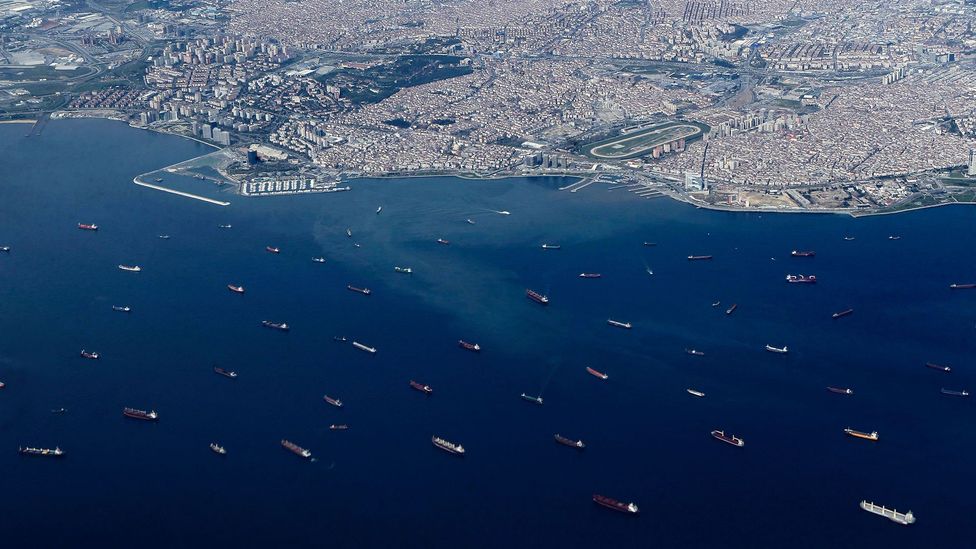 According to data from insurance firm Allianz, there were 85 total losses of large ships recorded in 2016, a fall of 16% on the previous year. Of all 85, just one total loss was the result of a collision.

There’s no doubt that technology has in many ways contributed to safety in the shipping industry – but life as a seafarer remains dangerous. As more and more large vessels plough the world’s seas, the need to captain these behemoths has not evaporated, rather, it has grown ever more pressing.