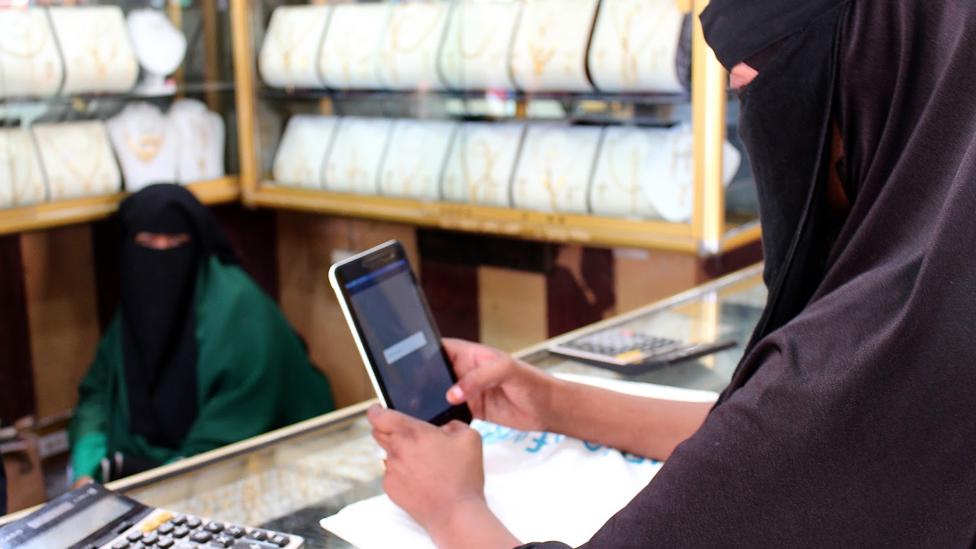 By Matthew Vickery 13th September 2017
Somaliland, a self-declared republic in East Africa, faces high illiteracy and has an economy ravaged by a civil war. But it might just become the first cashless society on Earth.

Half a dozen men crowd round one of the many small colourful wooden shacks off a main street in Hargeisa, Somaliland, shouting and arguing over the quality of khat – a mild narcotic that has been likened to both coffee and cocaine – that they’ve just been hastily handed by the vendor.

Customers quickly come and go, grabbing bundles of the green leafy, legal plant that they deem good enough before punching digits into phones and disappearing as quickly as they came.

“We need to do everything quickly, and paying with cash here is slow,” Omar, one of the khat sellers says as he chews on the green leafy plant himself. “It keeps people calm if they can get their khat quickly.”

No cash is transferred, and there’s not a credit card in sight. But customers haven’t got their daily khat fix for free; they’ve paid using their mobiles, transferring money on the sandy Somali street in seconds with little more than a mobile phone and a few numbers.

There are not many things tiny Somaliland can claim to be a world leader in, but cashless payments might be one. 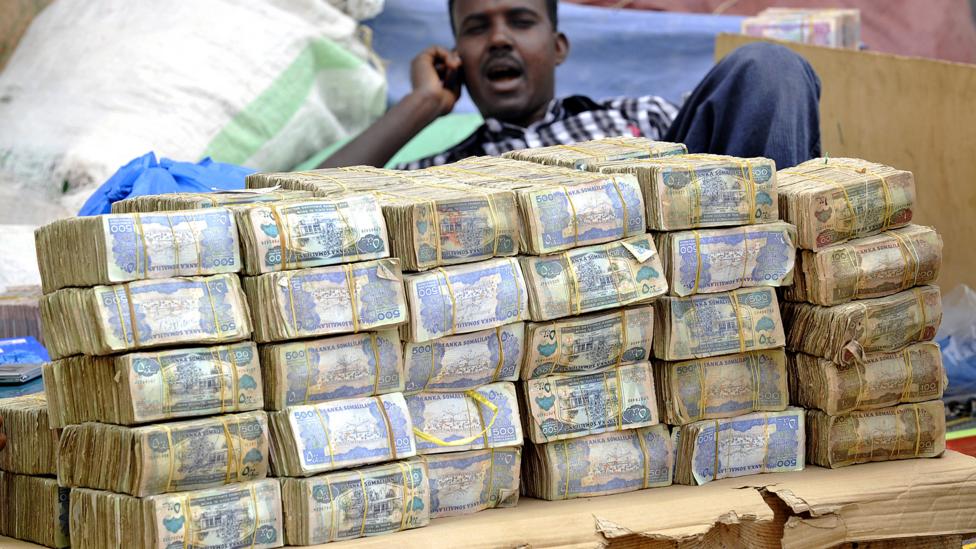 One US dollar equals 9,000 Somliland shillings - the currency is so devalued, shoppers wander markets with wads of the paper money thrown in their bags (Credit: AFP/Simon Maina)

The self-declared country, which broke away from Somalia in 1991 but remains unrecognised by the international community, has become something of a wild frontier for cashless payments as it charts a trajectory towards creating the world’s first cashless society.

Whether in a shack on the side of a road or a supermarket in the capital of Hargeisa, mobile payments are fast becoming the standard in the country.

There are not many things tiny Somaliland can claim to be a world leader in, but cashless payments might be one

“Most people are paying by mobile now,” Omar says, as he processes a payment on his mobile in one hand. “It’s so much easier.”

While developed and developing countries alike have been moving toward cashless payments with phones or contactless cards, Somaliland’s motivation is unique.

This shift away from cash is in part due to the rapid devaluing of the Somaliland shilling, the breakaway self-declared republic’s own currency which now trades at around 1 USD to 9,000 shillings. A few years ago it was just half that.

Somaliland broke away from Somalia in 1991 at the start of the country’s deadly civil war – a conflict that has continued in different forms to this day.

The shilling also experienced a turbulent beginning. Introduced in 1994 it was widely used to finance weapons and the region’s war against armed groups, before later being printed on demand by officials to further political aims in the breakaway republic, resulting in an almost constant devaluing of the currency year by year.

With denominations of 500 and 1,000 being the most common, just paying for a few groceries can require a wad of notes, while a medium-sized transaction requires a bag stuffed with the currency.

As for moneychangers who make their living exchanging US dollars and euro to shillings on the street, wheelbarrows are often used to move the piles of notes from one street to the next.

The breakaway self-declared republic’s own currency which now trades at around 1 USD to 9,000 shillings. A few years ago it was just half that.

With no internationally recognised banks, no formal banking system and ATMs somewhat an alien concept, two private companies – Zaad which was launched in 2009, and the newer e-Dahab – have filled the void creating a mobile banking economy where money is deposited through the companies and stored on phones, allowing items to be bought and sold with personalised numbers.

“To buy one of these in shillings you’d need one or two million!” Ibrahim Abdulrahman, an 18-year-old shop assistant in a jewellery shop says, as he points to a row of small gold necklaces, laughing slightly at the notion of someone attempting to buy in local currency.

“One person can’t carry that amount of money – it’s too much. You would need a bag to carry it,” he continues gesturing with both hands. “We never take Somaliland shillings now, just dollars and mobile.”

From brick and mortar shops in Hargeisa to street sellers sitting on old worn crates down dusty dirt roads in the country’s rural east, cash is being increasingly sidelined as more and more people adopt the cashless approach.

In a country with high illiteracy rates, simplicity and functionality has helped the technology flourish. Paying requires little more than typing in a few numbers followed by a code unique to the vendor. Such codes are everywhere, crudely stenciled on the façade of tin shacks or market stalls, and in more expensive establishments, printed out, laminated, and neatly placed prominently on an interior wall. It requires no internet access so even the most basic of mobile phones can be used, with users moving money from their mobile banking account to another by dialing numbers and codes in a similar way to topping up a mobile phone.

In a country with high illiteracy rates, simplicity and functionality has helped the technology flourish

“This is just from today,” Eman Anis, a sprightly 50-year-old street seller in Hargeisa’s bustling gold market says, showing sales of over $2,000 (£1,513) on her mobile. Payments through mobile she says have rocketed from 5% two years ago to more than 40% now.

“It’s just easier to use mobile, the exchange rates are a problem, but now we can do everything through Zaad,” Anis says referencing the most popular mobile payments company. “Now even the beggars have Zaad."

While her words are flippant in nature, there is some truth to what she says. The payment system hasn’t just made life easier for consumers and merchants; it’s also made life possible for some of the poorest. 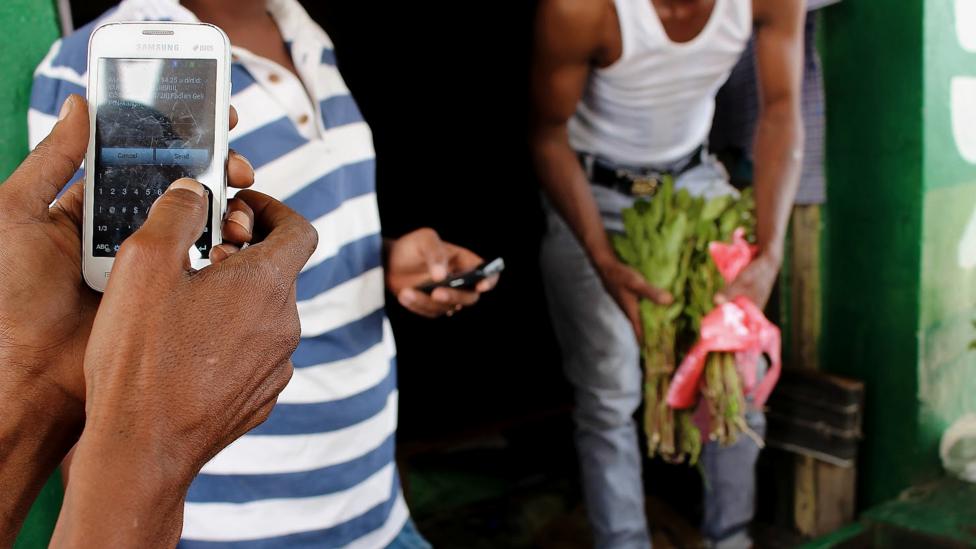 With Somaliland hit by a deadly drought over the past year that has devastated the agro-pastoral livelihoods of hundreds of thousands of people, mobile payment technology has allowed Somalilanders in urban areas to quickly send money to their impoverished and starving rural relatives.

“Because of the drought we had nothing to sell and no money, but family members sent money to help,” Mahmoud Abdulsalam, a camel herder who became displaced due to the drought says from Haaro in western Somaliland. “Even in the countryside we use mobile money.”

With vendors now reporting that the use of mobile payments has increased from around 10 to 20% a year ago to nearer 50% now, the technology is fast becoming the preferred way to make transactions in tiny Somaliland, a country with a minuscule economy and where camel is the largest export. In Somaliland, some employers have even began paying through mobile.

“Even in the countryside we use mobile money" - Mahmoud Abdulsalam

Research carried out throughout 2016 found that 88% of Somalis over the age of 16 owned at least 1 SIM card, with 81% of Somalilanders living in urban areas, and 62% of those living in rural areas using mobile money services. With the prevalence of cheap mobile phones on the continent, other African countries like Ghana, Tanzania, and Uganda have seen a similar mobile money revolution, with Kenya’s version of Zaad, M-Pesa, believed to be used by around half the population.

However, not everyone is happy with this rapid movement away from cash. 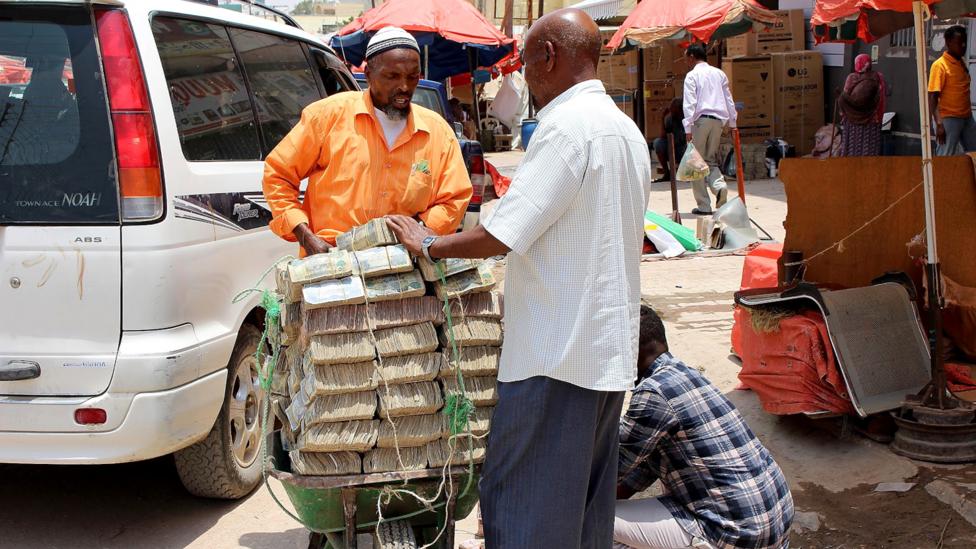 In Somaliland, stacks and stacks of the local devalued physical currency are rapidly falling out of fashion - people are turning to digital payments (Credit: Matthew Vickery)

There are murmurs of corruption and concern from some over the lack of regulation as the two private companies that have cornered the mobile banking sector continue to have unchecked influence on the already fragile economy. An economy that is exposed to corruption in government and relies heavily on the export of livestock in a region where drought is common and mass animal deaths can be just a matter of months away.

While mobile payment services in other countries use local currencies, in Somaliland both companies deal strictly with US dollars, aiding an increasing reliance on the dollar in the autonomous region in east Africa.

Surrounded by wads of Somaliland shillings piled and bundled together into walls of money on the roadside, moneychangers in the breakaway republic like Mustafa Hassan say not only is their business suffering but that the mobile payment system is corrupt, causing inflation, and creating a mini illegal economy of its own.

“We expected the government to either regulate this or stop it [mobile payments], because there are many problems with mobile money here. It’s controlled by two companies and it is like they are just printing money,” Hassan says, as other men in the exchange trade gather round him and nod in agreement.

“It’s causing inflation. Everyone who should have money in their pocket is now using mobile, even to do small things like take the bus and none of this is in local currency, it’s in dollars.”

Yet despite this, Hassan reluctantly still uses the mobile payments system, with customers able to send him dollars direct to his phone which he then exchanges for shillings on the street.

“You know it makes things easy, someone can send me money quickly and easily,” he admits. “A cashless society here is possible – and it’s already on its way. What that means for moneychangers like me, I don’t know.”

While Somalilanders continue to embrace the technology and the jolt it’s given to the economy, moneychangers like Hassan can be hopeful at least that there still remains a few stalwarts that are unconvinced.

“It’s a bank in your pocket, it could get stolen. I always use cash, for everything,” Abdullah, an elderly man says, standing out as an anomaly at the khat stand as he pays with cash rather than by mobile.

“I don’t know if I will ever change to mobile,” he shouts back as he rushes away, shooting off into a nearby busy road as vehicle horns beep frantically at people to move out of the way.

“That’s like asking when I’m going to die, who knows!”