By Chris Baraniuk 19th September 2017
Transporting cargo across the oceans is vital in a global economy - yet ships sully our already polluted planet. Some of the design solutions to fix that sound straight from science fiction.

Last month in San Diego, California, an engineer sat down at his computer and gripped a joystick on the desk in front of him. He wasn’t playing a video game – he was piloting a massive cargo ship thousands of miles away off the coast of Scotland.

The engineer’s joystick was directly linked to that vessel, via satellite, allowing him to control its movements precisely – entirely by manual remote control. He watched carefully as a virtual ship’s changing position was plotted on his screen. Meanwhile, on board the ship itself, other workers overseeing the test eyed their equipment and felt the craft bob and pitch under their feet. Over the course of a four-hour experiment – carried out by Finnish energy and technology firm Wärtsilä – it was manipulated by their colleague half-way round the world.

Wärtsilä believes that smarter ships of the future will allow ship owners to more efficiently control the movements of their vessels, reduce fuel consumption and lower emissions. It’s an ambitious idea to tackle a grand challenge of the 21st Century, in which we are simultaneously more inextricably interlinked in global trade, but also face climate change that could change weather patterns, sea levels and seriously affect the journey of goods moving from A to B.

What’s more? Those ships could be captain-free, and could one day be controlled from many miles away not by humans, but by computers. 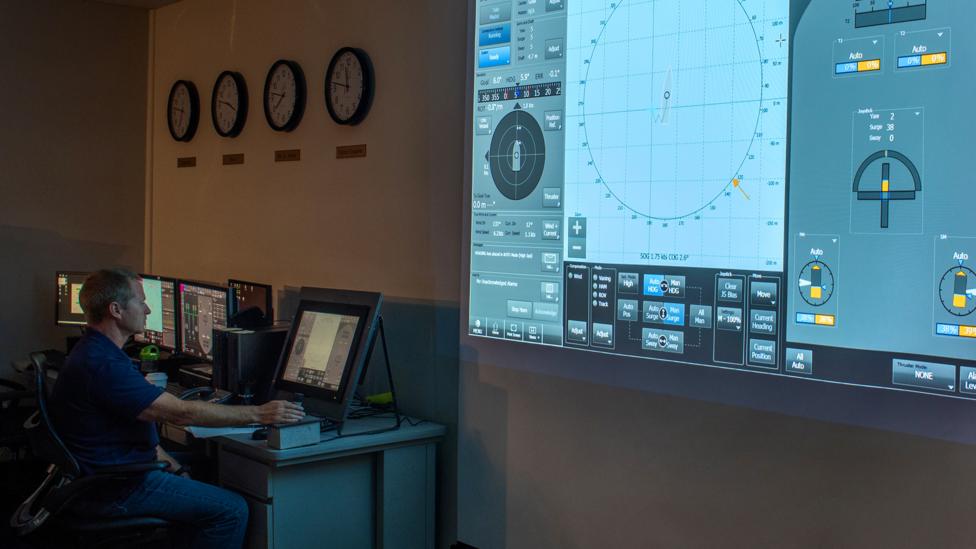 The cargo ships of the future could travel across the oceans devoid of humans - and instead be remote controlled like a video game 5,000 miles away (Credit: Wärtsilä)

Shipping is a gigantic industry, but it is not known for being the most hi-tech. Many vessels criss-crossing the world’s oceans today are bulky, diesel-guzzling giants that haven’t fundamentally changed in many years.

Will ship designs change much in the near future? And is automation, which we are already seeing more of in road vehicles, about to hit the waves as well? 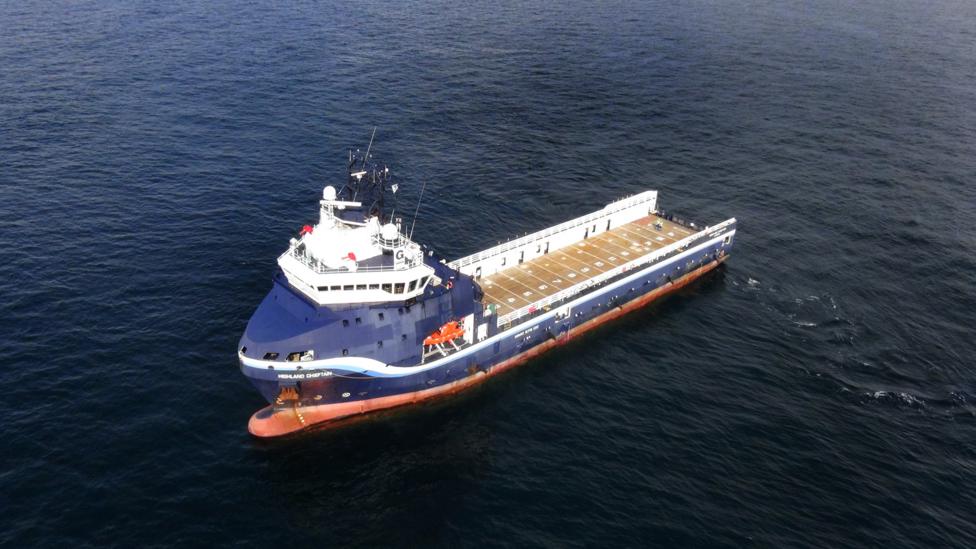 Here's what a cargo ship remote-controlled by a human half a world away could look like. A certain degree of automation could cut costs spent on crew. (Credit: Wärtsilä)

A big driver for updating the world’s ships is the war on pollution. In fact, just 15 of the largest vessels produce the same amount of sulphur emissions as all the planet’s cars put together. But large companies are also, of course, looking for ways of maximising their profits.

Wärtsilä’s experiment is still some way from becoming an everyday reality in shipping, admits head of digital Andrea Morgante. But because ship owners could cut significant costs by removing human crews from their vessels, he’s convinced it has potential.

“You could imagine new forms of tugs that are remote-controlled, to support vessels in the harbour,” he says. Another option would be ships that transport cargo around ports or along coastlines.

In fact, one firm already working with others to test and deploy fully autonomous vessels that do this sort of thing without human pilots is Kongsberg, of Norway.

It has two ships in development, the Hrönn and the YARA Birkeland. The Birkeland, an 80-metre long (264ft) container transporter will also be fully electric and is planned to enter service in the second half of 2018.

Peter Due, director of autonomy at Kongsberg, extols the accuracy of the sensors on board its test vehicles.

“One system can see a beer can – you can’t tell if it’s Heineken or Carlsberg but you can see a beer can coming up close [on the water],” he explains. Machine learning trains the system to know what sort of objects are important to avoid, he adds.

“A seagull is not something to be [wary] of but if you have a swimmer it will recognise that and act accordingly.”

A recent report by the University of Southampton suggested autonomous ships will arrive faster than expected, because of falling technological costs and a demand to solve a labour shortage in some areas of shipping.

But as Due points out, bodies like the International Maritime Organisation (IMO) will probably take several years to design regulations that allow autonomous vessels to operate in international waters. Within a country’s national waters, however, local laws may allow for quicker adoption of such systems, he adds.

Regardless of who or what is piloting future ships – might it be human or robot? - the design of massive, emission-spewing commercial vessels is set to change. And that’s another way that these vital modes of transport could lessen their impact on our planet. 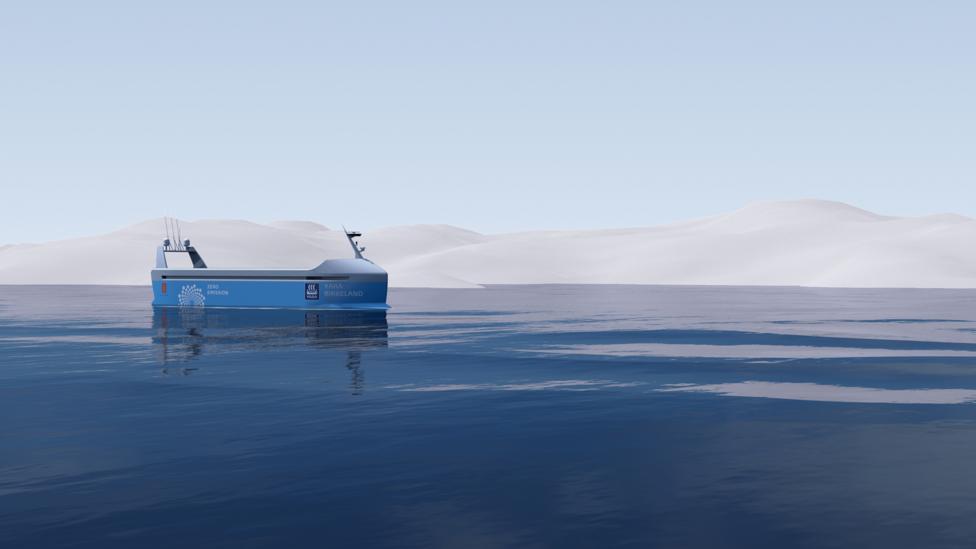 The Yara Birkeland, set to be completed next year, is claimed to be the first autonomous shipping vessel in the world (Credit: Yara International)

It is possible, for example, to build ships out of composite materials, for example glass fibres and plastic, which could greatly reduce the weight of some vessels and thereby improve fuel consumption and increase cargo capacity.

For some vessels, including passenger ships, this could be of benefit says Volker Bertram, a professor of ship design and a project manager at DNV GL, a classification society.

But he adds that for larger craft, especially those moving heavy cargo, steel will probably remain the material of choice.

“If you have an oil tanker and 90% of the weight of the oil tanker is cargo, there is not much motivation to build it in a lightweight fashion,” he explains. 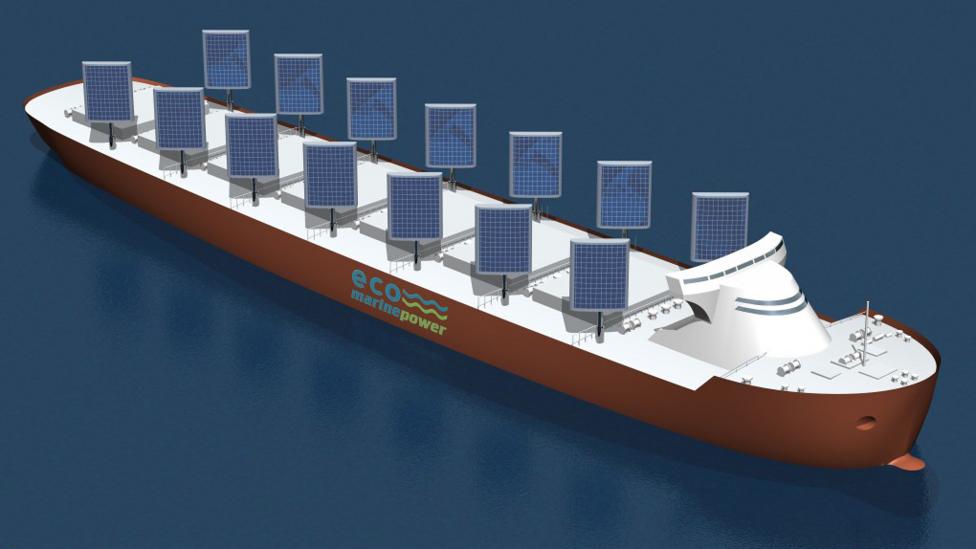 In the 21st Century, oceans are overrun with fossil fuel-spewing cargo ships, exacerbating climate change. But the ships of the future could run on sun (Credit: Eco Marine Power)

Eco Marine Power, based in Japan, is working on rigid sails featuring solar panels that can be fitted to cargo ships.

“When we first started, it wasn’t that feasible to put solar [panels] on the rigid sails but the technology is always improving and the cost is coming down,” explains Greg Atkinson, director and chief technology officer.

He says any ships that use Aquarius will still need an engine and traditional fuel source, but wind and solar could additionally be used to reduce fossil fuel consumption.

Of the renewable energy portion, he believes that about 80% will come from the action of the wind on the sails and a further 20% from the solar panels.

Eco Marine hopes to trial its system at sea on a bulk carrier – a type of large commercial ship that moves bodies of cargo like iron ore, coal or grain.

“They’re good target ships [for this technology],” explains Atkinson. “They’re going relatively slow and they’re sailing in some of the more favourable areas for wind.”

There are other such systems elsewhere in the world, as well, which plan to develop a cargo ship with rigid sails, this time a car carrier that could hold up to 2,000 vehicles.

But there are additional costs involved with designs like this – and indeed risks. Rigid sails, of course, can be dangerous in high winds, especially if they cannot easily be folded onto or beneath the deck.

“It’s a bit sobering to see that so many concepts have been pushed, and via lots of publications, and we see relatively few installations,” notes Bertram. He points out that digital technology is aiding ship designers and helping them to more accurately simulate how their vessels will perform in different conditions at sea. Energy efficiency savings of a few percent may result from this work, he believes.

And techniques like 3D printing are probably going to change how some ship components are produced. A prototype 3D printed propeller was recently produced by a consortium of shipping companies in Rotterdam, Netherlands.

Of course, if a part breaks at sea and requires replacing, 3D printing it on board might be an attractive prospect for owners of some of the world’s largest ships.

These ships of the future – monster vessels piloted half a world away like a toy, built from futuristic materials that cut emissions and potentially powered by the Sun – are behemoths of the sea that might just change the face of Earth’s oceans forever.