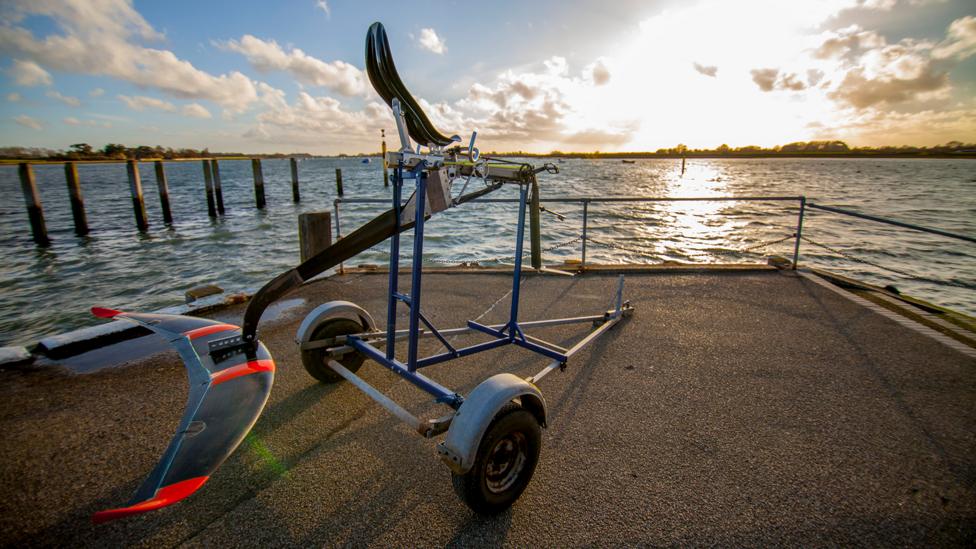 By Mark Piesing 22nd September 2017
While teams try to build a car that can go as fast as the speed of sound, other researchers are trying to break a more modest record – can a boat powered by human effort go faster than 20mph?
O

On a cold day in October 1991, a team from the Massachusetts Institute of Technology (MIT) led by physicist Mark Drela set a record for the fastest human-powered water craft. Their hydrofoil, Decavitator, reached a speed of 18.5 knots (21.3 mph/34km/h) over a 100-metre (330ft) course on the Charles River that flows through Boston.

Decavitator didn’t look anything like the hydrofoils that take you to your favourite Greek island. Rather, it was a catamaran with two thin hulls and a giant aeroplane propeller strapped to the back. A cyclist – Drela himself – was suspended between the two hulls, pedalling furiously.

In the spring of 1993, the Decavitator team was awarded the DuPont prize for the fastest human-powered water craft. After its record-breaking journey, the craft was put on display in the entry lobby of Boston’s Museum of Science.

Twenty-five years later, despite many attempts, the record remains unbroken.

However, an Oxford University spinout called Animal Dynamics, co-founded by zoologist Adrian Thomas, is spending £200,000 ($260,000) to do just that. Their craft, the Malolo, is a hydrofoil-like Decavitator. Unlike its rival, the Malolo’s design is inspired by the way whales swim through water – instead of a propeller, it has the kind of large, arched tail that you sometimes spot above the water when a whale dives.

Now two years after starting work on the project, the team have begun testing their third prototype off the south coast of England. According to Thomas, they have already reached speeds of about 12 knots (13.8mph/22km/h). 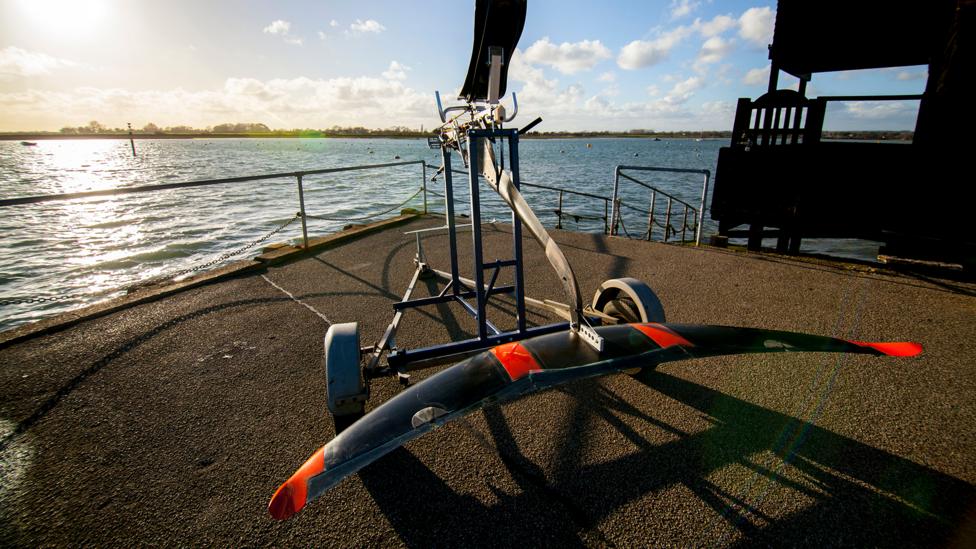 The design uses a principle very much like that of a whale tail (Credit: David Hills)

They expect to have to build at least three more prototypes before they really go for the record next year, each one smaller and lighter than the one before.

The question is, can they succeed when other attempts since the Decavitator have failed?

Human-powered vehicles are fueled only by the muscular strength of a human being. For most of us, this means only one thing: bicycles. However, they can also be found flying in the air, diving under the sea and even riding on rails.

Bicycles are an everyday form of transport for many people, but the principle of human-powered vehicles can also be developed as novelty runabout for tourists or to achieve something much more significant like testing new technology – to break a record, win a prize or cement a reputation.

Drela had already been involved in setting records for human-powered planes before his water-speed record attempt – a depth of experience that few teams have been able to rival. His work in human-powered flight culminated in the flight of the dragonfly-like Daedalus from Crete to Santorini in 1988. This trip set the human-powered flight record for speed and endurance.

The only way the prize would be theirs, Drela realised, would be by designing a human-powered hydrofoil

On its return to the USA, Drela’s team was attracted by the challenge of winning the DuPont Prize for the fastest human-powered water craft, which had been set up in 1988. The prize would be awarded to the first team to break 20 knots (23mph/37km/h) over a 100-metre course, or to the team with the fastest speed on record as of 31 December 1992.

The only way the prize would be theirs, Drela realised, would be by designing a human-powered hydrofoil.

Hydrofoils are part-boat, part-plane. They are often used to connect remote islands or to enable fast commutes. As the boat gains speed, the ski-like foils under the hull lift it up out of the water like aerofoils help raise a plane up into the air.

The first hydrofoil was invented at the end of the 19th Century. We then had to wait until 1955 for German engineer Julius Schuck to present the first human-powered hydrofoil to the public. He called it the Wasserlaufer (water runner).

Since then, many different kinds of one- and even two-seat hydrofoils have been built, with names like AquaSkipper, Foiled Again and Mutiny on the Boundary Layer. They have used propellers under the water, propellers out of the water, flapping wings and even oars to make them go fast enough to take off. The first version of the Flying Fish was even launched from a catapult. Spectacular races have been held in Japan. 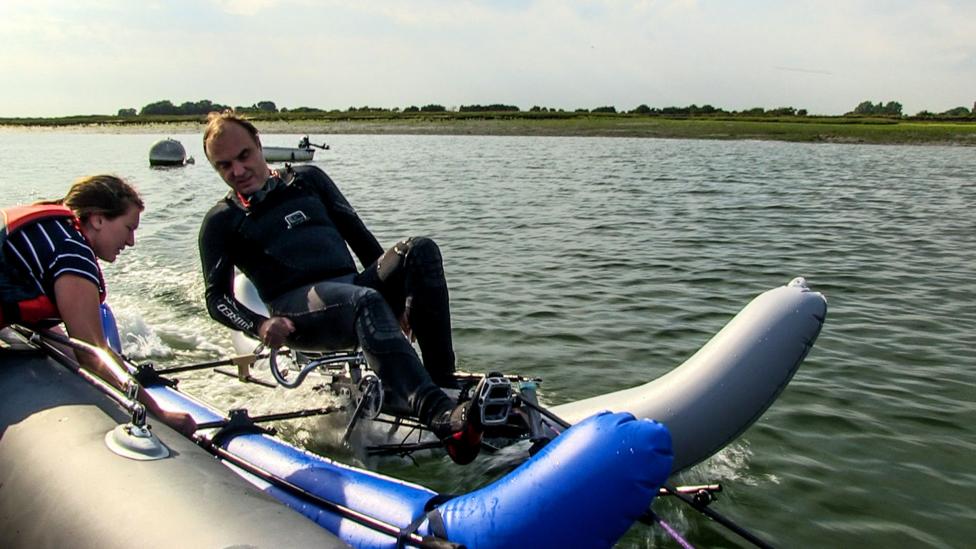 The speed record may not seem that fast, but moving at speed on water requires enormous effort (Credit: David Hills)

The attraction for engineers such as Drela is that human-powered hydrofoils are the fastest human-powered craft on the water. The long, sleek rowing eights made famous by the Oxford and Cambridge Boat Race would still be unable to beat the record set by the Decavitator all those years ago.

“I thought my record would be broken eventually,” says Drela. “But we came to the project with a huge amount of experience of other human-powered projects, and it was still a hard, hard problem.

“It was much harder problem than building our plane. If you drift up and down in a plane, it’s not a problem, even by a foot. On a hydrofoil, drifting even by a few inches can be a disaster.”

“There have been an awful lot of teams that have tried and failed to break the record because there are only a limited number of people who have the skills to do it, they haven’t got enough time to do it properly, and it’s expensive,” says Adrian Thomas, co-founder of Animal Dynamics. “You need to be able to spend money, do it yourself and make mistakes.”

The reason why we have a chance of breaking the record now is that the whale tail as a propulsion mechanism has a 20–30% efficiency gain over a propeller – Adrian Thomas, Animal Dynamics

“It is now at the stage that it is too expensive for hobbyists and needs a whole bunch of different skills to do it,” he adds. “That’s probably why Mike Drela was the one able to do it. He had a fantastic set of skills and was backed by MIT.”

However, some in the small community think that the Decavitator’s victory was down to a tail wind. 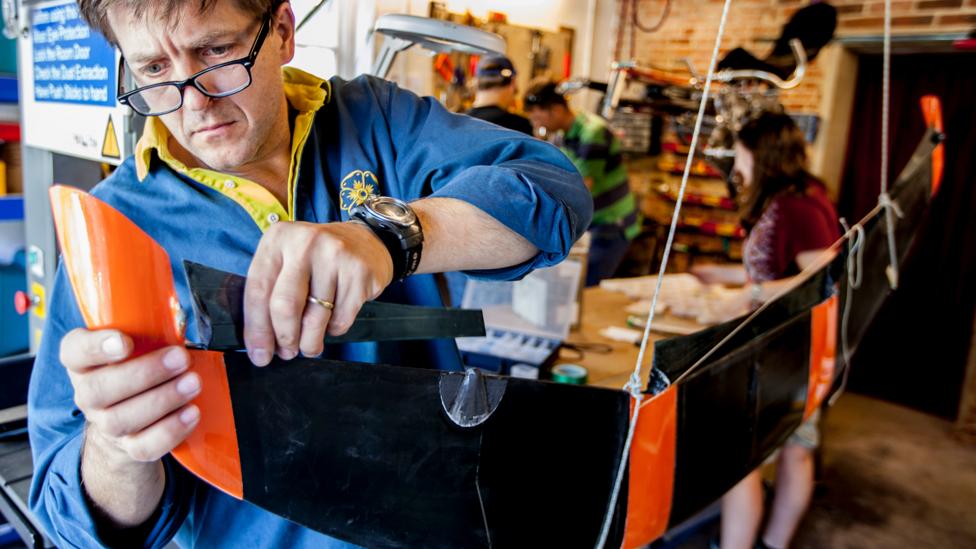 Malolo is expected to try and break the record in 2018 (Credit: David Hills)

Then in a head-to-head competition in December 1992 at Puddingstone Reservoir in California where the wind speed was negligible, Decavitator’s speed was slightly slower than the Flying Fish’s.

“Top sprint speed records require hydrofoil designs that are designed for high speed,” he says, “and these are inevitably quite impractical in that they won't fly at all with less-than-sprint effort.

“What advice would I have to someone wanting to break it today? Find a sponsor for the project.  It is unlikely that anything marketable will be derived from a top speed competition.”

However, Thomas and Alex Caccia, co-founder and CEO of Animal Dynamics, are confident they are going to smash the record with a speed faster than 20 knots – and that they will have something they can bring to market afterwards.

Animal Dynamics is a hi-tech spinout with a difference. Its technology is inspired by nature. It is developing a pocket-sized drone called the Skeeter for the UK Ministry of Defence, that was inspired by the dragonfly and uses flapping wings to fly. The spinout has just been awarded a contract to develop a prototype of an autonomous paramotor that could help resupply soldiers on the frontline in the future.

The lessons from this project have, according to Thomas and Caccia, helped to solve the engineering challenges of the Malolo.

“The reason why we have a chance of breaking the record now is that the whale tail as a propulsion mechanism has a 20–30% efficiency gain over a propeller,” says Adrian Thomas. “It’s just hard to do.”

“Various people have looked at it and played with it, but no one has ever actually developed it. I think this is because trying to develop a mechanism to drive it efficiently is difficult.” 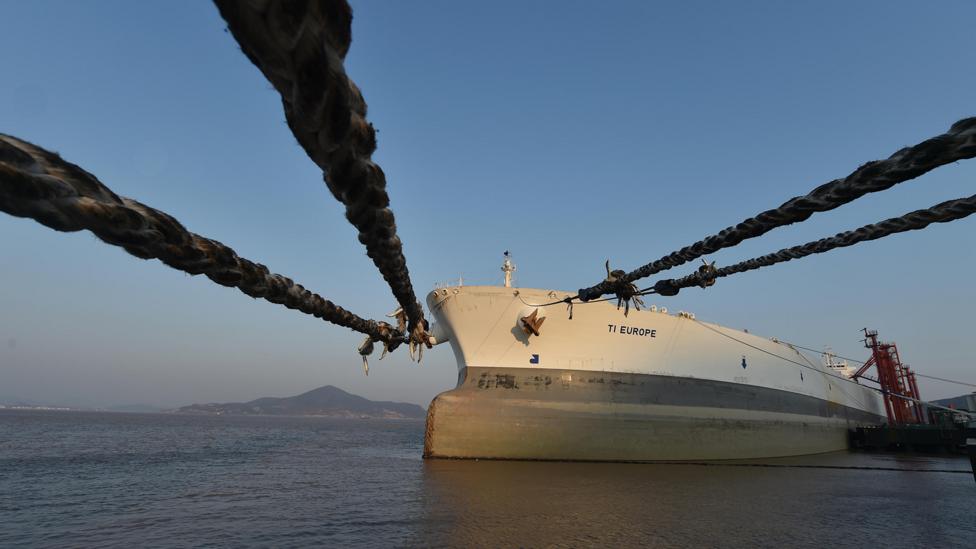 Large ships are responsible for a sizeable share of the world's greenhouse gas emissions (Credit: Alamy)

“There are ways of doing it, and we have various patents in now,” adds Thomas. “But this is the big problem.”

“For many teams, it is easier just to use a propeller and get a guy cycling,” says Caccia.

Thomas and Caccia have their eyes on a prize bigger than setting the record: a technology that will help make the air cleaner and the planet cooler by cleaning up one of the dirtiest industries around – the shipping industry.

“What we are really interested in is using the whale tail as a form of ship propulsion,” says Thomas. “We don’t have to build ships that look like whales; we just need to replace propellers with foils that go up and down.

“The hydrodynamics are the same as on the Malolo and the mechanics are too. The nice thing is that there are already hydraulic mechanisms that work like a whale’s tail that we could use.”

In a water tank near their laboratory in north Oxford they will soon begin testing of an outboard motor propelled by a foil that goes up and down rather than a propeller.

“Whale tail propulsion could offer a 20–30% fuel saving for the shipping industry. The industry is moving to autonomous ships and now is the time to come up with a more efficient propulsion mechanism.

“In the end, we want to break the record because it would be public confirmation of a novel technology,” says Alex Caccia.

Now that would be a prize worth winning.