Loading
In Depth | Military
The female code-breakers who were left out of history books
Share using EmailShare on TwitterShare on FacebookShare on Linkedin
(Image credit: SPL)
By Chris Baraniuk10th October 2017
Over the last 100 years, women have had significant, high-level roles in breaking secret codes – from Nazi ciphers to the secret messages of Al Capone’s gang – but their contribution is only just emerging.
P

Picture this. In 1917, the United States is just entering World War One. But to begin with, its military is small and its capacity for intelligence gathering is severely limited. There is no NSA or CIA. In fact, military code-breaking is being done on a small but intense scale – at a mansion estate in the Illinois countryside owned by an eccentric millionaire.

And the two people at the centre of this extraordinary operation are the code-breaking team Elizebeth Smith and William Friedman, who would later marry. Neither had formal training in cryptanalysis. Elizebeth had studied Shakespeare and Tennyson at college and Friedman had a PhD in genetics. But – as is important both in literary and genetic analysis – the two were adept at recognising patterns.

They now found themselves cracking enemy codes sent from Washington at the only place in the country where this sort of work was, at that time, being done for the military.

Over the last 100 years, women have been involved in code-breaking work like this in far deeper ways than has ever been acknowledged before. But their contributions are now beginning to be recognised thanks to the discovery of previously forgotten papers and interviews with the few surviving members of once-secret code-breaking enclaves.

On 10 October 2017, it is Ada Lovelace Day. Lovelace was a 19th Century mathematician who wrote algorithms for early computers designed by Charles Babbage. She also realised the potential future significance of computers in a way that Babbage did not. It seems a fitting time to also remember the women who applied code-cracking techniques by hand, long before cryptography became the preserve of computer scientists.

The millionaire who owned the estate where Elizebeth and William toiled was George Fabyan. He had originally employed Elizebeth as part of a project to prove that William Shakespeare’s plays had in fact been written by his contemporary: scientist and statesman Francis Bacon. Fabyan believed the first published book of Shakespeare’s plays contained hidden cryptographic messages that proved this.

But his country campus, Riverbank, was the site of more than one meandering endeavour. He hired talented scientists and put them to work in his laboratories, tasking them with things like inventing new munitions for the military or developing drought-resistant strains of wheat.

“In polite terms, he was insane, he was a lunatic,” explains Jason Fagone, author of a new book about Elizebeth Friedman called The Woman Who Smashed Codes.

In polite terms, he was insane, he was a lunatic

“He wore riding pants all the time even though no one ever saw him on a horse. He called himself a colonel even though he had never served in the military.”

But nonetheless, Fabyan’s whim facilitated the centre of US code-breaking at this time of international crisis. It was here that the light of Elizebeth’s talent began to shine. She would go on to become one of the greatest code-breakers in history, as would her husband William – who coined the word “cryptanalysis”. But although William’s achievements have been well-documented, Elizebeth’s were largely marginalised for decades.

For whatever reason, she discovered that she had a knack for turning around the jumbled letters of a cryptogram in her head, working out associations with pencil and paper. She consulted, for example, statistical measures of the frequency of letters and words in various languages – which might help a cryptanalyst discover which letters are being used in place of the secret ones.

In the cryptogram “UIF GPY KVNQFE PWFS UIF GFODF”, for instance, it’s a good guess that “F” stands in for “E” since it appears many times and “E” is the most common letter in English. “UIF”, a three-letter word ending in “E” might be “THE” – and it is. Really, it’s quite a simple cipher – the letters of the alphabet shifted one space to the right. “THE FOX JUMPED OVER THE FENCE”.

Elizebeth was able to crack codes significantly more devilish than this. Ones in which the letters had been shifted in a variety of complex ways, sometimes defined by tables in books that the code-breakers had to reverse engineer using only the encrypted output and brainpower.

Even after World War One, her abilities were in high demand, explains Fagone. Having left Riverbank with her new husband, she continued to unravel encrypted messages. But this time they were ones penned by criminals. Among the crooks she helped put behind bars were members of Al Capone’s gang.

“Elizebeth was repeatedly called in to fix messes that nobody else could fix – she was a secret weapon for hire,” says Fagone. “Her skills were so unusual that she became indispensable.” 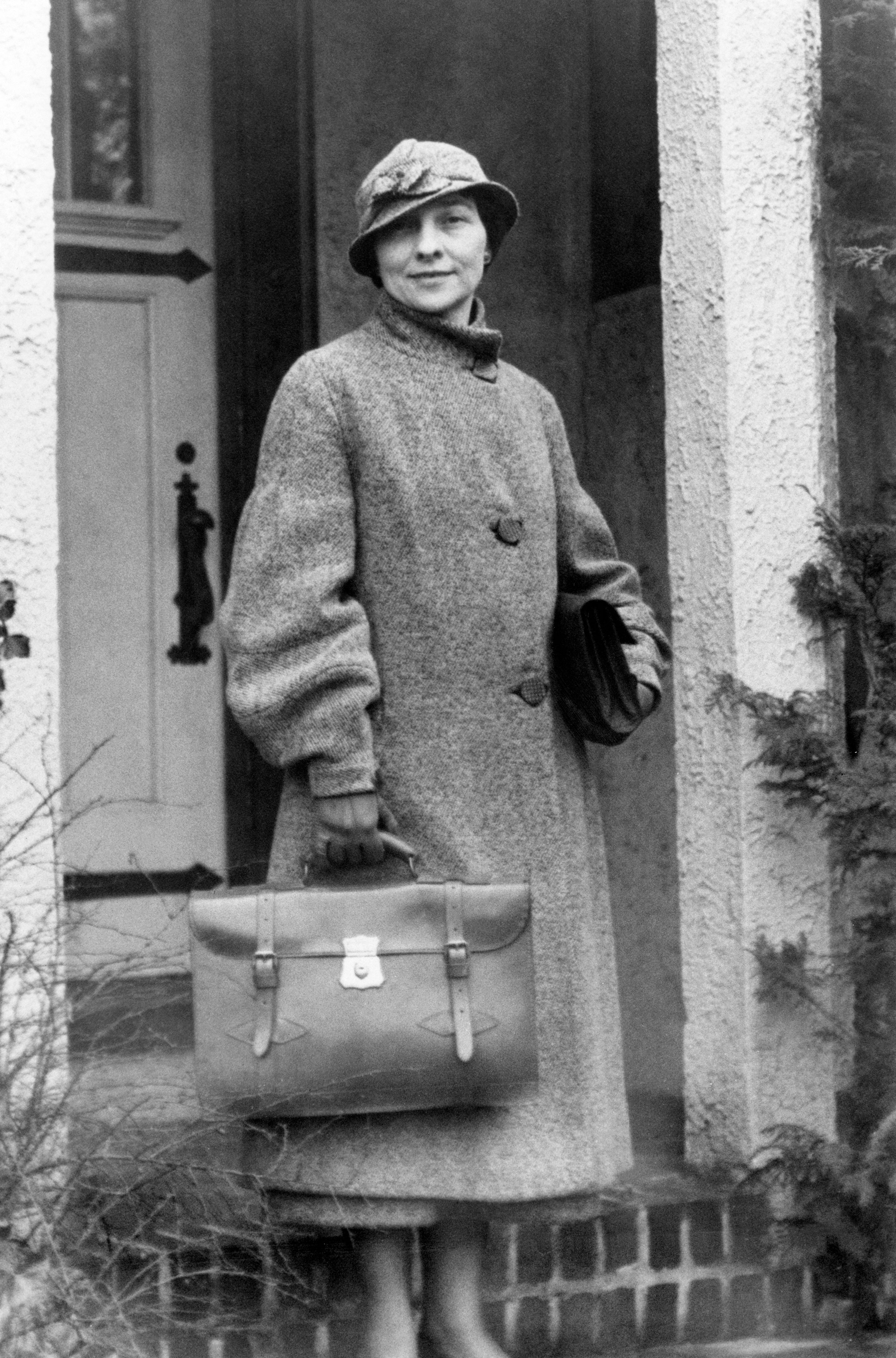 Elizebeth Friedman, above, helped the US decode many enemy messages (Credit: SPL)

And thanks to papers recently declassified, it is now known that during World War Two Elizebeth helped to smash a network of Nazi spies trying to foment fascist revolutions in South America – their ultimate goal being an attack on the US. Many of these spies were arrested as a direct consequence of her and her team’s work at the US Coastguard. However, for decades J Edgar Hoover and the FBI claimed more or less all the credit for this achievement. Elizebeth, sworn to secrecy and uninterested in publicity, stayed quiet.

When she first entered the world of code-breaking, Elizebeth really was one of very few women in the world doing such a job. But by World War Two things had moved on. Liza Mundy, author of another new book, Code Girls: The Untold Story of the American Women Code Breakers of World War II, explains that the US Navy and Army both hired thousands of women to help in code-breaking operations.

“Young women majoring in math, science or languages got secret letters inviting them to interview at Wellesley College – it was an astronomy professor who sent the letters,” says Mundy.

“She asked them if they liked to do crossword puzzles and if they were engaged to be married.”

The correct answers were “yes” and “no” respectively, adds Mundy. Women schoolteachers were also recruited and their achievements included cracking Japanese shipping codes. Mundy has found a poem written by one, in homage to a popular song of the day, “Pistol Packin’ Mama”.

Occasionally, when operations like this are discussed, the women are described as having been like cogs in a giant machine, simply sorting bits of paper or doing minute tasks that later resulted in the descrambling of encrypted messages. But as Mundy and Fagone have both shown, there were clearly also examples of women who had significant, high-level roles in US code-breaking.

One case, says Mundy, is a woman that William Friedman worked with during his efforts to crack the Japanese ‘Purple’ cipher. Genevieve Grotjan was working within his team in September 1940 when she uncovered a crucial pattern that would ultimately lead to the breaking of Purple altogether. Her supervisor at the time, Frank Rowlett, responded by shouting, “That’s it! That’s it! Gene has found what we’ve been looking for!”

Another good example is Ann Caracristi, who later went on to be the first female deputy director of the NSA. Working with her colleague Wilma Berryman during the war, the pair unravelled address codes used by the Japanese army.

“They were able to supply the Pentagon every day with order of battle – that became a huge operation,” explains Mundy.

“At [US facilities] there were definitely women at every step of the way.”

What of Britain? Bletchley Park is now well-known and code-breaking there, which famously involved breakthroughs by early computer scientist Alan Turing, was also carried out in part by women. A handful of these women have been recognised since the wall of silence about what happened at Bletchley lifted. Joan Clarke, Mavis Batey and Margaret Rock have been the subject of articles and books. Female codebreakers at Bletchley Park were also depicted in a British TV drama series in 2012.

But a few other, less well-known names are now emerging from the shadows. Bryony Norburn is a PhD candidate at the University of Buckingham who has spent more than five years researching such figures.

One person of note who hardly anyone today has heard of, she says, is Winifred “Wendy” White.

Miss White, as she is referred to in some surviving documents, actually began her work around the same time as Elizebeth Friedman, in 1916. Norburn explains that she was employed in the War Office, though little is known about the specifics of her role. But there is also a record of her working at Bletchley Park and, among other things, helping to crack an Italian naval cipher called ‘Rosie’.

Norburn has unearthed a document in the National Archives at Kew, written by William Francis “Nobby” Clarke, an intelligence officer who was stationed at Bletchley Park. In the document, Clarke records correspondence between himself and other supervisors at the code-breaking centre, some of whom appear to have had a vendetta against Miss White. One described her as “a very difficult woman”. But Clarke was perturbed by this, referring to the business as a “conspiracy” against her.

In one draft letter he wrote, “Miss White does not want a higher position because of her rank but her 14 years work on Italian, French and American codes have given her a greater knowledge of various forms of cyphering than most of the Italian section.”

Clearly she was experienced, although full details of her work at Bletchley are difficult to tease out.

Norburn is now trying to uncover more about Miss White and others like her, who are far less well-documented than some of their contemporaries.

According to some of the researchers and writers who have revealed these stories, along with setting the record straight, there is an opportunity to encourage the technically gifted women of today.

Fagone points to the controversial discussions of whether women can equal men in certain fields, such as mathematics or computer programming.

“There are all these debates – is there a biological difference?” he says.

“We don’t need to have that debate because we have the history – when you go to the history, women have been there, they’ve been doing this work all along.”

“I think it’s inspirational. It shows that anything’s possible – I mean, back in [WWII] women’s roles were very different.”

If any readers have knowledge of or are related to former female British cryptanalysts (code-breakers), or any other women who held a similar position, Bryony Norburn would be very interested to hear from them. She can be contacted at bryony.norburn@buckingham.ac.uk or via the University of Buckingham.