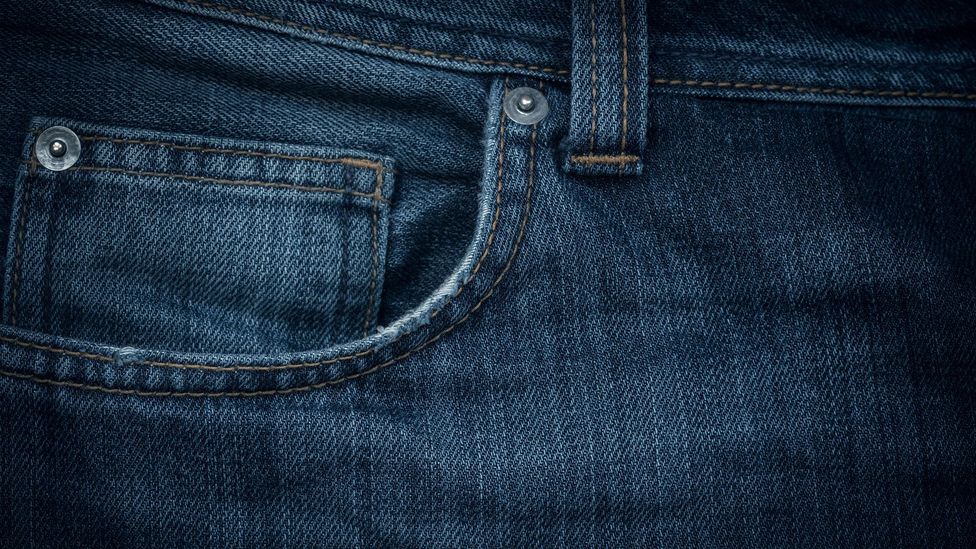 By Zaria Gorvett 24th October 2017
Meet the hidden pressures shaping design, from the waistlines of kings to the whims of 18th Century wagon drivers.
I

It was 1872 in Reno, Nevada and Jacob Davis was worried. The Latvian-Jewish tailor had previously made mostly functional items, such as wagon covers and horse blankets for the workers on the Central Pacific Railroad. But this had all changed two years earlier after a visit from a woman requesting a new product: strong waist overalls, or work pants in modern English. They were for her husband, who worked as a woodcutter.

Davis purchased bolts of a heavy woven fabric, cotton duck, from a wholesaler. Then he began stitching. The pants were comfortable and loose-fitting, with a number of thoughtful details. He added plenty of pockets, including a little one at the front for stashing your watch. The weaker points were reinforced with copper rivets, the kind he usually used to fasten straps to horse blankets.

They were a raging success and soon Davis started making them in blue denim, too. His “reinforced jeans” were extraordinarily durable, gradually fading but never breaking. He literally could not make enough of them. He needed a patent, fast.

He couldn’t afford one on his own, and instead sought help from his wholesaler. Together they received a patent in 1873. The wholesaler's name? Levi Strauss & Co. Today they make around 20 million pairs every year.

But despite this stratospheric success, the garment has barely changed. Jeans of all brands still have antiquated watch pockets, now too small to be useful, while fake copper rivets – a technology made obsolete by modern stitching methods – adorn the seams. Most bizarrely of all, the battered, worn-down look of jeans worn by generations of miners, cowboys, farmers and woodcutters is painstakingly faked before they’ve left the factory. 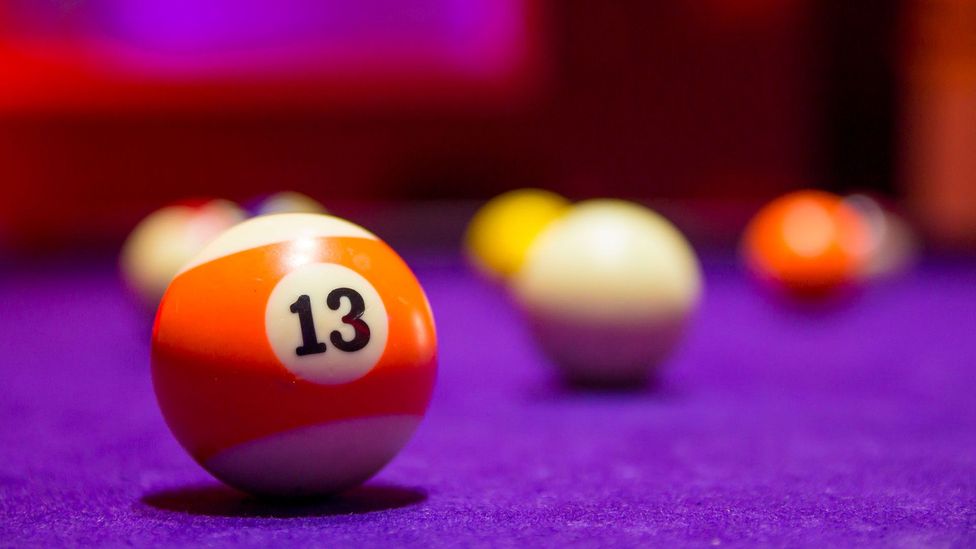 Before they were made of resin, ivory billiard balls nearly led to the extinction of elephants in Ceylon, now Sri Lanka (Credit: iStock)

In fact jeans are an example of “skeuomorphism” (pronounced skyoo-o-morf-izm), a concept first invented by archaeologist Henry March in 1890. There are more definitions than you can count, but broadly it refers to the aspects of an object’s design that no longer have a function.

“What’s interesting to me is that there are traces in many objects that can tell us something about where they came from,” says Dan O’Hara, a philosopher of technology from the New College of the Humanities, London. Though they’re often overlooked, these hangovers from the past are ubiquitous.

Take suits. Oddly, two and three-buttoned suit jackets across the globe are sold with buttons that can never be fastened. It can be traced back to a very fat British king, Edward VII, who started leaving the lowest button on his suit undone sometime around 1900. In order not to embarrass him, the rest of court started doing it too.

It’s not like we actively notice many skeuomorphisms  – “We don’t look at jeans and say ooh rivets, cool,” says O’Hara – but they’re added because we’re used to products having a certain look.

Though electric cars don’t need cooling grilles – batteries don’t get as hot and they’re chilled in a different way – many have them anyway to avoid looking weird.

And no object is more guilty of this than the car. For decades, early cars were basically horse-drawn carriages without the horses. They kept their boxy shape, interior layout and just like old times, the power source remained firmly in front. They were even described in terms of their horsepower.

After a century of evolution they’re been transformed. Their current shape is largely driven by aerodynamics and the needs of the combustion engine, which is bulky and produces a lot of heat. Now as electric cars enter the market, we’re on the cusp of a new revolution. Forward-looking designers are thinking up cars that look futuristic and a little bit alien. In silent, engine-less cars, hoods aren’t really necessary and though artificial sounds are required for safety reasons, engines need not have the roar of gasoline exploding. How about a hum of tweeting birds instead? 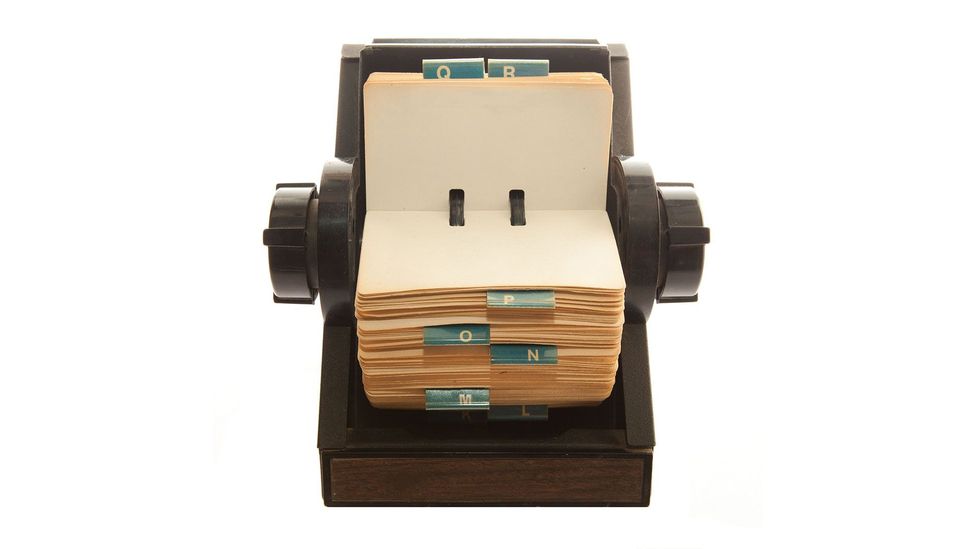 Back in the 1950s, rolodex cards were a popular way of storing the details of business contacts (Credit: Alamy)

But the public like cars to look a certain way. Though electric cars don’t need cooling grilles – batteries don’t get as hot and they’re chilled in a different way – many have them anyway to avoid looking weird. They’re purely aesthetic and often made of rubber. Meanwhile hybrid cars such as the Toyota Prius make artificial sounds to make them sound more like normal combustion engines.

At its most basic, the concept includes mimesis, or one material masquerading as another. This includes laminate flooring intended to look like the natural wood of the past, retro plastic hair combs dyed to look like tortoiseshell, and resin billiard balls emulating those made of ivory. This form is almost as ancient as civilisation itself.

Over six thousand years ago in the southern Levant, modern Jordan, the Ghassulian people discovered how to work metal. Previously they had constructed tools, such as axes, from stone. Now they started using copper.

This new material was much more versatile, since it didn’t have to be painstakingly chipped into shape. It led to a whole range of elaborate inventions, from crowns to ornamental sceptres. But many objects created in this era retained a decidedly stone-age look.

“It has been true since the beginning of invention that new designs look like the old ones,” says Don Norman, the director of the Design Lab at University of California, San Diego. Then, as today, entirely new materials took a while to catch on. “If it doesn’t look the way I expect it to look, I have no clue what to do with it.”

But occasionally, copycat design happens almost by accident. In 1949, Frank McNamara was dining with clients at Majors Cabin Grill Steak House, New York. When the bill arrived, he realised that he had left his wallet at home in another suit. There are a lot of rumours about what happened next.

Despite the rise of digital technology, the cockpits of the most high-tech airplanes are still laden with analogue dials, levers and knobs

Some people say that his wife drive over to deliver some cash, while others insist he signed a note promising to pay the restaurant back – a practice that was unheard of at the time. One source says the dinner itself never actually happened. Regardless of the truth, a year later McNamara returned to the restaurant and paid with a small cardboard card known as the Diners Club Card. This was a landmark step in the development of the credit card – the first multipurpose charge card.

“I had a look in the archive to the first 2,000 that they made. They’re not the same shape that they are now,” says O’Hara. Instead the cards were rounded at the top two corners. “It’s a really unusual shape. The only other example is a rolodex card.”

As readers over a certain age will know, a rolodex is a rotating file device used to store the names and addresses of business contacts. This Linkedin for the pre-digital age involved cardboard cards suspiciously similar to credit cards but stamped down one side and – historically – curved at the edges. Information was hand-written onto the card and then slotted back into the file. “They’re very odd objects, so it’s clear to me that the originals were made from rolodex cards,” says O’Hara.

Eventually the rounded corners were dropped and the cards were cast in plastic. But the dimensions of the card never changed. Today we’re locked into this shape. Every debit and credit card in the world has to resemble a rolodex to fit card machines.

Strictly speaking this is “path dependence”, design limited by decisions made in the past. And like its older sister skeuomorphism, there are plenty of examples. 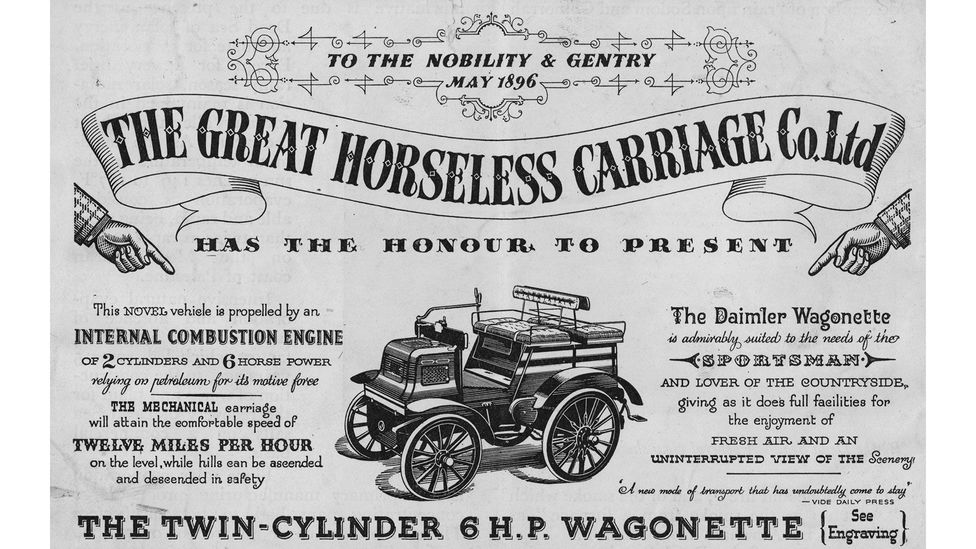 The most famous case is the keyboards of modern computers. The QWERTY layout, the name of which comes from the first six letters on the upper left-hand row, was created by newspaper editor Christopher Latham Sholes in the early 1870s. According to urban legend, the design was intended to make typing slow and awkward. In reality, it made his writers even quicker.

At the time typewriters had a major flaw: if you pressed down on two neighbouring characters in quick succession, the whole thing would jam. To overcome this he designed a keyboard where the letters that often follow each other in a sentence, such as “ST”, were placed further apart.

Eventually this layout was copied onto other technologies. There’s no longer any mechanical need for it and others such as Dvorak, a simplified keyboard invented by educational psychologist August Dvorak in 1936, require less finger movement and boost typing speed. Yet QWERTY has stuck because that’s what we all learned on.

But if there’s one place you really don’t want to mess with established design, it’s thousands of feet above the Earth. Despite the rise of digital technology, the cockpits of the most high-tech airplanes are still laden with analogue dials, levers and knobs. They no longer connect to flying systems directly, instead simply linking to computerised ones. Old-school pilots expected old-school controls, which meant that the next generation learnt on this style too, and so on. The result: the controls of modern aircraft look very similar to those from the 1930s.

It’s even happened on our roads. From Roman times until the 1700s, traffic generally kept to the left side of the road. Some experts think this was convenient for travellers on horseback, who could hold the reins with their left hand and keep their right hands free to wave at, or defend themselves from, passing riders on the right.

Then the balance of power shifted. In the United States, wagons were increasingly common on the roads. Drawn by up to 20 animals, they were a popular way of transporting goods over long distances – and the men helming these vehicles liked to drive on the right. They’d sit on the rear leftmost horse, so it was easier to make sure oncoming traffic didn’t get too close if it was also on the left.

There wasn’t any arguing with the momentum of 20 1,000-pound (453kg) horses. Other road traffic quickly got used to driving on the right and the rule stuck. Hundreds of years on, right-side driving is irreversibly embedded in US street design.

There are clues to the past all around us, hidden in designs that are reassuringly familiar. Some may be holding us back – but others are just too nostalgic to mess with. As they say, skeuomorphism is the most sincere form of flattery.