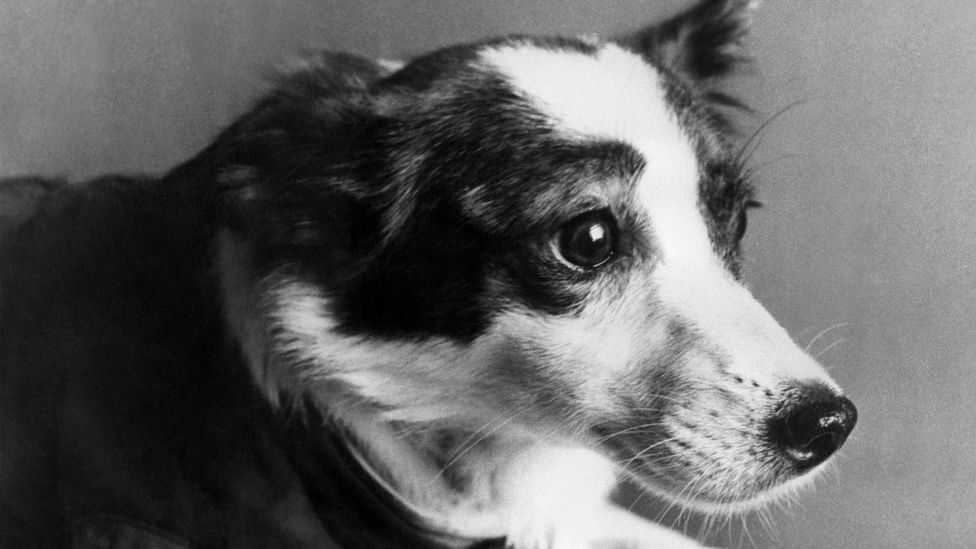 By Richard Hollingham 2nd November 2017
Before cosmonauts and astronauts, a team of Soviet space dogs blasted into the inky unknown. And the descendants of those that survived ended up living in the last place you might expect.
T

The engineers who sealed Laika into a narrow, windowless Sputnik 2 space capsule on 3 November 1957 knew it was the last time they would ever see her. Following the success of Sputnik 1 on 4 October, Soviet leader Nikita Khrushchev had ordered a dog be flown within a month. But in the scramble to get the spacecraft ready in time, no-one had figured out how to get the animal back alive.

“This was always going to be a one-way mission,” says Doug Millard, space curator at London’s Science Museum. “It was at the height of the Cold War and this was serious stuff, part of a struggle between the superpowers.”

Once successfully in orbit, the world was told how Laika would survive a week in comfort, with plenty of food and water, before passing away painlessly. It emerged in 2002 that the dog had only lasted seven hours before dying of panic and heat exhaustion.

Still, for the Soviet Union, the mission was another propaganda coup and space dog Laika became a national hero. And, by launching a sizeable 113kg (249lb) capsule with a live animal on board, it appeared the Russians were way ahead of the Americans when it came to space and missile technology.

“You could argue that it had as big an effect as the first Sputnik,” says Millard. “It certainly compounded the impact on the United States – as it was so heavy, it confirmed the Soviets had the ability to put a nuclear warhead on a rocket and deliver it to the US.” 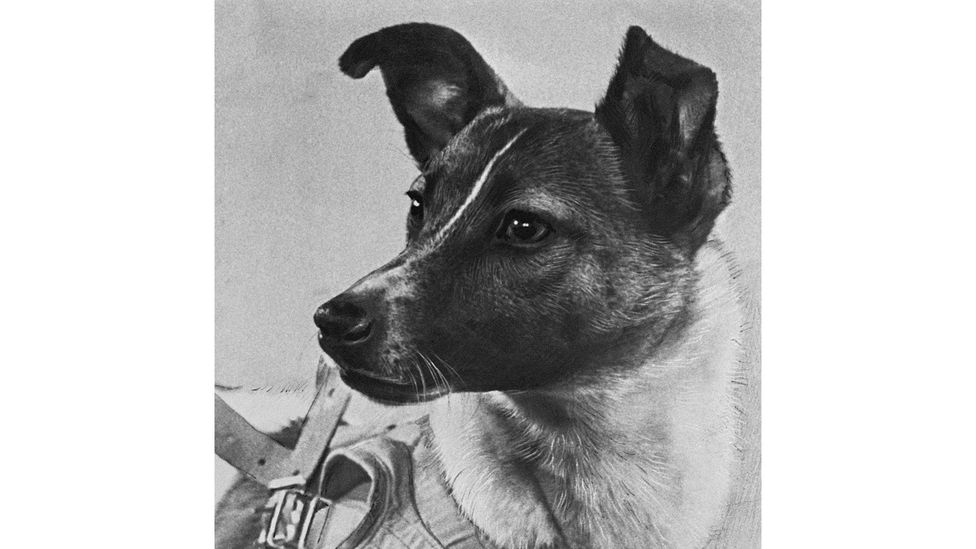 The Soviet Union had been flying dogs in space since the early days of its space programme, when they were scrambling to reverse-engineer Wernher Von Braun’s captured V2s. The first flights were sub-orbital, sending the canines out of the atmosphere and back to Earth. Unlike Laika, most of the dogs survived.

Whereas the Americans preferred to experiment on monkeys and chimps, the Russians chose dogs because they were easier to train, formed emotional bonds with humans and were readily available. All were female mongrels and, although some were donated, most were strays.

“There was then a question of how to catch them,” says Millard. “You have this bizarre scenario of members of the space programme chasing round the streets of Moscow looking for likely dogs, and persuading them to be captured.”

“They want the dogs to be healthy, so they can’t mistreat them,” says author Vix Southgate, who writes and illustrates children’s books on the space programme. “They’re given a name, their own kennel and they’re well fed – you want a dog that’s happy with what it’s doing and wants to please the people it’s doing it for.”

The dogs were subjected to detailed medical tests and put through extensive training programmes, so they became comfortable with being strapped into space suits and confined in capsules. Most were flown in pairs, giving scientists the opportunity to compare data between two animals.

Within three years, Soviet space dogs would again make history. On 19 August 1960, mongrels Belka and Strelka were blasted into orbit alongside two rats, a rabbit, fruit flies and plants. 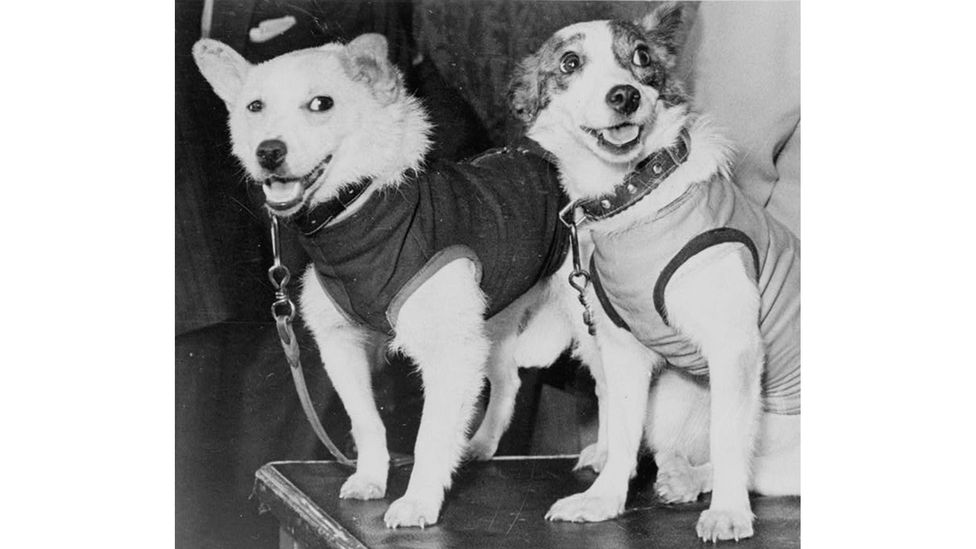 Belka and Strelka both survived their trip into space, becoming lauded around the world (Credit: Alamy)

“The launch went well, all the medical data coming back from their spacesuits was fine and normal,” says Southgate, who is currently writing a book on the dogs. “But, by the time they got into orbit, neither of them was moving.”

Then, during the 4th orbit, Belka started vomiting. “It was that which woke them both up,” Southgate says. “From the video recorded on board, you can see the dogs moving around and barking, medical data showed they were calm and not overly stressed.”

After 17 orbits, ground controllers fired the retro rockets and the dogs descended back to Earth. When the capsule was opened, Belka and Strelka appeared happy and unharmed by their experience.

Within hours they were on the celebrity circuit. The dogs appeared on the covers of newspapers and were feted on TV chat shows.

A few weeks later one of the puppies showed up at the White House with a little Russian passport - Andrew Hager, Presidential Pet Museum

“Their fame spread internationally – there were stamps, postcards, they were absolutely everywhere,” says Southgate. “It was quite phenomenal.”

Then the story takes on a whole new dimension.

In June 1961, two months after Yuri Gagarin became the first man to orbit the Earth, President John F Kennedy and Soviet Premier Khrushchev held their first joint summit in Vienna. By all accounts it was a difficult meeting. During dinner, however, Jackie Kennedy started talking to the Soviet leader about the space dogs.

“He mentioned that Strelka had had puppies, and she said you must send one of those puppies to me,” says Andrew Hager, historian in residence at the Presidential Pet Museum. “A few weeks later one of the puppies showed up at the White House with a little Russian passport.”

After being screened for surveillance bugs by the FBI, the dog – Pushinka – took up residence with the First Family. Although the President was allergic to dogs, Pushinka spent time with the children and became friendly – very friendly – with another White House dog, Charlie. The canine couple ended up having puppies. “I like to think of it as a Cold War romance,” says Hager. 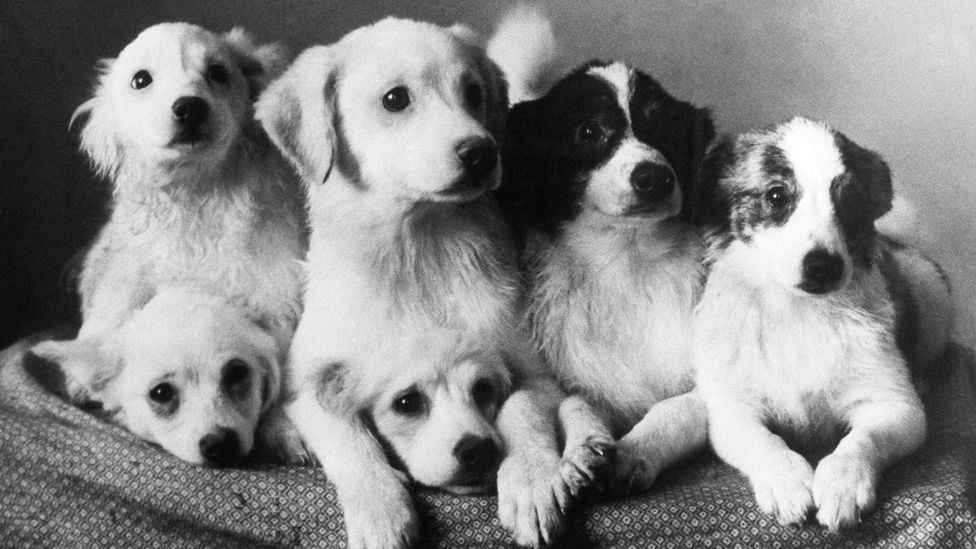 The dogs were an invaluable step towards humans successfully venturing into space (Credit: Alamy)

But the gift of Pushinka, he believes, had greater diplomatic importance and even helped prevent World War Three. “It’s more than just a gift, I think of Pushinka as being significant historically,” Hager says. “Kennedy and Khrushchev had this back-channel communication going on and exchanged several gifts during that time period.

“That really helped them back down when it came to the Cuban Missile Crisis a year later,” says Hagar. “I like to think of Pushinka as part of the thought process as they were going through the missile crisis, and a reason why he didn’t listen to the hawks in the White House who wanted to bomb Moscow immediately.”

Two of Pushinka’s puppies – nicknamed “pupniks” by the President – were donated to American children who wrote to Jackie Kennedy asking to look after the dogs. When Kennedy was assassinated in 1963, Pushinka was given to a White House gardener and later gave birth to another litter of puppies.

Hager has attempted to track down Pushinka’s descendants but, so far, has drawn a blank. “Certainly, it’s still possible there are descendants of these Russian space dogs out there in the United States,” he says.

As for the space dogs themselves, after the first successful flights of astronauts, the programme was wound down. But Millard believes these canine space pioneers deserve to be remembered as more than just a historical side-bar.

“I think they still don’t get the recognition they deserve, and nor do the chimps that the Americans flew,” says Millard. “The way to the stars for humans was paved by dogs and monkeys.”