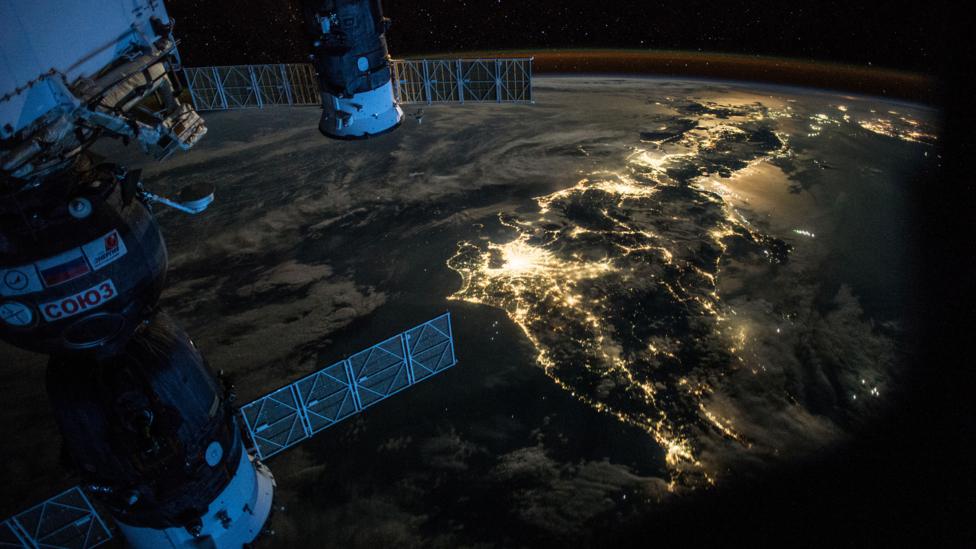 By Miriam Quick / Illustrations by Rebecca Zhou 29th October 2017
Asteroid mining, lab-grown meat, and more: these five watershed moments in science and technology will change the world - and some sooner than we may think. 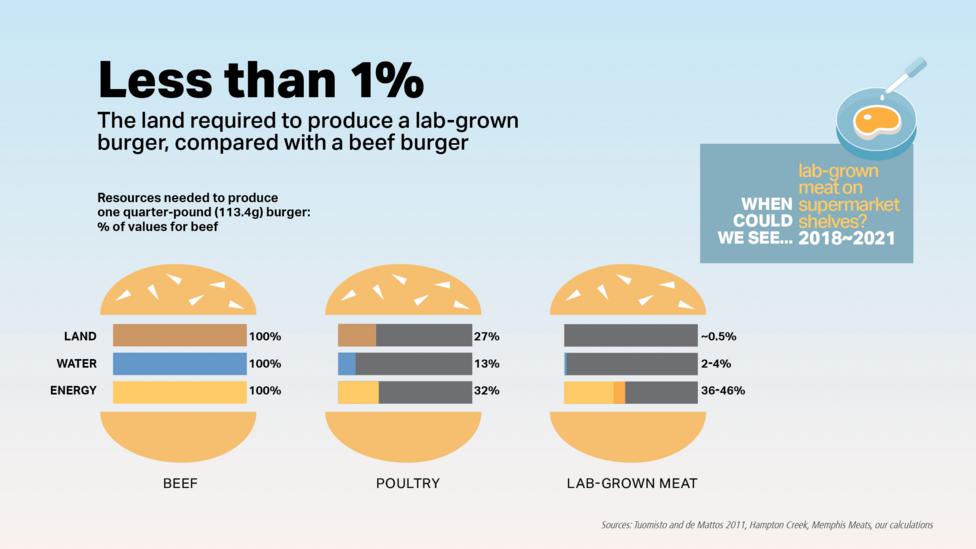 What if meat was more environmentally friendly?

The eco-burger of the future will be grown in a vat, by taking animal stem cells and feeding them nutrients until they grow into pieces of tissue large enough to eat.

This is the technology behind lab-grown meat, also known as cultured or ‘clean’ meat. While it may not sound exactly appetising, it’s much kinder than traditionally-reared meat: the donor animals need not be slaughtered.

Lab-grown meat has a much smaller environmental footprint, too. A 2011 study calculated that growing 1kg (2.2lb) of meat from cells used over 200 times less land and around 30 times less water than raising a cow for 1kg of beef – and around half the energy. (A more recent, less optimistic analysis suggests lab-grown meat could actually be more energy-intensive than chicken, though still better than beef.)

We may not have long to wait. The world's first lab-grown hamburger was cooked and eaten at a London news conference in 2013. Earlier this year, a US startup announced it had created lab-grown chicken and duck. Another claims it will be selling lab-grown meat products in stores as early as 2018. Scaling up production remains a challenge, which is reflected in the eye-popping cost – currently about $9,000/lb ($19,800/kg) for lab-grown chicken – though this is falling fast.

With livestock production currently gobbling up 80% of the world’s agricultural land, less resource-hungry meat alternatives will be vital in decades to come. 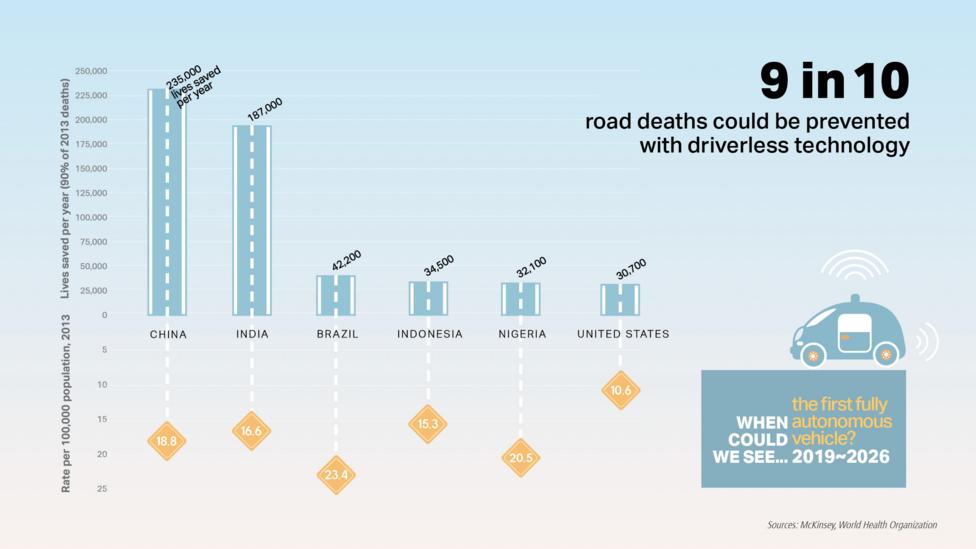 What if we could prevent 90% of road accidents?

The sheer loss of life on the world’s roads is staggering. More than 1.2 million people died because of traffic accidents and 20 million were injured in 2013, according to the most recent data available. Nearly 40% of deaths were in China and India.

Nine out of every 10 road accidents happen because of human error, a term that covers everything from speeding and drink driving to simply not paying attention. Industry experts project that switching to automated vehicles could eliminate these accidents and so prevent 90% of traffic-related deaths. Using the 2013 figures as a baseline, this would save around 1.1 million lives a year, which would amount to a revolution in public health on the scale of anti-smoking initiatives or vaccination.

Tesla’s Elon Musk says the first fully automated vehicle will be developed by 2019, but others predict this will not happen until 2026 or later. It will likely take much longer until there are enough autonomous vehicles on the roads for the accident rate to come down substantially. And these vehicles will still not be 100% safe. They could be hacked, or face excruciating moral dilemmas, such as being forced to choose between killing a passenger and killing a pedestrian.

But we can be confident they'll never play on their phones while moving, or nod off over the steering wheel – leaving you free to do just that. According to Musk, in a couple of years you’ll be able to fall asleep at the wheel of a self-driving car and come to no harm. 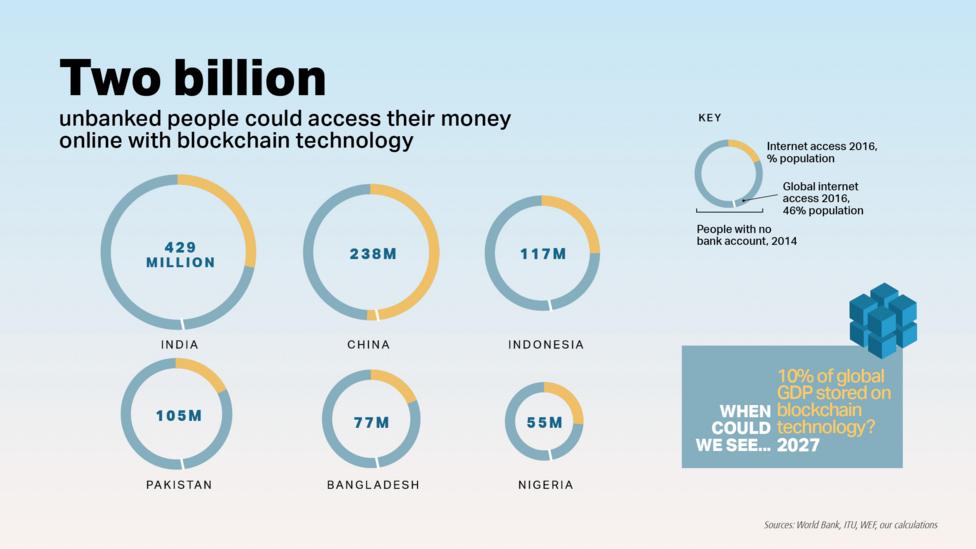 Two billion adults have no bank account – because they can’t access a bank, they are culturally excluded (particularly women) or their incomes are too low. Without access to finance people are reliant on cash, cannot save or invest effectively and can fall deeply into debt.

Blockchain advocates believe the answer is to forget about banks altogether. If anyone with an internet connection and a mobile phone could send, save and borrow money peer-to-peer, the global economy could look very different. Cryptocurrencies might become the new cash. Low-income people could open small businesses, take out insurance and send money abroad easily and cheaply.

Best known as the tech behind Bitcoin, blockchains use distributed networks and cryptographic proofs to create secure, virtually immutable digital records. Financial transactions, contracts and documents verifying ownership can all be stored on blockchains.

The technology has applications beyond finance. Blockchains could help fight fraud and corruption – by protecting electronic voting systems, for example. Countries such as Sweden and Georgia are already using them to secure government records and record land ownership. And a 2015 McKinsey survey predicted the first government will collect taxes using blockchain technology by 2023.

But while blockchains are already in use, applying them more broadly could profoundly disrupt existing industries in unpredictable ways. Whether the technology helps reduce poverty will depend on exactly how it is rolled out. And if the world’s poorest are to feel any benefit, they’ll need access to the internet first. 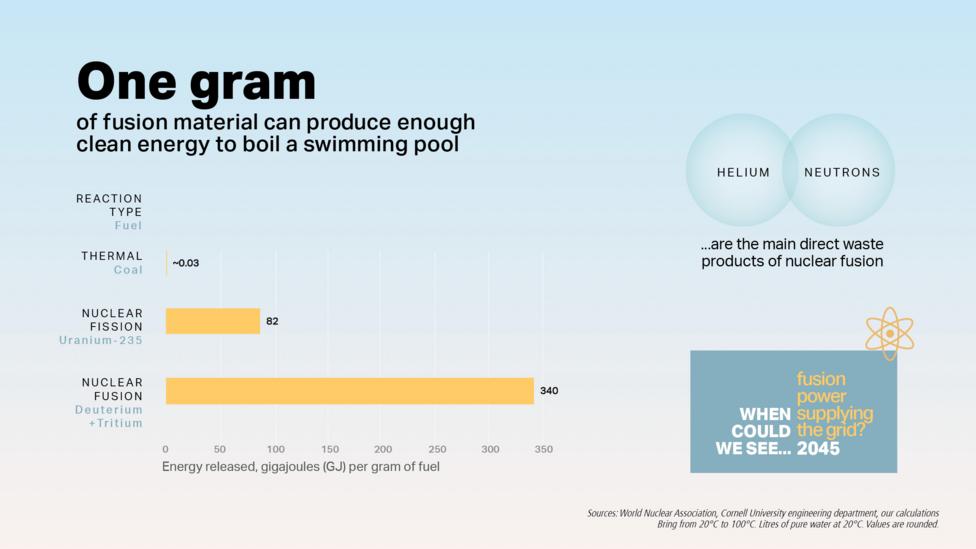 What if we could source clean energy from seawater?

In contrast, fusion reactions are safe and produce virtually no radioactive waste. Their main waste product, helium, is a non-toxic gas used in everything from party balloons to the Large Hadron Collider. And fusion fuels are easy to find: deuterium is abundant in seawater and tritium can be made from lithium. In a fusion reaction, these fuels produce about four times as much energy per gram as uranium fission, or 11.3 million times as much as burning coal. A single gram would produce enough heat to boil the water in a swimming pool.

The trouble is, we still can’t get fusion to work for us. Fusion reactions require sustained temperatures of millions of degrees Celsius. Research has been ongoing for decades but, as of 2017, it takes more energy to get the reaction going – and keep it going – than you get out the other end. This means it’s not a viable way of generating electricity yet. There’s an old joke that fusion power is only 30 years away – and always will be.

But this could change. Important technical challenges have been solved in the last 20 years and investment continues to pour in to fusion technology, lured by the tantalising prospect of a virtually inexhaustible clean energy supply. Thirty-five countries are collaborating to build the world’s largest tokamak (magnetic fusion device) in Southern France, which will aim to produce positive net energy for experimental purposes by the end of 2025. But it will be several years longer until this energy can be harnessed to power our homes, cars and offices. 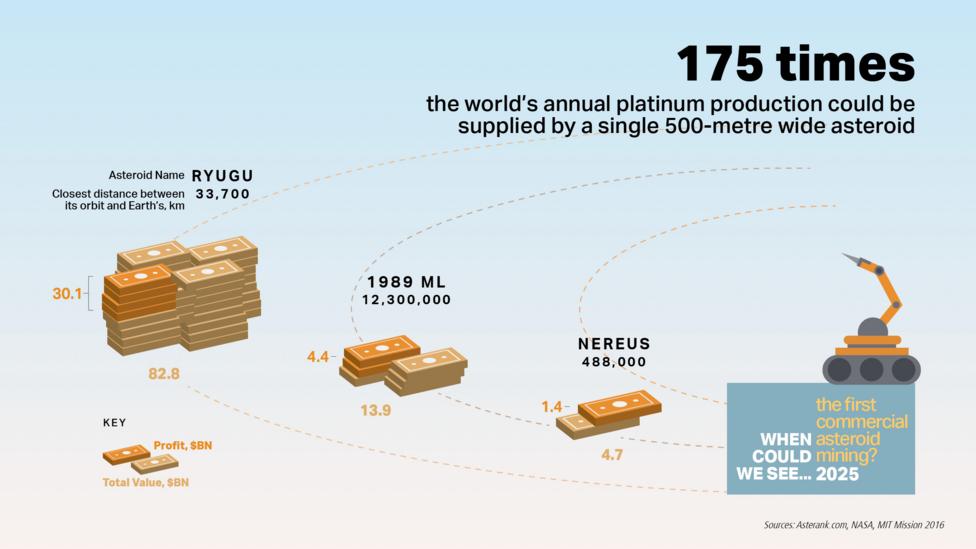 What if we could mine the skies for resources?

Asteroid mining may sound like something out of Star Trek, but several companies take it very seriously. They include Planetary Resources, a company set up in 2012 whose advisors include film director James Cameron and Google co-founder Larry Page.

Many asteroids in our Solar System are rich sources of valuable minerals such as platinum and gold. They can also contain water, which could be collected to make rocket fuel and supply future space-based communities.

Mining the skies is an audacious feat of engineering. Accessing small rocky bodies orbiting tens of millions of kilometres from Earth, landing robotic miners on them and transporting back the ore will be both challenging and expensive. To home in on the most valuable asteroids, we will first need to send up fleets of small prospecting probes.

A 2012 Caltech study put the cost of capturing and returning a single 500-tonne, 7m-wide (23ft), near-Earth asteroid to high lunar orbit at around $2.6 billion. It’s a lot of money, though not an unimaginable amount.

And the potential rewards are quite literally astronomical. One platinum-rich asteroid 500m (1640ft) across could supply around 175 times the world’s current platinum output, or more than the world’s entire reserves of platinum group metals, according to MIT’s Mission 2016 project.

We may not be as far away from mining asteroids as you might think. Chris Lewicki, CEO of Planetary Resources, expects we’ll be extracting water from asteroids on a commercial scale by ‘the middle of the 2020s’, less than 10 years from now.