Loading
Space Station | Space
Will we ever have genetically modified astronauts?
Share using EmailShare on TwitterShare on FacebookShare on Linkedin 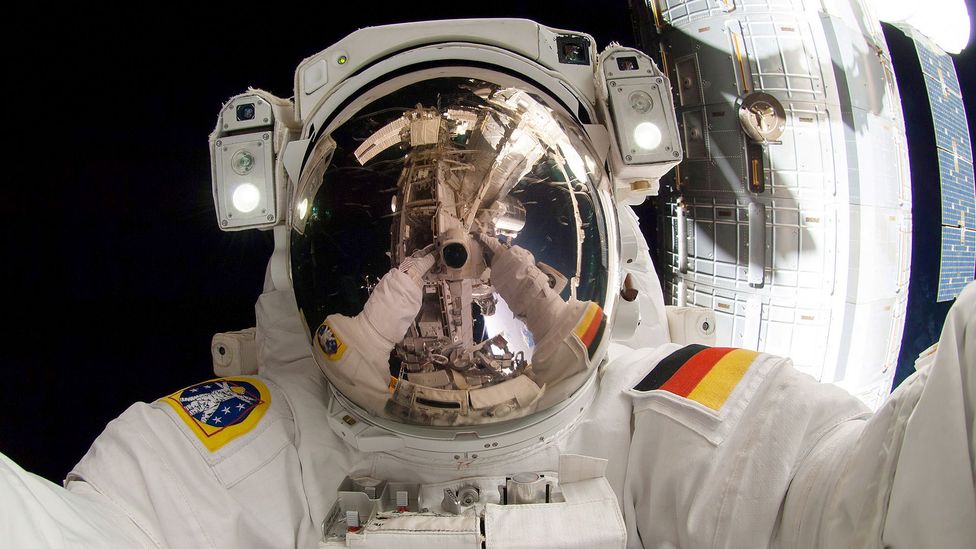 By Richard Hollingham 24th November 2017
Life in space is difficult – and it's not an environment we evolved for. If we’re in space for long journeys, should we evolve along the way?
I

It takes something special to be an astronaut – an extraordinary combination of bravery, fitness, intelligence, lightning-fast decision-making and calmness under the most extreme pressure. It's known as "the right stuff".

When Nasa was selecting its first spacemen in the late 1950s, it looked no further than the best military and test pilots the United States had to offer. The Soviet Union did the same, only it also specified that its cosmonauts had to be no taller than 170cm (5ft 6in) – to fit in the tiny Vostok capsule – and parachutists, so they could eject from the spacecraft as it re-entered the atmosphere. Unlike the Americans, it also recruited a woman.

Since those early days, there have been scientists, engineers and medical doctors selected for spaceflight. But for the most part, 60 years on, those original ‘right stuff’ criteria for the ideal astronaut still hold true. Take the European Space Agency’s (Esa) most recent astronaut intake in 2009, for example. Of the six astronauts selected, three are military pilots and a fourth is a commercial pilot. The other two astronauts’ lists of hobbies include skydiving and mountaineering.

But despite selecting the best of the best, humans are still poorly suited to life in space. We are products of 3.8 billion years of evolution in a comfy 1g oxygen-rich biosphere, protected by a magnetic bubble (the magnetosphere) from the harshness of the Universe. Away from the Earth, astronauts are bombarded by cosmic radiation and suffer nausea, muscle and bone loss, deteriorating eyesight and even weakened immune systems as a result of zero gravity.

Esa astronaut, Luca Parmitano, says he was astonished how rapidly his body changed during his five-and-a-half months in orbit on the International Space Station. “There’s an adaption that feels like a transformation,” he tells me. “You see your legs get skinnier and your face becomes round – slowly your body gets into a new state of normality.” 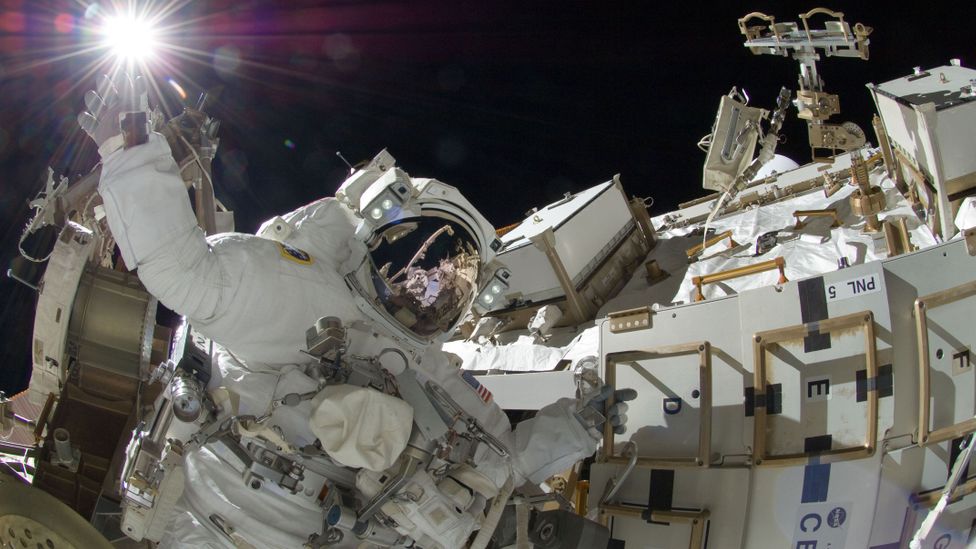 Away from Earth, astronauts are bombarded with cosmic radiation, and begin to suffer ailments caused by low gravity (Credit: Alamy)

He also noticed changes in the way he moved. “Initially, you tend to move horizontally because you’re afraid of knocking into things and you have to get used to parts of your body moving differently,” he says. “After about six weeks, you start moving vertically again – you have adapted to space, you are extra-terrestrial.”

But those adaptations only go so far. “Legs are not very useful in space,” says Parmitano. “I wouldn’t chop them off but why don’t I turn them into hands? Having two sets of hands would be really useful in space when you can hold onto handrails and use the other hands to work.”

“A stabilising tail would be incredibly interesting, because three points of stability is better than two,” he says.

But what if instead of putting the effort into adapting space to humans, we do as Parmitano suggests and adapt humans to space?

With astronauts spending more time in space – the current record is 437 days, held by Cosmonaut Valeri Polyakov – and long-duration missions planned by space agencies to the Moon and Mars, considerable thought is going into conceiving spacecraft and space habitats to keep astronauts fit and healthy. Heavily shielded to protect from radiation, and with sophisticated life-support systems, these might be engineered to spin, simulating gravity.

But what if instead of putting the effort into adapting space to humans, we do as Parmitano suggests and adapt humans to space?

“You can imagine designing a future space-faring human, that’s not shocking or surprising but something we could do,” says Parmitano. “Maybe we have to.”

It’s one of the areas being considered at the annual Tennessee Valley Interstellar Workshop in Huntsville, Alabama. Here, space agency scientists, engineers, and enthusiasts meet to devise future colonies in orbit around the Sun and starships, travelling over generations, designed to take humanity to seek out strange new worlds. 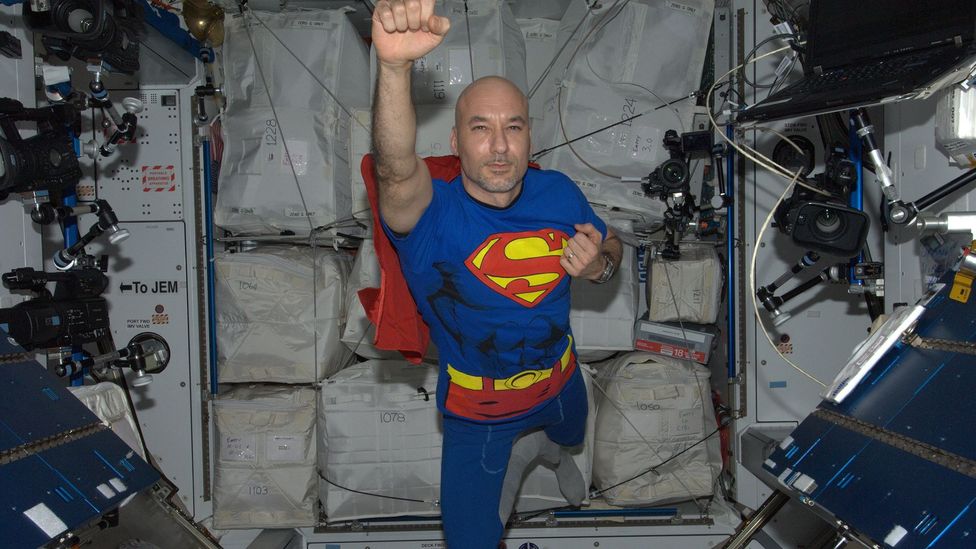 Does the human form need to be tweaked to allow us to thrive on long-duration space missions? (Credit: Esa/Nasa)

Neuroscientist Robert Hampson, who studies how radiation affects the brain, chairs a workshop working group on human adaptation. “It would take a lot of time and material to terraform a planet for instance,” he says. “But we could find a way to make humans more adaptable to less gravity and a different atmosphere.”

To some extent, like today’s astronauts, future space colonists are likely to be selected on the basis of their suitability for long-duration spaceflight. They might have good natural resistance to radiation, high bone density or a strong immune system. These traits would be passed onto the next generation, who would only know the space environment.

“If you take a young couple on a starship to form a colony, they’re going to have children that will be adapted to that colony – not to Earth,” says Hampson. “The parents have made that decision for their offspring and the generations that follow.”

There’s a moral imperative to give the child every advantage not just to survive but to thrive – Robert Hampson, neuroscientist

Over many generations, therefore, these spacefaring humans might become different to their earthbound ancestors. But not that different. Almost certainly, they would still only have a single pair of hands. “Evolution is too slow,” Hampson says. “The question is, how much of a boost do we give evolution?”

I’ve written previously about the perils of raising kids in a bleak, barren, alien environment such as Mars. But genetically engineering a generation of space people could overcome some of the moral objections. It would involve genetic engineering of human embryos, technology already being developed to combat inherited disorders. 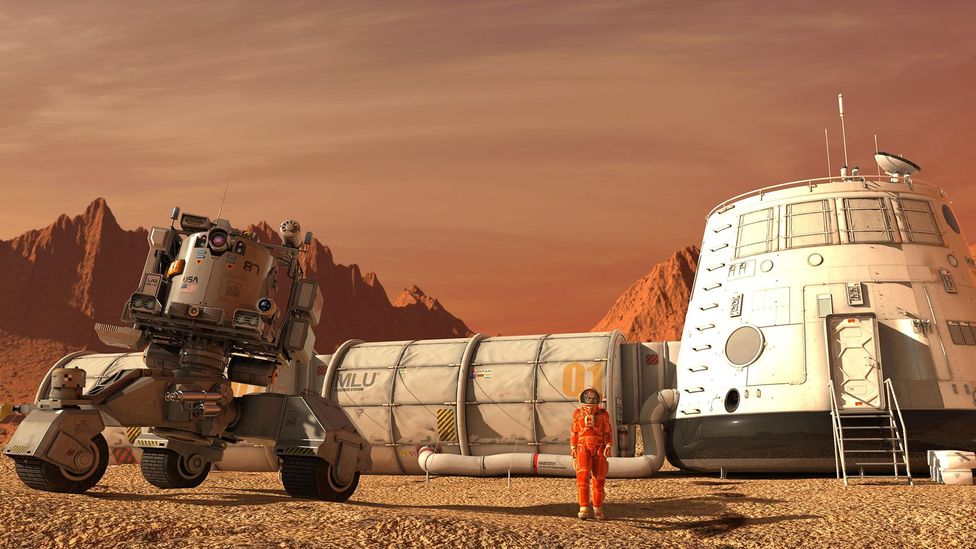 If astronauts are engineered to suit a life in space, will they then be at a disadvantage when it comes to life on another planet? (Credit: Alamy)

“There’s a moral imperative to give the child every advantage not just to survive but to thrive,” argues Hampson. “To live, to work, to be successful, to be healthy and then to produce their own children and offspring.”

The chances are when humans begin to leave the Earth in any significant numbers, we are going to have to adapt to a new environment. Instead of searching for Earth 2.0, we could instead breed Human 2.0. They might even have four hands and a tail.

“It is more interesting to think of living in an environment that’s not limited by gravity,” says Parmitano. “The chances of finding a twin Earth are very small, the idea of new environments where humans could live is a lot more fascinating to me… but that’s just me!”