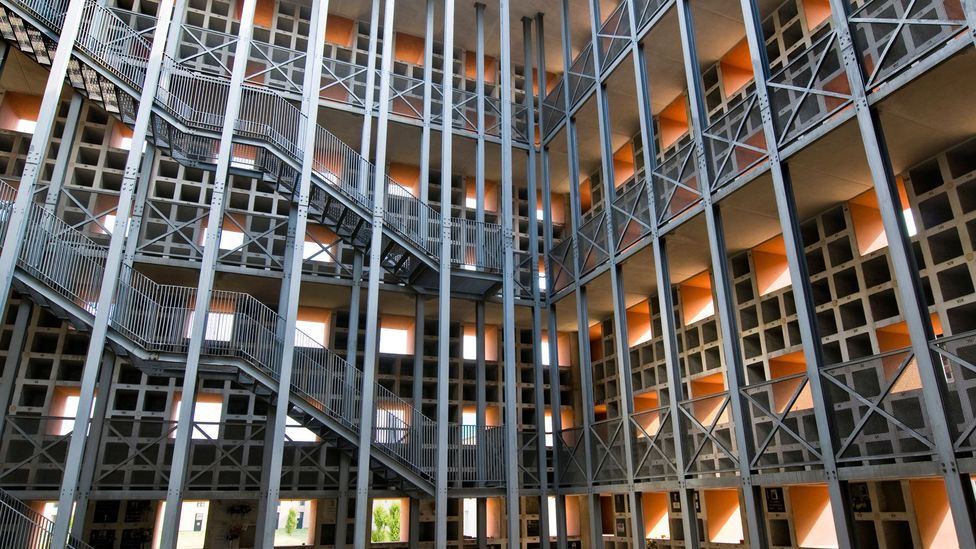 By Zaria Gorvett 28th November 2017
From Brazil to Israel, many countries are experimenting with a new kind of grave: a slot in a high-rise apartment block, purpose-built to house the dead.
I

In the last 50,000 years, it’s been estimated that around 101 billion people have lived and died on planet Earth. Like it or not, everyone alive today – and that’s more than seven billion of us – is likely to join them within the next century. So what will we do with all the bodies?

As human populations continue to expand and flood into crowded cities, traditional methods of handling bodies after death are coming unstuck. The issues range from a shortage of vultures in India – which has led the Zoroastrian community to abandon the ancient practice of sky burials in favour of dystopian “solar concentrators” instead – to the 40-year old corpses in Germany that remain mysteriously fresh after decades in the ground. In many European countries, it’s normal to re-use graves after 15-20 years. But recently some of their inhabitants have been refusing to rot.

Meanwhile in in Hong Kong, real estate is just as hard to come by for the dead as it is for the living. Many public columbaria, where urns are stored, are full, leading funeral homes to stash the ashes of hundreds of thousands of deceased in backrooms while the government searches for somewhere to put them. Even when they do become available, the highly prized niches – with just enough space to house a single urn –can cost as much as a luxury flat.

Enter a range of wacky and sometimes gruesome solutions, including liquidising partially decomposed remains with lime to free up space and allocating columbarium spots via a lottery system. But it’s perhaps the most counter-intuitive that has been garnering the most attention: vertical cemeteries.

These high-rise graveyards typically have several floors of coffins, neatly stacked in rows of shelves or drawers. They promise over seven times the space efficiency of the earthy kind, while doubling as attractive, if rather morbid, landmarks in their own right. 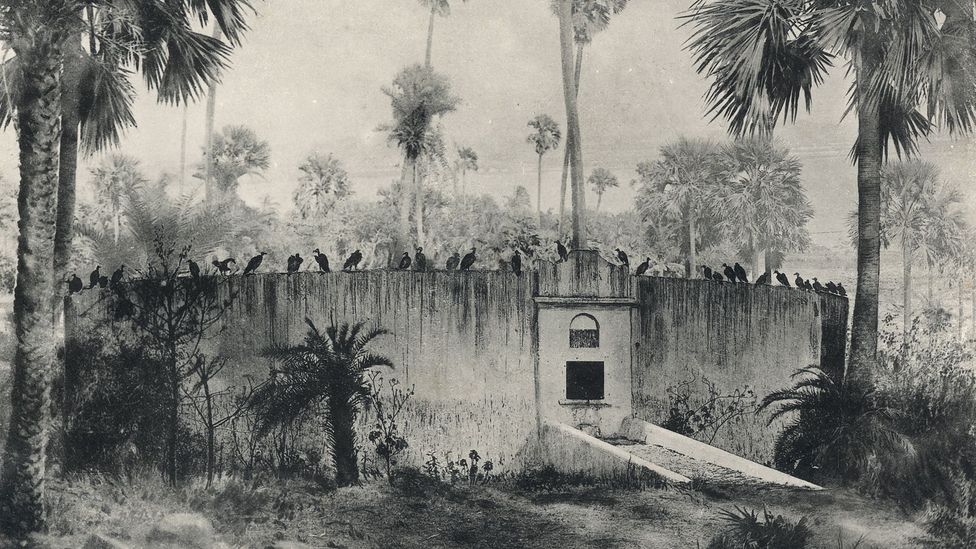 Such buildings already exist, from Israel to Brazil, with further designs being drawn up for towering cemeteries in cities as diverse as Oslo, Verona, Mexico City, Mumbai and Paris. Could they solve the problem? And will they catch on?

“The shortage of space is a significant issue. On my doorstep there are already a number of London boroughs that don’t have any burial space left,” says Gary Burks, manager of the City of London Cemetery and Crematorium in east London.

In cities with high Jewish and Muslim populations, the situation is even more urgent because cremation is a big religious taboo. One study predicted that if burials remain as popular in 2050 as they were in 2014, the world will need to set aside around another 2,509 square miles (6,500 sq km) of land – an area more than five times the size of New York City.

The Roman Catholic cemeteries in New Orleans, Louisiana are often referred to as “cities of the dead”, due to the high numbers of towering, sun-bleached tombs

As it happens, we’ve been laying people to rest in buildings for millennia. One example is the Les Innocents cemetery, which once existed at the very heart of Paris. In medieval times it was grossly overcrowded – a place where corpses were stacked so high that they could be seen over the churchyard walls.

It was mostly comprised of mass graves, with up to 18,000 dead squeezed into a single pit. Citizens took drastic action to clear more space, removing bones from the graves and depositing them in arched buildings along the cemetery walls called charnel houses. These early vertical burial sites weren’t entirely successful.

Many of the bodies were still decomposing when they were moved, leading one late 18th-Century visitor to describe entering Paris as like being “sucked into a fetid sewer”. Eventually the cemetery and its charnel houses were abandoned after heavy rainfall felled a subterranean wall between one of the mass graves and a neighbouring house, spilling corpses into their cellar.

Today above-ground burials are a lot more civilised. The Roman Catholic cemeteries in New Orleans, Louisiana are often referred to as “cities of the dead”, due to the high numbers of towering, sun-bleached tombs. These are favoured for entirely practical reasons, because the city was built on a swamp.

But by far the tallest is the Memorial Necrópole Ecumênica in Santos, Brazil. At the moment it’s a staggering 32-storeys high, with space to house the remains of 14,000 people. When it was first built in 1983 it was much more modest, but demand for “tombs with a view” was such that they kept adding extra floors. It’s currently being expanded yet again, to a final height of 108ft (32m).

In addition to rooms for urns, coffins and family mausoleums, there are wake rooms, crypts, a crematorium, a chapel, a vehicle museum and, oddly, a snack bar on the roof. The building is surrounded by acres of beautiful gardens, including a woodland and a lagoon with sunbathing turtles and its own waterfall. There’s even a conservation area where they plan to breed toucans. It’s pretty much as different from a dingy Victorian graveyard as you can get.

Each floor has rows of numbered blocks with up to 150 tombs equipped with a sophisticated ventilation system. “The relatives climb the elevator and when they arrive on the floor the coffin is already waiting,” says Priscila Trevisani, who has two grandparents buried there.

Just like in many European countries, burial plots are rented, rather than bought. Once a resident’s body has decomposed – a process which takes about three years – their remains can be transferred to the building’s ossuary.

“Because there’s no earth, there’s a greater sense of cleanliness. Everything is very bright with natural light as the sides of each aisle are open,” she says. “It feels very calm and tranquil. You can see a lot of the city and the sea from the higher floors because the building is built on high ground. On the other side you can see the [Serrat] mountain.” 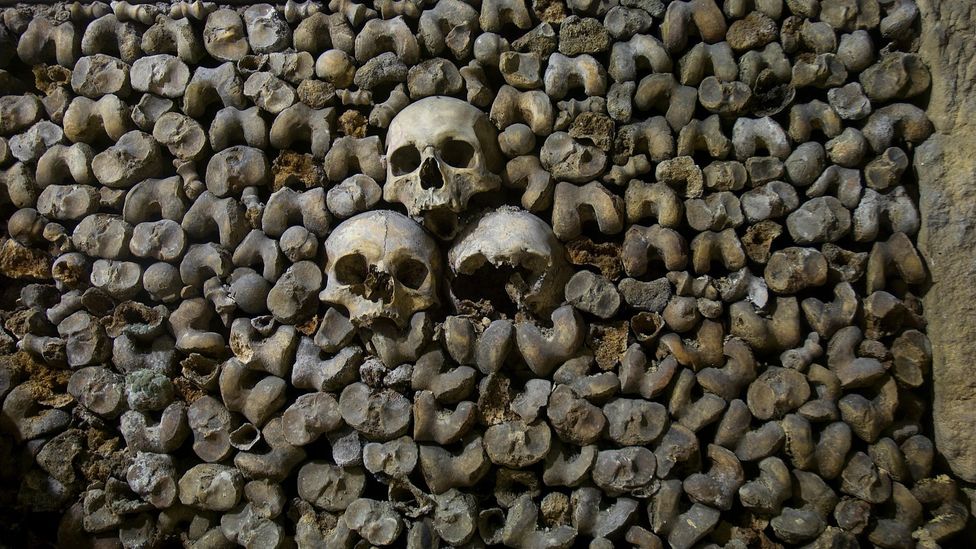 In Paris's catacombs, bodies were stacked on top of each other to use space as efficiently as possible (Credit: Alamy)

In Santos, space efficiency isn’t really a factor, but vertical cemeteries are beginning to pop up where it is. Following new rules in Tel Aviv that restrict the purchase of new outdoor graves, the Yarkon Cemetery is currently constructing a tiered high-rise with space for 250,000 burials. Initially ultra-orthodox Jews were sceptical, but it has since been declared kosher by local rabbis. The building towers contain pipes filled with dirt, so that each layer is still connected to the ground.

“Horizontal cemeteries are really not efficient,” says Chandrasegar Velmourougane, who designed a vertical cemetery for the Paris with his colleague Fillette Romaric in 2011. In a space 25-long (83ft) metres long and 25 metres wide, it’s possible to bury just 200 people underground – or around 1,480 if you bury them in layers above ground.

These unusual solutions also open up the opportunity to bring death into the 21st Century. “In the building we designed, each person buried there has their own commemorative wooden stick attached to the outside of the building. It only lights up once a year at the anniversary of the dead person. It’s a way of showing their presence to their surroundings,” says Velmourougane.

But there are practical considerations. The heavily overgrown gravestones in many Victorian cemeteries are a reminder that eventually, the relatives of the deceased – along with anyone that knew them – will die too. This is all very well if you’re buried underground, but centuries after they’re full vertical cemeteries could become derelict. The only way for the system to work is by recycling burial slots. 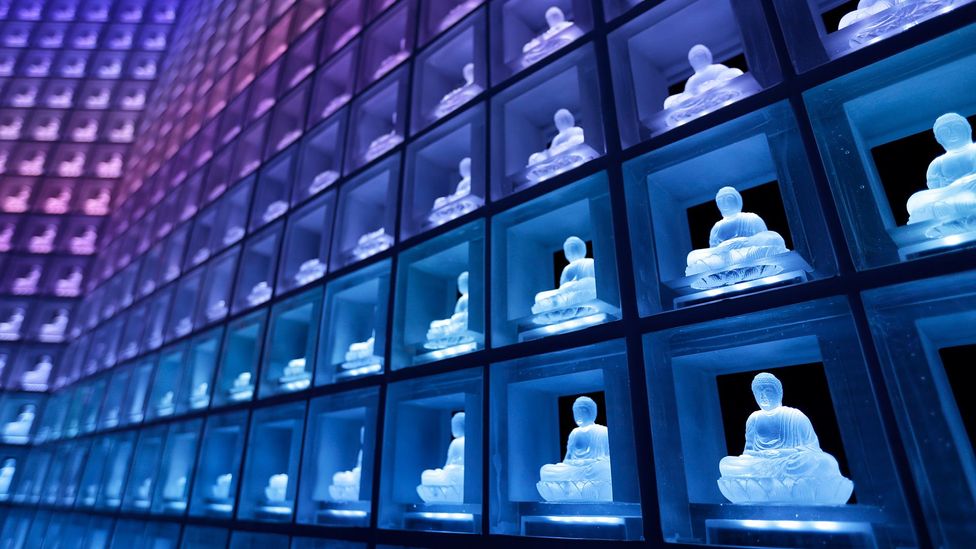 In facilities like this one in Japan, ashes are kept in urns behind glowing buddhas - allowing many people to be laid to rest in one room (Credit: Getty Images)

In London at least, there’s a long way to go before the public are comfortable with being exhumed – in fact, it’s not even legal. “It’s a really important point because whilst you’re allowed to reclaim a grave after 75 years of non-use, that’s not the case for above ground burial,” says Burks.

“I can see the simplicity of just clearing memorials from an area and building a mausoleum on top,” Burks adds. “But I would see recycling existing graves as a priority.”

Trevisani takes a more positive view. “We all thought it was a beautiful way to honour my grandparents. First by leaving them together, one next to the other, in the city they chose to come and with a pleasant view and a quiet place. But also because they weren’t taking up land in a common cemetery.”