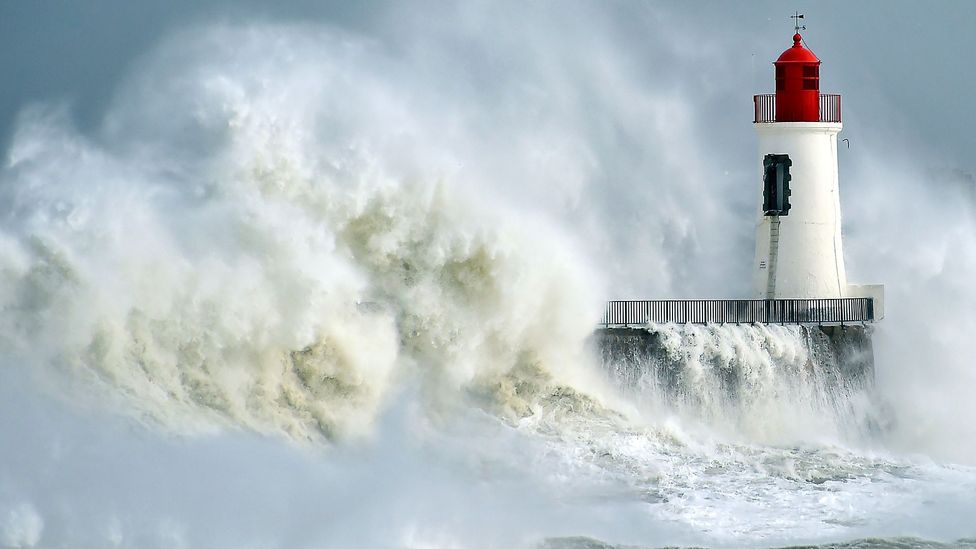 By Crystal Ponti 4th December 2017
Powerful storms on our planet’s surface can produce tremors that are helping geologists to see what the Earth’s interior might be like.
G

Given its location on the Atlantic seaboard of North America, Maine is no stranger to seasonal storms. I’ve lived through multiple hurricanes and a historic ice storm that paralysed my home state for weeks.

In November, however, around 484,000 residents in Maine – nearly two-thirds of the state – were left in the dark when a sudden and ferocious storm knocked out their power for more than a week in some areas. Most of us were completely unprepared as there had been few warnings of what was coming.  This was no ordinary storm.

Maine was hit by a “bomb cyclone”, a portentous term for a weather system that meteorologists call explosive cyclogenesis or, in less hyperbolic moments, rapid and intense low-pressure development.

The hurricane-speed gusts these systems generate can uproot trees and damage power lines. They can also bring flash flooding and erosion. They’re so powerful that a research team in Japan recently discovered that the ocean waves whipped up by bomb cyclones can light up the Earth’s interior with seismic energy. Monitoring these seismic signals could now provide geologists with new tools to help them explore the Earth’s internal structure.

Chris Legro, lead meteorologist with the National Weather Service in Gray, Maine, says the strong winds generated by bomb cyclones create large ocean waves, often in the order of 25 to 35ft (7.6m-10.7m). It is when these huge waves interact with the sea floor that they generate subtle shaking that can be measured around the world on seismographs.

“They [the seismic waves] travel through the Earth's interior to reach the other side of the globe, and can provide insight into the type of material they traveled through,” Legro explains.

Combining data from a network of more than 200 seismic sensors operated by Japan’s National Research Institute for Earth Science and Disaster Prevention, researchers Kiwamu Nishida and Ryota Takagi observed a rare, faint type of deep-earth tremor, known as an S wave microseism, which they attributed to a North Atlantic bomb cyclone off the coast of Greenland in December 2014. 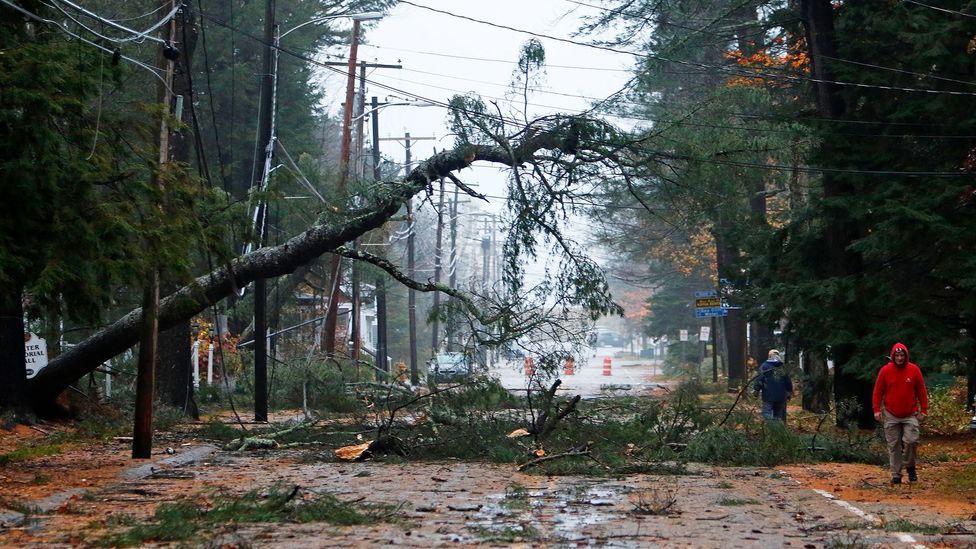 It’s the first time scientists have observed this particular type of tremor on the ocean floor. Previously, experts had only detected P waves (tremors that animals can feel before an earthquake), but were unable to detect the more elusive S waves (tremors that humans feel during earthquakes).

“I think the significance of this discovery is an incremental improvement in how we can investigate the structure of the Earth's interior,” says Chris Goldfinger, director of the Active Tectonics and Seafloor Mapping Laboratory at Oregon State University’s College of Earth, Ocean, and Atmospheric Sciences. “The use of storm-generated microseisms turns what was ‘noise’ into a potential signal, so it's very clever and something that was previously filtered out or ignored.”

A great deal of what we know about the Earth's internal structure has been learned through the use of seismic waves, usually from naturally occurring earthquakes, although sometimes from large explosions and other sources. By examining the speed these waves travel through the Earth at, it can reveal details about the composition of the rocks beneath the Earth’s crust. Reflections caused by changing rock types and between solid and liquid materials also cause seismic waves to bounce around, revealing yet more information. 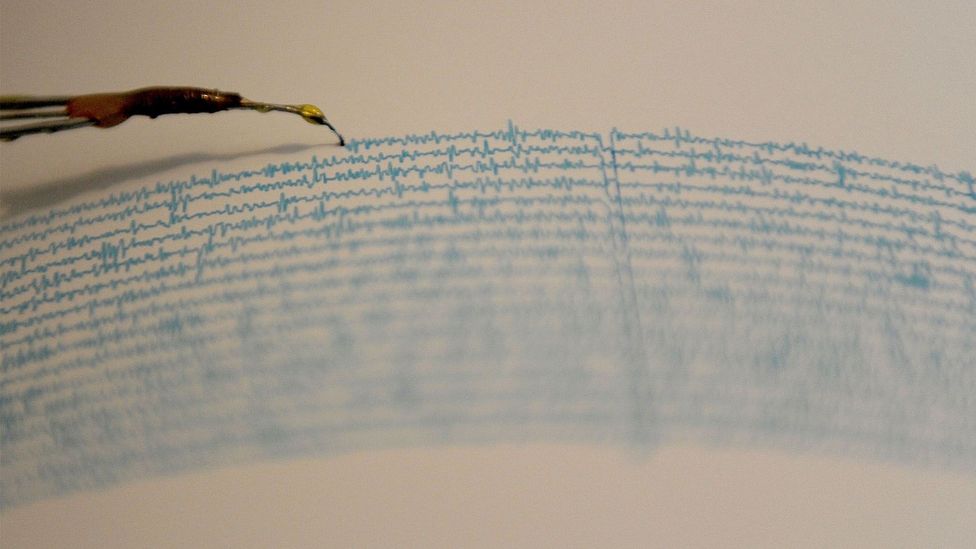 Large ocean waves produce tremors on the sea floor that can be picked up by seismographs around the world (Credit: PEDRO PARDO/AFP/Getty Images)

“Weather events are not used to do this at all, so that's what is unique about the discovery,” says Goldfinger. While earthquakes will remain the primary tool, weather events provide a new source of seismic waves that can be used to look into the Earth's interior, he adds.

But according to Peter Bromirski and Peter Gerstoft, researchers at Scripps Institution of Oceanography in California, microseisms work better than earthquakes, which occur sporadically and are clustered on plate boundaries. Microseisms, by contrast, are ever-present and seem to come from all directions.

While all storm systems generate microseisms of various types, some are more useful to those studying the Earth’s interior than others

And while all storm systems generate microseisms of various types, some are more useful to those studying the Earth’s interior than others.

“Bomb cyclones generally have smaller spatial extent than typical extratropical cyclones, so the source area of signals they generate can potentially be better constrained,” says Gerstoft. Imagine a garden hose being shaken up and down with force. S waves cause material to ripple in a similarly explosive, but confined manner. P waves compress and stretch the land, like when a slinky when it is stretched out on the floor and one end is pushed rapidly forward.

The Japanese researchers detected two types of S waves were produced by the bomb cyclone they studied – SV waves that have an eliptical motion and can turn into P waves, and SH waves that move material horizontally.

Each wave type illuminates a different part of Earth’s interior due to individual travel speeds and characteristics, says Goldfinger. “It's like having a toolbox of many different flashlights, each one of which can illuminate a different part of the interior,” he says. “The new findings add one more flashlight, lighting up a previous dark patch, and maybe illuminating something new about what's there.”

But what gives a bomb cyclone the power to produce these faint S waves on the bottom of the ocean?

The main cause is the explosive way in which they develop, says Legro.

“The typical meteorological definition of explosive cyclogenesis is the central pressure dropping 24 millibars in 24 hours,” he says. “It is that rapid change in pressure that can cause strong winds at the surface, as air rushes in towards the center to fill the void.”

On average, this happens about 40 times a year between September and April in the Northern Hemisphere. These storms most often develop in the Northwest Atlantic and the Northwest Pacific. Locally, the Northeast United States can expect a handful of these weather bombs every winter. Some may pass relatively harmlessly out to sea, while others, like the one Maine experienced earlier this month, can track through the Northeast. 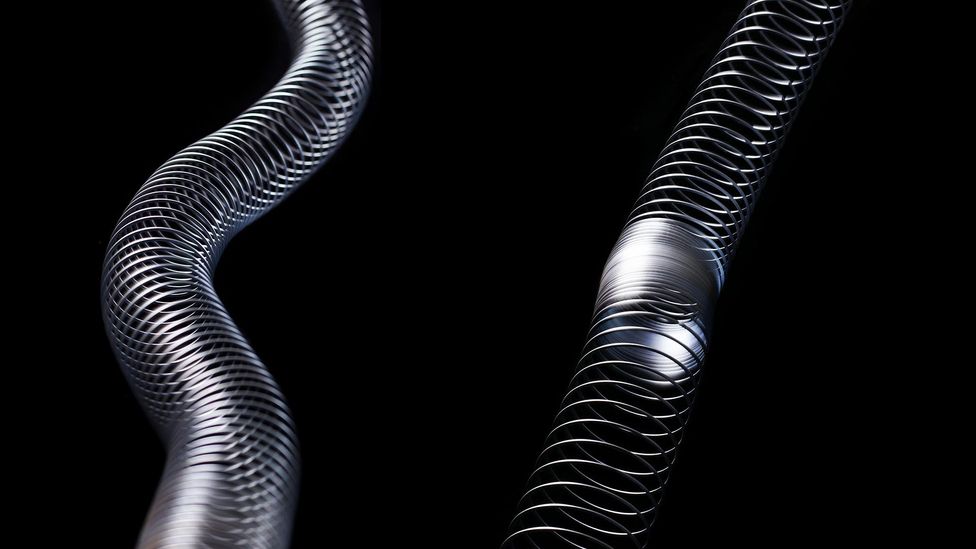 A slinky can be used to demonstrate two different types of seismic wave – the S wave on the left and the P wave on the right (Credit: Science Photo Library/Alamy)

While it might not have been the first thing on the minds of residents in Maine clearing felled trees and picking up the debris after November’s bomb cyclone, for seismologists it was a valuable opportunity.

Unfortunately for the Japanese scientists, their monitors sit in a “shadow zone” for any seismic waves passing through the Earth’s interior from Maine. The planet’s liquid core deflects and absorbs the seismic energy, meaning seismographs being used by Nishida and his team in Japan did not pick up the tremors generated by the storm.

“The bomb cyclone was devastating, but the seismic excitation was not extraordinary,” says Nishida. He hopes it might be possible to find signals that may have been picked up in other parts of the world, but they have still to get their hands on this data.

So, much like the residents of Maine, the geologists have also been left in the dark, if only temporarily.