Cranfield is a university with a difference – it has its own airport and its own fleet of planes. Mark Piesing finds out why.

“Ignition!” shouts Nick Lawson from the cockpit as the twin engines of the small turboprop airliner we are in roar into life.

Within minutes of taking off from the runway, the elderly aircraft has reached 45,000ft (13km). Lawson and fellow pilot Joe Brown throw the plane into a 50-degree turn. As I’m pushed down and back into my seat by the g-forces, I don’t know whether to cry or be sick.

This is no ordinary flight. Around me sit several students, clutching sick bags and notepads at the ready. Lawson – known as the “the flying professor” – is unique amongst British academics. He not only carries out university research that could shape the future of aviation, he is also a qualified commercial airliner pilot.

When the plane levels off, his students put down their sick bags and pick up their pens, scribbling down data from the digital displays in front of them.

“What do you think of that?” asks Lawson over the headset. When he isn’t flying commercial aircraft, Lawson is the professor aerodynamics and airborne measurement at Cranfield University and head of the National Flying Laboratory Centre.

Cranfield University, which is 40 miles (64km) or so north of London, is as unique as Lawson himself – it is the only university in Europe that has its own airport and air fleet.

Four huge wartime hangars dominate its campus, a reminder that the university was built on the site of RAF Cranfield, a former World War Two night-fighter base. Lawson’s office is right next to the runway, suspended high up inside one of the old hangars, which also house the university’s five wind tunnels. 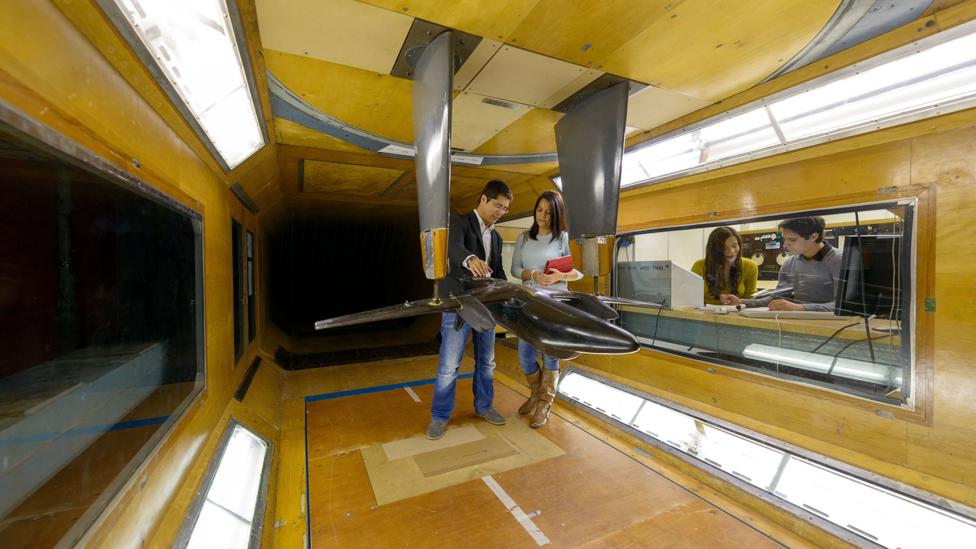 Next year, there may well be a fifth hangar at Cranfield – part of a £65m ($86m) investment to build the Digital Aviation Research and Technology Centre (Dartec). Funded by major companies like Boeing, Saab and Thales, Dartec is intended to spearhead the UK’s research on technologies like unmanned aircraft, digital air traffic control and the integration of drones into civilian airspace.

As part of the project, the old WWII airport will be resurfaced and equipped with new approach systems, a digital control tower and advanced radar systems.

First founded in the 1970s The National Flying Laboratory carries more than 1,200 aeronautical students from at least 25 universities around the world into the air. The aim is to help train them to design the aircraft of the future. Most of the UK’s aerospace engineers have flown with the NFL.

The Lab also carries out research for some of the world’s biggest aerospace companies, including Rolls-Royce, BAE Systems and Airbus UK, as well as smaller specialist firms.

Back on the ground, over a cup of tea and the whistle of turboprops outside, Lawson explains how he ended up in this unique job.

“I always wanted to fly,” he says. “My office is right on the tarmac and every day I could see these guys getting into their planes and going flying – and in the end, I couldn’t resist.

“Then two years later I was getting disheartened by being an academic because I was spending less and less time on research and more and more time on paperwork. I decided to drop out and become a commercial pilot.”

Later, he was able to combine his research and his flying for the National Flying Laboratory in one academic role.

In Lawson’s office, black-and-white photographs on the walls show how the laboratory has evolved. They show the airfield apron crowded with aircraft. In one, two Jetstreams, three Bulldog light trainers and the Cranfield A1 are lined up in front of the hangar. The Cranfield A1 was designed and built at Cranfield by students on the Air Vehicle Design course which is still running, but today the designs are all done virtually on computers.

The design of the Airlander 10 ‘flying bum’ hybrid airship was first tested in the wind tunnels of the university as well as the ‘see and avoid’ technology vital for the unmanned aircraft of the future.

The airfield’s location just north of London also makes it perfect as a drop-off point for sports celebrities keen to escape the prying eyes of the paparazzi – the identity of whom are a closely guarded secret.

Today, the NFL has a more modest fleet, the mainstay of which is a single Jetstream and two elderly Bulldogs. The Bulldog is a single-engine trainer famous for its large bubble-like cockpit that can seat two people side by side. 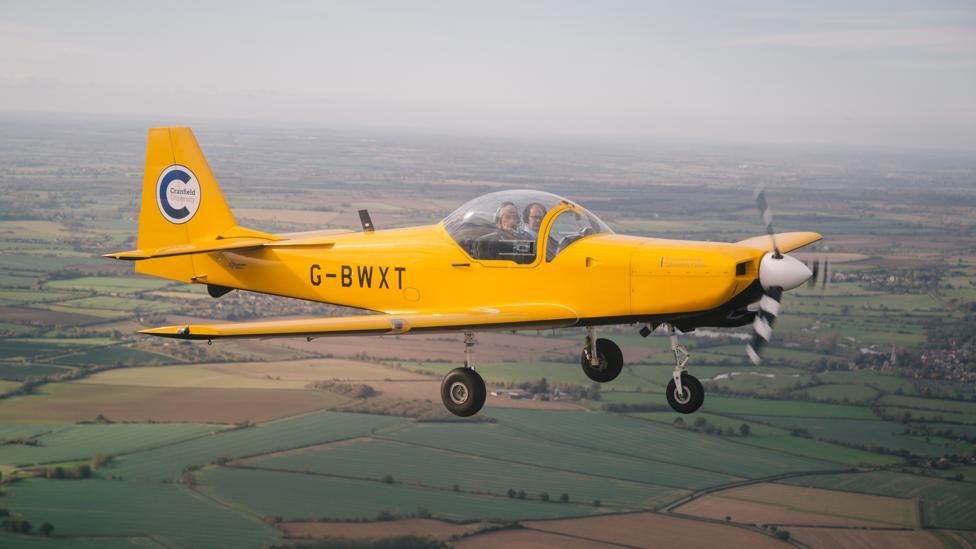 The university has its own fleet of aircraft, like this Firefly trainer (Credit: Cranfield University)

In front of one of the hangars, one of the Bulldogs bristles with sensors that look a bit like they have been gaffer-taped on to the aluminium wings.

“We anticipate once the sensor is fully working, we should be able to detect local levels of methane pollution from industrial areas and refuse tips just by a low overflight,” says Lawson.

Lawson’s previous research has included the aerodynamics of flapping wings, but today he is focused on how the use of cutting-edge fibre-optic sensors could be used to create wings and helicopter blades that can adapt and change shape during flight.

“The use of composite materials would allow sensors to be embedded directly into wings and blades as they are manufactured,” he says. “You could then collect as much data as possible and fine-tune the design, even if they are already in the air.”

This is not theoretical science. Lawson is working with Airbus to do precisely this on a project called Project Windy – short for Wind Design Methodology.

“We are taking advanced fibre-optic sensors and putting them on wind tunnel models to measure data more accurately,” he says. “Fibre-optic systems have the potential to outperform previous ways of collecting data like pressure or strain.

“The next step is to take the technology out of the wind tunnel and put it on aircraft to do flight tests.”

He is also working on a similar project with Rolls-Royce to use advanced sensors in their future engines.

But one of the biggest challenges Lawson faces these days – like many other academics – is finding money and time.

“The Flying Lab needs to pay for itself and that means flying the Jetstream,” he says. “Now we only have two pilots. It is harder to get time off to do research.”

Now, most of the NFL’s income comes from universities paying them to take their students into the air. In the future, the plan is to increase the amount of income from using the aircraft as airborne test platforms.

Potentially Dartec will change the research Lawson and his team can do, and the planes they fly. The plan is to replace the Jetstream and Bulldogs with a larger turboprop airliners like the ATR-42 or a King Air 350 regional airliners and Grob turbine trainers, the planes currently used to train British military pilots. 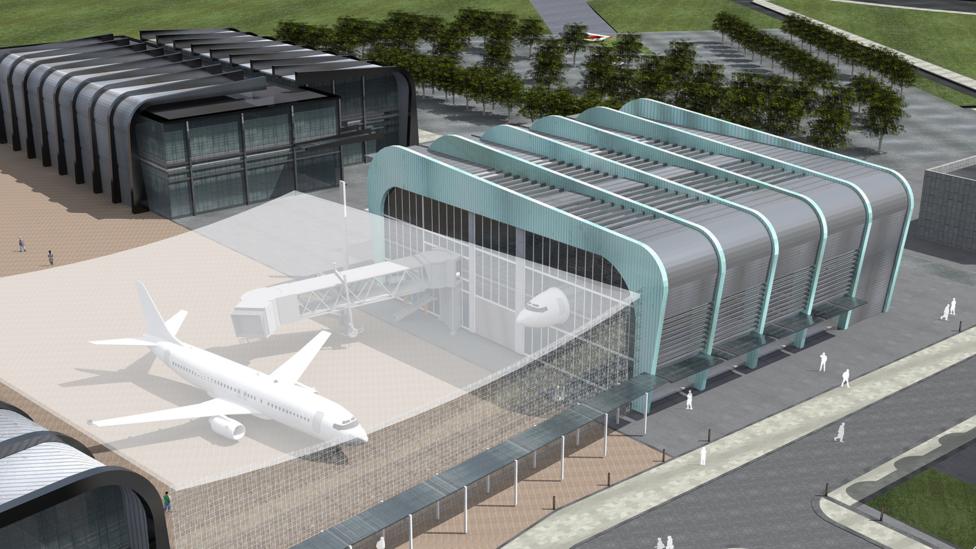 In 2018, Cranfield may get a fifth hangar as part of an £86m upgrade (Credit: Cranfield University)

Lawson says the unique opportunities offered by a university with its own airfield also makes the site extremely attractive to those wanting to test new technologies.

“Air traffic systems are very conservative, and rightly so,” Lawson says. “They don’t embrace new technology very quickly, partly because there aren’t many places where they can do research.

“Now we have big names bringing their technology to our university to fly and test systems to show how they work in a real airport environment. I don’t think there is anywhere else in the UK that can do this.”

It’s not only planes they will be testing, but also drones.

Back on the tarmac, Lawson points out to a black tailfin peeking out from behind a wall.

The aircraft it is attached to made history in July 2008 when it flew 800 miles (1,290 km) on a series of flights without any human intervention as part of a project known as Astraea.

The National Flying Laboratory managed the aircraft and jointly managed the flight trials with BAE Systems, which continue to this day as part of BAE’s programme to develop an unmanned combat aircraft for the UK military.

“We are going to use our aircraft to test the potential for the 4G network to guide UAVs,” says Christopher Bennett, a post-doc research fellow, Flight Testing. He will be placing a sensor onto one of the aircraft to see if it is possible to get suitable download speeds while flying that a drone would need to navigate with.

Despite all the cutting-edge technology, the main attraction for many of those working at the National Flying Laboratory is much more basic – the sheer joy of flying.

“It’s all about airmanship,” explains Joe Brown, management pilot and Jetstream captain, who gave up his career as a commercial pilot to fly aircraft at the NFL. “When you pilot a commercial airliner, you have to fly on a predetermined route. Here you can decide where you fly. You can bank up to 50 degrees on our flights.

“If you did that on a commercial flight you would lose your job.”