While killing insects would seem to be the best way of controlling the diseases they spread, some scientists are releasing more of the biting bug, re-engineered to stall epidemics.

On a late October morning in a hilly, middle-class neighbourhood in central Singapore, a crowd was forming for a surprising event. Top government officials, community leaders and a throng of media with cameras gathered around a group of scientists who had brought a most unusual gift: boxes of mosquitoes.

With a shout of “one, two, three”, they opened the boxes and released 3,000 of the insects into the air above Singapore’s Braddell Heights. In a country where the warm, tropical climate is ideal for mosquitoes, most people are used to swatting the insects rather than releasing more of them into the environment.

Fortunately, the residents of Braddell Heights had been prepared months in advance for this event, and welcomed the release. They knew that the mosquitoes would not bite – and that they were participating in an important study on the impact of mosquitoes infected with Wolbachia, a bacterium that hinders the insects’ fertility and blocks the ability of viruses like Zika to spread.

Singapore isn’t the only country throwing mosquitoes into the air. Across Asia and Latin America, scientists are trying out radical new methods to defeat Aedes aegypti, and the less widespread Aedes albopictus – the mosquito species that spreads the dengue, chikungunya, and Zika viruses. 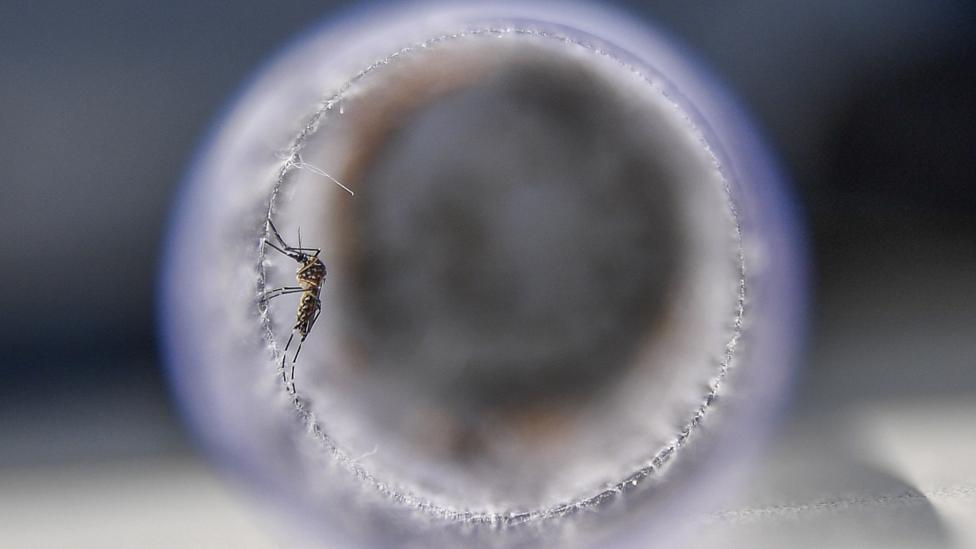 Local populations are consulted before mosquitoes are released in their communities (Credit: Getty Images)

Many of these experiments involve altering mosquitoes in the lab to render them harmless or infertile – with Wolbachia, irradiation, or even genetic modification. But the project in Singapore, along with an even larger trial in Yogyakarta, Indonesia, are showing that the release of these altered insects near human habitation is as much about persuading people about the effectiveness of this approach as it is about scientific innovation.

This new approach to controlling insects that spread disease – known as biological vectors – began several years ago, when alarm bells first rang over the rise of dengue, today considered the world’s fastest spreading tropical disease. Incidents of dengue have increased 30-fold in the past five decades, according to the World Health Organization. It has expanded from causing severe epidemics in just nine countries before 1970 to more than 100 countries today, many of them in Asia and Latin America.

The recent emergence of Zika, with its frightening links to brain damage in babies, has given experiments in vector control added urgency

The recent emergence of Zika, with its frightening links to brain damage in babies, has given experiments in vector control added urgency. There is no treatment yet for either dengue or Zika.

Despite this, there is some reticence among members of the public about projects to tackle the Aedes mosquito. Some of this has its roots in previous attempts to control this deadly insect. In the mid-20th Century, the prevalence of mosquito-borne diseases like malaria and yellow fever led to large-scale sanitation programs and the widespread use of a powerful new insecticide: Dichlorodiphenyltrichloroethane (DDT).

After widespread use, DDT was eventually banned in 2004 due to concerns over its impact on human health and the environment. It has been linked to cancer in humans and a decline in predatory birds.

Despite this, the use of DDT did reduce numbers of mosquitos. This success led to complacency after the 1970s, says Duane Gubler, emeritus professor of infectious diseases at the Duke-NUS Medical School in Singapore. Brazil, for instance, was declared Aedes-free in 1958 but as measures were relaxed, the insect began to reappear in the 1970s. One genetic study, published in July this year, suggests that mosquitoes from non-eradicated areas in Venezuela recolonised northern Brazil, later expanding their distribution southwards. 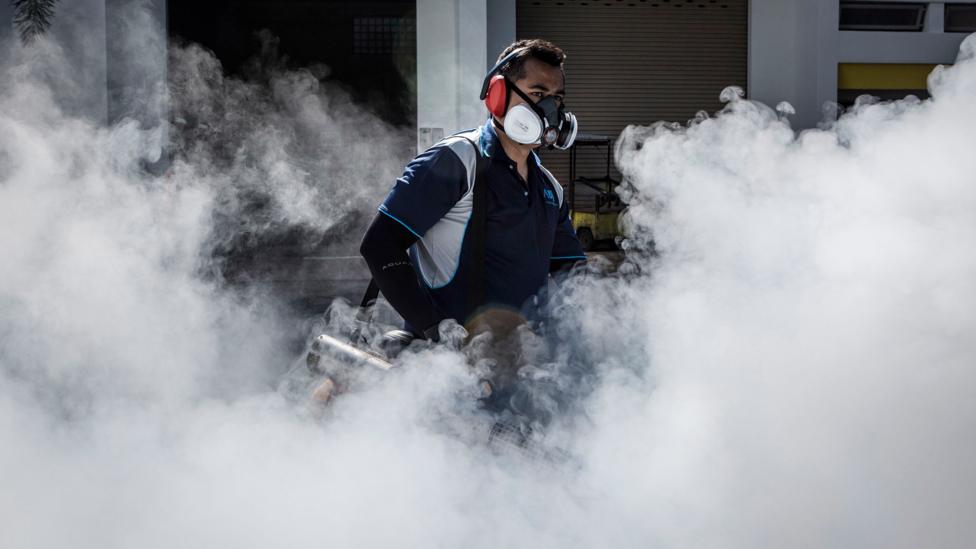 Control measures have failed to keep up with mosquitoes that are sometimes resistant to insecticides (Credit: Getty Images)

At the same time, Gubler notes, two global trends were nurturing a mosquito comeback. Explosive, chaotic urbanisation created the perfect environment for the city-loving Aedes, as well as providing the perfect conditions for spreading viruses quickly. The growth in global transport and travel also aided their spread to new areas. Treated bed nets, often used to help prevent malaria, are also relatively useless against Aedes, which tends to be active during the day. Growing insecticide resistance added to the problem.

We desperately need a range of new tools - Duane Gubler

“We desperately need a range of new tools,” says Gubler, the world’s leading expert on dengue. “Fortunately, many of the ones in the pipeline seem very promising.”

The need is evident even in Singapore, a highly-developed city-state that has had one of the world’s best mosquito control programmes, which has been in operation for over 40 years, yet has recently seen a resurgence in dengue. Singapore looked at an array of new tools, including genetically modified mosquitoes, before settling on trials with Wolbachia.

Described by one scientist as “the biggest thing since DDT”, the use of Wolbachia-infected mosquitoes has become the most widespread of the new vector control experiments, with lab studies or field trials now underway in a dozen countries. The enthusiasm is understandable: Wolbachia seems like the perfect weapon against mosquito-borne disease.

It is found in more than half of all insects, but not usually in viral-pathogen-carrying mosquitoes. The microbe not only protects its host from diseases like dengue and Zika, but is also naturally built to spread rapidly through its host population. Plus, it does not transmit to humans or animals. 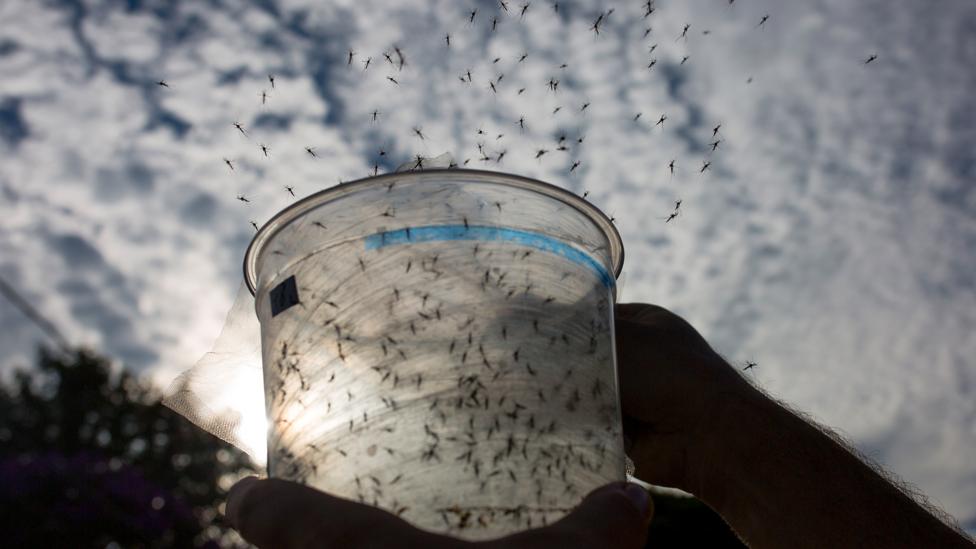 The Wolbachia bacterium does not transmit to animals or humans (Credit: Getty Images)

One approach to rolling out this Zika and dengue resistant bacterium, pioneered in 2011 by scientists at Monash University in Australia and propagated through the World Mosquito Program (formerly known as Eliminate Dengue), is to release both male and female Wolbachia-infected mosquitoes into the environment. Wolbachia is only passed from females to their offspring so releasing females with this bacterium means that it will be spread throughout the mosquito population, making them resistant to Zika and dengue.

Singapore, like China, is trying a second approach, aimed at suppressing the population of mosquitoes by releasing only male mosquitoes. Males infected with Wolbachia are unable to fertilise the eggs of non-infected females.

The method chosen is partly to do with cost. The second approach is more expensive because it involves sorting males from females in the lab and, unlike the first approach, requires sustained release of mosquitoes – at least until the population crashes, and perhaps even afterwards. Last year, following successful trials, China set up facilities in Guangzhou to produce five million Wolbachia-infected mosquitoes a week.

Public acceptance also plays a critical role in the choice of technology used, as scientists have learnt from past controversies, not only with DDT, but also unsuccessful trials of sterilised mosquitoes in India in the 1970s, which led to public panic over the chemicals being used. 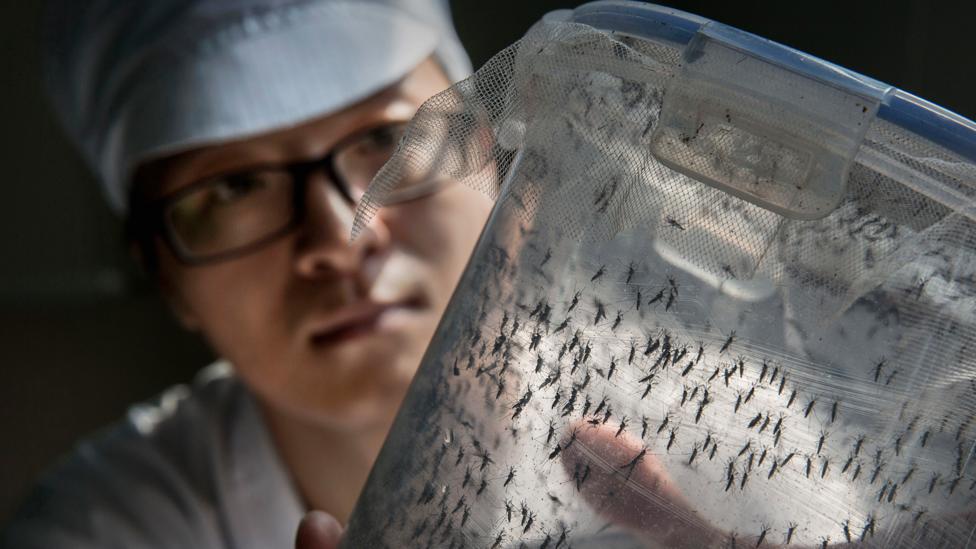 The new approach was trialled after a massive spike in the number of dengue fever cases (Credit: Getty Images)

Lee Ching Ng, the director of the Environmental Health Institute at Singapore’s National Environment Agency and head of its Wolbachia project, says they chose the suppression approach in part because male mosquitoes don’t bite, making it more acceptable to Singaporeans. It’s also in keeping with the country’s tough house-to-house checks on mosquito breeding that keeps bug numbers low.

Using Wolbachia to suppress mosquito breeding should also be seen as less risky than previous attempts because the bacteria already exists in the environment, suggests Ng. It has been found to be safe for humans and animals, although long-term ecological effects are not known. Trials of genetically modified mosquitoes were rejected by a community in southern United States last year, while Wolbachia trials proceeded with little fuss. In November, Wolbachia-infected mosquitoes were cleared for release by the US Environment Protection Authority in 20 states.

Nowhere is the importance of community more evident than in the low-rise city of Yogyakarta in Java, Indonesia, where Asia’s largest Wolbachia trial is underway. Adi Utarini, the project head and professor of public health at Gadjah Mada University, says their trial is not only about technological innovation but also community engagement. 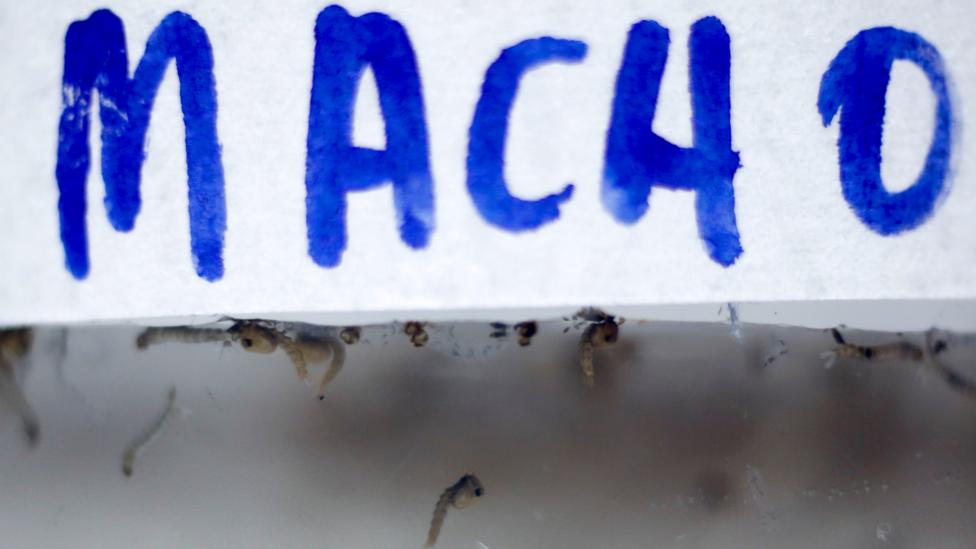 Utarini and her team began in 2011 by importing infected eggs from Australia’s Monash University. For the next two years, they worked in the lab, testing and breeding Wolbachia mosquitoes. At the same time, their communications head Bekti Andari began visiting communities in the district of Sleman, where the first release would take place.

The first challenge they faced, says Utarini, was having to tell people “the opposite of what they are used to believing: that you have to get rid of mosquitoes”. They had to educate people about the basics of disease transmission, to make them understand that “the enemy is not the mosquito, the enemy is the virus”.

The Sleman experience shaped the rest of the project. After releasing adult mosquitoes in Sleman – including biting females – the team switched to containers of Wolbachia-infected eggs. Eggs were an easier sell to the public. They were less obtrusive as the insects hatched and flew out at different times. It also meant releases could be made more frequently.

As the trial slowly expanded through Yogyakarta, the team used all the tools at their disposal: community meetings, neighbourhood newsletters, mass media, phone calls and emails, visits to the lab. 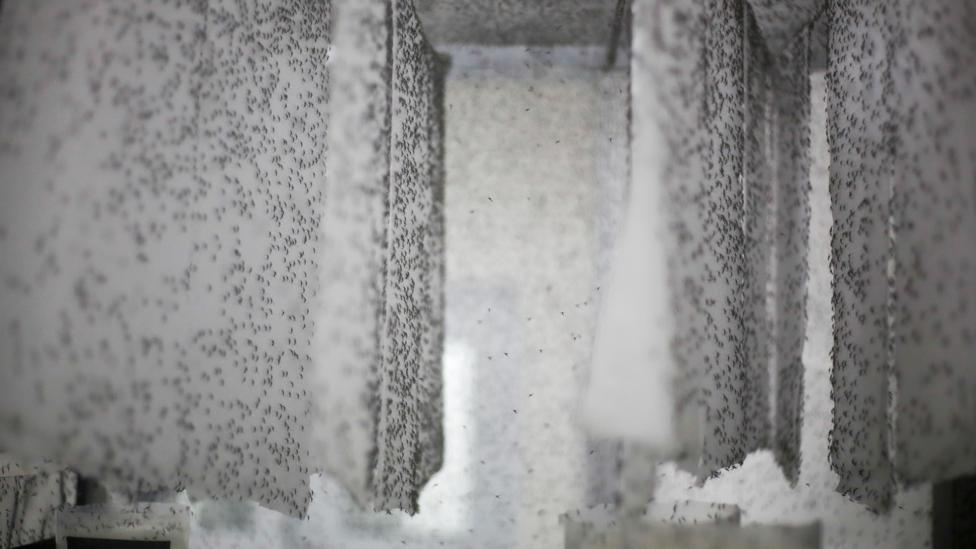 Male mosquitoes are an easier sell to communities because they don't bite (Credit: Getty Images)

“We hid nothing from people,” says Utarini. “Challenges had to be continually met.” In one neighbourhood, the team had to briefly stop work during the dengue season because of panic over an outbreak of cases that affected 14 patients and led to one death. The team returned after people were calmer.

Between 2015 and 2017, half of the Yogyakarta’s 24 districts were inundated with Wolbachia mosquitoes. The other half served as the control, made possible by the fact that mosquitoes don’t fly too far.

By mid-2017, scientists had placed thousands of containers of eggs in backyards – one every 50 metres (164ft). Every two weeks they were refreshed with up to 120 new eggs. The scientists are now waiting for Wolbachia to expand to 80% of the mosquito population to see whether the releases are having the impact on the prevalence of dengue they predicted.

A good result, says Utarini, would be if the number of cases in Wolbachia areas is 50% less than control areas.

“That’s when we can say this works,” she says.

Meanwhile, in Singapore, the early results have been promising. Ng and her team found Wolbachia mosquitoes survive as well as wild mosquitoes in the urban environment, flying to upper floors, and successfully mating with the non-Wolbachia females. The viability of eggs collected from the study sites had fallen by half. Now, says Ng, they are looking at scaling up mosquito production and strategies of release.

Neither Ng nor Utarini believe Wolbachia is a silver bullet for Zika or dengue. But a mix of interventions could do the trick.

“If we can use new vaccines [for dengue and Zika] to increase herd immunity, and at the same time, new tools like Wolbachia and insecticides to reduce the mosquito population, we should be able to control these diseases,” says Gubler.