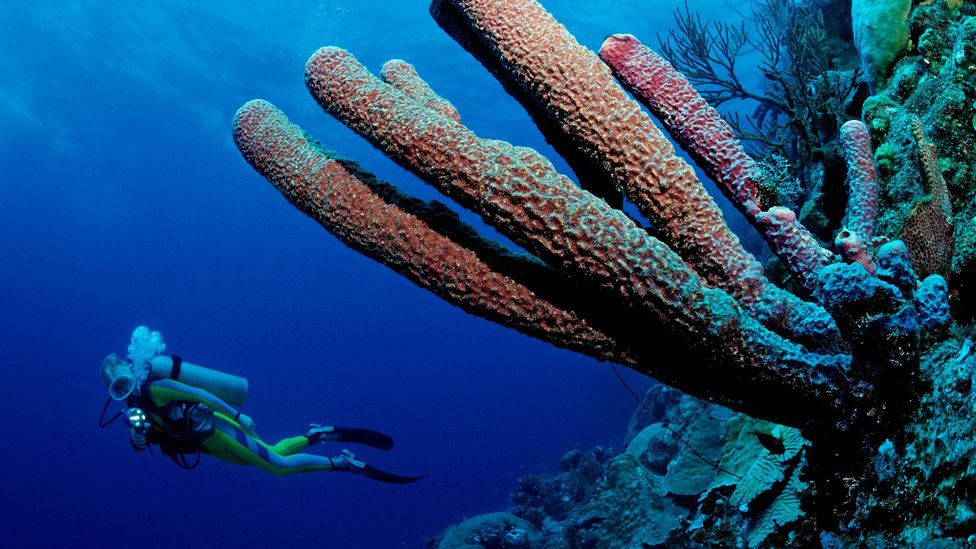 By Colin Barras 6th February 2018
Geologists are scouring the planet for a specific location to place a 'golden spike' - to define the beginning of the Anthropocene, a new geological era. Where are the candidates?
T

The view from the top of this stairway in southern China is extraordinary. Climb it and you can see the moment the world nearly ended.

Our planet has a turbulent history. An especially tumultuous event occurred 252 million years ago. The Earth erupted in volcanic activity that came perilously close to destroying all complex life.

Geologists have dubbed this the “mother of all extinctions”, an event they recognise as marking the end of one great chapter of Earth’s history called the Permian and the start of the next chapter – the Triassic.

But it’s not enough simply to give the event a name. The scientists wanted to know where in the world is the best place to actually see the rocks that formed across the calamitous boundary between the Permian and Triassic periods.

A cliff near Meishan in China’s Zhejiang Province offers the best window. It has been awarded a top geological honour. It is the “golden spike” for the Permian-Triassic boundary – making it one of  65 such spikes around the world marking important geological boundaries. To make viewing the rocks even easier, the authorities installed a stairway.

Some geologists say our planet crossed another geological boundary about 70 years ago, entering a new chapter of Earth’s history they have dubbed the Anthropocene. The question some of them are now asking is: where in the world offers the best view of the moment our modern world began? Where should the golden spike for the dawn of the Anthropocene be placed? 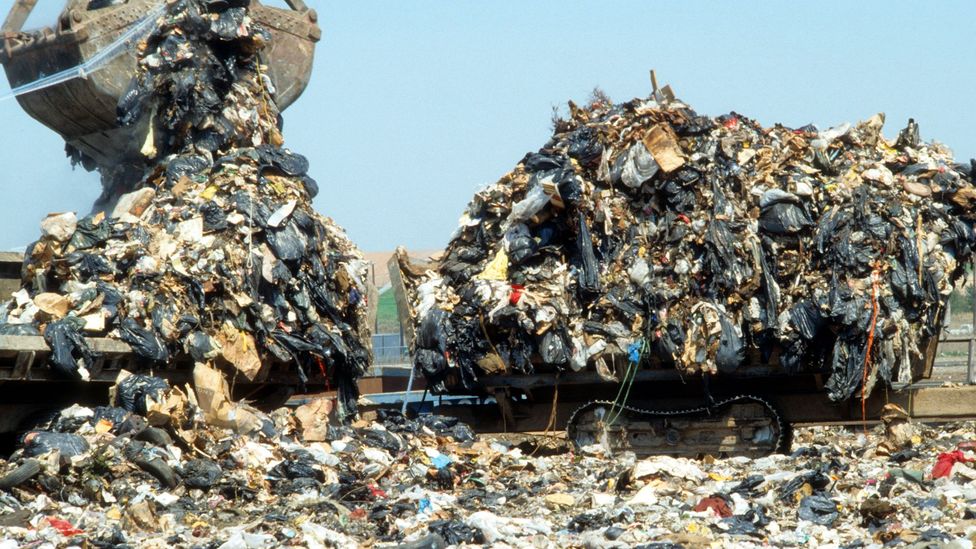 At its peak Fresh Kills landfill on Staten Island, New York, was receiving about 26,000 tonnes of junk every day (Credit: Alamy)

Colin Waters at the British Geological Survey near Nottingham leads the team that is considering the options. He says defining a golden spike for the dawn of the Anthropocene poses unique challenges that geologists have never faced before.

Many golden spikes are placed in cliffs, like the one near Meishan. That’s not really an option for the dawn of the Anthropocene: rocky cliffs take tens of thousands of years to form, but Waters and his colleagues argue that the Anthropocene began just a few decades ago – in or around the year 1950.

But even if cliffs are out, there is no shortage of other options.

The dawn of the Anthropocene will probably be marked by a chemical or biological signal. There is no official word on what the signal might be yet: perhaps scientists will choose the surge in atmospheric radioactivity from atomic bomb tests, an uptick in the concentration of microplastics in the environment, or something else entirely.

To award a golden spike, the team simply needs to find a geographic setting in which that signal is recorded in some sort of material that was accumulating when the Anthropocene began.

In principle, the material could even be our rubbish – which is why one place the researchers have singled out as a golden spike candidate is the Fresh Kills landfill on Staten Island, New York.

This landfill opened in 1948, and at its peak was receiving about 26,000 tonnes of junk every day. According to some accounts it’s the largest human-engineered deposit of its kind anywhere in the world. It certainly looks like a good candidate for the Anthropocene golden spike. 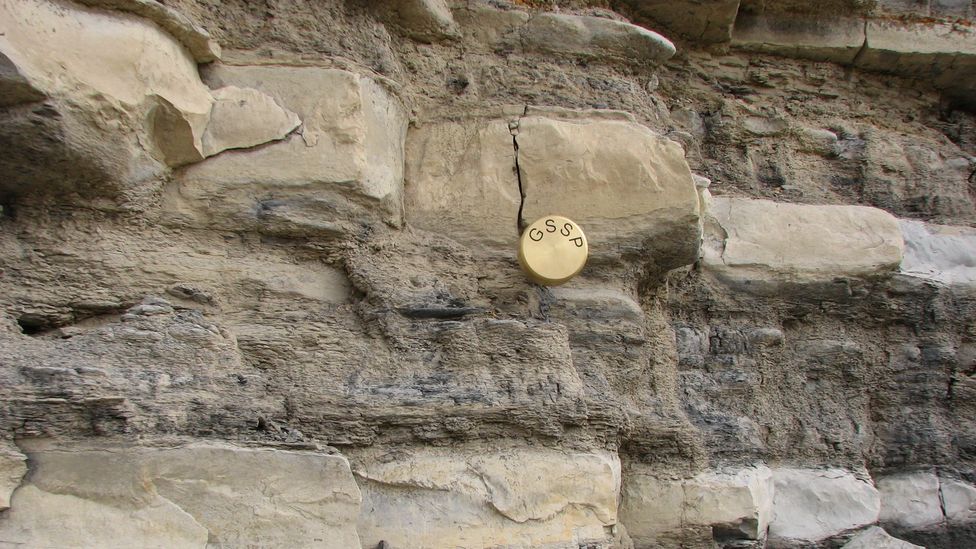 This golden spike marks the Cenomanian-Turonia boundary in Colorado, US (Credit: Brad Sageman)

But landfill sites come with serious problems, says Waters. The material they contain is constantly churned up by machinery, so there isn’t a neat layer corresponding to each year. The boundary would be smeared and blurred – it’s not a nice crisp image. This is actually a problem with most places where human refuse accumulates, says Waters.

It would be apt to put the Anthropocene golden spike at a site created entirely by human activity, but it’s proving difficult to find a suitable location. That’s why the scientists are now looking elsewhere.

The silt accumulating in estuaries might be worth considering, they say. For instance, the gloop at the bottom of the Clyde Estuary in Scotland documents the chemical pollution from industrial processes. The mud here probably hasn’t been disturbed - unlike the trash in a landfill site - so it should be possible to identify the thin layer of mud that built up in any given year. This means that the Anthropocene boundary should show up as a sharp line rather than a smudge.

Silt and mud also builds up each year at the bottom of lakes and out on the ocean floor. The mud at the bottom of Crawford Lake in Ontario, Canada, contains a detailed annual record of industrial pollution. Waters thinks it might be another suitable site for the golden spike.

But these muddy sequences – particularly those on the ocean floor – are not exactly accessible. The only way to see the 70-year-old wafer-thin layer of mud that marks the beginning of the Anthropocene would be to extract a sediment core and study it on dry land.

This is easier said than done. Soft mud can be disturbed when it is extracted, which means the mud from the boundary itself might get mixed up with the mud above and below, smearing the chemical signal that marks the boundary. “The risk of introducing an error is great,” says Waters. 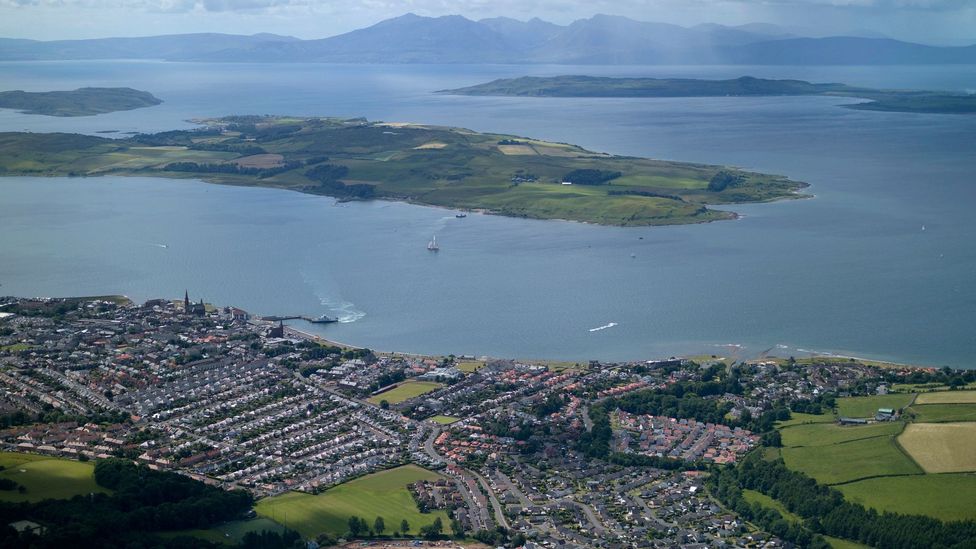 The gloop at the bottom of the Clyde Estuary in Scotland documents the chemical pollution from industrial processes (Credit: Alamy)

For these reasons it might be best to put the golden spike in a place where material builds up in a more permanent, solid state.

Deep beneath Paris, for instance, is a network of drains in which limestone-like deposits have built up, layer by thin layer, over the last 300 years. Traces of metals including lead and copper are locked in the layers. They document the growth in Paris’s urban environment. If those chemicals are chosen to define the Anthropocene boundary, the Parisian limestones would be an excellent location for the golden spike, says Waters.

Another option – perhaps Waters’s favourite right now – would be to put the golden spike in a chunk of coral pulled out of the Caribbean. Corals add a new layer of material every year, and the chemicals locked in those layers record evidence of all sorts of human activity, from atomic bomb tests to the human-induced rise in atmospheric carbon dioxide levels.

But all of these candidates carry one significant disadvantage, says Waters. The geological community has never before placed a golden spike in these sorts of localities. “We might have to have a discourse with the people who would be voting and find out what would be most acceptable to them,” says Waters.

Defining a golden spike is not a decision that geologists take lightly, says Mike Walker at the University of Wales Trinity Saint David. Candidate sites are first voted on by the scientists set up to explore the boundary in question. Once they have chosen their favourite potential golden spike location, the site must be evaluated by a scientific commission looking at a slightly broader span of geological time. 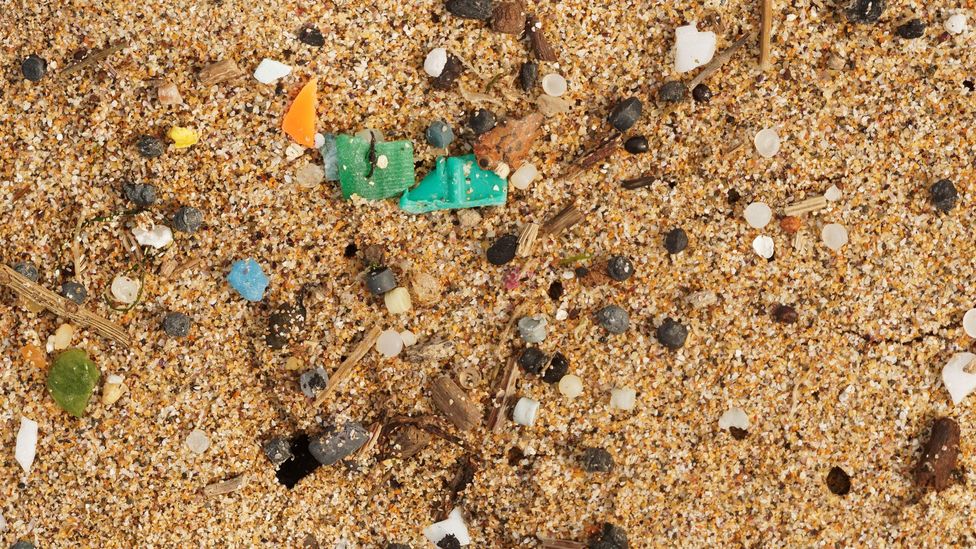 The dawn of the Anthropocene could be marked by the rise of microplastics in the environment (Credit: Alamy)

The proposed Anthropocene, for instance, would probably become an epoch in a chunk of geological time called the Quaternary, so the Subcommission on Quaternary Stratigraphy would have to vote on whether or not to accept the golden spike candidate.

If they vote in favour, the proposal then lands in the inbox of the International Commission of Stratigraphy, where yet another vote must be taken on the golden spike’s suitability. If it is accepted it moves on again – to the International Union of Geological Sciences for final scrutiny and, with luck, ratification. Only then is a golden spike official.

So it’s perhaps unsurprising that Waters and his colleagues are keen to choose a candidate golden spike that the various voting bodies won’t consider too outlandish. “We might want to go with something they are familiar with,” he says.

Waters takes some inspiration from Walker and his colleagues. In 2008 they succeeded in persuading the authorities to designate the golden spike for the Holocene – the epoch that comes before the proposed Anthropocene. Walker’s team argued that the golden spike should be placed inside a core extracted from the Greenland ice sheet and now stored in a facility in Copenhagen. No golden spike had ever been placed in ice before.

“There was one slightly scathing comment that I came across that referred to a ‘[golden spike] in a fridge’,” says Walker – but the decision was still ratified.

Perhaps that’s a sign that it would be wise to place the Anthropocene golden spike in ice too, says Waters. An ice core from East Antarctica that records changes in atmospheric chemistry linked to human activity would be an option.

Even if Waters and his colleagues can find a politically acceptable option for an Anthropocene golden spike, their chances of successfully designating it hang in the balance. This is because there is some opposition within the geological community for even recognising the existence of the Anthropocene. Walker is one of those opponents.

We have detailed 20th-Century records of all sorts of chemical and biological signals, which means scientists are spoiled for choice when it comes to selecting which one to use to define the Anthropocene. But it’s a double-edged sword. They might use a surge in radioactive plutonium near the year 1950 to mark the boundary – but many other chemical signals didn’t change very much between the 1940s and 1950s.

“Some things changed across that particular ‘boundary’ and some things didn’t,” says Phil Gibbard at the University of Cambridge. If so much stayed the same, is it right to mark a geological boundary there at all?

And there is one final point. When a golden spike is awarded it can become a badge of honour for the local community. This is certainly the case for the golden spike in Meishan in China’s Zhejiang Province. “What they have done there is stunning,” says Waters. “There are brass placards everywhere, there’s a museum, and even a 3D cinema that shows you a movie on the evolution of Earth.”

Would a country or town consider it a privilege to be honoured with the Anthropocene golden spike, wonders Waters. “It might be seen to suggest that your country is where anthropogenic change has had its biggest impact,” he says. “Perhaps we won’t get countries rushing forward to claim this one.”