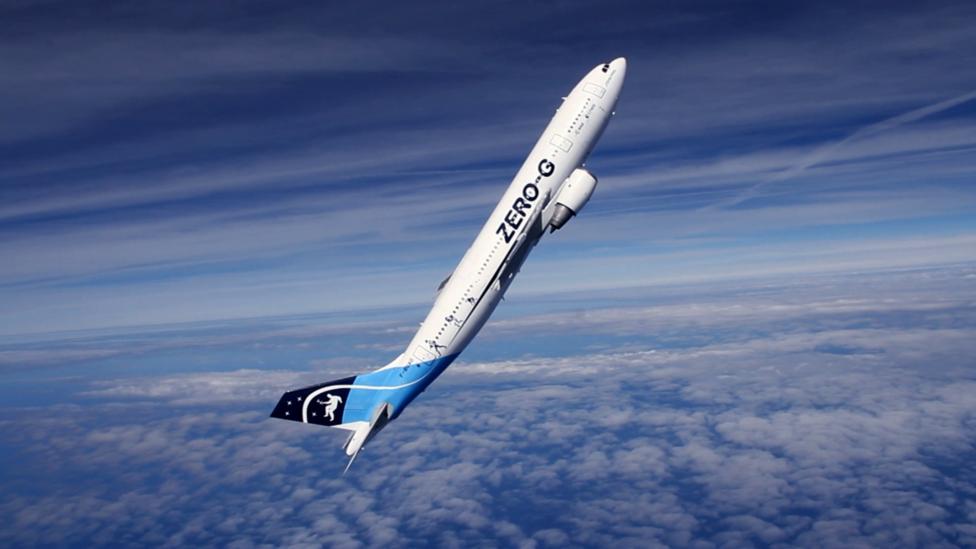 By Sue Nelson 6th February 2018
You don’t have to go to space to feel the weightlessness of orbit. Sue Nelson joins a special flight that puts its passengers into zero gravity – at least for a few seconds.

Not many aircraft captains give their passengers a rocket launch-style countdown before take-off, but this is no ordinary plane. For starters, everyone on board, apart from the crew, is a scientist and has passed a full medical check – including a heart assessment. This is not a trip for nervous fliers.

The captain’s instructions refer to a manoeuvre so challenging it requires three pilots to be in the cockpit. The aircraft pulls up from a level flight into an incline at increasingly steep angles of 30, then 40 degrees.

In the middle section, where the windows are blocked by a padded wall, everyone is either standing, sitting on the floor or lying down because the seats in this Airbus A310 have all been removed.

Several scientists are wearing caps covered in electrodes. Others, weirdly, have their arms inside open-ended boxes, and they appear to have three hands (more on this later). Many are staring intently at washing machine-sized metal contraptions with switches and screens. I am lying on an area of floor cordoned off by netting. 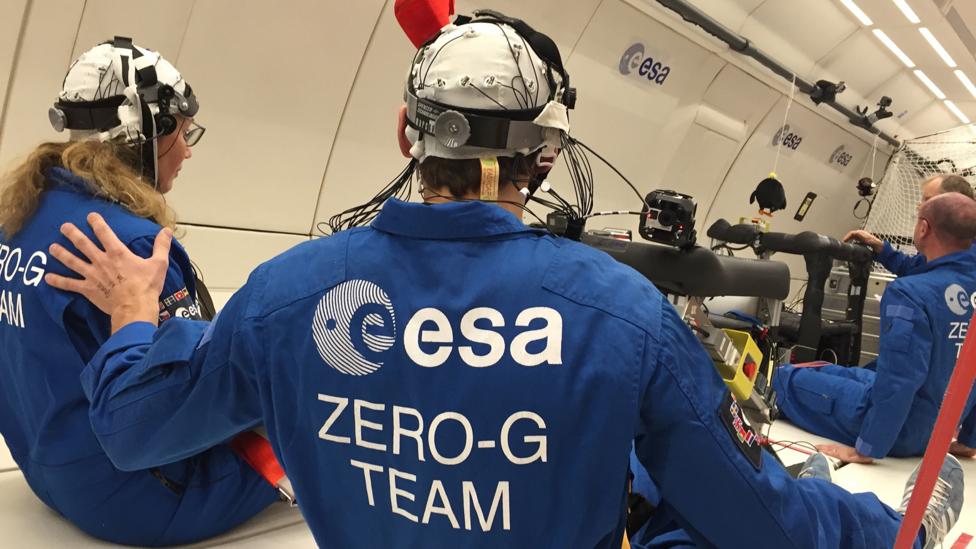 The scientists on board are taking part in a dozen different experiments (Credit: Sue Nelson)

Everyone is perfectly still because it feels as if a weight is pressing down, harder and harder, on every part of our bodies. Fortunately, in a few seconds, we will all experience something extraordinary.

At 50 degrees the magic begins. The plane is injected into a parabolic arc. The noise level suddenly drops and the tone of the engine shifts higher as the aircraft free falls up and over the top of the arc. My body’s heaviness, increased by gravitational forces of 1.8G on the way up so it felt almost twice its normal weight, disappears. I am being drawn inexplicably upwards. Weightless.

It is a wonderful, liberating sensation and for 20 brief seconds, while someone less fortunate at the back of the plane grapples with a sick bag, I am floating. And I absolutely love it.

Everyone onboard is experiencing microgravity, which is what astronauts encounter on the International Space Station (ISS). This zero G (zero gravity) aircraft, owned by Novespace, is the latest one used by the European Space Agency (Esa) to perform science experiments in microgravity and, to a lesser extent, astronaut training. Even in space, minute amounts of gravitational force remain because it is always present between two objects that have mass. So, technically microgravity is the more precise term for this experience, but zero G is catchier.

“We have 12 experiments on board,” explains Esa parabolic flight coordinator Neil Melville, as he walks me along the plane before our flight. “This one is testing gyroscopic actuators,” he says, pointing to a netted area containing tiny box-shaped satellites or cubesats. “They will use a satellite to track a ball in zero G.”

He wanders along to the next group of scientists surrounding a metal box. “This experiment is all done inside a combustion chamber looking at flame propagation in zero gravity.”

WATCH: Sue Nelson experiences weightlessness onboard the A310

Another experiment involves a heat pump device that will eventually fly on the ISS. Melville leads me to another group. “This is testing the weak equivalence principle. Nothing less than Einsteinian science.”

The people with three hands are performing something known as the rubber hand illusion. If an artist’s paintbrush is used to stroke a realistic but fake hand beside your own real hand, the brain mistakenly thinks that the fake one is part of your body. The experiment is being done in microgravity to see if it changes this perception and the associated sensations. 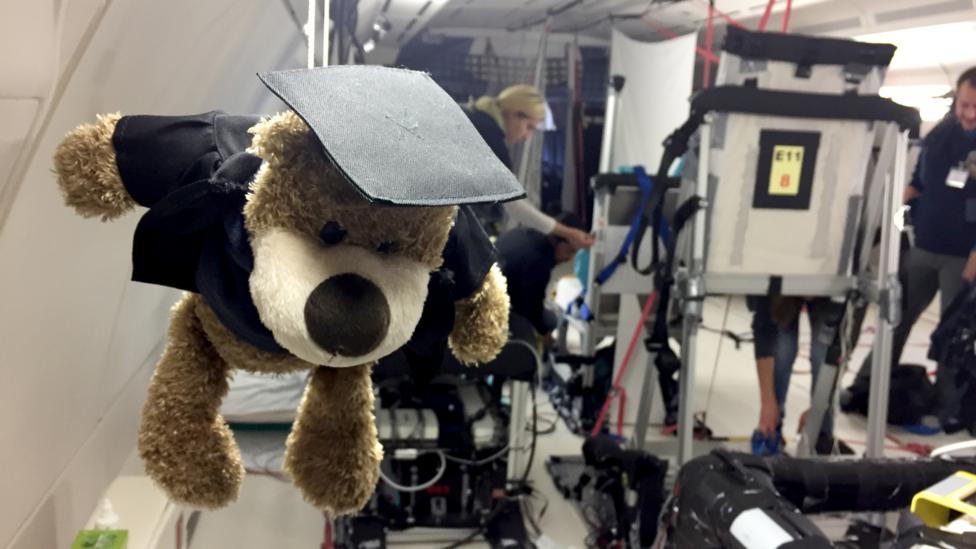 Some experiments have mascots attached - which float into the air as weightlessness takes hold (Credit: Sue Nelson)

“The whole of the parabolic arc takes one minute including the 20 seconds of weightlessness,” says Melville. “But the plane does 31 parabolas. One every three minutes so it adds up to just over 10 minutes of microgravity for the experiments.”

Not surprisingly, passengers are given motion sickness medication before the flight but several unfortunate scientists still succumb to the repeated stomach-lurching parabolas. Some adapt to the experience within a few arcs; others, as on my flight, were in a bad state from parabola one with several nauseous hours ahead until they could return to Earth. There are no toilets on board either “but the medication dries you out”, I am told.

“By far the biggest contribution to motion sickness is anxiety,” says Melville. “If you’re chilled out you’ll be fine.”

When zero G stops, you don’t want to fall onto an experiment and break it - Neil Melville, flight co-ordinator

Most people, find the somewhat bumpy transition from 2G to normal at the end of the flight the most uncomfortable part, and on average about two people are sick per flight.

The majority of scientists, however, can cope with these unusual work conditions. Cuddly toys as mascots are hung from string on or near their experiments ready to float during weightlessness. Floor straps for feet and legs help maintain control in an upright position during the ‘action’ and prevent anyone drifting upwards into a dangerous position. “When zero G stops,” Melville warns, “you don’t want to fall onto an experiment and break it.”

Six of the 12 experiments are part of Esa’s Flying Thesis programme. Student Timo Klein, from the German Sport University and the University of the Sunshine Coast in Australia, is part of an experiment examining the brain’s performance and linking it to blood flow velocity.

Klein is wearing a cap covered in electrodes to measure his brain’s activity while he and two others react to audio signals, use a keyboard, and solve a mathematical equation during the 20-second periods of microgravity. “It’s not a difficult equation but under the pressure of time it becomes a difficult cognitive performance task.” 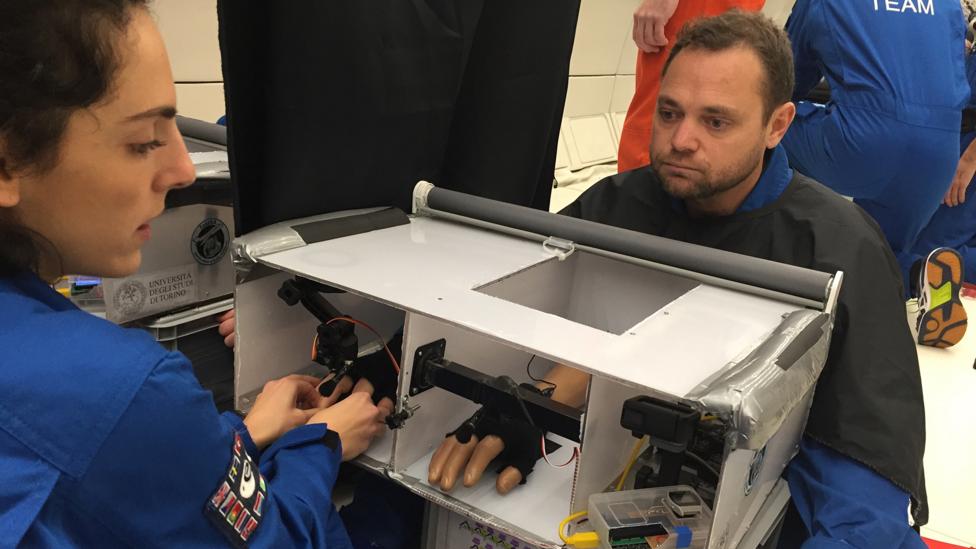 Scientists test if microgravity has any effect on the 'rubber hand illusion' (Credit: Esa)

Physical fitness is important for astronauts but so is brain fitness and there are potential effects to consider from being in microgravity and also in isolation for longer durations.

As well as gaining a greater understanding of an astronaut’s performance in space, this knowledge has potential applications for designing better ways to help those with Alzheimer’s disease or dementia.

For the final five parabolas the free-flight area, where I floated several times towards the ceiling, is off limits. The netting is removed because the German Mars Society is about to release a big shiny balloon. At least that is what it resembles when they test a deployment system for an inflatable space structure.

It is a wonder to watch. Once weightlessness kicks in on a parabolic arc, the tightly packed inflatable is shot out of a cylinder and a mass of concertina-style folded gold fabric fans unfurls into the air. 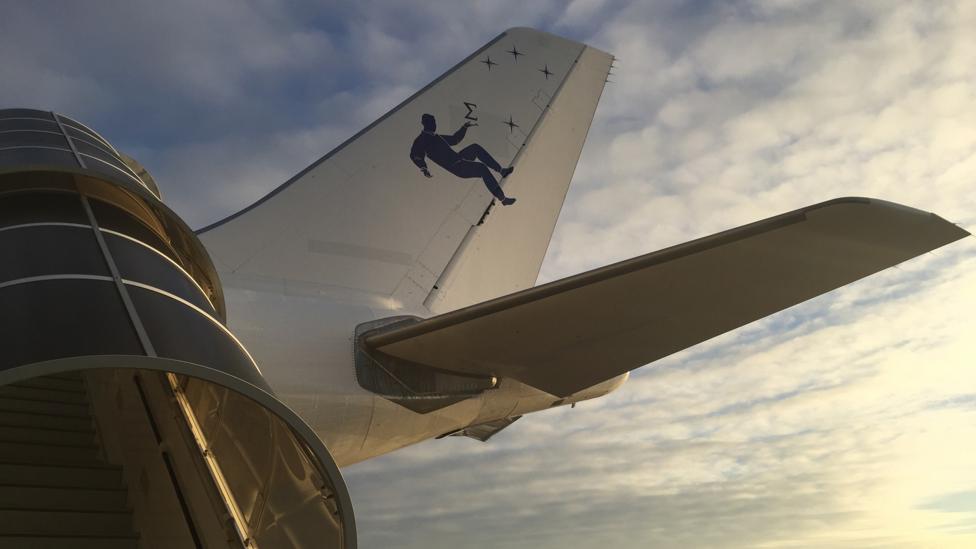 It works first time and the experiment provides invaluable information for a future mission. “No one knew what it would do in zero G,” says the society’s Tania Lehmann. “We expected it to steadily move outwards from the container and steadily unfold but instead it came out, stayed a bit and then suddenly started unfolding.”

The inflatable will undergo further testing on an atmospheric rocket in one or two years. One day, it will hopefully be released from a probe to make scientific measurements while falling to the Martian surface.

Every scientist on board the this zero G plane is aiming high. Perhaps that’s why art work on the outside of the plane shows a transformation from an ape through to a walking human being until, on the tail fin, it reaches the ultimate in evolution: a figure floating in space.