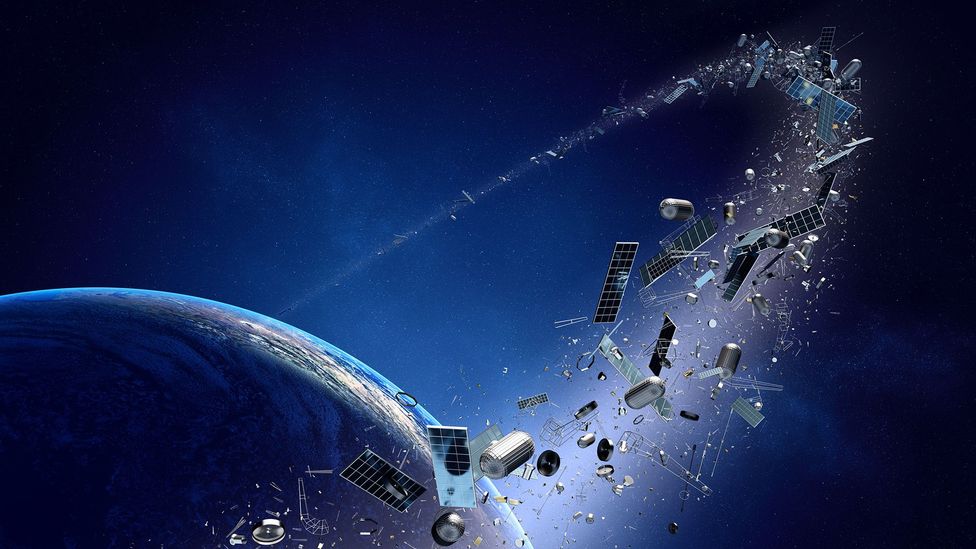 By Sue Nelson 2nd March 2018
Tomorrow’s generation of space scientists will have to deal with a monumental amount of space junk left from previous spacecraft. How are we going to clean it up?
I

It was either a cheerleader for space science, a marketing masterpiece or, as the mannequin astronaut enjoyed planetary selfies, another potentially dangerous temporary piece of space junk.

There are over half a million pieces of debris that are not much larger than a marble, littering the Earth’s orbit and over 20,000 the size of a cricket ball or larger. These bigger pieces range from an astronaut’s glove to dead spacecraft and disused rocket stages. Yet size does not always equate to the greatest danger.

As we enter a new space race, with more nations like China and India joining the quest to explore the cosmos, we will be adding more and more of this flotsam into orbit. The next generation of space scientists face a big challenge: how to ensure our future wave of spacecraft survive this ever-increasing belt of rubbish.

Watch: The teenage scientist tracking a sea of space junk

The search is on for ways to keep the world’s space agencies one step ahead of this potentially lethal debris. 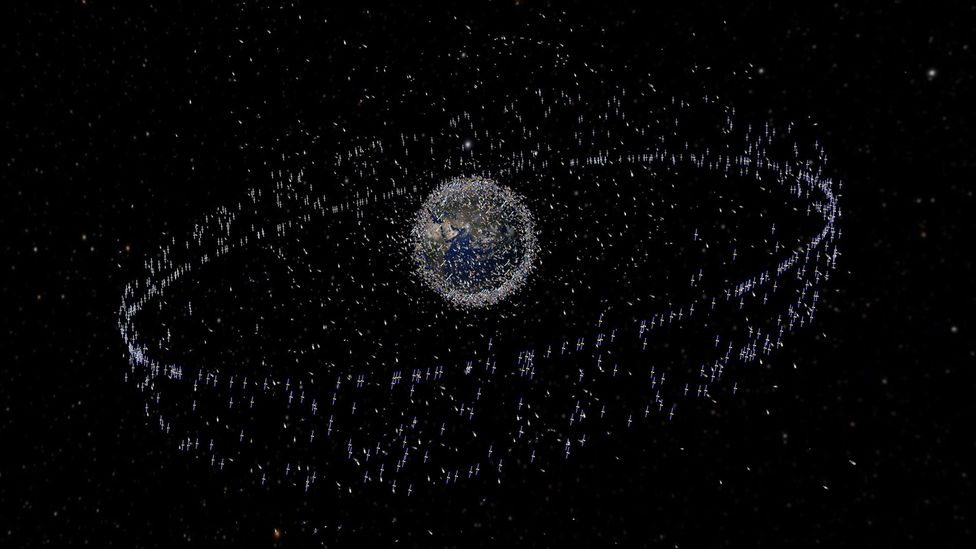 The debris ranges from pieces as small as a fleck of paint to disused satellites (Credit: Nasa)

In early February 2018 in Vienna, during the United Nations’ 55th Session of the Scientific and Technical Subcommittee Committee on the Peaceful Uses of Outer Space, Liou presented an update on the space debris environment and the US space agency’s operations and research. In 2017 alone, 86 launches around the world placed more than 400 spacecraft into orbit around the Earth.

“The total amount of material in Earth orbit is more than 7,600 tonnes,” Liou says. “About 23,000 large objects are being tracked by the US Strategic Command’s Space Surveillance Network (SSN). In addition, there are tens of millions or more debris too small to be tracked by the SSN but still large enough to threaten human spaceflight and robotic missions.”

There is also the risk, known as the Kessler Syndrome or Kessler Effect, where one piece of debris breaks off and hits another so that it becomes a cascade, which could end up polluting an entire orbit for satellites. Space is already part of everyday life, from telecommunications to disaster monitoring, the loss of any satellite is a significant issue.

The amount of debris escalated sharply in 2007 when China deliberately destroyed its Fengyun-1C weather satellite as part of an anti-satellite device test. Two years later an American Iridium 33 communications satellite collided with a spent Russian Cosmos 2251 spacecraft. Both these incidents will have ramifications for some time.

Last year, Nasa was involved in 21 collision avoidance manoeuvres by uncrewed spacecraft. Four were to avoid debris from Fengyun-1C; two to avoid parts from the Iridium 33-Cosmos 2251 collision.

Moving an object out of the way by altering its orbit is one method of diverting a potential crash, but the sheer amount of debris requires constant observation and prediction – by any means necessary.

“Nasa uses a combination of radars, telescopes, and in-situ measurements to monitor, but not track, objects down to sub-millimetre in size,” says Liou.

Nasa’s Space Debris Sensor orbits the Earth on the International Space Station. The sensor, a one-metre-square bit of kit around 20cm thick, was attached to the outside of the space station’s European Columbus module in December 2017. It will detect millimetre-sized pieces of debris for at least two years, providing information on whatever hits it – such as size, density, velocity, orbit – and will determine whether the impacting object is from space or a man-made piece of space debris. 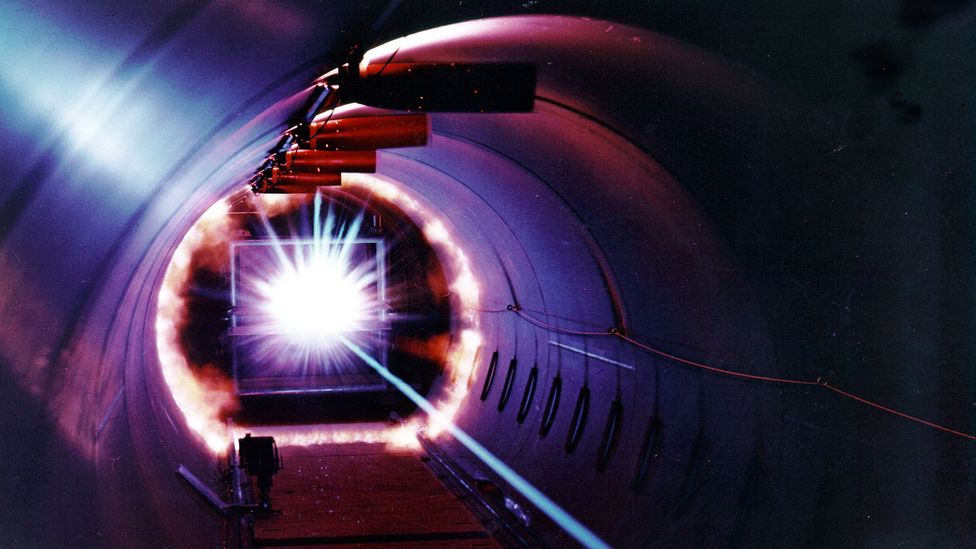 Nasa tests panels in labs by firing fragments at speeds up to 17,00mph (Credit: Nasa)

The United States is responsible for only around one-in-three of all known pieces of debris in low-Earth orbit so Nasa isn’t the only organisation working on the problem. This is an international effort that affects every space-faring nation; Russia’s space agency has already signed an agreement to install a new debris-tracking telescope in Brazil.

There is also a market for private initiatives to monitor space debris and sell data to satellite operators. This includes ExoAnalytic Solutions in the US and Space Insight in the UK – the latter operates a ground-based system of sensors in Cyprus. In Spain, the Deimos Sky Survey uses a network of telescopes to track near Earth objects such as asteroids as well as space debris. It also spotted Elon Musk’s car in space.

But not every piece of debris can be dealt with by collision avoidance. In April, the first European Active Debris Removal mission will launch from a SpaceX Falcon 9 rocket on its way to resupply the International Space Station. Called REMOVEdebris, the satellite will contain two cubesats that will release simulated space debris so that it can then demonstrate several ways of retrieving them.

Four key technologies will be tested, says Guglielmo Aglietti, director of the UK’s Surrey Space Centre, which is coordinating the mission. These include a visual navigation system, a net and a harpoon used to capture debris and a de-orbit sail use to slow the debris so it falls into the Earth’s atmosphere.

We will have demonstrated that space debris removal could be done using relatively low-cost technologies - Guglielmo Aglietti, Surrey Space Centre

A harpoon in space sounds far-fetched but, for larger pieces of debris, it could be all that is needed. For this demonstration, the harpoon, built by Airbus Defence & Space in the UK, is the size of a pen.

The mission will deploy a 10-sq-cm panel on a boom 1.5m (5ft) away. The tethered harpoon will then be fired from the spacecraft to pierce and retrieve the panel. The net idea is similarly simple; it will surround and trap debris.

The experimental drag sail, which is a plastic membrane, can only be tested after the other technologies. “During a real mission this would be the last phase,” says Aglietti, “when the platform and the debris that it has captured are deorbited together.”

If REMOVEdebris is a success, this will be the start of further missions. “We will have demonstrated that space debris removal could be done using relatively low-cost technologies,” says Aglietti, “and therefore we hope that commercial ventures could follow and perform removal of the debris that poses the highest threat.” 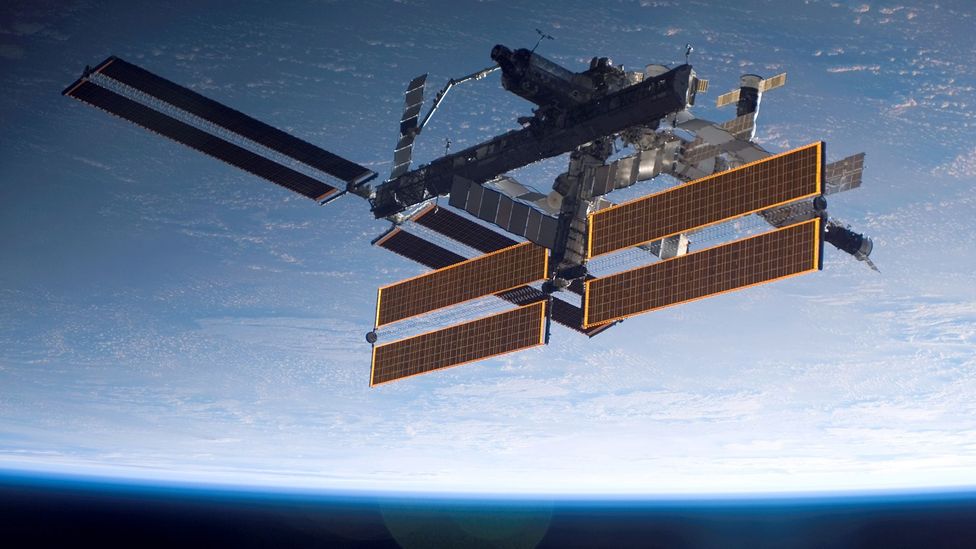 Even the International Space Station has to evade debris left from earlier missions (Credit: Nasa)

“E.deorbit will demonstrate that we can remove an uncontrolled object safely from orbit,” says Holger Krag, head of Esa’s space debris office. “It could be an Esa satellite that’s defunct and will no longer react to any command from the ground. We would, for the first time, apply technology to a target satellite that’s real.”

The removal spacecraft will be equipped with a sensor suite in order to approach the satellite safely. This is no mean feat. “It is a challenge to approach a controlled object like the ISS for docking,” says Krag, who is based at the European Space Operations Centre in Darmstadt, Germany.

We take space debris seriously because we are operating a fleet of 20 satellites – Holger Krag, Esa

The uncontrolled satellite could also be tumbling or spinning. “If it’s tumbling you have to synchronise yourself and then somehow capture it. You could use a robotic arm, net or harpoon and the next step then is to apply a manoeuvre in order to bring it down.”

Esa has already had a close call. In August 2016 a centimetre-sized particle hit one of the solar arrays on Esa’s Sentinel 1A satellite and produced a small reduction in power and a slight change in the spacecraft’s orbit and orientation.

“We take space debris seriously because we are operating a fleet of 20 satellites from here in Darmstadt,” says Krag. “Ten of them are flying in a very densely polluted area of space and we regularly have to conduct collision avoidance manoeuvres.”

But Krag is also pragmatic about the scale of the problem. “We can limit the risk but cannot completely avoid the risk between collisions,” he says. “We can just do our best.”