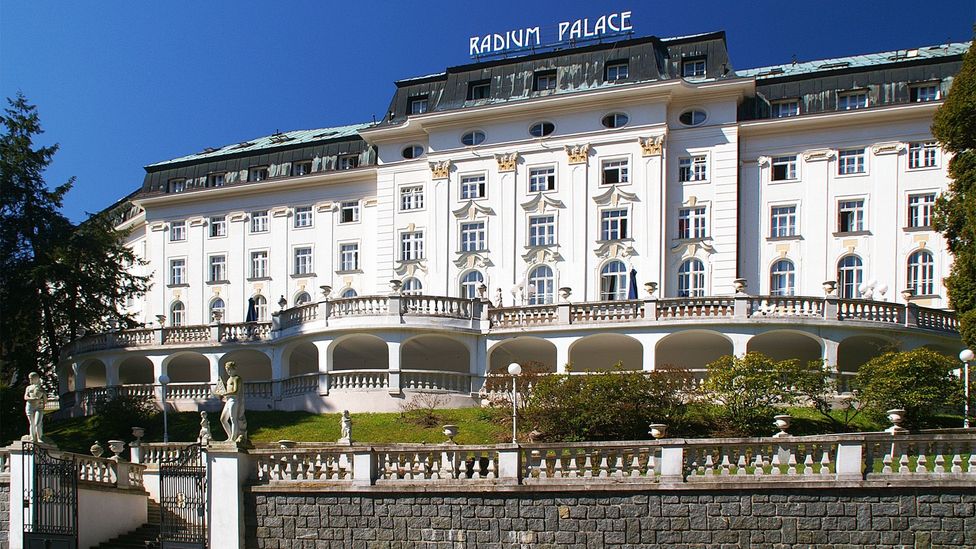 By Matthew Vickery 7th March 2018
BBC Future visits a health resort with a difference - with a history that dates back to Soviet-era mine labour, patients now flock here for an unusual treatment.
W

Water drips down from the narrow mineshaft’s rocky, damp ceiling, droplets echoing as they hit the rusty rail tracks used decades ago to haul stone – some of it laden with uranium ore – out of the tree-covered hillside and into waiting Soviet train carriages.

“I remember that whether it was cold or hot outside, it was always the same temperature in there, always hot,” Zdenek Mandrholec says, using a cane to steady himself as he stands outside the mine’s entrance in the Czech Republic town of Jachymov on the Czech-German border.

“They [the Soviets] could do anything they wanted to us.” 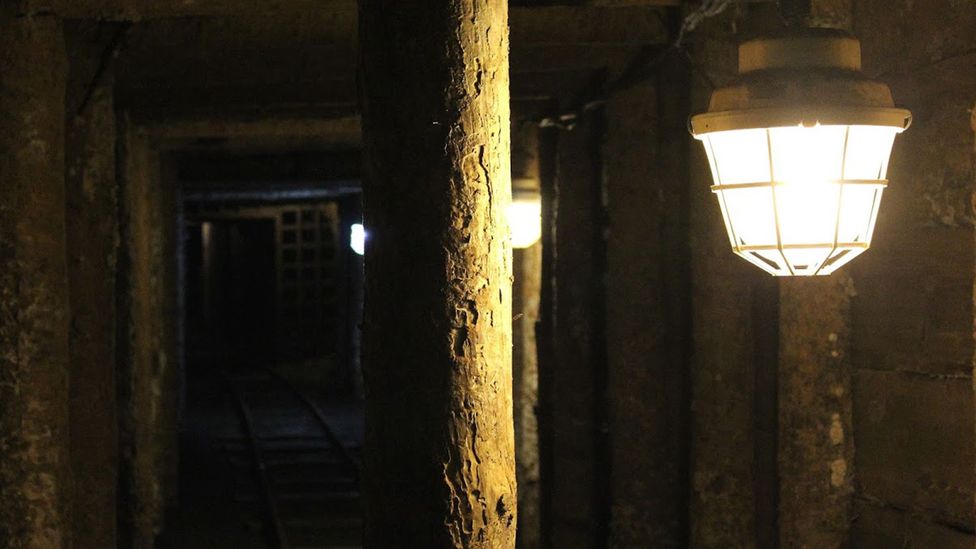 The Soviets used Czech labour to dig for uranium in the mines (Credit: Matthew Vickery)

The 87-year-old may be too frail these days to enter the mine himself, but he’s well aware of what it’s like in there – he spent seven years as a Soviet political prisoner, forced to mine uranium to fuel the Cold War nuclear arms race.

The hills surrounding Jachymov are full of uranium. Ore containing uraninite was first discovered in Jachymov by Marie Curie at the end of the 19th Century, but it was when the communists took over Czechoslovakia in the wake of World War Two that uranium mining really took off – fuelled by thousands of political prisoners like Mandrholec. At its peak in the 1950s, 12 uranium mines were operating in and around the village, turning the hills into a dangerous underground nuclear maze and Jachymov into one large Soviet concentration camp.

Used as disposable labour, prisoners were exposed to nuclear material with little protection bar crude masks and overalls. Near the entrance of the village a redbrick tower continues to loom decades later – the “Tower of Death”, Mandrholec remarks, a place where uranium ore was ground down to dust and where prisoners were forced to work without any protection at all.

Inside the mines accidents were common, with the coarsely hollowed-out channels collapsing frequently with men inside.

“I remember one time the roof collapsed on one man and swept him into one of the vertical holes in the mine, we were picking out pieces of him for days,” Mandrholec, who was captured and imprisoned after attempting to flee the country in 1953, says clearing his throat and wiping his eye.

“We could talk about these sort of accidents all the way through to the morning,” he adds.

While those same mines Mandrholec toiled in for years were closed down decades ago, one uranium pit remains curiously open in the village.

But uranium isn’t mined there anymore – radioactive water is.

Countless buildings lie abandoned, dilapidated, and falling apart in Jachymov, yet one huge, pristine-white spa complex, Radium Palace, dominates the entrance of the village. Inside the building, which was opened in 1912, affluent patients wander on red carpets through grand hallways in white robes. Some of them here for a very alternative treatment – a bath in water radioactive with radon, a byproduct of uranium. For years, springs have run through these mines, flowing with this water. 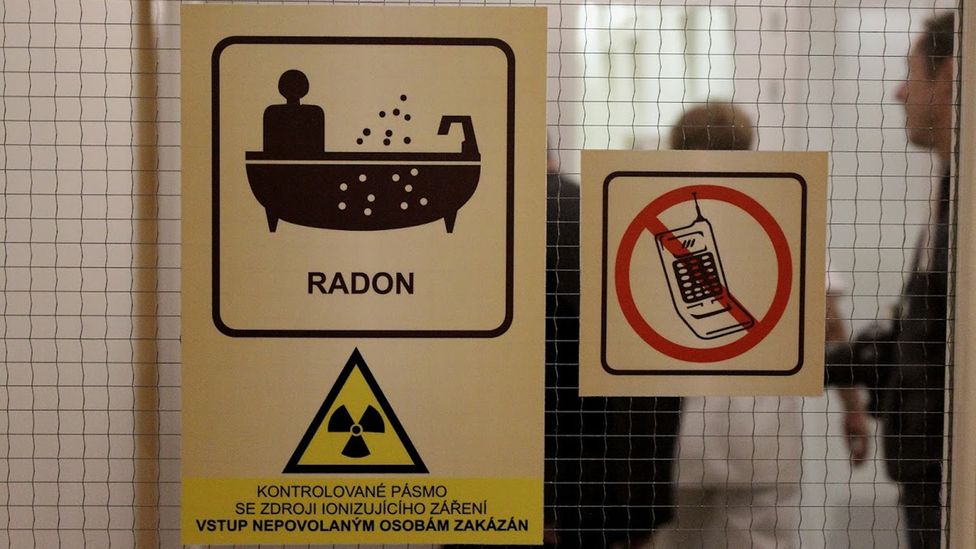 Stickers adorn entrance to an area where radon water therapy is carried out, warning of radioactive material (Credit: Matthew Vickery)

Although immersing your body in water from a uranium mine would seem like the one thing you probably shouldn’t do with radioactive wastewater, doctors at Radium Palace say otherwise.

“There are two clinical benefits to radon water; first it has an anti-inflammatory effect – we know that it reduces inflammation. The second one is it has a direct algetic effect, it can work like a painkiller with a similar effect to morphine, but one that can last a far longer time,” Jindrich Masik, the head physician at Radium Palace tells BBC Future from his spotless examination room.

“We have different limits of radiation. For patients there are no limits, we can use what we want but in fact we use what is risk-benefit suitable – so what that means is that we don’t want to make any damage, we want to help of course. We use very small dosages.” 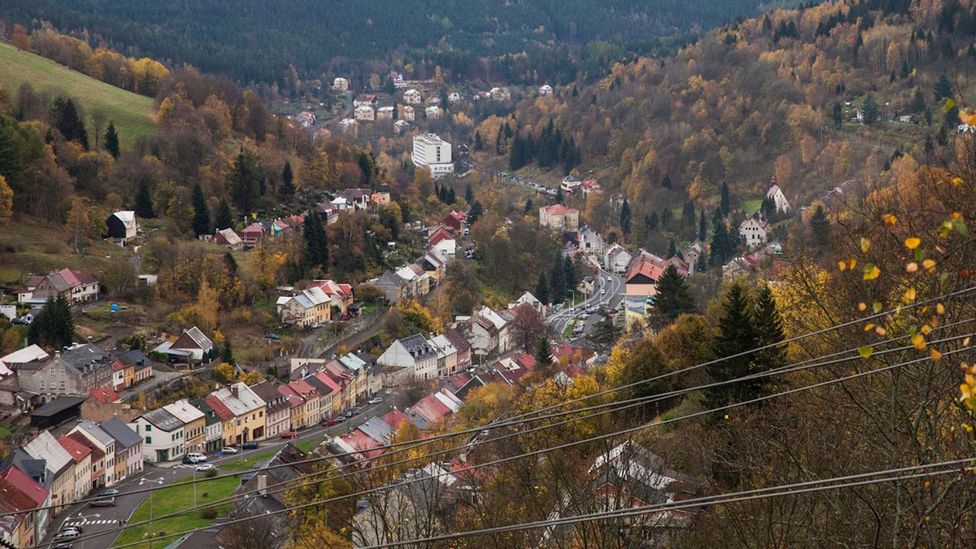 Uranium was first found in the hills around Jachymov in the 19th Century (Credit: Martin Trabalik)

Visitors come seeking relief from the symptoms of a range of afflictions, from neurological disorders to arthritis and gout. Vaclav Pucelik, who suffers from a chronic inflammatory condition affecting the axial joints and who is one of Masik’s patients, says the benefits far outweigh any negatives. He’s been returning to the spa for 30 consecutive years, specifically for the radon water treatment.

“Nothing was working for my pain, someone recommended the radon baths, and now I come here and go into the baths for 20 minutes a day. But I can only come and stay here and get the treatment once a year because it’s radioactive,” Pucelik says, waxing lyrical about the spa and luxury hotel. “Each spa should have a natural material or source they use – here it’s radon.”

Wealthy Arab guests sit in the large on-site restaurant, while Russians and Czechs appear to prefer the conservatory bar that looks out on the spa’s well-kept lawn

With each treatment stay at the spa lasting 24 days, Pucelik is a well-known face among the staff at the luxury hotel, being heartily greeted as he makes his way from section to section. Wealthy Arab guests sit in the large on-site restaurant, while Russians and Czechs appear to prefer the conservatory bar that looks out on the spa’s well-kept lawn. In the lobby, a topless statuette is perched beside dark-red carpeted stairs that lead towards lavish hotel rooms.

It’s on the basement floor however that the radioactive material sits.

Acting as a tour guide, Pucelik happily pushes open wood and glass doors emblazoned with warning stickers with the infamous radioactive symbol. Through the doors nurses walk around in white scrubs, to the right of them sit separate rooms divided with hospital curtains, each with a large Jacuzzi-esque bath sitting in the center – the radon baths where patients submerse themselves in radioactive water gleaned from the nearby hills.

Yet with the heavily mined hills complete with dark Soviet past being used by the extravagant complex for it’s bizarre and expensive health treatment, there’s no getting away from the striking juxtaposition between the wealth and (supposed) health of the radon spa and the tragedy that happened in the mines decades before. 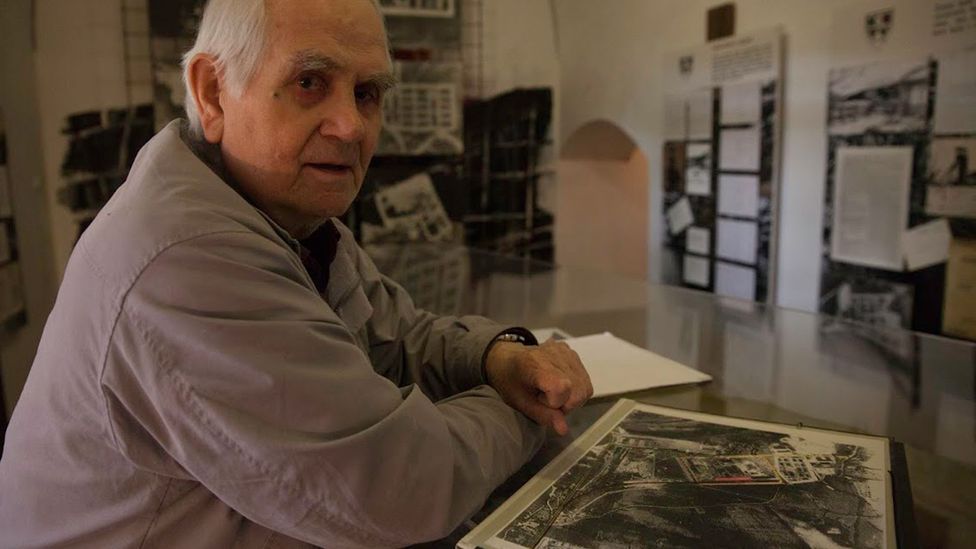 Vintrova Mandrholec with satellite photos of the prisoner camp he was imprisoned in (Credit: Martin Trabalik)

It’s a connection the patients and staff don’t appear to make when asked, or maybe prefer to avoid.

For Mandrholec however, he holds no grudges against the spa for profiting from the mines’ existence, nor the patients who, with medical options exhausted elsewhere, have decided to delve into this odd world and seek an alternative therapy.

In fact, Mandrholec appears impressed, even proud, as he enters Radium Palace’s lobby shortly after giving BBC Future a tour of Jachymov.

“It was a terrible waste that the material was not used before for the country – if it had, we could have been like Switzerland, we could have had highways, schools, be more developed,” Mandrholec says. “Instead it was given for free to the Soviet Union, and the Czech slaves had to do it.”

As Mandrholec introduces himself to the wealthy Czech patron, Pucelik stretches out a hand – a brief acknowledgment of both their roles in the working existence, past and present, of the uranium mines of Jachymov.