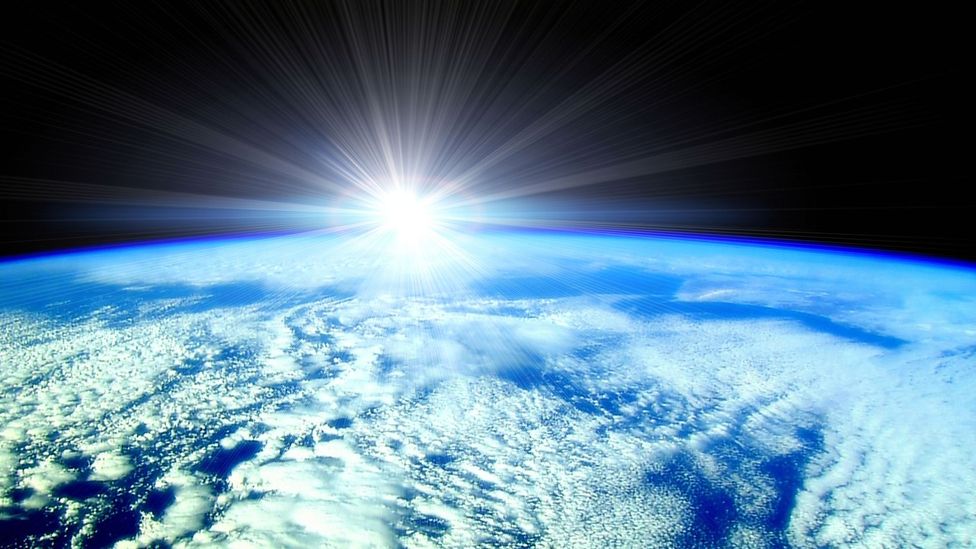 By Zaria Gorvett 16th March 2018
Many are too young to drink, drive, or even catch an Uber – but they’re already filing patents.
T

They’re known for their mood swings, social media addiction and dubious fashion choices. But some teenagers break the mould. A new generation of precocious youths is solving the problems of today with ambitious, ground-breaking tech.

So in case you didn’t already feel like an underachiever, here’s our shortlist of four incredible teenagers already reshaping the world we live in.

Cavé’s journey of invention began with the Deepwater Horizon oil spill, which unfolded in the Gulf of Mexico in 2010. It led to the largest maritime slick in human history, consisting of 4.9 million barrels (210 million gallons, or 780,000 cubic metres) of oil in one of the most ecologically important bodies of water on the planet.

In the immediate aftermath, baby dolphins began dying at six times the usual rate, while fishermen and scientists reported “disturbing numbers” of deformed sea creatures including shrimp with missing eyes and eye sockets, and fish with oozing sores and lesions.

Watching the news reports on TV, Cavé instantly felt that there must be some hidden environmental damage. She decided to focus her attention on discovering what was really going on. 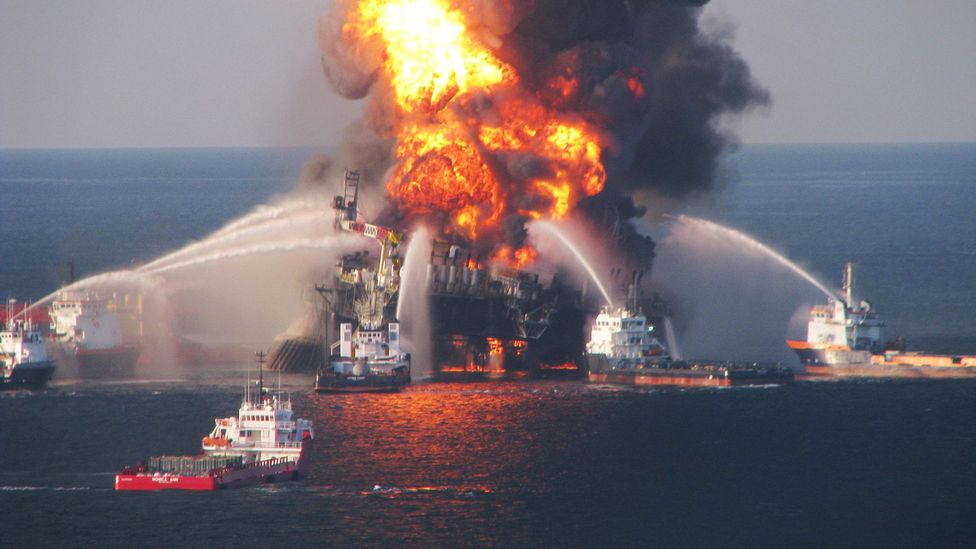 The Deepwater Horizon accident caused horrendous damage to the ecosystem in the Gulf of Mexico (Credit: Getty Images)

At 15, the teenager began studying what happens to oil when it’s left on the ocean’s surface and discovered that when it’s hit by UV rays from the Sun, it reacts to form chemicals that are carcinogenic.

Today she’s turned her work into two scientific papers and two patents, for chemical methods of detecting the carcinogens. She’s also launched a startup, Mare, which is working towards a way to disperse them so that they aren’t as damaging. Oh, and her research has just received $1.2m (£860,000) in funding.

When Shaarook was a child, he’d spend hours staring through the lens of a telescope with his dad. Sadly Mohamed Farook, a local professor and scientist, passed away when his son was in primary school.

But Shaarook’s passion for space lived on. As a young teenager he joined Space Kidz India, an organisation dedicated to nurturing young people with a passion for technology. He formed a six-person team and dedicated the next four years to making a satellite, under the guidance of the organisation’s founder and director.

Every night, the teenagers would discuss their plans on video calls, often until 4:30 in the morning. Eventually they invented KalamSat: the lightest satellite in the world.

At just 64g, it weighs about as much as a large battery. It’s essentially a 3.8cm-wide cube made from 3D-printed plastic, reinforced with carbon fibres. It contains several different kinds of sensor, including those to measure temperature, magnetism, altitude and any strains on the structure as it hurtles through space. It also has its own power source and a small computer, to turn on all the sensors at the right moment and store their data.

The plan was to get KalamSat into sub-orbit, to test the performance of reinforced plastic in micro gravity. Lightweight materials that can withstand the stresses of space travel are extremely useful, since it costs around $10,000 (£7,191) to launch a pound (450g) of any substance into space. After reaching its destination, it would spend just 12 minutes collecting data, before falling back down to Earth and landing in the sea.

On 22 June 2017, the device was successfully launched at Nasa’s Wallops Island facility in Virginia – the very same spot that its namesake, famous rocket scientist and former president APJ Abdul Kalam, once visited over half a century earlier.

Herbst was inspired to invent at the age of 15 by her then-nine-year-old pen pal, who lives in Ethiopia and did not have access to lights. This is surprisingly common: there are 1.3 billion people alive today without electricity. So this student came up with the Beacon (Bringing Electricity Access to Countries through Ocean Energy), which captures energy directly from ocean waves.

Herbst’s thinking was that populations tend to settle around bodies of water; about 40% of the world's population lives within 100km (62 miles) of the coast and only 10% lives further than 10km (6.2 miles) away from a source of freshwater that you don’t have to dig for, such as a river or lake.

The technology consists of a hollow plastic tube, with a propeller at one end and a hydroelectric generator at the other. As tidal energy drives the propeller, it’s converted into useable energy by the generator. After designing a prototype turbine as a computer model, Herbst 3D-printed a prototype which she tested in an intercoastal waterway. 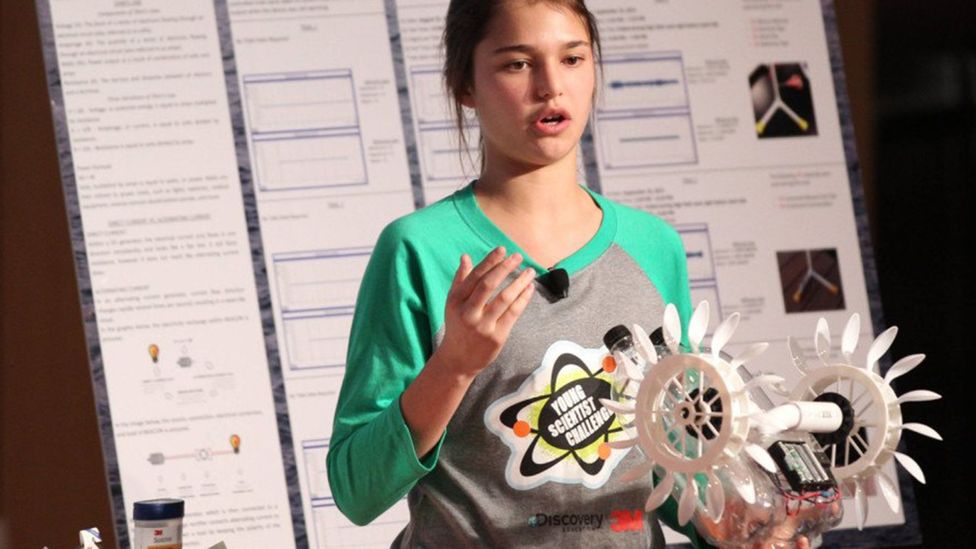 The Beacon can create electricity from almost any water source (Credit: Beacon)

If the design were to be scaled up, Herbst has calculated that Beacon could charge three car batteries simultaneously in an hour. She suggests that the energy generated could be used to power water purification technologies, or blood centrifuges at hospitals in the developing world.

The invention won the Discovery Education 3M Young Scientist Challenge in 2015, among numerous other awards, and Herbst is currently studying for a degree in computer engineering while she completes high school.

This inventor was just 13 years old when his mother was diagnosed with breast cancer. He watched in horror as the tumour swelled from the size of a grain of rice to a golf ball-sized lump in less than six months. She ended up losing both her breasts, though eventually she was cancer free.

Just a few years later, Cantu set out to protect others from the disease. Together with three friends, he formed the company Higia Technologies, which is developing a wearable device that may be able to detect the early signs.

The prototype EVA bra consists of sensors that can be attached to a normal bra, and may need to be worn for just one hour every week to work. The idea is to look for changes in skin temperature and elasticity, which are among many known signs of the disease. After each use, data is sent to the company’s app, and artificial intelligence algorithms use it to calculate the person’s risk. 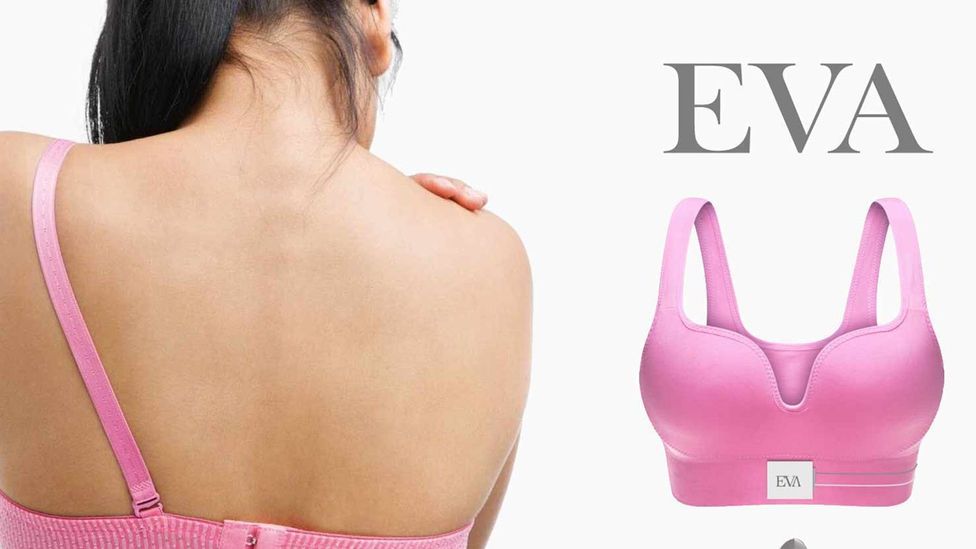 The EVA bra may need to be worn for only an hour a week (Credit: EVA)

The device has already raised $20,000 (£14,300) of funding by winning the Global Student Entrepreneur Awards, but it still looks to be a long way off production. It hasn’t yet gone through clinical trials and similar technologies have proved unreliable in the past.

However, if the project succeeds, it could help save millions of lives. Nearly 1.7 million new cases of breast cancer were diagnosed in 2012 and the same year, it led to over half a million deaths. For treatment to be successful, early detection is crucial.

Today’s teenage inventors are part of a long tradition. In fact, many of the world’s most prolific brains started young – coming up with television, telephones and trampolines, as well as braille, calculators, popsicles and ear muffs before they reached their 20th birthdays.

So while it’s true that all four students are considerably more wide-eyed and fresh-faced than their adult colleagues, make no mistake – any one of them could be the next Thomas Edison or Elon Musk.