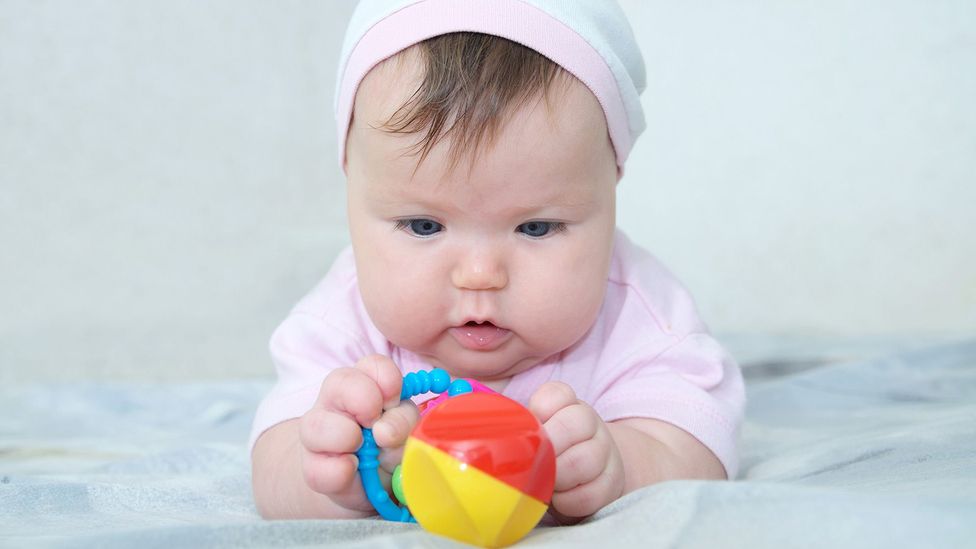 By Sophie Hardach 28th March 2018
This lab is revealing the hidden workings of babies’ brains… and could prove key in getting earlier support to children who have neurological differences like autism.
I

I am sitting in a lab in London, holding my wriggling baby son in my arms, while two scientists gently try to remove a futuristic-looking cap from his head. The cap, which looks a bit like a swimming hat topped by a tangle of cables, is part of one of the most cutting-edge tools in infant research. It could reveal unprecedented insights into the minds of babies and transform our understanding of early development.

But right now, my 11-month-old son does not want to be studied.

You may also like:
• Why do babies laugh out loud?
• Clues to your personality appeared before you could talk
• The mystery of why you can’t remember being a baby

Siddiqui is using a pioneering technique called functional near infrared spectroscopy, or fNIRS, to study what happens inside babies’ brain cells when they look at faces, patterns or objects. In particular, she is looking at an enzyme in the mitochondria – the tiny power plants in our cells that generate the energy we need to live. The equipment she uses shines near infrared light into the brain: light with a specific wavelength that passes through bone and tissue but is absorbed by blood. The kit has been specially designed to be comfortable for babies.

Unfortunately, mine would rather play with the cap than wear it. Siddiqui carefully lifts it off. Laurel Fish, a research assistant, blows soap bubbles across the lab. My son cheers up. I am beginning to understand some of the practical challenges of investigating the earliest weeks and months of human life.

How do babies make sense of the world? Like many new parents, my husband and I asked ourselves this question constantly from the moment our son was born. Our infant seemed like a nocturnal little alien, mysterious and fascinating. He obviously had no idea what clothes were, so did he just think we were changing colour all the time? And since he had no sense of perspective, did he think we changed sizes when we walked across the room?

There is a long history of scientists exploring the secret world of babies. Darwin, for example, published a detailed diary of observations of his baby son (“...when he was 66 days old, I happened to sneeze, and he started violently”); his children became a way for him to develop his theory of evolution. But this history is also studded with some extraordinary misunderstandings, perhaps because babies cannot tell us what they think and feel. In the 19th and 20th Centuries, many scientists even held the belief that babies could not feel pain. 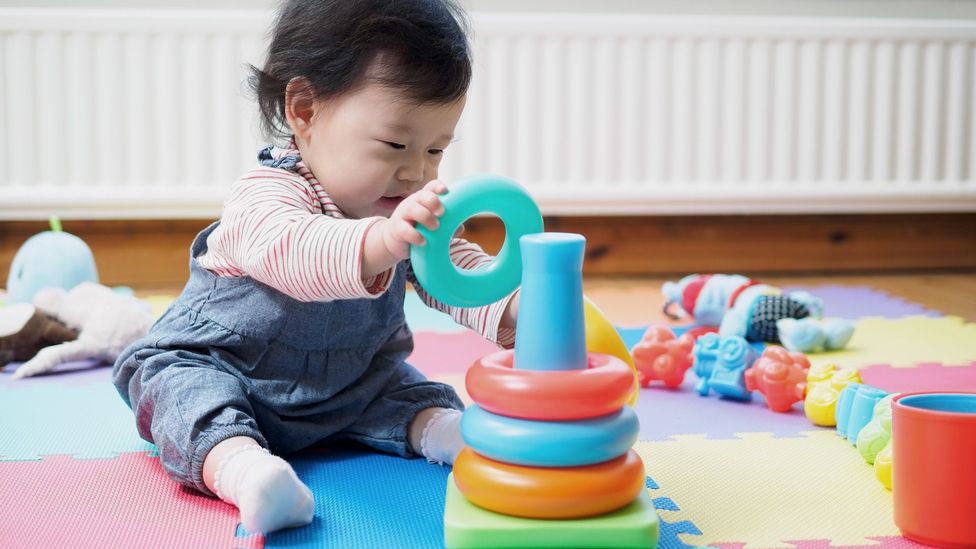 There is a long history of scientists exploring the secret world of babies (Credit: Getty Images)

Modern research, on the other hand, paints a picture of babies as alert, sensitive and intelligent. In our first few years, more than one million new neural connections are formed every second. Much of this busy brain work is hidden. Over the past two decades, however, technological advances have helped scientists reveal more of it.

“This is the perfect mix of philosophy and science because you really are asking about things such as the origins of knowledge, and how thinking becomes, and how learning develops,” says Natasha Kirkham, an expert in child development and researcher at the Babylab. “I mean, these are really kind of big questions.”

In the early 2000s, much of infant research involved tracking the babies’ eye movements and laboriously analysing the results frame by frame, Kirkham says. “But now – it’s incredible what we can do. The neuroscientific technology has come on in leaps and bounds,” she tells me. “There is so much stuff you can do with a baby and learn so much about what they are thinking without them having to tell you.”

Except, of course, when they don’t feel like cooperating. 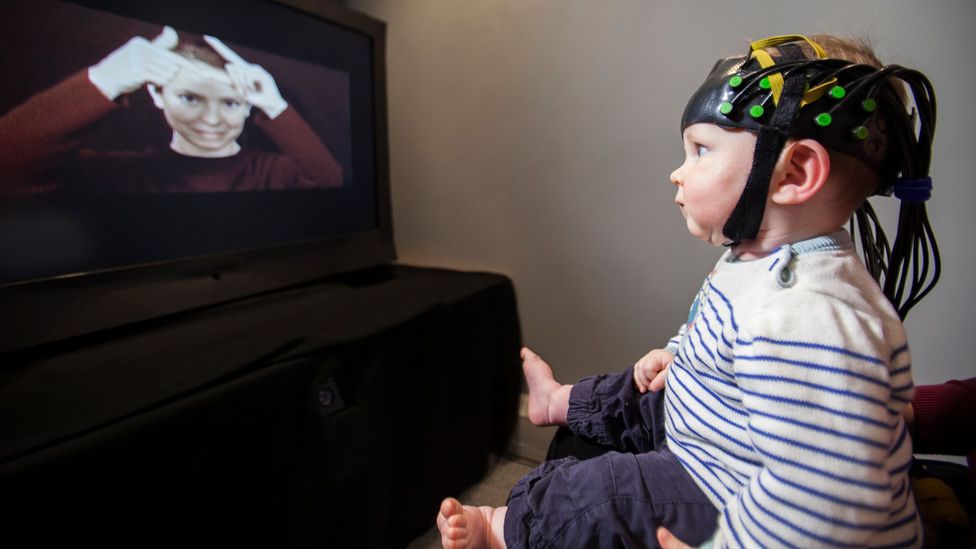 Having rejected the cap, my son is now watching a woman recite nursery rhymes on a screen in front of him, clearly more satisfied with this part of the experiment. For all his outward calm, his brain is now probably tremendously busy, especially the area located just behind his ear. This patch, known as the superior temporal sulcus, or STS, is part of our ‘social brain’. It is here that we process our encounters with others.

In adults, the social brain is well-researched. But in babies, it used to be completely inaccessible

In adults, the social brain is well-researched. But in babies, it used to be completely inaccessible. Babies simply don’t sit still long enough for more conventional instruments, such as MRI scanners, to work while they are awake.

This is where near infrared spectroscopy comes in. Siddiqui uses a new type that can measure activity at the cellular level, inside the mitochondria. There is some evidence that differences in mitochondrial function could be linked to autism. So far, the research has consisted of studies of postmortem brain tissue. She is hoping to eventually test the hypothesis on live babies.

Siddiqui’s project is one piece of a vast jigsaw puzzle of knowledge slowly being assembled at the Babylab. Researchers are gathering information from MRI scans of sleeping babies, sophisticated eye-trackers, EEGs that measure electrical activity in the brain, and even heart-rate monitors.

One common goal is to understand what typical development looks like, and then investigate why and how some babies develop differently. This involves studying their minds as well as their environment. Kirkham, for example, is interested in how babies manage to tell important from unimportant information, especially in disorganised surroundings. 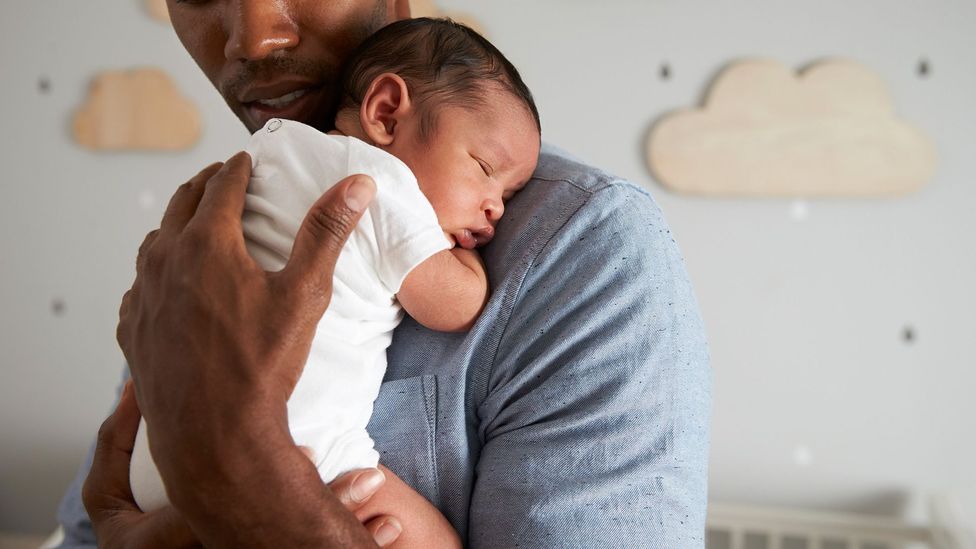 Having predictability and consistency, particularly in terms of how the people around them behave, is key for healthy infant development (Credit: Getty Images)

Babies learn by observing the world, trying to detect patterns and predict what comes next. But this can be difficult if their environment is chaotic, or if people around them behave unpredictably.

There are too many individual factors involved for Babylab’s scientists to give specific parenting advice. But their research does allow parents to make more informed decisions – and not just because it underlines the importance of loving, consistent care. For example, their research on the effect of touchscreens on babies and toddlers found that their use is associated with less sleep, but earlier development of fine motor skills. 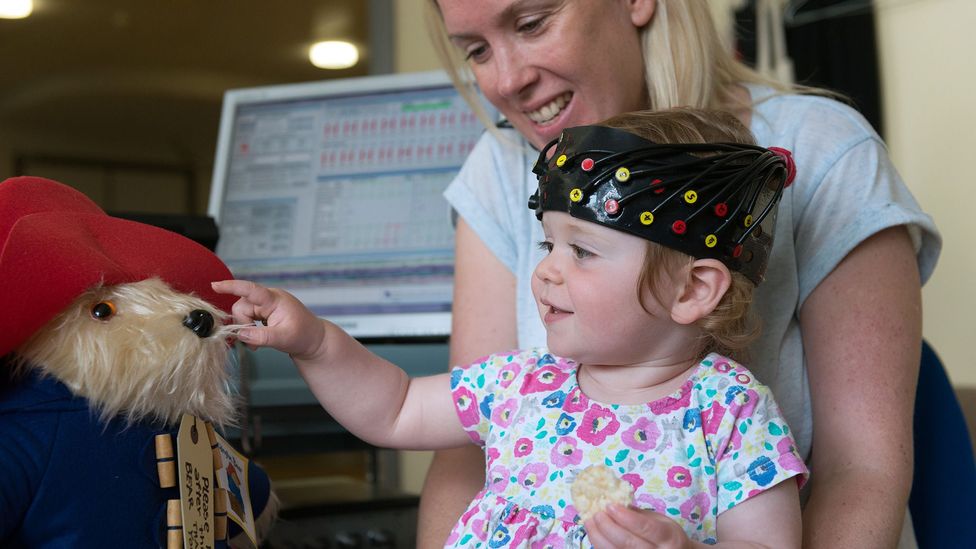 One of the Babylab's goals is to understand why some babies develop differently (Credit: The BRIGHT Project, funded by the Bill and Melinda Gates Foundation)

One tool that has proven particularly integral for these types of findings is near infrared spectroscopy. Shining near infrared light through the skull allows researchers to measure levels of blood oxygen in the brain. This in turn gives a picture of brain activity, since oxygen-rich blood flows into active areas.

When Babylab research fellow Sarah Lloyd-Fox began working with the technology more than a decade ago, it already had been used to study adult brains. To use it on babies, she had to develop it further with researchers at University College London. She now makes the standard headgear – a broad black band with attached cables – for other labs as well as conducting her own research. 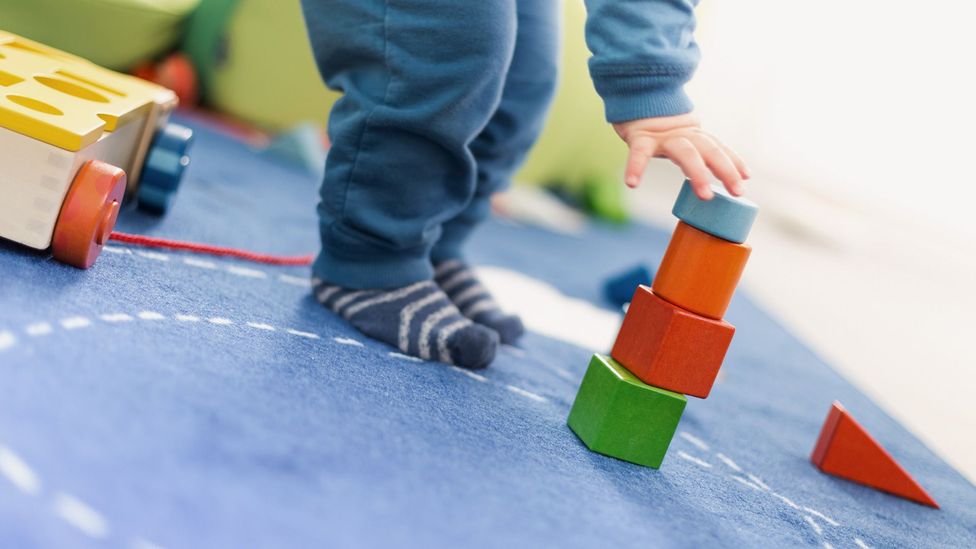 In our first few years, more than one million new neural connections are formed every second (Credit: Getty Images)

“I think I’m one of the pioneers,” she says as we sit in the lab’s waiting room, a cheerful, toy-strewn space that feels more like a nursery. My son seems to have forgotten all about the funny hat. He tries to climb onto Lloyd-Fox’s lap. She points out the area behind his ear that is probably being flooded with oxygen-rich blood right now, his social brain working hard.

Lloyd-Fox’s research has yielded a series of breakthroughs. One of her studies showed that babies as young as one day activate their ‘social brain’ in response to footage of a woman playing peekaboo. Another indicated that the brains of four- to six-month old babies at risk for autism responded less strongly to social cues compared to a low-risk group. No-one had been able to demonstrate this at such a young age before.

More generally, the technology raises the prospect of the early detection of a whole range of neurological differences, helping children get the right support long before the appearance of any outward symptoms.

“Behaviourally, you won’t be able to see if this child has autism, or has been affected by under-nutrition, or has had brain injury when they’re premature babies, potentially until they’re two or three years,” Lloyd-Fox says. “But you can look if there’s a brain response prior to that baby being able to respond in a behavioural way.”

Because the NIRS equipment is cheaper and more mobile than an MRI scanner, it also could revolutionise the study of infants in poorer countries.

In 2012, a clinic in the Gambia contacted the Babylab to ask if they could use NIRS to study local babies. Lloyd-Fox transported the gear across bumpy roads to a field station, where she was able to replicate her findings. 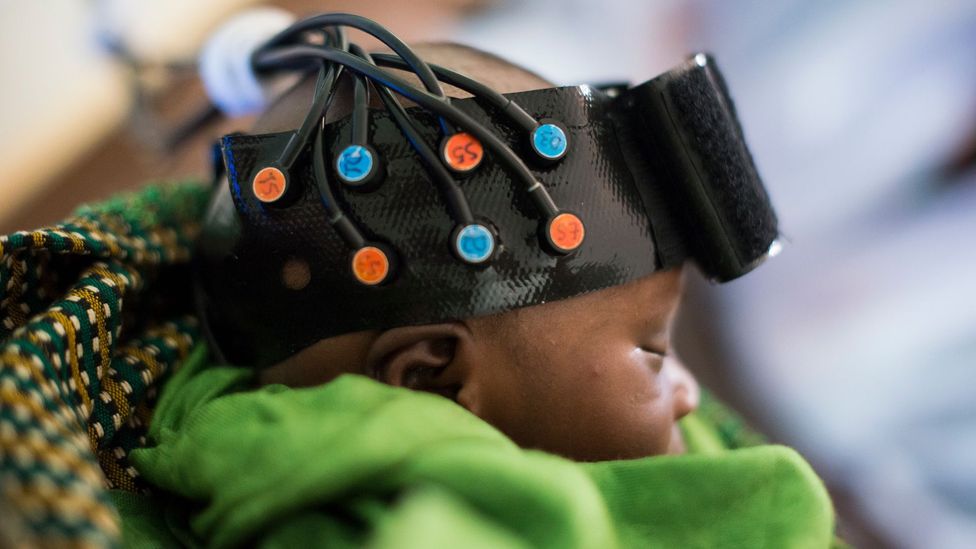 Babylab used infrared spectroscopy to study the effects of malnutrition on babies in the Gambia (Credit: The BRIGHT Project, funded by the Bill and Melinda Gates Foundation)

The project was not only a first for the Gambia, but for all of Africa: previously, there had not been any infant brain imaging of the kind in the region. The collaboration has now grown into a broader study of early development in the Gambia and Britain.

One area of focus is the impact of malnutrition, as 25 percent of Gambian children are severely undernourished.

“One of the big questions is, how does under-nourishment affect the brain?” says Lloyd-Fox. “Even in adult research they haven’t really done this, so we’re really flying blind in a way in this field. We don’t really know exactly which brain areas are affected in any person, not just infants.”

At home, the Babylab is also undergoing a major expansion. The next couple of years will see the opening of a toddler lab complete with a virtual reality cave, which promises a completely new perspective on that crucial developmental stage.

Much of what parents do instinctively – the cooing, the cuddling, the funny noises – has firm scientific backing

Toward the end of my visit to the lab, my son falls asleep. Today has been another exciting day for him, filled with many new impressions. I reflect on what the experience has taught me as a parent. It has been heartening to hear that babies really do observe us and respond to us long before they can express themselves. It is also gratifying to know that much of what parents do instinctively – the cooing, the cuddling, the funny noises – has firm scientific backing, and provides the best environment for the brain to develop.

And as for whether newborns think we change colour and size all the time? Kirkham, the child development expert, said this was a brilliant question. Her answer: yes, it’s possible that my son initially thought we changed colour. But most likely, he simply ignored our clothes and focused on what really mattered to him: our faces.

The Babylab at Birkbeck College is currently recruiting babies aged 0-12 months who have a sibling or parent diagnosed with Autism Spectrum Disorder for the NEST study. For more information, call 020 7079 0896 or email basis@bbk.ac.uk.