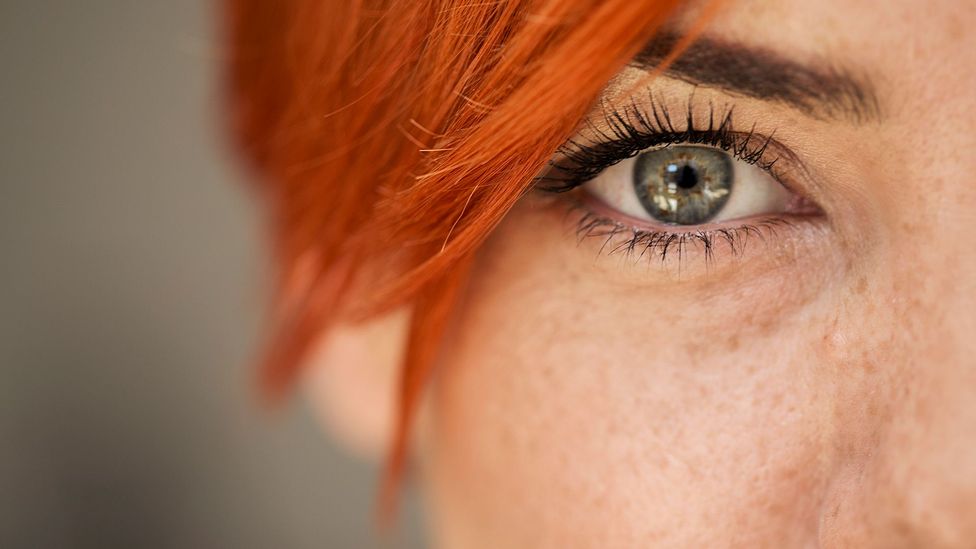 Depending on what language you speak, your eye perceives colours – and the world – differently than someone else.
T

The human eye can physically perceive millions of colours. But we don’t all recognise these colours in the same way.

Some people can’t see differences in colours – so called colour blindness – due to a defect or absence of the cells in the retina that are sensitive to high levels of light: the cones. But the distribution and density of these cells also varies across people with ‘normal vision’, causing us all to experience the same colour in slightly different ways.

Besides our individual biological make up, colour perception is less about seeing what is actually out there and more about how our brain interprets colours to create something meaningful. The perception of colour mainly occurs inside our heads and so is subjective – and prone to personal experience.

You might also like:
• Do we all see the same colours?
• The ‘untranslatable’ emotions you never knew you had
• How the colour red warps the mind

Take for instance people with synaesthesia, who are able to experience the perception of colour with letters and numbers. Synaesthesia is often described as a joining of the senses – where a person can see sounds or hear colours. But the colours they hear also differ from case to case. 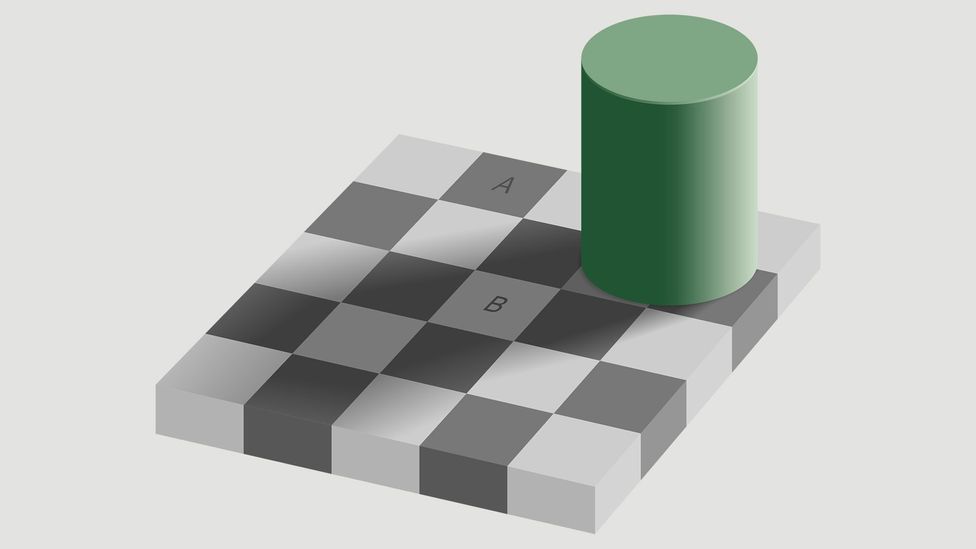 Squares A and B are exactly the same colour – but our brains think otherwise (Credit: Wikimedia Commons)

Another example is the classic Adelson’s checker-shadow illusion. Here, although two marked squares are exactly the same colour, our brains don’t perceive them this way.

Since the day we were born we have learnt to categorise objects, colours, emotions, and pretty much everything meaningful using language. And although our eyes can perceive thousands of colours, the way we communicate about colour – and the way we use colour in our everyday lives – means we have to carve this huge variety up into identifiable, meaningful categories.

Painters and fashion experts, for example, use colour terminology to refer to and discriminate hues and shades that to all intents and purposes may all be described with one term by a non-expert. 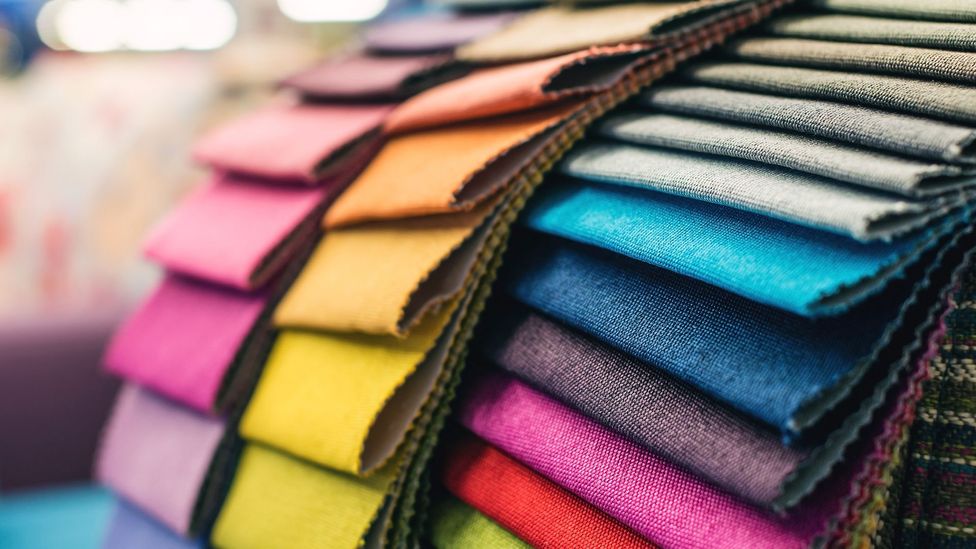 Those who work with fabrics or paints discriminate shades that the rest of us might lump under one category (Credit: Getty Images)

Some languages only have two terms, dark and light

Different languages and cultural groups also carve up the colour spectrum differently. Some languages like Dani, spoken in Papua New Guinea, and Bassa, spoken in Liberia and Sierra Leone, only have two terms, dark and light. Dark roughly translates as cool in those languages, and light as warm. So colours like black, blue, and green are glossed as cool colours, while lighter colours like white, red, orange and yellow are glossed as warm colours.

The Warlpiri people living in Australia’s Northern Territory don’t even have a term for the word “colour”. For these and other such cultural groups, what we would call “colour” is described by a rich vocabulary referring to texture, physical sensation and functional purpose.

Remarkably, most of the world’s languages have five basic colour terms. Cultures as diverse as the Himba in the Namibian plains and the Berinmo in the lush rainforests of Papua New Guinea employ such five term systems. As well as dark, light, and red, these languages typically have a term for yellow, and a term that denotes both blue and green. That is, these languages do not have separate terms for “green” and “blue” but use one term to describe both colours, a sort of “grue”. 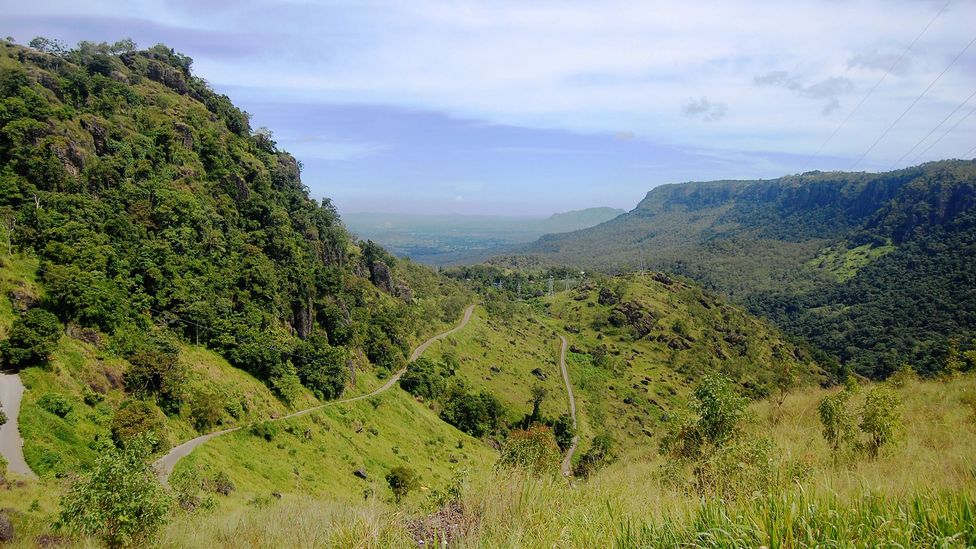 In Papua New Guinea, the Berinmo people use a single word to denote both blue and green (Credit: Getty Images)

Historically, Welsh had a “grue” term, namely glas, as did Japanese and Chinese. Nowadays, in all these languages, the original grue term has been restricted to blue, and a separate green term is used. This is either developed from within the language – as is the case for Japanese – or through lexical borrowing, as is the case for Welsh.

Russian, Greek, Turkish and many other languages also have two separate terms for blue – one referring exclusively to darker shades, and one referring to lighter shades.

Greek speakers, who have two fundamental colour terms to describe light and dark blue, are more prone to see these two colours as more similar after living in the UK

The way we perceive colours can also change during our lifetime. Greek speakers, who have two fundamental colour terms to describe light and dark blue (“ghalazio” and “ble”), are more prone to see these two colours as more similar after living for long periods of time in the UK. There, these two colours are described in English by the same fundamental colour term: blue. 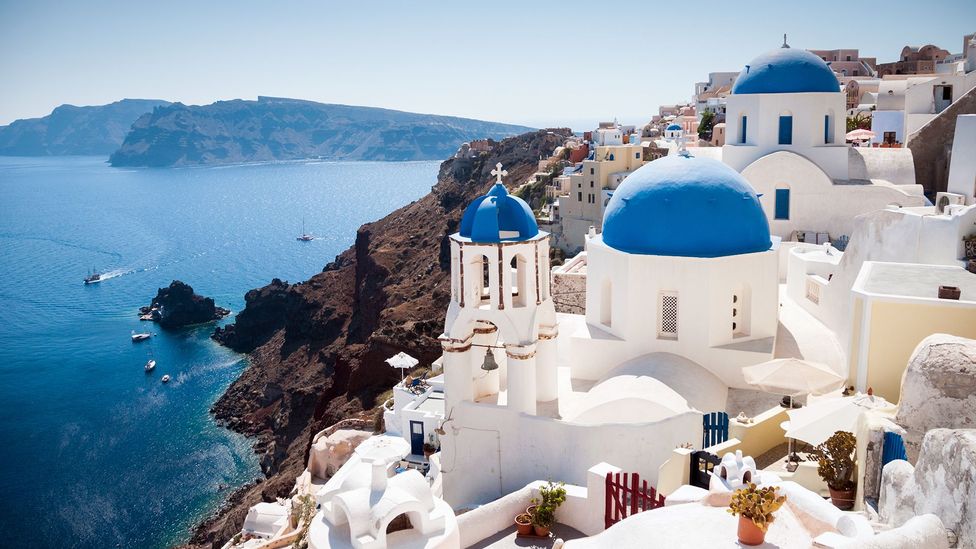 Greek speakers have separate words for shades of blue – and see those shades as more different than do English speakers (Credit: Getty Images)

This is because after long term everyday exposure to an English-speaking environment, the brain of native Greek speakers starts interpreting the colours “ghalazio” and “ble” as part of the same colour category.

But this isn’t just something that happens with colour. In fact different languages can influence our perceptions in all areas of life. In our lab at Lancaster University we are investigating how the use of and exposure to different languages changes the way we perceive everyday objects. Ultimately, this happens because learning a new language is like giving our brain the ability to interpret the world differently – including the way we see and process colours.