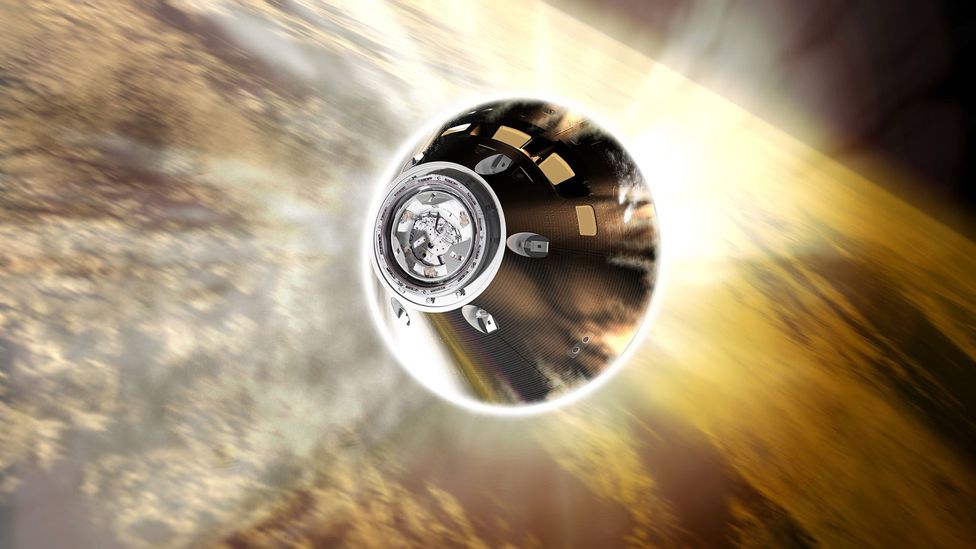 By Richard Hollingham 2nd May 2018
Crowded, smelly and seasick – life inside Nasa’s new spacecraft won’t be much fun.
I

In 1959, when Nasa’s original seven astronauts first saw their tiny single-man Mercury space capsule, they weren’t impressed. It appeared to have no windows and few controls – the elite test pilots complained that they would be little more than ‘spam in a can’.

This conflict between the astronauts’ desire to fly a spaceship and the engineers’ wish to simply get a man into orbit (and back alive) are illustrated in the movie The Right Stuff. With our silver-suited hero John Glenn threatening to share his views with the waiting press, who are clamouring at the hangar door, the engineers concede portholes and proper instrumentation.

Almost 60 years on, a similar scenario is playing out in Houston – albeit in slow motion. Right now, astronauts are negotiating with engineers over the final interior design and controls for Nasa’s new four-person Orion spacecraft. First flown without a crew in 2014, it’s due for launch with astronauts on board within the next five years.

You might also like:
• The astronaut fighting to save the ISS
• Astronauts bred for life in space
• The real story of the Apollo 13 crisis

Today, the John Glenn role is taken by a former submarine commander and veteran of three Space Shuttle missions, Steve Bowen. I ask him for his first impression of Orion. “It’s really cramped,” he tells me. “It’s really tight for four people. The two people at the back will be looking at the seat pans of the pilot and commander above them.”

Superficially, Orion looks much like the Apollo spacecraft that carried a crew of three astronauts to the Moon. Conical in shape, with a heatshield protecting the lower circular surface, the new spacecraft is a good deal larger but – because it still has to fit at the top of a rocket – not that much larger. And whereas Apollo missions only lasted a few days, with a stroll on the Moon to break up the journey, missions in Orion are planned for a minimum of three weeks and there’s no getting off. 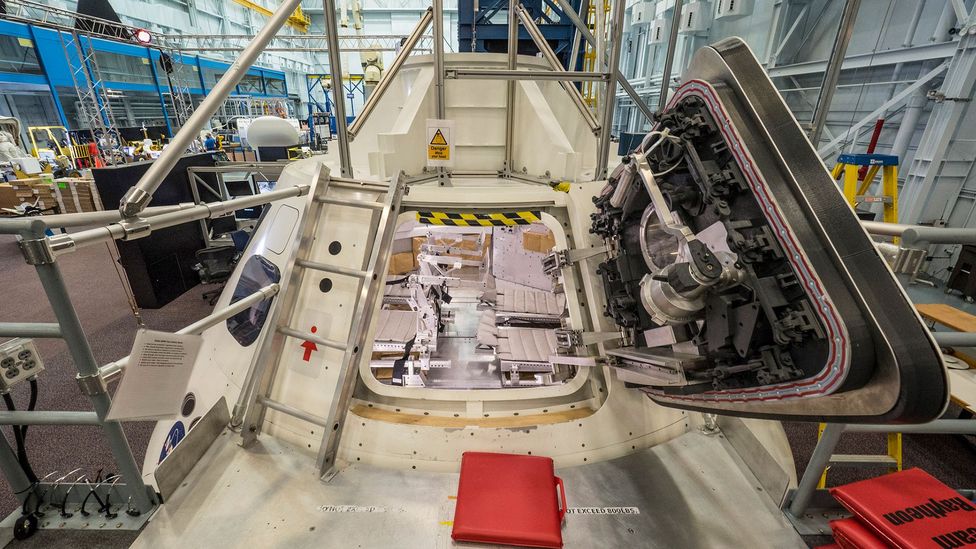 “I don’t know if all four people will be able to comfortably stretch out all their appendages at the same time,” says Bowen, who has spent his career living and working in confined environments. “But it’s been done before, I don’t think it’s prohibitive – you’ve just got to make sure you’re used to tight spaces.”

As well as the crew and controls, the engineers also need to cram in a galley, recreation area and toilet. “There are tweaks we can make, such as the seat configuration. Once we get that aspect done we’ll have a better understanding of the living quarters and how we’re going to operate inside it,” Bowen says.

I don’t think anyone finds it too spacious, but I haven’t heard anyone really complain about living in those confines

Although for long duration missions to Mars there will almost certainly be an additional habitation module, for the early Orion flights an area totalling nine cubic metres (316 cubic feet) is all the astronauts will have for working, sleeping, exercising and relaxing. Imagine spending several weeks with three work colleagues locked in a small room with a toilet. In space.

“Somewhere down the road we’ll get to our final design and that’ll give us our settled chance to say how are we going to live in it for weeks on end,” Bowen says. “I don’t think anyone finds it too spacious, but I haven’t heard anyone really complain about living in those confines.”

As well as helping to figure out how everything fits inside the spacecraft, astronauts are also involved in testing procedures for launch and landing. One of the big criticisms of the Space Shuttle (except on the early two-man flights), for instance, was the lack of any escape system if the rocket blew up during launch. This became horribly apparent when Challenger broke apart shortly after take-off in 1986, killing all seven crew members.

Orion will be launched on Nasa’s new giant SLS rocket. Like Apollo, Orion will have a small escape rocket fitted above the capsule to drag it away from a malfunctioning launcher.

The spacecraft will be launched on Nasa's SLS rocket, which is yet to launch (Credit: Nasa)

“The abort system test is coming up in the next few months,” says Bowen. “That’ll be really exciting to see – we’re also looking at what happens if something goes wrong at any point in the flight, so the crew gets more of a fighting chance.”

Bowen’s submariner experience has been particularly useful when it comes to working out the best way to recover the astronauts and spacecraft once they return to Earth – potentially one of the riskiest stages of any mission. Whereas the Shuttle landed on a runway, Orion will splash down in the ocean after entering the atmosphere at some 11km/s (6.8mps) and descending under parachutes.

Bowen has recently overseen Nasa’s latest Orion recovery test off the California coast. “It doesn’t have a keel, it doesn’t have its own propulsion, it’s basically going to be wallowing around – it’ll be an interesting ride even in a low sea state,” he says. “I’ve had enough experience at sea to see some of the saltiest crew members get violently ill – getting seasick is a real possibility.”

Because Orion is so heavy, the navy can’t use helicopters to lift the capsule onto a ship. Although after weeks – maybe months or years away – the crew will be desperate to leave the spacecraft, they might have to wait inside to minimise the danger of anyone drowning while trying to scramble out.

“Ultimately this vehicle is going to be in space for years. If we go to Mars, the astronauts’ physical condition is going to be very different to earlier programmes,” says Bowen. “So, the question becomes when do you get the crew out? Do you get them out early when they’re floating in the ocean or do you want to drag them into the well deck of a ship and get them out on what’s effectively dry land?” 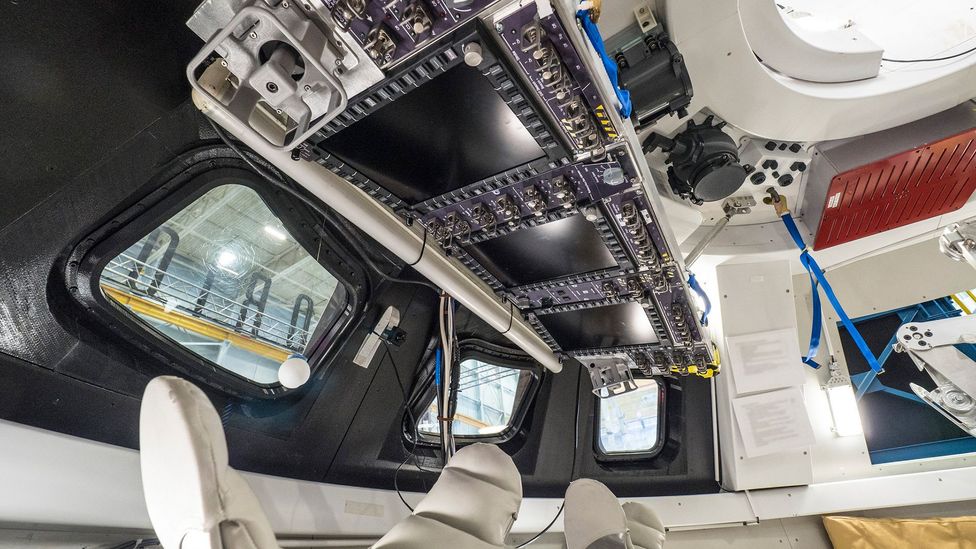 The spacecraft will have to carry four astronauts for missions lasting weeks (Credit: Nasa)

Orion was conceived more than 10 years ago but – with the newly defined Nasa goal of returning to the Moon – the programme is finally starting to come together. With the SLS rocket also taking shape, and with testing well advanced on both the launcher and spacecraft, it’s a reasonable bet that astronauts will take their maiden flight by 2025.

Despite the discomfort, danger and seasickness, Bowen would love to fly in the Orion spacecraft he’s helped develop. So, what are the chances?

“Who knows,” he says, diplomatically. “I’m in the astronaut office, my name’s still on the list, I’ve been around for a while… but I still feel good!”