Loading
Will We Ever? | Asteroid
How we could survive on an asteroid
Share using EmailShare on TwitterShare on FacebookShare on Linkedin 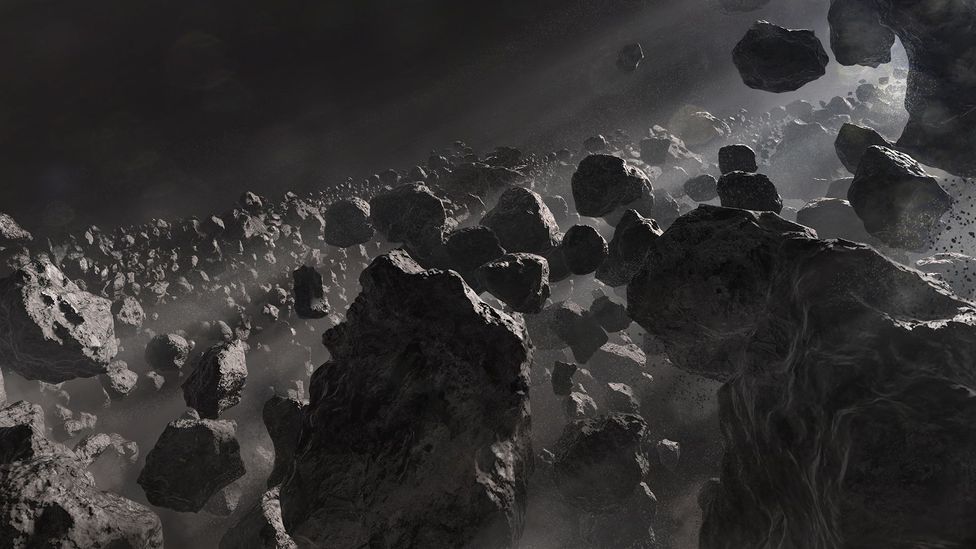 By Peter Ray Allison 13th June 2018
The asteroid belt is rich with precious metals. There are already plans for asteroid mining but could we ever build a colony on one?
T

The science-fiction series The Expanse is set 200 years in the future: humans have established colonies on the Moon and Mars, and have begun colonising the asteroid belt.

There are compelling reasons why we might wish to colonise the asteroid belt, but the predominant one is mining. Unlike the Earth, where precious metals tend to be buried underground, there is an abundance of metals like gold and palladium on the surface of asteroids. But they could also be used as a scientific research outpost.

The Asteroid Belt orbits the Sun between Mars and Jupiter, and is thought to be the remains of a planet. While the Asteroid Belt is the main source of asteroids, asteroids can be found throughout the Solar System and come in three basic types; stony, carbonaceous and metallic. They range in size from hundreds of metres to the size of a small house.

Companies like Planetary Resources and Deep Space Industries are already investing in asteroid mining and they could begin extraction by 2025. However, creating a settlement on an asteroid is far more complicated than simply mining one. 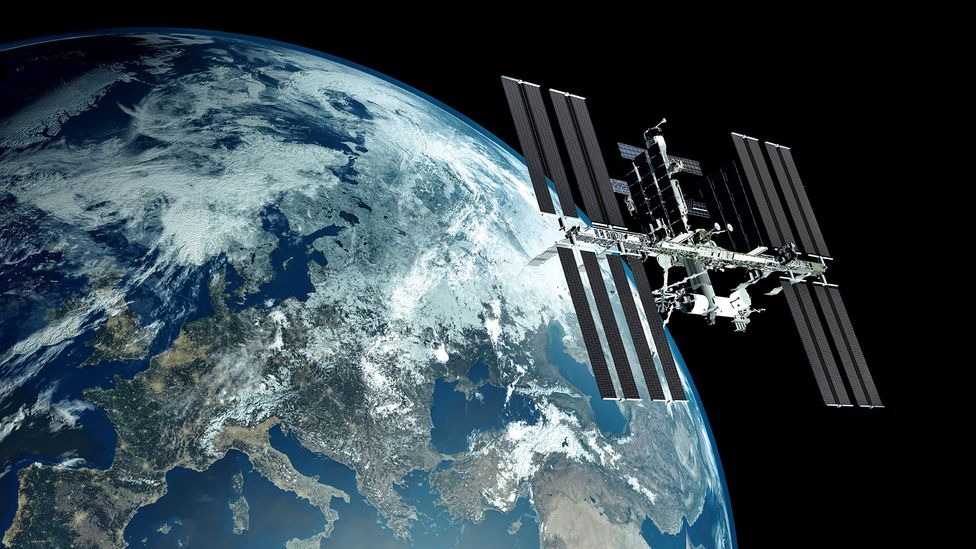 The ISS is less than 200 miles from Earth; the asteroid belt is many millions of miles away (Credit: Alamy)

One of the main challenges will be the amount of radiation hitting the colonies. There will be solar radiation, Jupiter’s radiation belt and more from cosmic rays. “Cosmic rays are high energy particles, mostly just protons or high-energy nuclei. They zip straight through you and do bad things to you,” explains Martin Elvis of the Harvard-Smithsonian Centre for Astrophysics. On Earth, our atmosphere absorbs the most dangerous rays, and a space colony would need a similar shield. “A thick layer of water or ice could be used [for protection], but it would have to be several metres thick.”

As well as radiation, long-term exposure to zero or micro-gravity is detrimental to the human body. “Astronauts on the ISS have to exercise for two hours every day with resistance machines and still end up with health problems from living in zero gravity for such a long time,” says astrophysicist Katie Mack, an assistant professor at North Carolina State University. Any long-term asteroid settlement would need some form of artificial gravity to mitigate this effect – possibly by spinning the entire structure.

By the time you get beyond the orbit of Mars and into Jupiter and Saturn territory then you have to build very large collecting areas to utilise solar power – Alastair Reynolds, astronomer

It would also need some form of power generation. Most probes and satellites rely on solar arrays for power, but this may not be as effective for an asteroid colony. “As you move further from the Sun, you have the ‘Inverse Square Law’ coming into effect. If you are twice as far from the Sun, then you have a quarter of the energy coming in from a given area of solar collecting panels,” says science-fiction author and former astronomer Alastair Reynolds. By the time you get beyond the orbit of Mars and into Jupiter and Saturn territory then you have to build very large collecting areas to utilise solar power, but I do not see that as being a major problem.”

The ideal type of asteroid to settle would be carbonaceous, as these are often 10% water. “Water is pretty common in space, as it is [made] of the most common elements in the universe,” says Elvis. “Water can also be broken down into oxygen and hydrogen, allowing you to breathe the oxygen.” The asteroid would also need to be at least 100 metres in thickness, to provide sufficient protection from radiation.

Settlements could be buried under the surface of an asteroid, which would provide radiation shielding. However, mining and excavating an asteroid is harder than it seems. “A lot of what we think of as asteroids are very loosely organised rubble piles that do not have any intrinsic structural integrity – they are not giant boulders,” explains Reynolds. “They are more just huge blobs or gravel held together by their own gravity.” 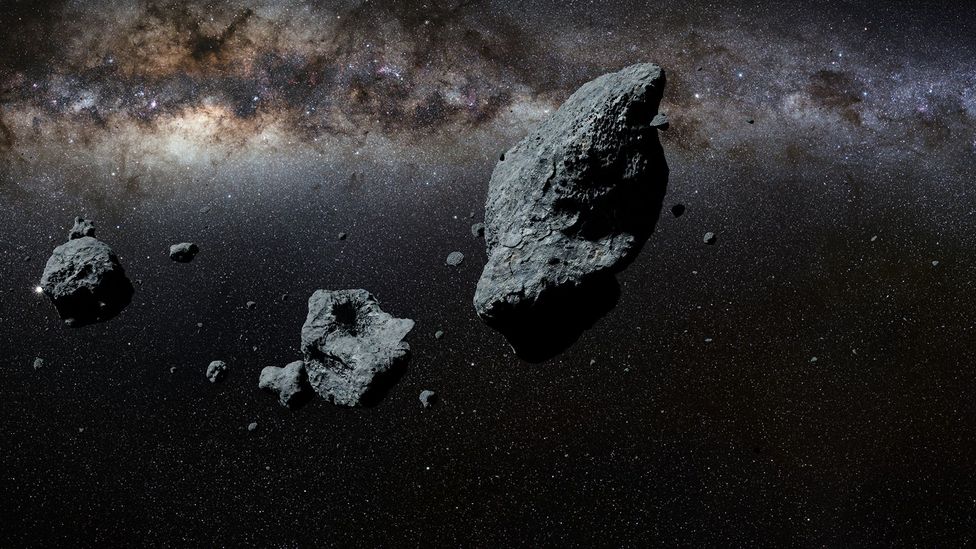 One major downside of asteroid is that they have zero-gravity - something that is detrimental to human health long-term (Credit: Getty Images)

This lack of material coherence will also mean that any attempts to spin the asteroid – to artificially generate gravity within the asteroid – would subject it to additional forces and risk it disintegrating. Therefore, some mechanism to improve the asteroid’s durability will be required. “You would have to empty it out without messing the structural integrity and then spin it up whilst making sure that spin does not put too much stress on the remaining structure,” says Mack.

One suggestion is to create a metal mesh or cage surrounding the asteroid to prevent it disintegrating. This is not as prohibitive as it may first seem, as the asteroid belt has an abundance of metallic asteroids with the necessary materials which could be used.

It could take months to get there and back, so if you have an emergency, you will have to deal with it on the asteroid – Martin Elvis, astrophysicist

Many of the challenges facing asteroid settlements are similar to those of the proposed lunar base. Apart from gravity, the only other major difference is distance. The Moon and the ISS are comparatively nearby. The Moon is only a mere 225,623 miles (361,000km) away at its closest point, and the ISS is just inside the Earth’s atmosphere. On the other hand, the asteroid belt is approximately 160 million miles (256 million km) away.

Any asteroid settlement would need to be a closed eco-system, and self-sustaining, as support from Earth will be extremely limited. “It could take months to get there and back, so if you have an emergency, you will have to deal with it on the asteroid. You will need an awful lot of people, you do not just go out there and have a [Star Trek] replicator,” says Elvis. Even sending a message to Earth could take an hour. 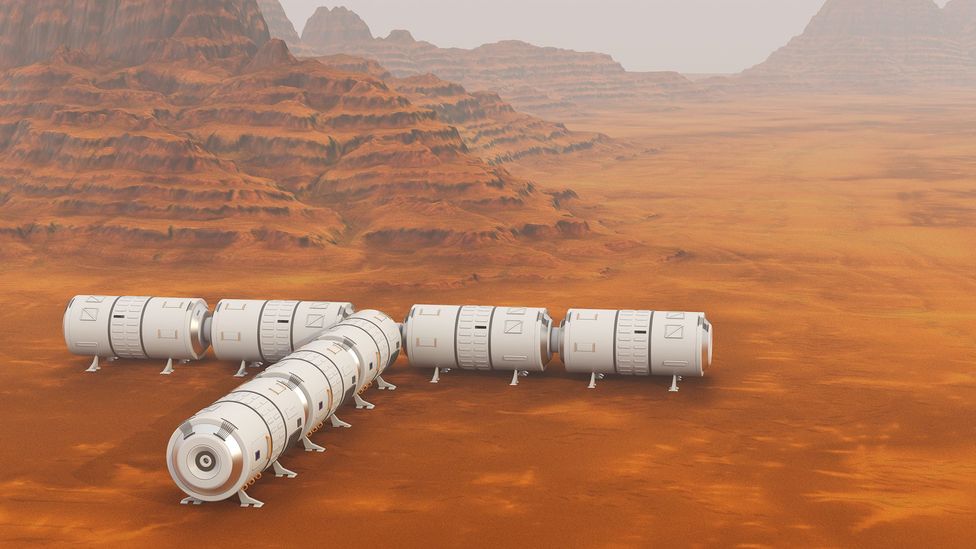 Building a colony on an asteroid would be far more challenging than building one on Mars (Credit: Getty Images)

Building a settlement on an asteroid appears to be technically feasible but carries with it significant engineering challenges. Instead, it is far more likely that asteroids could be mined remotely by automated systems and drones. An option to support this could be to build a base on Mars, which could be used for coordinating the asteroid mining systems.

“Both Mars and the Moon are more hospitable in terms of the gravity, as well as radiation shielding by using existing underground tunnels,” says Mack. There are already half a dozen satellites you can use for communications and the environment has been carefully studied.

There are some asteroids that travel in elliptical orbits around the Sun, with their path coming close to Earth and Mars. These could be hollowed out and used as a form of transport, while protecting astronauts from radiation and reducing the need for fuel. “We already know of a dozen or more asteroids that already would be easy to nudge into these orbits with anticipated technologies a few years from now,” says Elvis.

There is also a proposal to build a spaceport on Phobos, which is a moon of Mars, and is considered by some to have once been an asteroid. This spaceport could be used a stepping-off point for later settling on Mars.

Whilst planets are the preferred location for manned bases, due to their gravity and atmospheric protection, we could very well colonise an asteroid. However, they would not be particularly comfortable places to live. The benefits will have to far outweigh the daunting challenges.