From the road, it was hidden. A long tunnel, carved through the hillside in front, was the only way inside. This was not somewhere you could idly wander – it was the entrance to a military base.

The tunnel, nearly twice the length of a football field, is cooler than the air outside. Here and there, pools of water collect on the floor. A harmonious hum gets louder and louder as you reach the centre of the tunnel. Behind, the guard standing at the tunnel entrance is a silhouette against the bright light, the size of a toy soldier.

In total, you have to walk  656ft (198m) to reach the nondescript parking lot at the end. A grey institutional building looms above. This is Bunk’Art 1, and a few minutes’ walk up the path beside leads into one of the Cold War’s most secretive hideaways.

This is, Artemisa Muco says, the best place to be in Tirana on a summer’s day when the mercury is hitting 40°C.

Muco works as one of the guides at Bunk’Art 1. The 24-year-old cultural history graduate spends her days in a place so secretive it was known only as ‘Facility 0774’, an emotionless moniker for a structure built to survive the end of days.

Enver Hoxha was Albania’s ruler for four decades. From the close of World War Two until the mid-1980s, he ruled the country under a brand of Stalinist self-sufficiency designed to turn Albania into a modern independent country. It was a singular path – his zealous adherence to Marxist-Leninism allowed little deviation. Albania broke relations with Yugoslavia in 1948, the Soviet Union in 1961 and China in 1979, all because of a perceived dereliction of socialist duty. 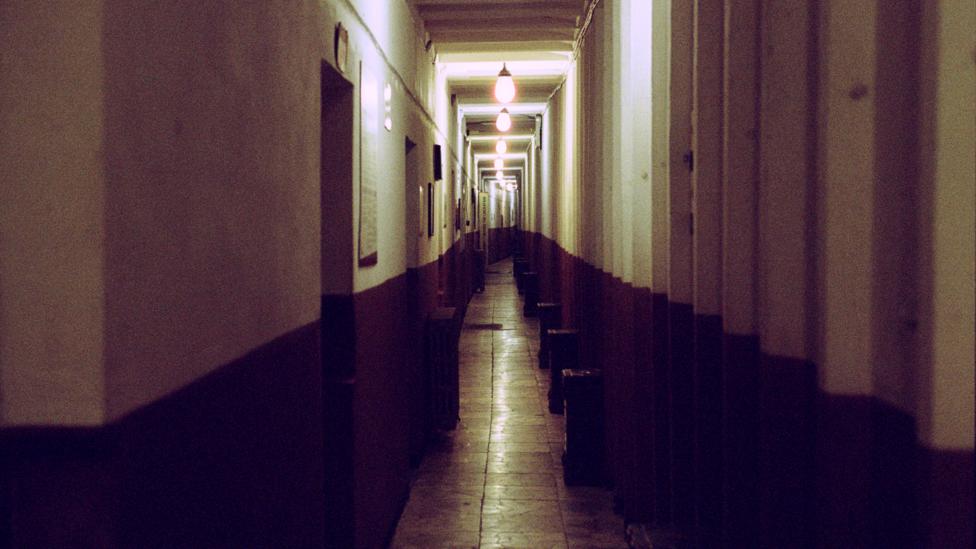 There are thought to be more than 300 rooms in the once-secret complex (Credit: Stephen Dowling)

With this Stalinist zeal came paranoia. Hoxha, a former partisan who had fought the Germans in World War Two, believed that enemies from both the East and West planned to invade this tiny mountainous country. He ordered an enormous programme of bunker-building, which would allow Albania’s citizens to fight a guerrilla war from a vast network of concrete pillboxes. And while the fighting raged, Hoxha, along with the rest of the ruling elite, would coordinate the resistance from this bunker.

Facility 0774 is the result of Hoxha’s singular paranoia. Built between 1972 and 1978, it boasts more than 300 rooms spread across five subterranean levels, much of it deep inside the foothills of the Mali I Dajtit mountains to the east of the Albanian capital. It is a windowless, claustrophobic memento of the Cold War in one of its most overlooked corners.

The bunker was constructed in complete secrecy

“There would have been enough food, water and fuel here for them to stay inside for a whole year,” says Muco.

The bunker was constructed in complete secrecy. On one wall is an image of Hoxha visiting on the day of its inauguration, one of only a few nights he would spend here before his death in 1985. Despite this, he had his own quarters, complete with a luxurious bed, a secretary’s office, and a bathroom fitted with a diesel-powered shower. The private chambers are decorated in what looks like some kind of dark wood. “It’s fibreboard,” says Muco. “All the rest of the rooms, like the prime minister’s, they are made of wood. This is the only room done this way.”

Albania transitioned from one-party rule to parliamentary elections in 1991, but the rest of the decade was marked by chaos – in 1997, the country’s government collapsed after the failure of Ponzi financial schemes, which had swallowed up much of the country’s wealth. Some 2,000 people were killed and many military bases were looted in the resulting mayhem. Facility 0774 was one of them. The bunker complex was last used by the Albanian military for drills in 1999, and then fell into disrepair. It was only in 2014 that it was reopened thanks to the efforts of Italian journalist Carlo Bollino, who wanted to bring this relic of Albania's isolated past into the spotlight.

“I decided to open Bunk'Art 1 in 2014, when the ministry of culture launched a call for ideas to celebrate Albania's 70 years of independence,” he tells BBC Future after our visit. “Until that time there was still no place where a tourist or even an Albanian could know the secrets of the communist period.”

He says he had a powerful reaction on his first visit. “I felt the thrill of exploring a dark, mysterious place that conveyed a sense of history.”

“The Albanian people only knew there’s this bunker we didn’t know about for so many years," says Muco.  "As you can see there are homes around here, even the people here around this area when they come here they’re like, ‘Wow’. It’s very impressive for them to see there’s such a building inside the mountain.”

Bollino has tried to build not just a museum – preserving the regime’s bolthole as if it were a time capsule – but to add something else. Several of the rooms have been turned into art installations, each of them displaying a different aspect of the country’s communist past, or riffing off the bunker’s austere surroundings.

The renovated rooms in this labyrinthine complex have been filled with the kind of furniture and fittings of the time. The team have now finished renovating more than 100 of the bunker’s rooms. Much of the rest of the complex remains unrenovated, or simply off-limits – a working army base is nearby, and the facility officially remains part of Albania's Ministry of Defence. 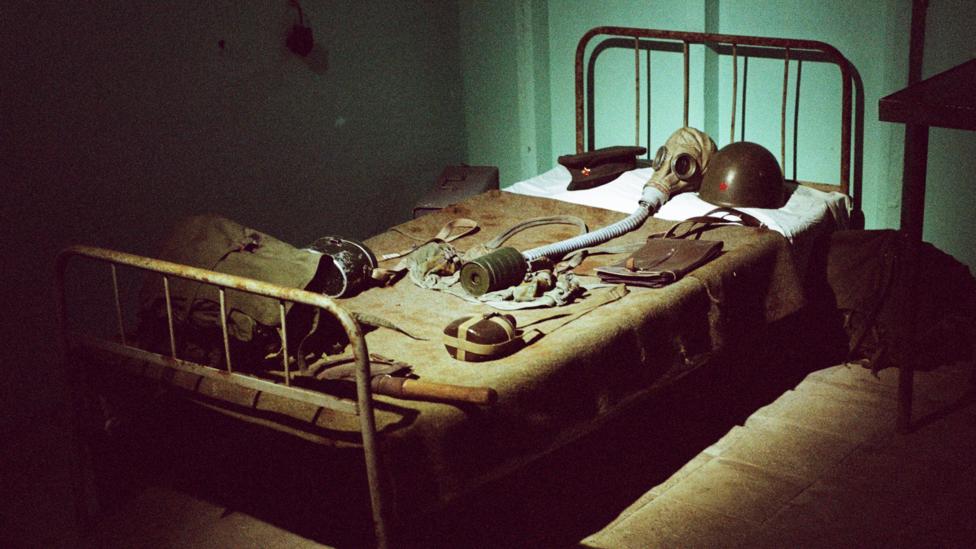 The curators have painstakingly filled the rooms with the kind of equipment that was used at the time (Credit: Stephen Dowling)

Bollino admits it has been a huge challenge. “It was difficult from a logistical point of view, because the place is very wet and any object exposed for a few days is assaulted by mould.

“But the greatest difficulties were cultural: recovering documents and objects from the communist past was very laborious, but even more difficult was the effort to overcome the prejudice towards a place in which I wanted to tell a terrible period in the history of the population. I struggled a lot to make it clear that remembering the facts of the communist period does not mean having nostalgia for communism.”

There are surreal touches. What look like wastepaper baskets adorned with red stars are in fact air purifiers, releasing oxygen to scrub the air of carbon dioxide build up. The distinctive Soviet-style gas masks – the kind that Albania had been supplied with when it was friendly with Moscow – dot the corridors, reminding visitors of the nightmarish escalation that would have led to this place becoming a temporary home to 300 people. 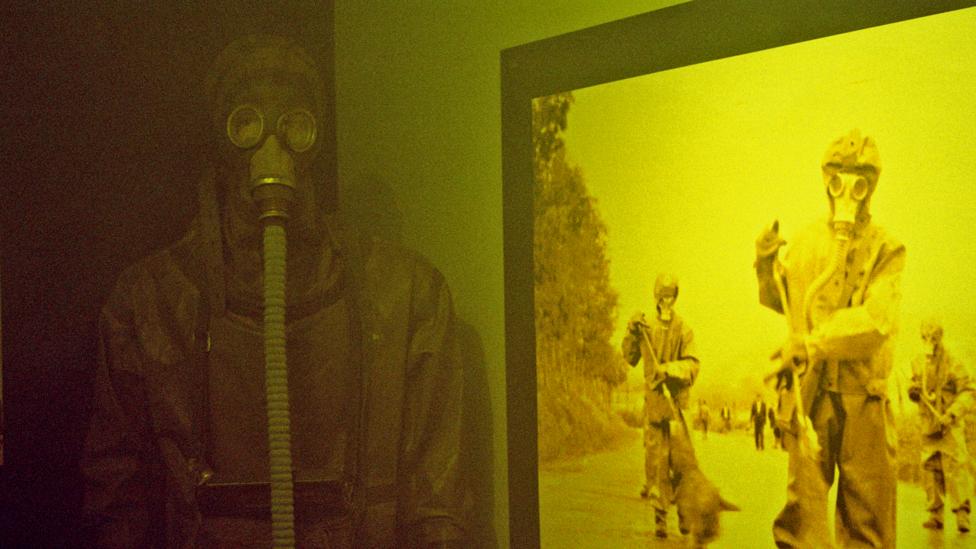 One of the rooms is dedicated to the measures that would have been taken in case of nuclear attack (Credit: Stephen Dowling)

The complex is confined, but not small. At its heart lies an assembly hall big enough for hundreds of people. From here, Hoxha and the regime’s elite would have read speeches to those locked inside this nuclear-proof bolthole. It has now become a theatre and concert space – there’s a small bar on the way in – that’s already played host to rock and jazz concerts. There’s a touch of poetic irony; both forms of music were banned under Hoxha’s rule.

Further concerts are just one of the plans for the facility, which is rapidly becoming one of the most popular tourist attractions in Albania. Bollino says he has other plans too.

Muco says that Bunk’Art has tried to remain as politically neutral as possible, without shying away from the facts of Albania’s communist isolation

“My next project concerns one of the south corridors of Bunk'Art 1, in which I want to set up a photographic exhibition with scenes of daily life, always referring to the communist period. It will be an opportunity to introduce visitors to another part of the country that has now disappeared.

“In September I will try a form of immersive theatre: I will revive characters from the past in the corridors of Bunk'Art and visitors can meet and interact with them. It is a first step towards a much more ambitious project concerning an installation based on virtual reality.” 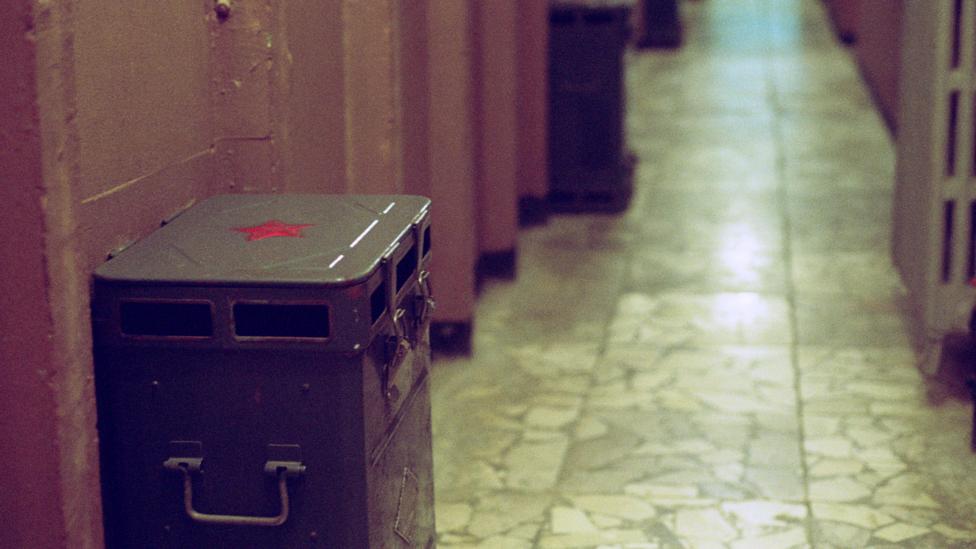 The bunker corridors are littered with special air purifiers which would have kept the air clean (Credit: Stephen Dowling)

In the meantime, Bunk’Art is becoming a reason to visit Tirana. Senada Murati, one of the team running the complex, says they have started to receive much more interest from visitors from the UK and the US, and even as far afield as New Zealand.

Muco says that Bunk’Art has tried to remain as politically neutral as possible, without shying away from the facts of Albania’s communist isolation. Hoxha’s 40-year rule is believed to have led to nearly 5,500 executions and more than 25,000 imprisonments. Albanian citizens could be shot on sight if they were caught trying to scale the fences that sealed the country’s borders.

“I think the museum has to be really sensitive,” she says. “We present here the bright side and the dark side of communism, so people can decide.

“Some visitors, they come with a picture of Hoxha in their pocket.”