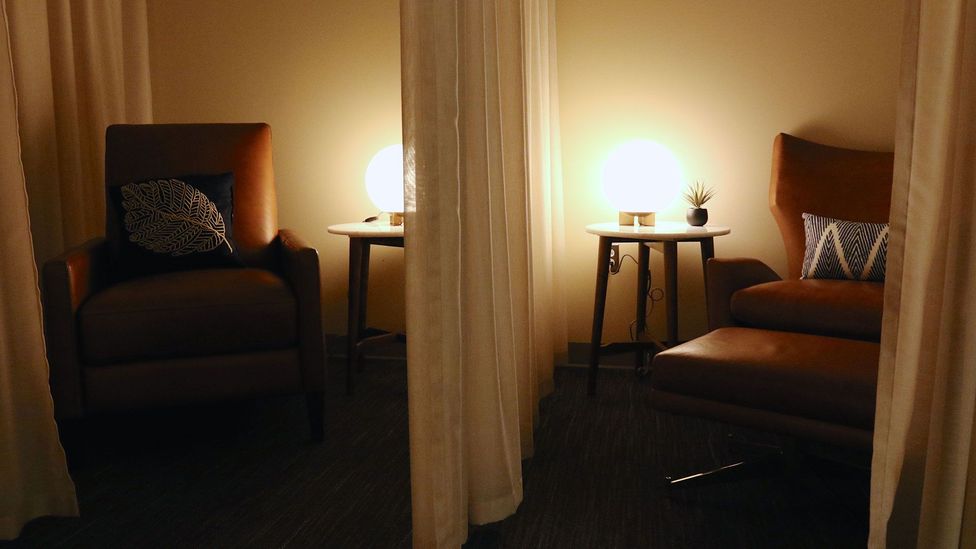 By Tessa Love 14th August 2018
The alarms, beeps and chatter of a hospital aren’t just uncomfortable for patients and staff: the noise can undermine safety and health. One entrepreneur is on a mission to change this
Y

Yoko Sen’s livelihood rests on her sensitive ears. As an ambient electronic musician, being hyper-tuned to sound is her greatest asset. But when she became ill five years ago and spent much of her time in and out of hospital, this power became a liability: surrounded by machines, the endless alarms and beeps became a dissonant and disruptive cacophony that wore her down.

“I was pretty disturbed by the noise, in particular those beeps and alarms,” Sen said. “But also the overhead speakers, people talking and screaming, doors getting slammed. It's just a really loud, hectic sound environment. And I think that really stayed with me.”

When she was out of the hospital, she began to wonder: is all this beeping and slamming negatively affecting patient health? And what could she do about it? These questions inspired her start-up Sen Sound. She investigated them further while an artist-in-residence at Sibley Innovation Hub, an innovation team embedded in Washington DC’s Sibley Memorial Hospital.

You might also like:
• How bacteria can save children’s lives
• 12 words shaping the future
• How we’ll fight the end of antibiotics

She originally wanted to change the abrasive tones of monitor alarms to help patients. But she has since expanded her mission to relieve hospital staff, as well. After all, for patients, hospital noise can be vexing and lead to loss of sleep, which can lead to slower healing. But even more worryingly, hospital staff immersed in a perpetual sea of noise can develop ‘alarm fatigue’ – desensitisation to beeping due to oversaturation of sound. Potentially important beeps and signals consequently get lost in the clamour, and that can be dangerous.

“By taking care of the people who care for other people, we can affect the system in a better way,” Sen says. “Oftentimes the experience of staff members gets overlooked. But the fastest way and most effective way to affect patient experience is really to improve the experience of nurses and doctors.” 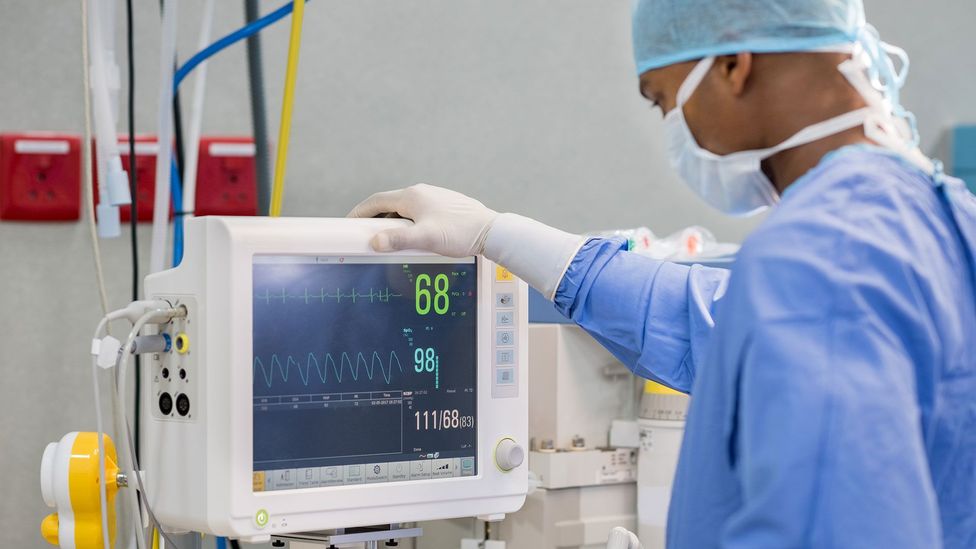 Doctors can develop 'alarm fatigue' meaning that they fail to notice when a patient is in danger (Credit: Getty Images)

Though sound has largely been ignored in the healthcare industry, several studies have highlighted just how widespread and chronic the issue is. One report by the American Association of Critical-Care Nurses found that from 72% to 99% of all hospital alarms were false. At just one hospital – Johns Hopkins Hospital in Baltimore, Maryland – there is an average of 350 alarms per patient per day.

A global study by the Mayo Clinic found that hospitals had grown increasingly noisy over the past 50 years, with daytime noise levels rising from 57 decibels to 72 and night-time levels from 42 to 60. According to the World Health Organization, night-time noise levels shouldn’t exceed 30 decibels, and exceeding 55 can disturb sleep and increase the risk of heart disease. Another study specifically looked at alarms that signalled arrhythmia (an irregular heartbeat) and found that nearly 90% were false.

“Imagine a neighbour who has a hair trigger car alarm that goes off all the time,” the report reads. “If someone actually breaks into this car, setting off yet another alarm, would anyone be likely to call the police?”

Probably not. Between 2005 and 2010, at least 216 deaths across the US were linked to unheard or otherwise dysfunctional alarms. If anything, this number could be low – alarm-related deaths often go unreported. And while the responsibility for these deaths officially lies with the hospital staff, the root of the issue is largely out of their hands.

“Nurses just start to assimilate that noise. It just becomes ‘beep beep, beep beep’,” says Michele Pelter, assistant professor at UCSF’s School of Nursing and co-author of the study on alarms and arrhythmia. “We also know that nurses are turning the volume down for their own sanity and for their patients and their families.

“In extreme cases, nurses have even totally turned off the alarm.”

This isn’t without reason. Though the auditory neurons in our brains stop firing when a sound or sound pattern is repeated – creating a phenomenon known as auditory selective attention – that doesn’t mean the damage of noise pollution isn’t filtering in anyway, according to a study published in the European Journal of Neuroscience. Exposure to high- and low-level sustained sounds has been shown to cause problems as wide-ranging as loss of sleep and trouble concentrating to more serious issues such as diabetes, depression, and birth complications, according to Science X.

To find solutions, Sen worked with academic researchers in psychoacoustics and critical alarm design to craft sounds that are more harmonious – without diminishing the sense of urgency current alarms create. The result is a set of sounds she helped device company Medtronic to design and which will soon be released to market. 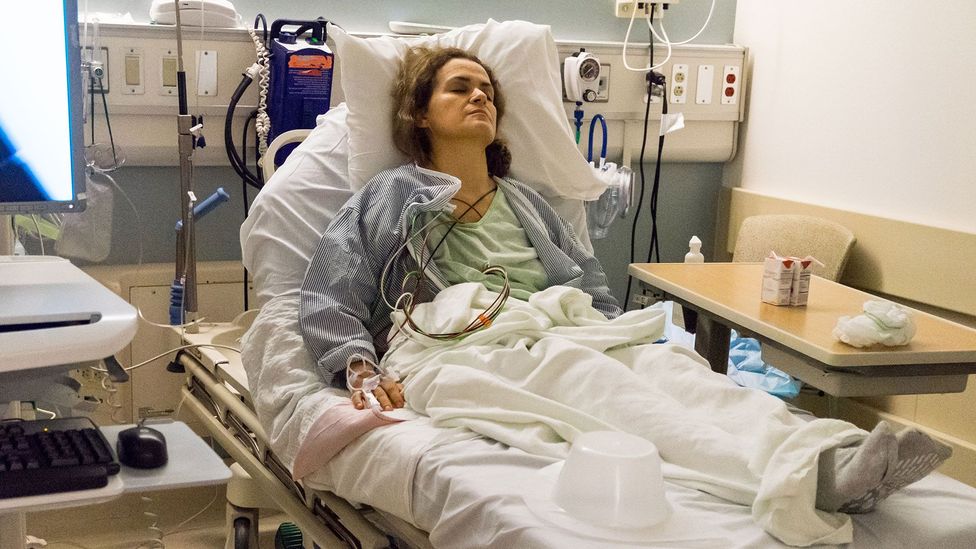 Noise in hospitals can also be a source of stress for patients, which may harm their chances of a quick recovery (Credit: Getty Images)

Sen is also working with a non-profit to create another set of tones specifically for paediatric care units, which would be designed by children themselves. The reason for this is twofold: the negative effects of sound pollution have been shown to impact children at higher rates than adults and, according to Sen, the act of having kids create the sounds can act as a necessary bridge between stakeholders in the process of changing these long-held institutions.

“It's really hard for people to talk to each other. If it's sounds designed by kids, I think people might be willing to come together and listen,” says Sen. “And that’s really the pain point that we can contribute to.”

Another idea Sen’s team has come up with is the “Tranquillity Room” – a space with dim lighting, comfortable chairs, aromatherapy, and an ambient soundtrack composed by Sen. More than just a space to relax, the Tranquillity Room is about changing the culture of hospitals.

The strategy should prove to be more effective than previous attempts at cultural change, such as posters reading “Shhh” (something that adds to the “visual noise” of the hospital, as Sen puts it). The important aspect isn’t just the space itself, Sen and others say, but introducing the idea that staff members can prioritise having brief respites to clear their minds (and ears).

“It's heavy-protected time for nurses and frontline caregivers to have a place to decompress,” says Nick Dawson, former executive director of the Sibley Innovation Hub, who worked closely with Sen to create the room.

Prototyped at Sibley Memorial Hospital, which is affiliated with Baltimore's Johns Hopkins Medicine, the room was found not only to rejuvenate the staff, but to improve patient experience and quality of medical care. Based on data collected from staff feedback, the Tranquillity Room reduced stress, improved their ability for patient care, and even enhanced patient safety due to the space’s calming nature. As a result, Sibley decided to make it a permanent fixture. Sen is in talks with several other hospitals across the country to implement the idea as well.

It may seem surprising that someone untrained in hospital management or medicine is trying to change hospitals. But it’s partly this outside perspective that has made Sen’s work so impactful, says Dawson. “Yoko literally hears the world differently and had a very strong artistic point of view about the problem – that the environment was not just unpleasant, that it was hostile and causing harm,” he says.

“I think in healthcare, that's a particular frame of mind that resonates. We're not always good at knowing what causes harm, but when something is pointed out as causing harm, that's so far from what healthcare is supposed to do that people will respond.”

Other researchers are examining the issue of noise and alarm fatigue in hospitals as well. In 2014, the US Joint Commission made alarm safety a national patient safety goal, requiring hospitals to make alarm management a priority among staff.

But as Pelter puts it, the solution to this issue cannot rest with nurses alone.

“This is going to be something we have to solve with industry, that they're going to have to help us with,” she says.

That, of course, is the goal of Sen Sound: that by working creatively within the industry, the hospital of the future may be more harmonious.

Correction: A previous version of this story said that the sounds Sen developed with Medtronic are open-source. This is incorrect. A previous version also implied that Sen came up with the idea for her start-up while at Sibley Innovation Hub; however, she had already founded the company and developed its ideas further while at the hub. We regret the error.

Future Now
1The 'invisible allies' inside the body
Future Now
2The sarcophagus that encases Chernobyl
Future Now
3Are we running out of land?
future
4Can you read at superhuman speeds?
Around the BBC