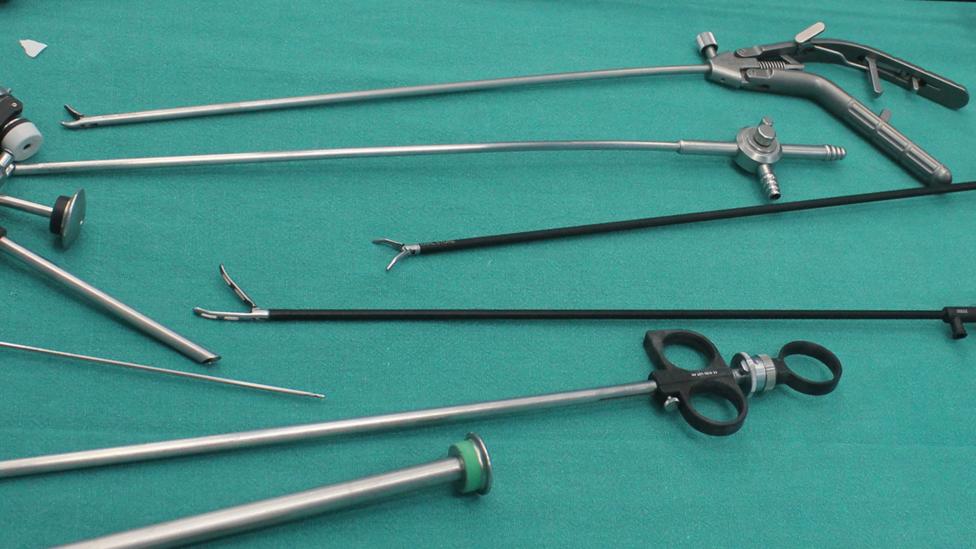 By Hannah Harris Green 11th September 2018
In India, women have died getting sterilised – but it remains the most popular contraceptive method both there, and overall worldwide. Why is it so popular? And what are the drawbacks?

Raji Kevat of Ganiyari, Chhattisgarh, has mixed feelings about tubal ligation, the most common form of female sterilisation. It is an operation that she has undergone herself. After she received the procedure in 2014 at one of the Indian government’s now-infamous sterilisation ‘camps’, she advised her sister-in-law, Shiv Kumari Kevat, to do the same.

Shiv Kumari and 82 other women lined up in an otherwise abandoned hospital in the city of Bilaspur in November 2014. The surgeon cut the women with a single instrument, allegedly without changing his gloves between each surgery. The women were then laid on the hospital floor to recover.

That night, Shiv Kumari began vomiting and experiencing terrible pain in her gut. She was dead within days. While the government’s official explanation was that the deaths happened due to compromised drugs, a post-mortem report showed that Shiv Kumari had passed away due to septicaemia – likely from surgical infection. She was one of 13 women who died from the camp. 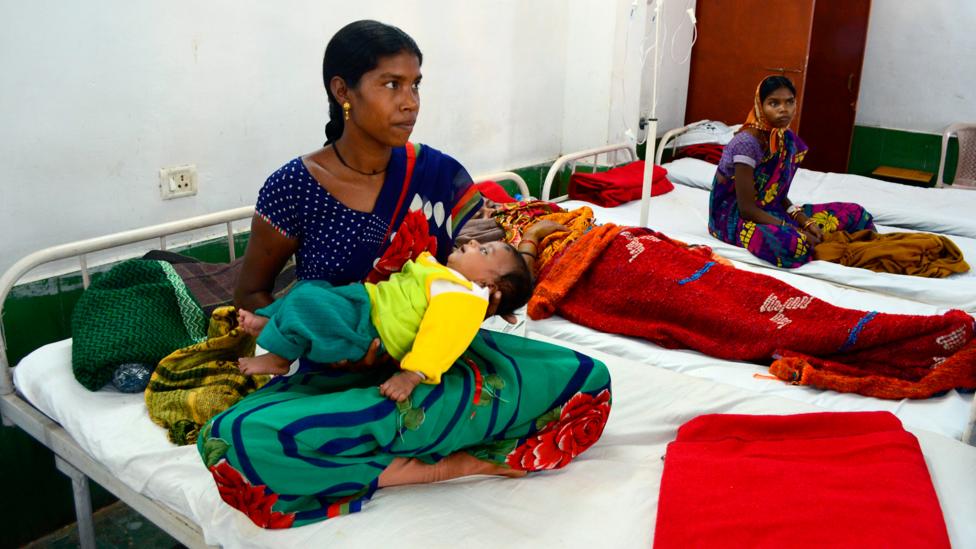 One of the women who suffered complications during the 2014 mass sterilisation that killed 13 women, Anita Bai tends to her child while under care in hospital (Credit: Getty)

Still, says Raji, if anyone asked her, she would advise them to get the procedure, even after losing a family member. Her reason is simple.

“If you don’t, your family will get too big,” she says.

Like many women around the world, Raji considers sterilisation the only real contraceptive option.

You might also like these other stories in the Health Gap:
• The strange truth about the pill
• The birth control women don’t know
• The dark side of the pill

If you look at the world as a whole, female sterilisation is the most popular form of contraception. While the pill tends to be more common in Western Europe, Canada or Australia, for example, sterilisation is often the main choice for women elsewhere, including much of Asia and Latin America. According to a 2015 UN survey, the most recent available, an average of 19% of married or in-union women relied on female sterilisation globally – the next most popular method, the IUD, is less than 14%, while the pill is just 9%.

Government sterilisation programmes began in the United States. In 1907, the state of Indiana passed a law requiring institutionalised persons to be sterilised – the world’s first eugenics law. 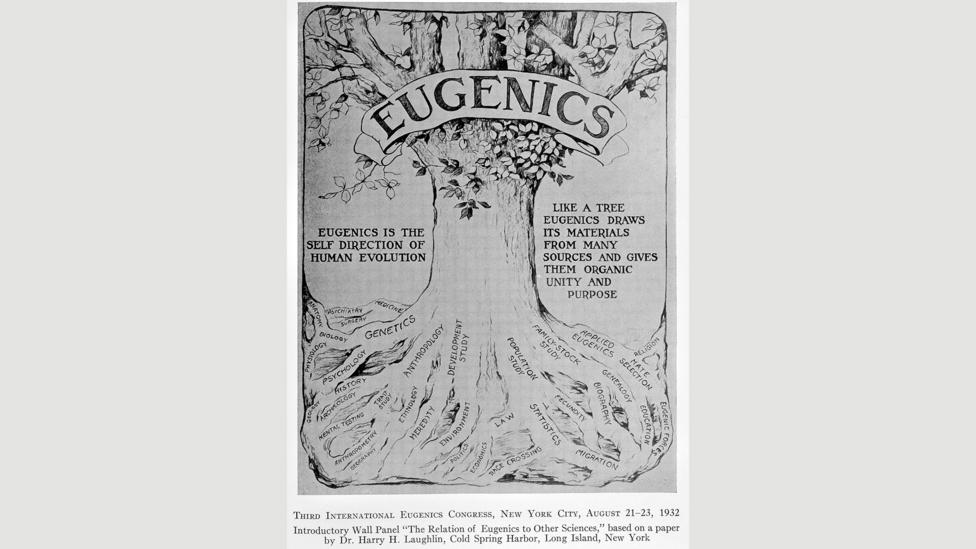 The world’s first eugenics law was passed in Indiana in 1907, when the state required that institutionalised people be sterilised (Credit: Wellcome Collection)

Many other US states passed similar laws. Nazis would later use California’s racist eugenics programme as precedent for sterilising Jewish people. Eugenics laws in the US would mostly be overturned by the 1970s, but they overlapped with the rise of the pill, feminism and the sexual revolution. And it was during this time that governments of recently colonised countries, including the Philippines and Bangladesh as well as India, would also begin to sterilise their populations, with international support. Peru and China also received foreign aid for their sterilisation programmes.

But today, India is the country where the most sterilisations are performed in the world, in terms of both absolute numbers and percentage of the population.

These high numbers might be partially explained by India’s history as the world’s first country to have a department devoted to family planning, which emphasised sterilisation early on. The Indian government began aggressively promoting sterilisation in the 1970s, and a number of international organisations and governments were happy to provide support, including the World Bank, the US government and the Ford Foundation. 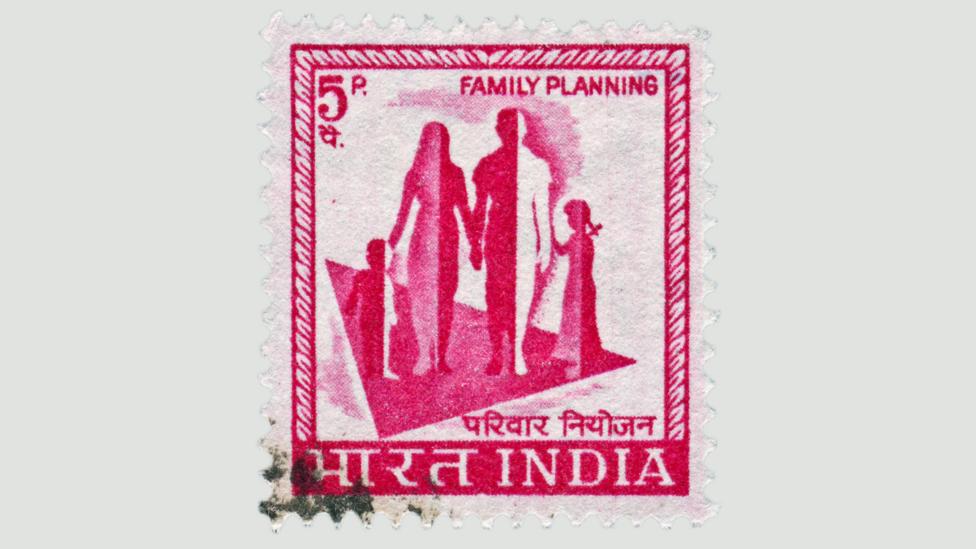 In a 1977 interview with the St Louis Dispatch, RT Ravenholt, director of the US Office of Population, said that the government’s goal was to sterilise a quarter of the world’s fertile women – around 100 million. His argument was that since US medical advances were responsible for the expansion of the world’s population, they should also be responsible for keeping it down… albeit through women’s bodies, rather than men’s.

Today, USAID, the arm of the US government that provides funding for family planning services around the world, continues to support some of this thinking: a USAID-funded white paper in 2014 recommended that sterilisation increase globally.

After a forcible male sterilisation campaign when more than six million low-income men were sterilised and 2,000 died, the Indian government began to change its official approach to family planning.

Even so, sterilisation isn’t only popular in India – it’s on the rise. According to UN Statistics, globally the proportion of married or in-union women who have been sterilised has decreased from 20.5% to 19% over a decade – but in India it has risen from 34% to 39%. Government sterilisation camps, meanwhile, continued until 2016. 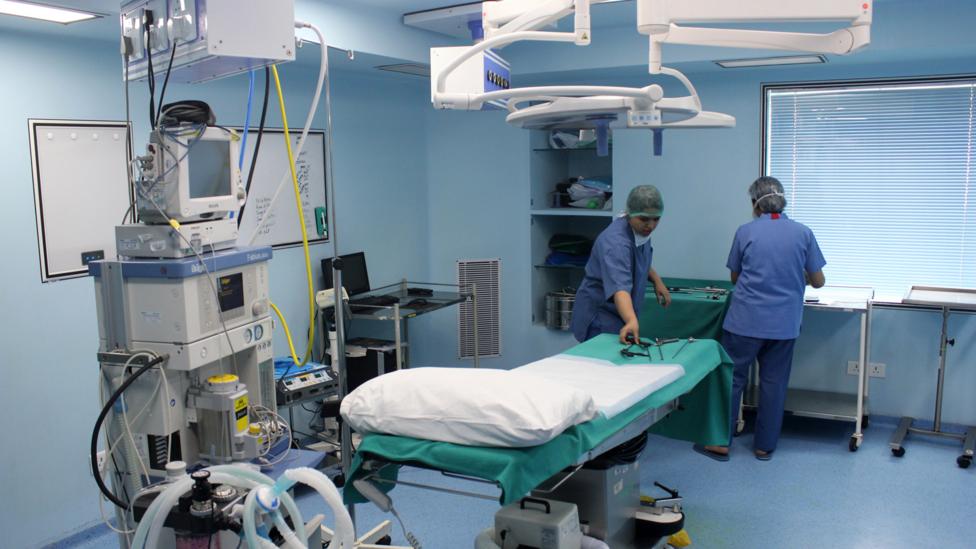 The irreversibility of sterilisation also means that one cannot fairly compare its popularity with that of other methods. Most studies, including the UN survey, count how many women are currently using a type of contraception. While women can, and do, choose to discontinue other methods at any time, once their contraceptive method is sterilisation, that rarely changes: tubal ligation reversal is both costly and likely to fail.

Still, that makes the difference between the numbers of sterilised women globally, versus in India, all the more marked.

For women around the world who know they don’t want children or for mothers who have reached their desired number of children, sterilisation is often a safe and effective option. In the US, for example, many new mothers opt for sterilisation right after childbirth, and other women will switch from spacing methods (like condoms or the pill) to sterilisation once they’ve completed their family.

The upside is that these women never have to think about contraceptive methods again. They’re also unlikely to have side effects once they’ve recovered from the procedure.

But sometimes, as in Chhattisgarh, women received the sterilisation procedure without fully understanding its significance – and in unsafe conditions. What happened in Bilaspur “was a tragedy waiting to happen”, says Yogesh Jain, director of Jan Swasthya Sahyog hospital in Ganiyari, near Shiv Kumari’s home. He considers the deaths an inevitable result of policy choices that devalue poor women. “I could have written about this 10 years ago that something's going to happen,” he says, adding that the women were treated as no more valuable than “a uterus and a pair of hands”. 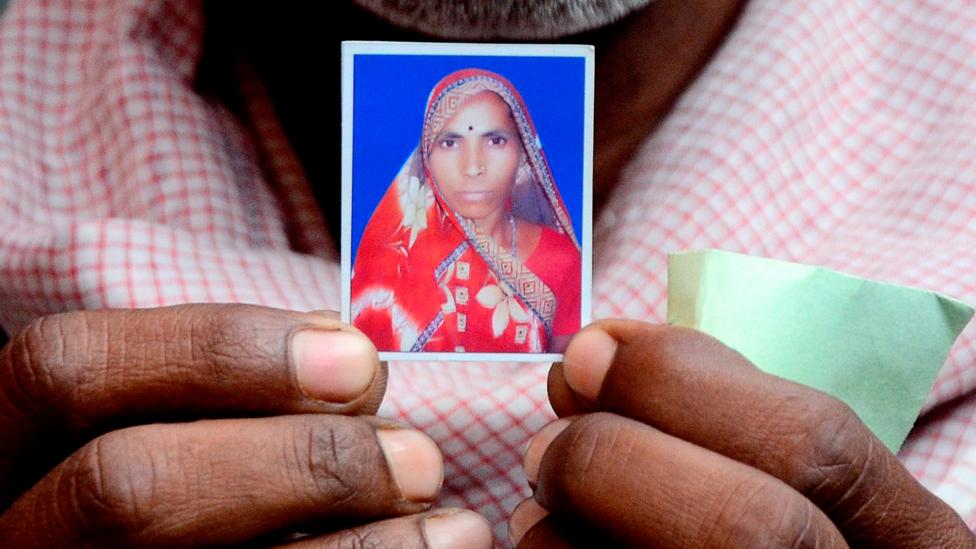 Roop Chand Srivastava holds an image of his wife Phool Bai, who died during the November 2014 mass sterilisation in Bilaspur (Credit: Getty)

In an investigation of the sterilisation camp deaths in Chhattisgarh, the Population Foundation of India (PFI) found that the state government spent about 20 times the amount incentivising women to get the procedure as they spent on the procedure itself – and women were only paid between 600 and 1400 rupees each (£7-15) to get sterilised. But because of the 2014 tragedy, the national government “did wake up to the fact that there is abysmal quality of care in these facilities”, says PFI director of programmes Sonal Sharma. She says the Indian government accepted PFI’s recommendation that the ‘camp’ approach to sterilisation be banned.

The government has shifted the focus instead to ‘fixed day’ services, meaning that women must come to particular facilities on particular days of the week if they want to be sterilised – which allows better monitoring and regulation of operating room conditions. But in some places, the more limited hours are proving inadequate to service demand for the procedure. At the Mungeli district level hospital about 50km from Bilaspur, for example, a surgeon now comes in to do the procedure two days each week. But that only adds up to about 20 surgeries – which, says the district’s chief medical officer Mukhya Chikitsa, isn’t enough for all the women who want it.

If sterilisation remains in such high demand even among women in Chhattisgarh despite its now-tainted history there, many women must still see it as their best option.

But the procedure remains controversial – and not only because of preventable deaths like those in Bilaspur.

Even when performed correctly and in hygienic circumstances, tubal ligation remains more risky and invasive than vasectomy. Even so, in the majority of countries, female sterilisation is more popular than male sterilisation. 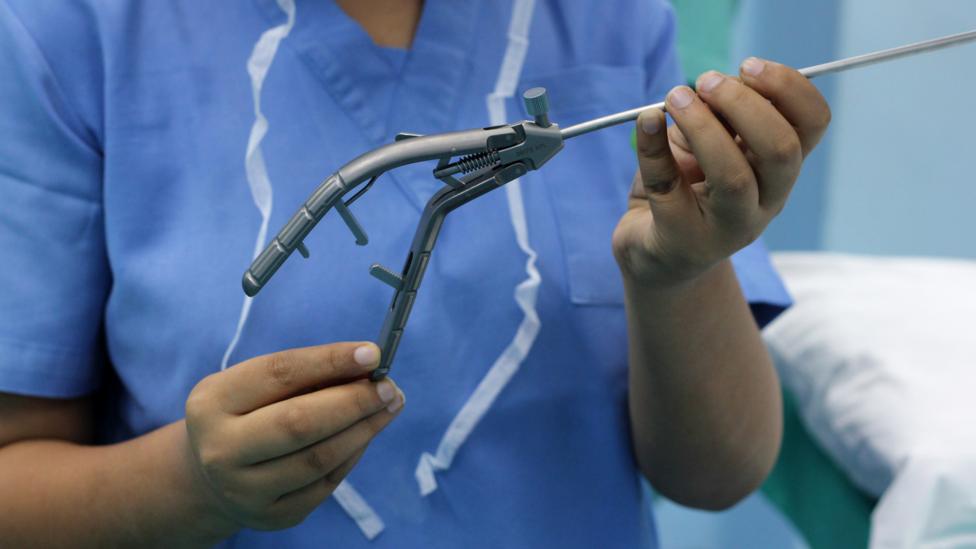 Even when performed in hygienic conditions, tubal ligation remains riskier than vasectomy – but in India and other countries is the far more common choice (Credit: Shahid Tantray)

The nature of tubal ligation also gives rise to ethical concerns: compared with other types of contraceptives, it is easier to implement without a woman’s full consent or understanding. A woman must follow instructions to use methods like the condom or the pill. But once a woman is sterilised, her participation in controlling her fertility is over. Governments have abused this. In Peru in the late 1990s, for example, public medics would sterilise poor women without telling them, instead claiming to be performing a different procedure like injecting vitamins intravenously.

Most women who get sterilised in India never use another contraceptive method first to help space out pregnancies, which comes with significant health risks

One other difficulty is that the emphasis on, and popularity of, sterilisation can encourage women not to use other methods. Most women who get sterilised in India use only this contraceptive method in their lifetime. In other words, they never use something like an intrauterine device (IUD), patch or pill first to help space out pregnancies. This comes with significant health risks: not spacing out pregnancies means that both the women and their children face an increased risk of death and other complications.

This goes hand in hand with the fact that other contraceptive methods, like the pill or IUD, are less available in the country, as are trained professionals who can insert IUDs. And across social classes, women tend to lack knowledge about other methods. 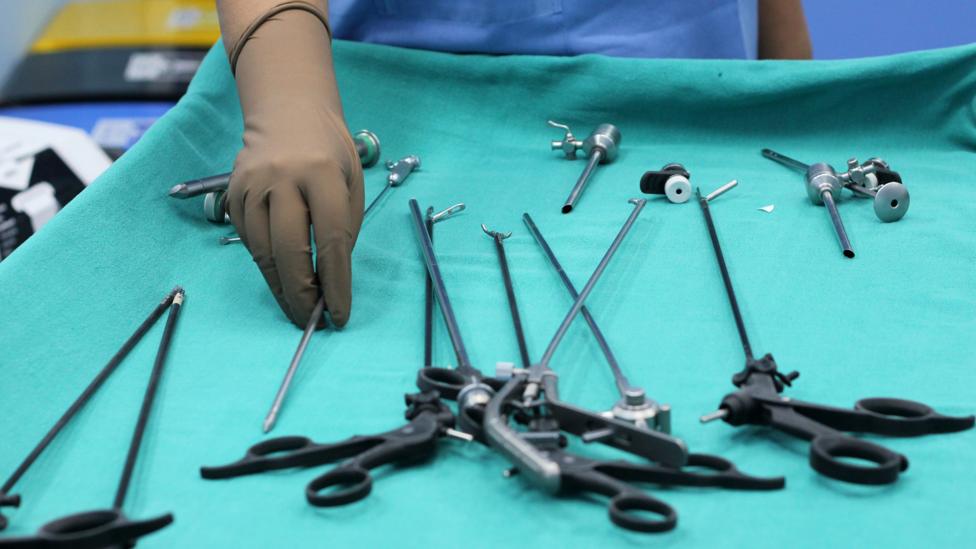 Most women who get sterilised in India have never previously used another contraceptive method (Credit: Shahid Tantray)

Madhu Goel is a gynaecologist at Fortis La Femme, a high-end private hospital for women in Delhi’s Greater Kailash neighbourhood. Even among her patients, sterilisation is still “the method” of contraception, she says. Though that’s especially true of older women, younger patients also have misgivings about alternatives. Even most young women who spoke with her after researching contraception on the internet had misconceptions about the pill – believing that it causes permanent infertility, for example.

But Goel says that, at least among her patients, social change in India means that more women are educating themselves about other options. Divorce rates in India are going up, for example. As a result more women want to reverse their sterilisations, hoping to start new families with their second husbands.

Policy may eventually have an effect, too. The National Policy for Women laid out by the ministry of Women and Child Development in 2016 outlines a shift focus from female to male sterilisation. But according to experts, this policy has yet to be put into practice.

Given the international machine that has made female sterilisation so popular in India, it might take time to make a real dent in its dominance.

This story was reported with support by the Pulitzer Center for Crisis Reporting.

This story is part of the Health Gap, a special series about how men and women experience the medical system – and their own health – in starkly different ways.

Do you have an experience to share? Or are you just interested in sharing information about women's health and wellbeing? Join our Facebook group Future Woman and be a part of the conversation about the day-to-day issues that affect women’s lives.