Good manners really do ‘cost nothing and buy everything’, even in today's increasingly polarised politics.

Whatever your political affiliations, it would seem difficult to deny that politics has become less civil over the last decade. Perhaps it’s thanks to social media, which gives us more direct access to the thoughts of the people in power, but never before has a sitting US President so regularly described opponents as being “crooked”, “crazy”, “psycho” or a “phoney”.

Do these kinds of personal insults hinder a politician’s standing in the public? Or do they simply signal a dominant personality and commitment to their goals – strengthening their support base? Take the Kavanaugh hearing, which only emphasised the deep political divides afflicting countries such as the US. After the then-nominee to the US Supreme Court gave testimony described as an angry “call to arms” and which he later characterised himself as “sharp” and “very emotional”, Gallup polls found that there was no change in the percentage of Americans who were for versus against his confirmation. But there was a dramatic drop in the number of people who formerly had been undecided.

Kavanaugh was confirmed to the Supreme Court a little more than a week later. It’s possible that in this kind of climate, it no longer pays to pull your punches.

Frimer and Skitka examined two hypotheses. The first is named the “Montagu Principle”, after the 18th-Century English aristocrat Lady Mary Wortley Montagu, who famously argued that “civility costs nothing and buys everything”. According to the Montagu Principle, rudeness should only harm a politician’s ratings.

As an alternative, the researchers proposed the “red meat hypothesis”, in which they liken a personal insult to “throwing red meat to your supporters”. According to the red meat hypothesis, your supporters might see uncivil comments as honest, authentic criticisms that speak to their own feelings. Particularly in today’s heightened political polarisation, this may appeal to diehard fans’ distrust of their political opponents.

Frimer and Skitka conducted a series of experiments, including analyses of the influence of Donald Trump’s tweets on public opinion surveys and online questionnaires that more specifically probed participants’ responses to Trump’s statements – such as his attack on two TV journalists, “low IQ crazy Mika” Brzezinski, who was “bleeding badly from a facelift”, and her partner, "Psycho Joe" Scarborough.

The researchers found that the nastier Trump’s language was, the lower the participants' approval of him. And in the instances when he showed respect and restraint, his ratings rose. 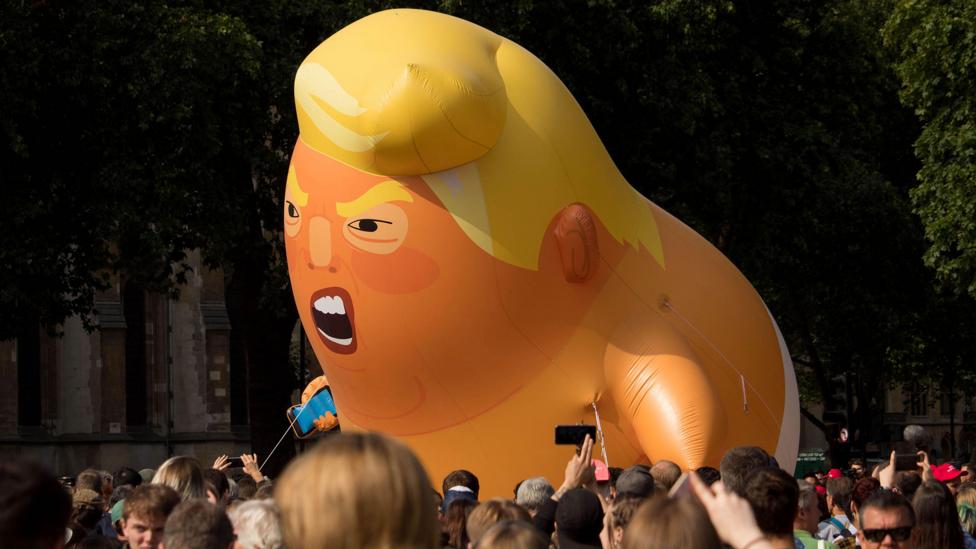 Political protests often resort to personal insults, but many people from across the political spectrum find such incivility to be alienating (Credit: Alamy)

Crucially – and this is the really important point – the Montagu principle held even among Trump's own supporters, while there was no evidence for the red meat hypothesis. The researchers found that it also held true when Trump was responding with a “counterpunch” to personal criticism of himself – a situation where he might appear to be more justified to respond in kind.

Overall, it seems the public prefer politicians to make no response to an insult, rather than to react spitefully themselves.

To make sure that this was a general effect and not simply shaped by their existing expectations, Frimer and Skitka broadened their analysis to examine participants’ reactions to statements of fictitious politicians from across the political divide. Once again, the Montagu Principle predicted their reactions, irrespective of the participants’ own political affiliations.

Frimer and Skitka also performed textual analyses to measure civility in the transcripts of congressional debates between 1990 and 2015, and examined public approval of Congress over the same period. It’s worth noting that here, they were examining the Congress as one body, rather than the contributions of individual politicians – but they still saw a similar effect. The less civil the debates, the less the public approved of Congress’s handling of various issues. In other words, rudeness reduced trust in the whole political process.

The researchers conclude that good manners can still “buy everything and cost nothing" – as Lady Montagu had asserted – and politicians campaigning in the US mid-term elections would do well to take note.

David Robson is a senior journalist at BBC Future. He is d_a_robson on Twitter.