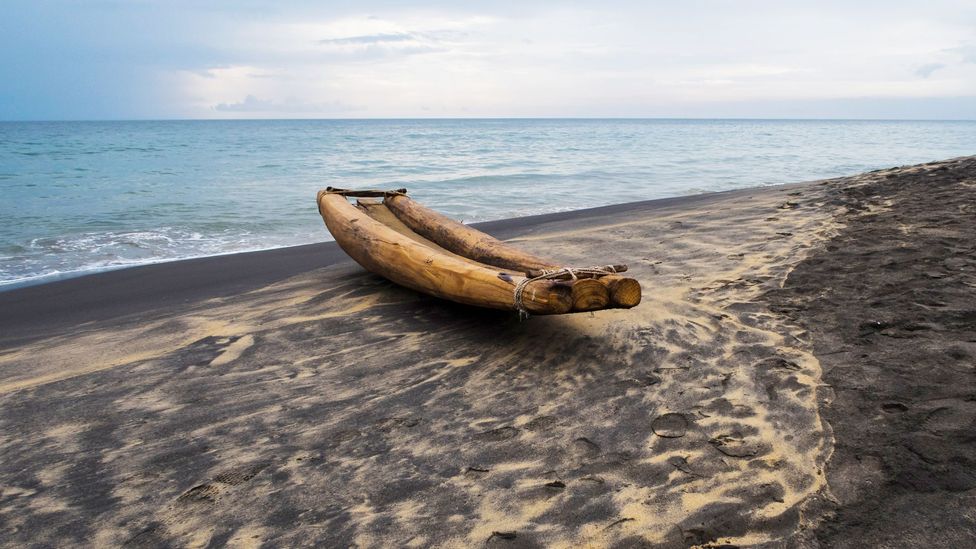 By Edd Gent 18th October 2018
For decades, India has planned to fuel a carbon-free future with its thorium-rich sands. Is the country any closer to reaching its goals?
T

The tropical beaches of India probably bring to mind sun-dappled palms, fiery fish curries and dreadlocked backpackers, but they also hold a surprising secret. Their sands are rich in thorium – often hailed as a cleaner, safer alternative to conventional nuclear fuels.

The country has long been eager to exploit its estimated 300,000 to 850,000 tonnes of thorium – quite probably the world’s largest reserves – but progress has been slow.  Their effort is coming back into focus amid renewed interest in the technology. Last year Dutch scientists fired up the first new experimental thorium reactor in decades, start-ups are promoting the technology in the West and last year China pledged to spend $3.3bn to develop reactors that could eventually run on thorium.

Proponents say it promises carbon-free power with less dangerous waste, lower risk of meltdowns and a much harder route to weaponisation than conventional nuclear. But rapid advances in renewables, a costly development path and question marks over how safe and clean future plants would really be mean its journey to commercialisation looks uncertain.

You may also enjoy reading:

India’s pursuit of thorium is driven by unique historical and geographic conditions, which have given it considerable staying power. Some see a quixotic quest unlikely to live up to its promise, but the country’s nuclear scientists see a long-term strategy for carbon-free energy security in a country whose population could peak at 1.7 billion in 2060.

“We are a power hungry nation,” says Srikumar Banerjee, secretary of India’s Department of Atomic Energy (DAE) until 2012. “Eventually we need to rely on indigenous raw materials for the long-term sustainability of a country which is going to support one fifth of humanity.” 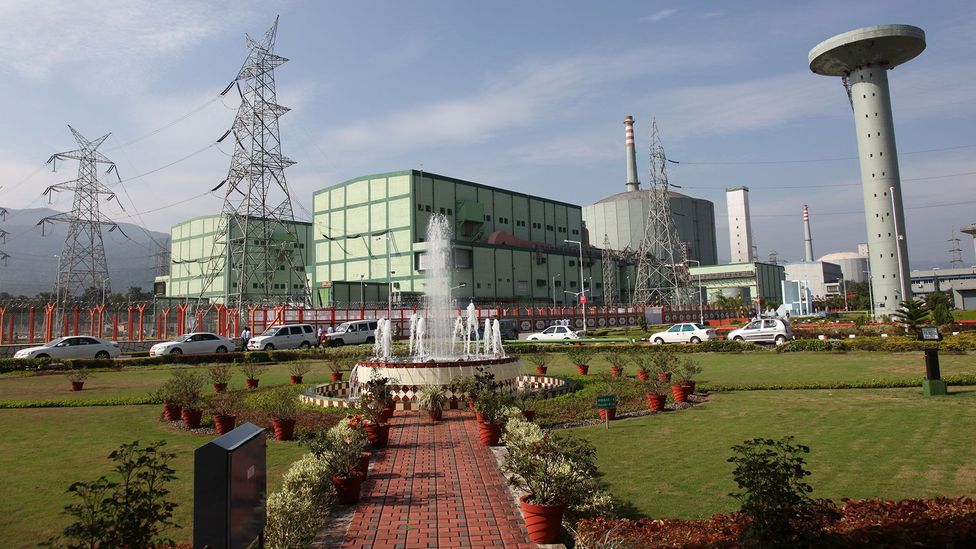 Today all commercial nuclear plants run on uranium, a fact at least partly down to geopolitics. The West’s development of nuclear energy was inextricably linked to the development of atomic bombs and uranium’s by-products are much easier to weaponise. “In a different era maybe a different choice would be made and we'd have headed down the thorium route in the 1950s instead, but we are we are where we are,” says Geoff Parks, a nuclear engineer at Cambridge University.

India’s strategy was governed by different calculus. The country’s meagre uranium deposits convinced the founding father of its nuclear programme, Homi Bhabha, that any long-term strategy must exploit thorium, its most abundant fuel, which inspired a three-stage programme that is still the central plank of India’s nuclear energy policy.

Thorium doesn’t spontaneously undergo fission – when an atom’s nucleus splits and releases energy that can generate electricity. Left to its own devices it decays very slowly, giving off alpha radiation that can’t even penetrate human skin, so holidaymakers don’t need to worry about sunbathing on thorium-rich beaches.

To turn it into nuclear fuel, it needs to be combined with a fissile material like plutonium, which releases neutrons as it undergoes fission. These are captured by thorium atoms, converting them into a fissile isotope of uranium called U233. An isotype is a variant of an element with a different number of neutrons. 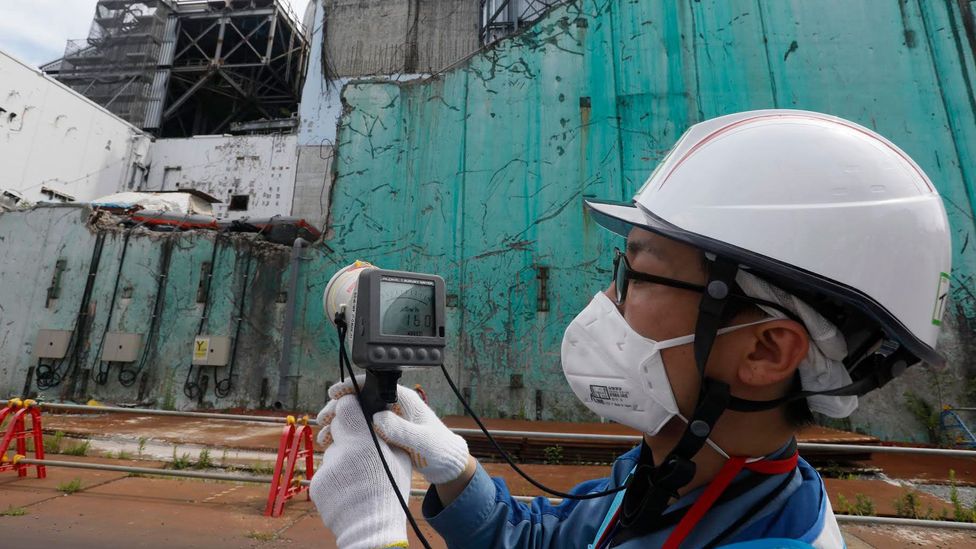 Fukushima still casts a long shadow over any new nuclear plans, but proponents of thorium power plants argue that they would be less prone to meltdowns (Credit: Getty Images)

“Thorium is like wet wood,” says Ratan Kumar Sinha, who succeeded Banerjee as DAE secretary before leaving the post in 2015. He explains that wet wood is no good at starting a fire, but once it’s placed in a furnace burning dry wood, it can catch light. The first two stages of India’s strategy are therefore aimed at converting its abundant thorium reserves into fissile material.

First, conventional uranium-fuelled reactors produce plutonium as a by-product. The next stage combines this with more uranium in ‘fast breeder’ reactors that generate more plutonium than they use. That’s used to build more breeder reactors, and once the fleet is large enough they switch to converting thorium into U233. The final stage combines U233 with more thorium to kick-start self-sustaining ‘thermal breeder’ reactors that can be refuelled using raw thorium.

Realising Bhabha’s vision has proved challenging though. The West’s focus on uranium means that India has been ploughing a lone furrow for some time and its nuclear weapons programme and refusal to sign the Nuclear Non-Proliferation Treaty saw it isolated from global trade in nuclear technology and fuel for decades.

The lifting of those barriers, following the 2008 India–United States Civil Nuclear Agreement, should speed progress says, Sinha. But while the country developed uranium-powered Pressurized Heavy Water Reactors (PHWR) in the 1970s, the second stage has been a long time coming. An experimental breeder reactor that came online in 1985 has still not reached its 40MW designed capacity. The country’s 500MW Prototype Fast Breeder Reactor (PFBR) – the blueprint for a future fleet – is targeted to come online this year, but the first official launch date was 2010. In other words, it’s far from guaranteed. 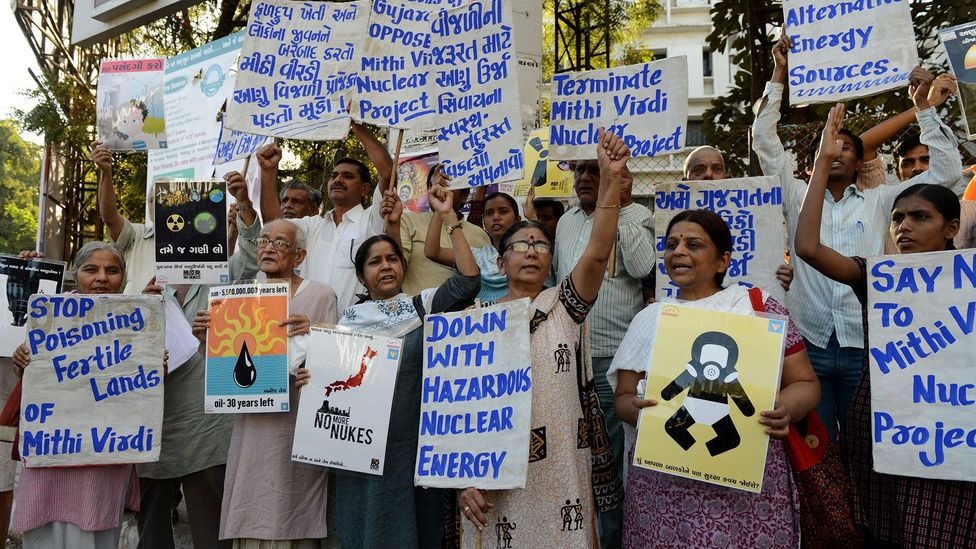 Nuclear energy in India remains a controversial prospect, but those in favour claim that it is the only way to wean the country from fossil fuels (Credit: Getty Images)

India will also need to build up operational experience before any expansion, says Banerjee, and it will take time to breed the required fuel – roughly 10 years to double the plutonium to build another reactor. It’s even longer for thorium, which is why plutonium will be used to build out the network before switching to thorium conversion. Extracting U233 from the spent thorium also poses daunting challenges, because another by-product of the fuel cycle is U232, which emits highly radioactive gamma rays. Researchers at the Bhabha Atomic Research Centre (BARC) have demonstrated the process experimentally but doing so at scale will require facilities with heavy radiation shielding and complex robotics to isolate workers.

The design of India’s first reactor that could burn thorium is complete – the Advanced Heavy Water Reactor (AHWR). But construction is not imminent, and Sinha, who led the design, stresses it’s not a blueprint for the third stage. It will still need fissile material top-ups and is aimed more at providing experience with the fuel cycle and demonstrating new safety features.

An eventual third stage reactor will be a self-sustaining ‘thermal breeder’ that needs U233 and thorium to get started, but can then be refuelled with natural thorium. The specific design of that reactor is an open question, but the consensus is that reactors using a molten salt mixture as both fuel and coolant are the most promising. That’s a design pursued by proponents in the West and China and early R&D is underway in India. 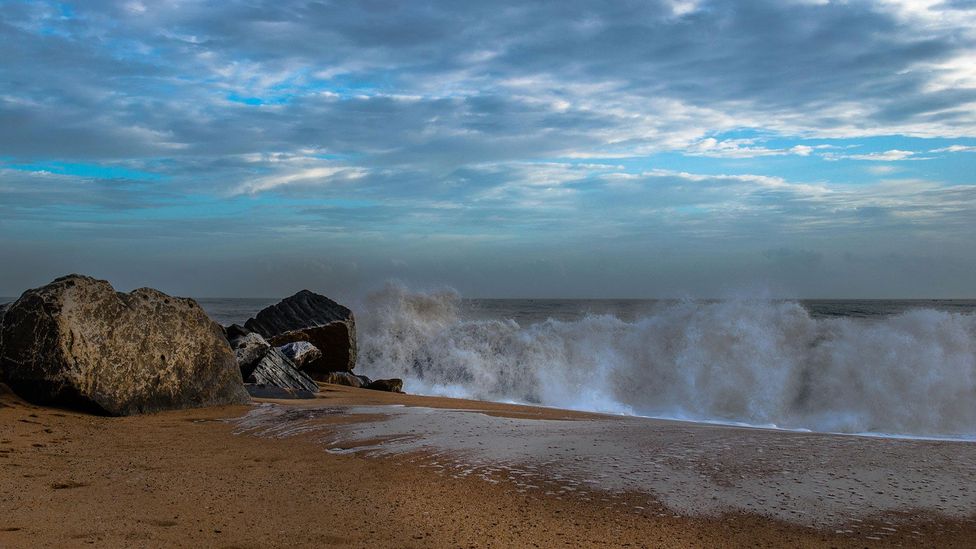 Kerala's beautiful beaches hold 16% of India's thorium reserves, a major potential power source - if only scientists can find the right way to exploit it (Credit: Alamy)

Even India’s nuclear establishment admits the country is unlikely to generate substantial energy from thorium until at least the 2050s. Others are more sanguine. “Thorium has been talked about for 70 years now and it will continue to be talked about in the future tense, I think, for the conceivable future,” says M. V. Ramana, a professor at the University of British Columbia, Canada, who has written a book about India’s nuclear policy.

One frequently touted benefit is safety, because thorium reactors should be less prone to meltdowns

Conventional nuclear is already economically unconvincing, he says, so adding the cost of developing thorium-friendly reactors and complex fuel reprocessing is untenable. Proponents say thorium’s advantages outweigh these costs, but he thinks the case is overstated. One frequently touted benefit is safety, because thorium reactors should be less prone to meltdowns; but Ramana says you can’t predict possible failure routes until full-scale models are running. “Chernobyl and Fukushima and so on, they were all accidents that were not supposed to happen," he adds.

While the presence of U232 means thorium waste is more hazardous in the short-term, its particular mix of isotopes are less hazardous over longer periods due to the amount and type of radiation it releases. That means it's likely to be easier to handle and store in the long-term, says Cambridge’s Parks, but the benefits are marginal and possibly of limited relevance, considering we’ve still not found a convincing way to deal with existing nuclear waste. Perhaps the most compelling advantage is the difficulty of weaponising it, he adds. U233 can make atomic bombs but the complex processing makes it unattractive.

None of these potential benefits are what’s really driving India’s program though, says Ramamurti Rajaraman, a physics professor at Jawaharlal Nehru University, New Delhi. “It's partly institutional pride,” he says. The nuclear establishment is loath to abandon a longstanding flagship program. But more importantly Bhabha’s argument for self-sufficiency has remained potent, he adds, particularly following the country’s period of nuclear isolation. 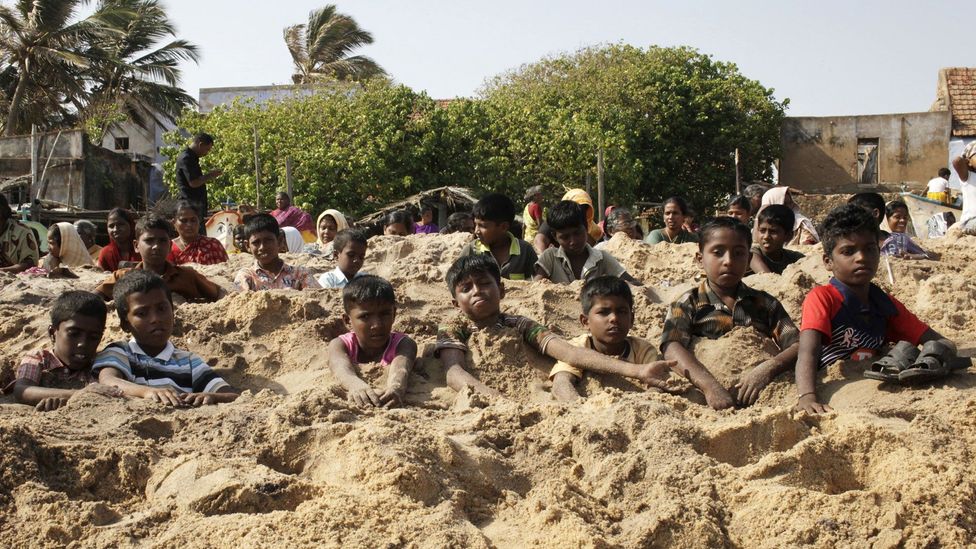 Activists from Tamil Nadu bury themselves to protest the loading of a uranium reactor. Yet the same sand holds thorium, a potentially safer nuclear power (Credit: Getty Images)

India is trying to meet booming energy demands while weaning itself off a chronic coal addiction. Renewables are undoubtedly part of the picture, says Anil Kakodkar, another former DAE secretary now on India’s Atomic Energy Commission. The country plans to reach 175GW of installed renewable energy capacity by 2022; it’s fourth in the world for installed wind capacity and fifth for solar. But sun and wind are too intermittent to power the whole country. “Nuclear is the only option for such large-scale baseload generation that is non-fossil," he says. "And in the Indian case it has to be essentially from thorium."

Whether self-sufficiency is necessary for energy security is up for debate. When Bhabha devised India’s strategy global uranium deposits were believed to be smaller and rapid nuclear expansion was expected to put pressure on supplies. But global nuclear capacity has been in decline since the 1990s and uranium is more prevalent than first thought. 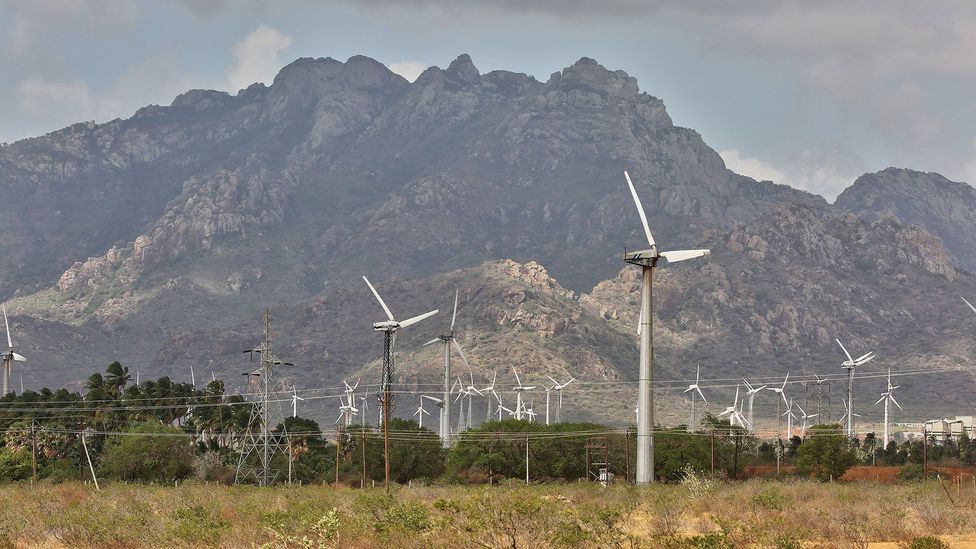 Besides its nuclear power schemes, India is also investing heavily in renewable power sources, such as these wind turbines in Punniyavalanpuram, Tamil Nadu (Credit: Getty Images)

William Nuttall, a professor at the Open University specialising in energy policy, understands how India’s historical perspective could make thorium attractive. But there’s little sign of an impending squeeze on uranium, so global markets provide a sustainable route to energy security, he says. It’s also entirely possible to decarbonise without nuclear. “Nuclear has attributes that mean it's beneficial in respect to climate change and energy security, but its case is not manifest,” he says.

India isn’t putting all its eggs in one basket though. Besides its continuing work on wind and solar energy, the government approved construction for 12 new heavy-water reactors to add to the 22 in operation and 9 under construction. It’s also exploring deals for foreign-designed reactors with Russia, France and the US.  But given its progress so far, Parks thinks thorium makes sense as a long-term hedge for India. “They should be commended for having had a plan and stuck to it,” he adds. “I wish the UK could be accused of the same.”

“If you really want to move toward carbon-free energy for the world, I don't see how it can happen without nuclear and I don't see how nuclear can grow without thorium,” he adds. “So somebody has to take the lead.”