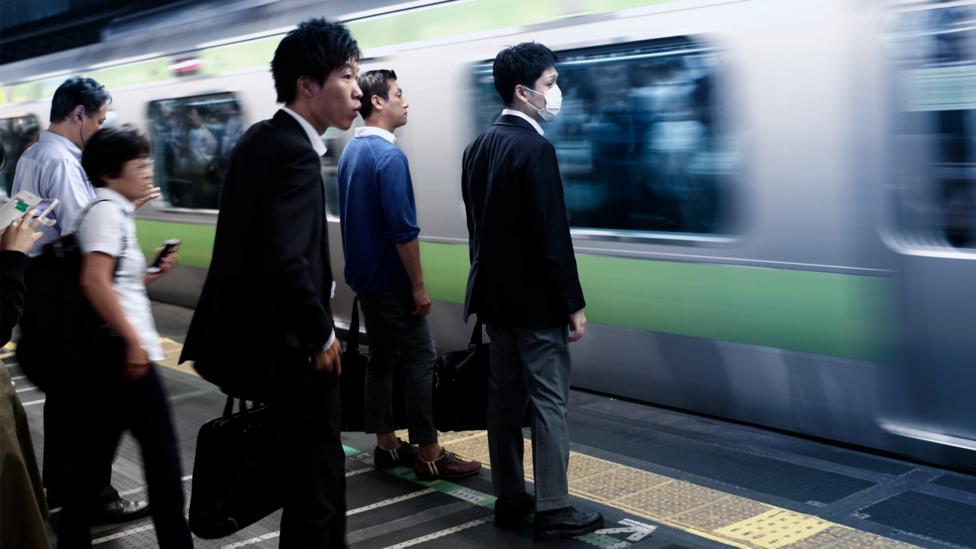 By Chris Baraniuk 23rd January 2019
Japanese train companies appeared to have found that soothing blue lights could reduce the rate of suicides at station. But does the "nudge technique" really work? And if so, how?

In 2013, a scientific paper was published that would become the seed for thousands of viral news stories and social media posts. The suggestion was astounding: blue lamps at train stations prevented suicides at those locations. And scientists could even show that the suicides fell by as much as 84%.

The idea has since caught on, inspiring similar projects in many other countries. But as with many interesting but complex science stories, some of the details have got a little distorted as it was passed along the way.

It all started in the late 2000s, when a number of Japanese railway companies began installing blue lamps above train station platforms. It was an attempt to deter people from suicide in such places – a so-called “nudge” technique. Nudge techniques are ways of influencing behaviour that, although apparently subtle, can have surprisingly large impacts.

In one study, people who had experienced psychological stress returned to a state of relaxation more quickly when they lay in a room bathed in blue light

The idea was that blue light can have an effect on people’s state of mind. One study in 2017 backed up this notion; it showed that people who had experienced psychological stress returned more quickly to a state of relaxation when they lay in a room bathed in blue light.

Michiko Ueda at Waseda University heard about the railway companies’ experiments on station platforms and was told the lamps had proved to be a success. Ueda has studied a huge range of factors that may be influencing Japan’s suicide rate – from economics to natural disasters and even discussion of celebrity suicides on Twitter. But she says her first reaction to the railway companies’ claims was scepticism. “I thought we should follow up and I decided to contact the railway company to ask if they could provide data,” she explains. 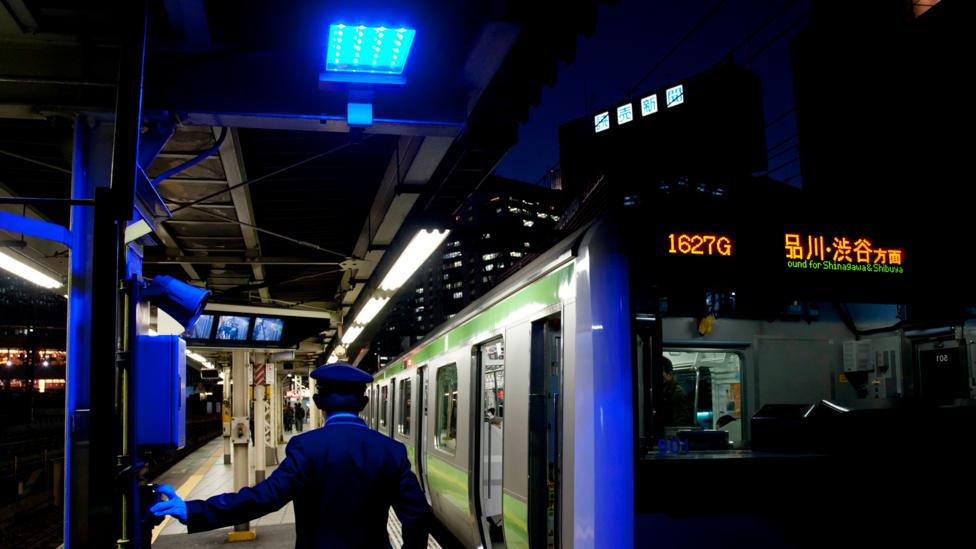 The blue lights were installed on all 29 stations of the Tokyo Loop (Yamanote) Line in 2008 (Credit: Damon Coulter)

After analysing 10 years’ worth of data on suicides at 71 Japanese train stations, Ueda and her colleagues found that there was some evidence of an effect on passengers. They saw an 84% reduction, a figure that was soon widely reported.

Unfortunately, that’s not the whole story. When news reports about the findings came out, Masao Ichikawa at the University of Tsukuba took another look at the data. He pointed out that it was important to distinguish between data collected during the day and night at outdoor train stations. During the day, the lights may be easily missed, or even turned off.

Ichikawa also scrutinised a measure known as the “confidence interval”. Statistical analyses always carry an inherent uncertainty around a particular result – such as the size of this effect – and the confidence interval expresses the possible range of those values. Ichikawa noticed that the confidence in in Ueda’s paper was extremely wide: 14-97%. “Statistically very unstable,” he says. This means the actual effect could have been as low as a 14% reduction – still a significant change, but not nearly as big as the media coverage had suggested.

He hoped his own paper, published in response the following year, would ensure that people didn’t begin thinking that blue lights were a miracle deterrent – that they somehow had an extraordinary effect on people who were considering suicide.

The installation of protective barriers and screen doors along the edges of platforms could be far more useful, says Ichikawa. However, he acknowledges that they cost a lot more than blue lights. The expense may be worth it, though, if the blue light effect turns out to be minimal.

Since publishing her paper, Ueda has been stunned by the number of enquiries she gets from railway firms around the world, including Switzerland, Belgium and the UK. “It’s amazing,” she says. There are already at least two examples of blue light installations in Britain – one at a train crossing in Scotland, and there are also such lights at Gatwick airport train station. 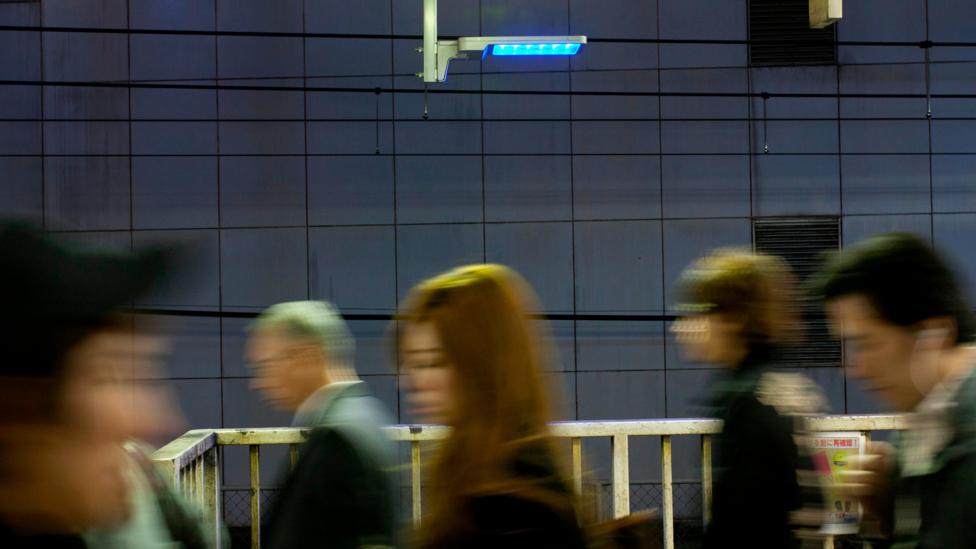 The scientific evidence that blue light really can reduce the rate of suicide is mixed, and the true effect is probably smaller than often reported (Credit: Damon Coulter)

While she understands the issue of cost associated with the screen doors, she reiterates that it’s important to understand that the blue light effect may be more subtle than some think – and we still don’t know exactly what impact the lights are having.

For example, perhaps the installation of new, bright lights – regardless of colour – caused people to become more self-aware, thus changing their behaviour, suggests Ueda. And maybe after time the blue lights, should they be effective at preventing suicide, will fail because people will grow accustomed to them.

Ueda is now conducting a fresh study to measure the psychological impact of blue lights, but there are already conflicting results on that point from other teams. The 2017 paper mentioned above gave credence to the idea that blue lights could be calming, but Stephen Westland, an expert in colour and design at the University of Leeds, says the lights may not influence another important factor – someone’s impulsiveness.

Experiments carried out by his former PhD student Nicolas Ciccone found that, although participants reported that they felt more or less impulsive depending on the colour of light illuminating a room they were in, behavioural and neurological measurements didn’t suggest any deeper effect.

One experiment involved assessing risk-taking behaviour by asking participants to pump up a virtual balloon by clicking a button. They were promised a cash reward should they be able to avoid bursting the balloon. “Each pump carries greater risk, but also greater potential reward,” the paper notes. 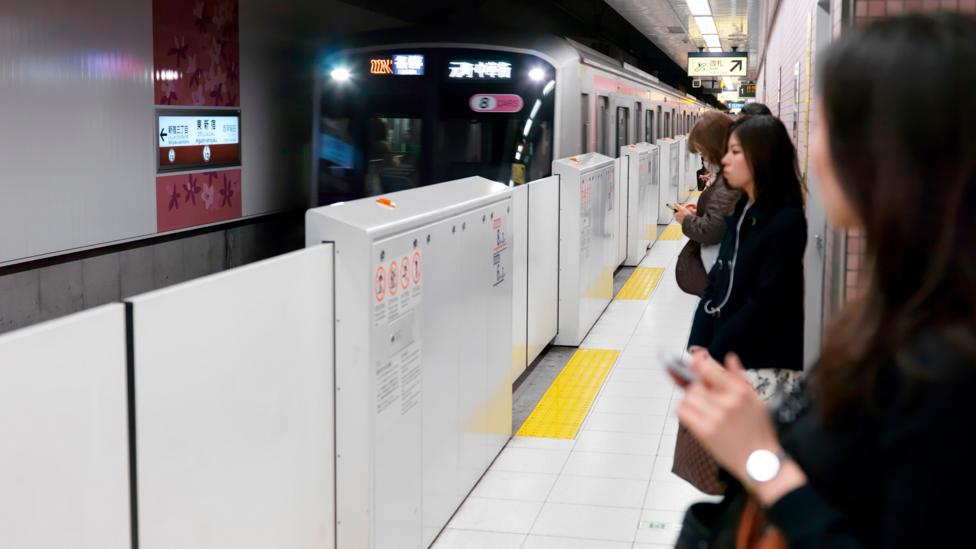 Even if blue light does reduce the risk of suicide, platform screen doors will be a more effective way of protecting vulnerable passengers (Credit: Alamy)

“We didn’t really get any evidence that I can put my hand on my heart and say blue light or red light makes you more impulsive,” explains Westland. And although light therapy is established as a treatment for seasonal affective disorder (SAD), it does not necessarily follow that changes in mood of this order would influence a suicide attempt.

“There’s no necessary link to any actions you might take,” he says.

All of this is not to berate people for hoping that innovative ways of tackling Japan’s suicide problem can be found. After all, the nation is among the top 20 in the world in terms of suicide rate – a problem that many in the country are seriously wrestling with and trying to redress.

Blue lights may have an effect on people contemplating suicide, but, to date, science actually gives somewhat inconclusive results. As Ueda herself says, “I really don’t want people to think that blue lights are the solution.

“To repeat, people should use multiple measures and platform screen doors are probably the most effective one.”

To find someone to talk to about mental health, please visit www.befrienders.org/directory. The International Association for Suicide Prevention has a list of global agencies that may also be able to provide immediate support.