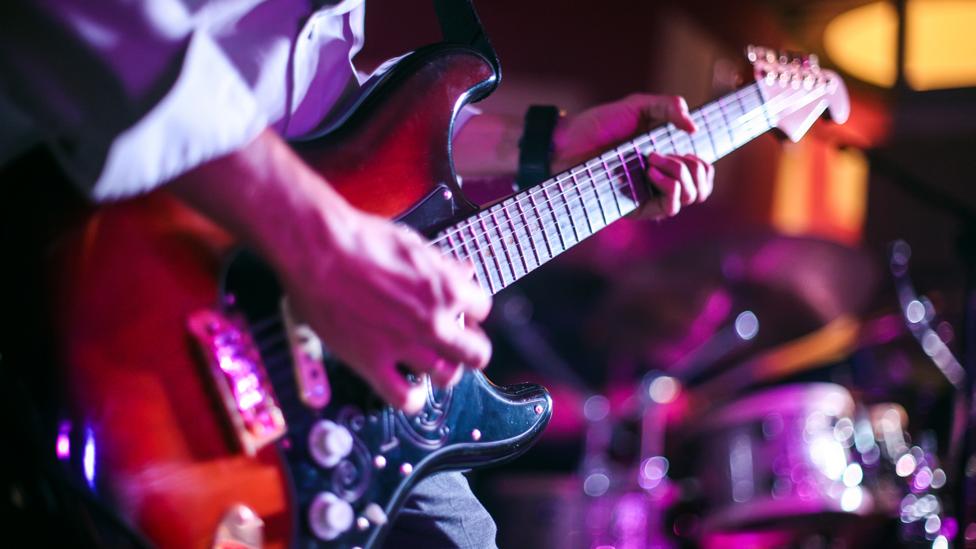 By Joobin Bekhrad 8th March 2019
Guitar players a century ago sometimes struggled to get their instrument heard. That all changed when a small group of inventors added something into the mix – electricity.

“This is really it,” said Keith Richards in an interview from the early 2000s, acoustic guitar in hand. “I mean, all they did was put a phone in it!” After a raspy guffaw came a proviso: “But it was the right phone at the right time …”

Was Richards oversimplifying the electric guitar? Yes and no. Obviously, one of the most important musical innovations of the past century didn’t come about by simply shoving a telephone into the sound-hole of an acoustic guitar, and that certainly isn’t the case today; but, a few modern conveniences aside, the electric guitar functions more or less the same as an acoustic guitar.

That said, it was these very “mod cons” that were responsible for cementing the electric guitar’s place in music history and making it the culture and design icon it is today.

Although inventors like George Breed had been experimenting with strings and electric currents to produce sound as far back as the 1890s, it wasn’t until the 1920s that the first iterations of the electric guitar proper appeared. “The origins of the [electric] guitar were in country and big band, and then early forms of rock and roll,” says Andy Mooney, chief executive of Fender Musical Instruments.

Acoustic guitars were used for both country and big band music, but it was particularly in the case of the latter that they posed a problem. Simply put, they weren’t loud enough to be clearly heard above the other myriad instruments.

In response to this problem, various individuals began looking at ways to amplify the sound of the guitar. In 1928, instrument makers Stromberg-Voisinet created the first commercially produced electric guitar, four years after Gibson fitted an electromagnetic device to violas and basses that picked up vibrations from the bridges of the instruments and converted them into electrical signals. 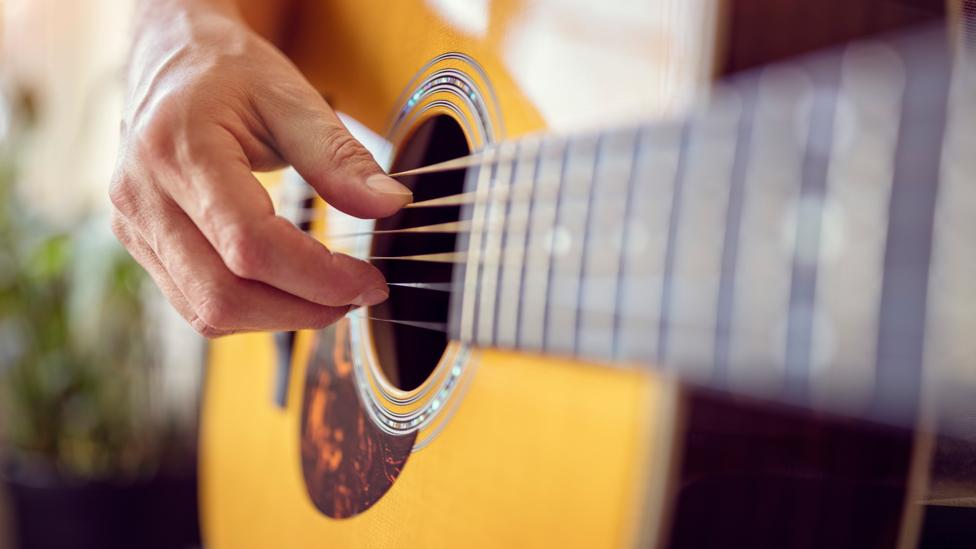 Inventors had tried to amplify the sound from acoustic guitars, with varying success (Credit: Getty Images)

The Stromberg-Voisinet guitar also made use of this device – known, as the description suggests, as a “pickup” – although in this case, it captured vibrations from the soundboard of the guitar, which were converted into electric signals that could be sent to an amplifier and speaker. While the Stromberg-Voisinet increased the volume of the guitar, the sound it produced still left much to be desired.

A solution to the lacklustre pickup of the day arrived in the early 1930s. As with big-band players, Adolph Rickenbacker – a Hawaiian guitar player – was frustrated by the guitar’s low volume compared to that of other instruments in an ensemble. At first, he co-designed in the late 1920s a “resonator”, an acoustic guitar that naturally amplified sound via one or more metal cones on the soundboard and sometimes even a body made entirely of metal.

He then decided to take the idea further with what, on account of its shape, became known as the “Frying Pan”. What was special about this electric guitar (albeit a Hawaiian one) was that, unlike Gibson's creations and the Stromberg-Voisinet, its pickups captured vibrations from the strings themselves. 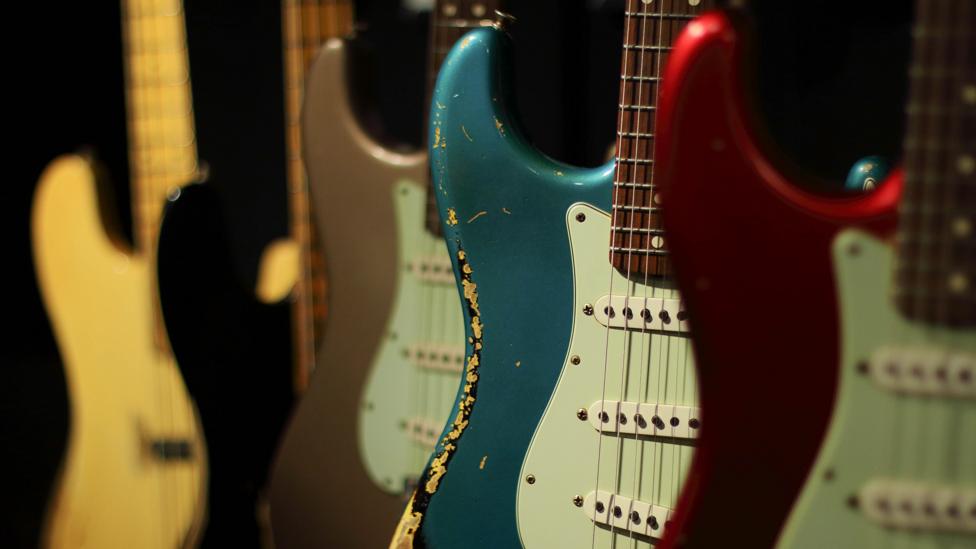 Unlike acoustic guitars, electric examples don't even have to be made from wood (Credit: Getty Images)

The innovation was a success amongst Hawaiian guitar players, but acoustic players weren’t quick to adopt the idea of an electric guitar initially. Attitudes shifted in the late 1930s and, soon enough, Les Paul — another notable guitarist — got it in his head to tinker around with pickups, as well as see how he could improve the sound quality of the instrument overall.

The problem with acoustic guitars fitted with pickups (the sort jazz musicians played) was that they produced large amounts of feedback and unwanted noise. As such, Paul devised the first solid-body electric guitar – the “Log” – in 1939. This however, was laughed at by Gibson, the premier manufacturer at the time, and the humble Log never went into production.

Things changed in 1950, however, when Leo Fender, a self-taught electronics enthusiast, created the Esquire, the first mass-produced solid-body guitar. Taking note of Fender’s successes, Gibson ate humble pie, introducing its own solid-body model, the Les Paul. By 1954, with the advent of Fender’s three-pickup, solid-body Stratocaster, the three most iconic electric guitars of all time were all released. Music would never be the same again.

Along with the string vibrations, they also produce feedback in the form of an unpleasant hum when not strummed

Whether hollow or solid-bodied, it’s through pickups that electric guitars create their sound. That’s why electric guitars don’t need to be as big as acoustic ones, or even have sound holes, for that matter. They also don’t need to be made of wood – almost every possible material has been used in their construction, from plastic to aluminium – although wood is typically used for its resonant qualities.

Essentially, when a string, typically made from nickel and steel (and much thinner in diameter than an acoustic one), is struck, the magnetised pickups underneath catch its vibrations through the electromagnetic field they create (and that partially magnetises the string) and send signals to a connected amplifier, which often contains a built-in speaker.

A pickup typically contains a number of magnetic pole pieces (although some consist of a singular magnet) wrapped around many times with fine wire. One type of pickup, popularised by Fender and now largely associated with it, consists of a single coil of wire. Known for their bright, snappy, and sharp tones, they’re ideal for genres like country and funk. The only issue with these is that, along with the string vibrations, they also produce feedback in the form of an unpleasant hum when not strummed, especially in the presence of electrical equipment. 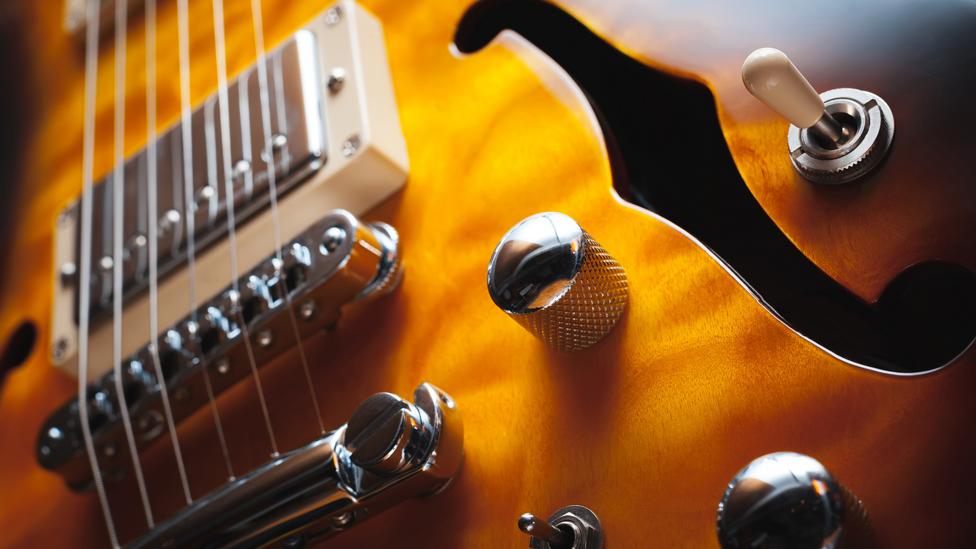 The use of amplifying technology means an eletric guitar no longer needs a sound hole to create resonance (Credit: Getty Images)

To combat this, Gibson developed the “humbucker” – double-coiled pickups wired in reverse in terms of coil and magnetic direction – that not only significantly reduced feedback, but also resulted in a fuller, richer tone. While a number of other kinds exist — such as the P90, a warmer-sounding single-coil produced by Gibson, and the mini humbucker — the single coil and humbucker still continue to be the most prevalent.

While electric guitars can produce an almost infinite array of sounds, they’ve become – at least in popular culture – most associated with a dirty, distorted one. Think of the growling introduction to T Rex’s Twentieth-Century Boy or The Kinks’ menacing riff to You Really Got Me. Guitarists nowadays strive to emulate these sounds, and “distortion” is a standard feature on most amplifiers.

This, however, wasn’t always the case. As with hi-fi amplifiers, the first guitar amplifiers, produced in the early 1930s, strove to simply increase the sonic output of the instrument. Like the early pickups, though, they weren’t loud enough for onstage use. With the advent of Fender’s 18-watt Super Amp in the late 1940s, some guitarists were pleased to find that, when they turned the volume all the way up, the sound became crunchy and distorted. In other words, the signals, as a result of an unintended technical shortcoming, were too much for the overdriven amplifier to handle.

You certainly don’t want to go and make some electronics that make a guitar sound like it’s a bee in a box, do you? – Roger Mayer

What happened when amplifiers were pushed into overdrive was that the signals would become “clipped”: that is, their highs and lows would disappear. This resulted in a compressed tone laden with harmonics. “All [musicians] would do was turn the amplifier up as loud as they could,” says Roger Mayer, a pioneer in creating distorted tones in the 1960s. “The amplified sound produced quite a musical type of distortion.”

Today, effects pedals such as those that Mayer still makes can produce such overdriven tones at lower volumes, but, as he points out, only certain types of distortion actually sound good. “The golden rule, basically is, if you modify a wave form in such a way that the harmonics and the end result do not obey natural laws that occur in nature, it’s not going to sound very good … A series of odd harmonics is not as musical as the even harmonics are. It sounds discordant.”

Mayer doesn’t recommend slashing a speaker, as The Kinks did in the case of You Really Got Me, which added extra distortion: “Now that, you might be able to use once on a track, because it becomes annoying very, very quickly. You certainly don’t want to go and make some electronics that make a guitar sound like it’s a bee in a box, do you?” 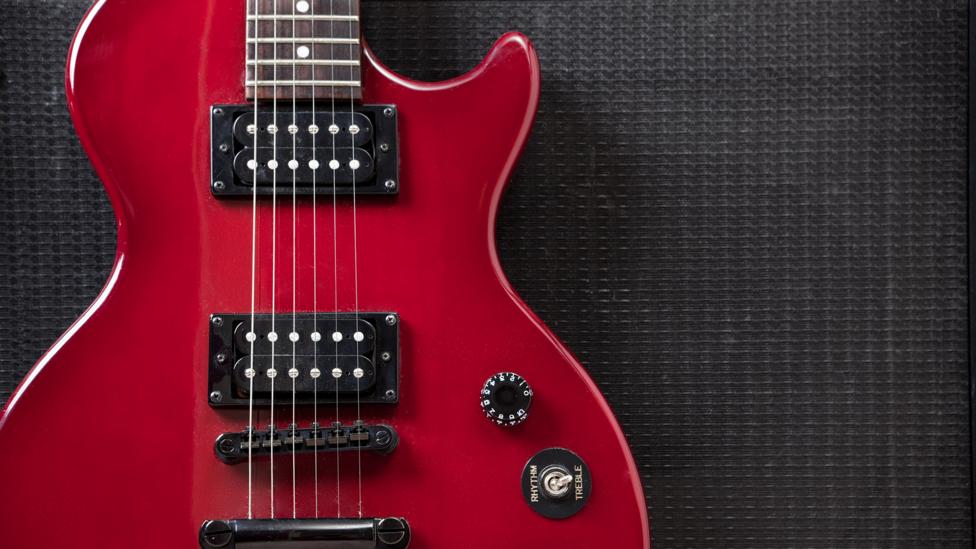 The basic design of the electric gutiar has changed little in the last 70 years (Credit: Getty Images)

Although the most popular electric guitars like Stratocasters and Les Pauls have been around for nearly seven decades, not much has changed in terms of their design, looks, or sound. “A Stratocaster that you would buy today is essentially the same form that Leo Fender designed back in 1954,” Mooney points out. And, while modifications and amendments to popular models have certainly been made along the way, some, like Richards, still prefer the originals.

“The electric guitar all around is a weird instrument,” he noted in the aforementioned interview. “In that, really, the best ones were built when they were first invented. They’ve not improved. You can’t better them.”

I think there will always be universal players … who can look at the form of the instrument and go, ‘Oh, I love you just the way you are’ – Andy Mooney

There are periodic claims that the electric guitar is dead, but it remains surprisingly resilient to further evolution. Is there really no room for improvement or evolution, as players like Richards suggest? While Fender is set to release an electric-acoustic hybrid guitar, Mooney admits that many consumers are of the Keith Richards mindset.

“Whenever a brand or a company – ourselves included – has tried to meld new technologies with the physical instrument … the consumer has generally rejected it,” he says. That said, he feels there are “lots of ways to rethink how pickups are designed and used”, as well as a need to cater to both purist and modern sensibilities.

“I think there will always be universal players … who can look at the form of the instrument and go, ‘Oh, I love you just the way you are’. But I think there’s always going to be a group of leading-edge consumers who are going to want betterment and something new.”