Despite its rainy reputation, the UK’s water reserves are seriously strained - and its insatiable demands are putting pressure on other countries too

When it comes to water scarcity, the last place on Earth you’d think of is rain-soaked England. Winter here is cold and wet. It rains for what feels like weeks on end. Lawns squelch with saturated soil and garden water butts overflow, likely to be unused until April. The UK’s average annual rainfall is a sopping 1200mm, compared to the 300s in Afghanistan, or just double-figures in Egypt.

In the South-East of England, the average annual rainfall lingers around 500-600mm – drier than South Sudan, or Perth, Western Australia

Yet within a few short months, significant parts of the UK will be staring down the barrel of empty water butts. Much of that four-figure average rainfall is propped up by the rainy highlands of Scotland, Wales and Northern England. In the South-East of England, the average annual rainfall lingers around 500-600mm – less than South Sudan, or Perth, Western Australia. This also happens to be the UK’s most populated area, packing some 18 million inhabitants into just 19,000 sq km (the size of New Jersey), including its capital, London. And this region is drying up, fast.

Last year (2018) saw six consecutive months of below average rainfall in England, causing many reservoirs to run dangerously low. This was no ‘one off’ event. The previous year, 2017, saw the driest 10-month period for more than 100 years.

The latest Government Water Abstraction plan shows that 28% of groundwater aquifers in England, and up to 18% of rivers and reservoirs, are unsustainably abstracted. Only 17% of England's rivers are classified as being in ‘good ecological health’.

Yet much of the public remain oblivious to the problem. The majority (55%) of freshwater in the UK is abstracted for domestic, household use, compared to just 1% for agriculture. The average Brit uses 150 litres of water per day, through a combination of showers, high-flush toilets, dishwashers, washing machines, and garden hoses. Compare that to Cape Town, where annual rainfall also averages around 500mm yet residents’ usage is capped at 50-70 litres per day. 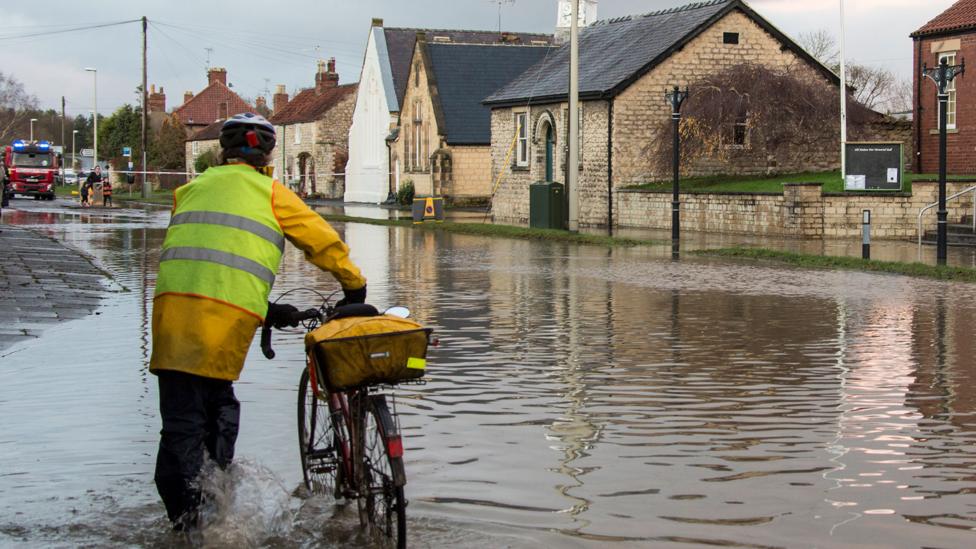 Much of the UK's rain falls in Scotland, Wales and northern England (Credit: Getty)

“People don’t see water as something we need to save… the [public perception is] we are a wet country”, sighs Hannah Freeman, senior government affairs officer for the charity Wildfowl & Wetlands Trust (WWT). “But the [latest] climate change projections say that the chance of dry summers is going to increase by up to 50%.” And warmer winters, too. The UK has just experienced its warmest February on record, with temperatures reaching 21.2C in London – the first time a reading above 20C had ever been recorded during the winter. Bemused Brits walked around in shorts and T-shirts and sunbathed in parks, when they would usually be wrapped up in scarves.

England offers a case study of how previously wet countries will have to wake up to a future of increasing water scarcity. Conor Linstead, an international freshwater specialist at WWF, says many countries are now “experiencing a water scarcity problem from over abstraction because they failed to give enough thought to water allocation mechanisms… exceptional droughts will become the norm under climate change”.

Sao Paulo, in Brazil – a country that boasts 12-16% of the world’s freshwater – incredibly almost ran out of water in 2014 during the worst drought in its history. The main reservoir for the country’s largest city dropped to just 3% capacity (far lower than Cape Town’s widely reported crisis in 2018, when official’s came perilously close to turning off the city’s taps if its reservoirs fell below 13.5% capacity). In August 2018, the mighty Danube river flowing through Hungary dropped to a record low of barely above half a metre, halting tourist cruises and freight shipping.

England’s London and Thames Valley region is classified by the UK Environment Agency as 'seriously water stressed'. “We have relatively small water storage facilities”, explains Steve Tuck, abstraction manager for Thames Water, “which means we take from rivers and groundwater aquifers to supply the large population.” He admits this system is “a little hand to mouth”. High rainfall in winter should sufficiently top up the aquifers and slowly seep out into the rivers during summer. But over-use by households coupled with a growing population and less frequent rainfall has led to “an exacerbation” of the problem, Tuck admits. 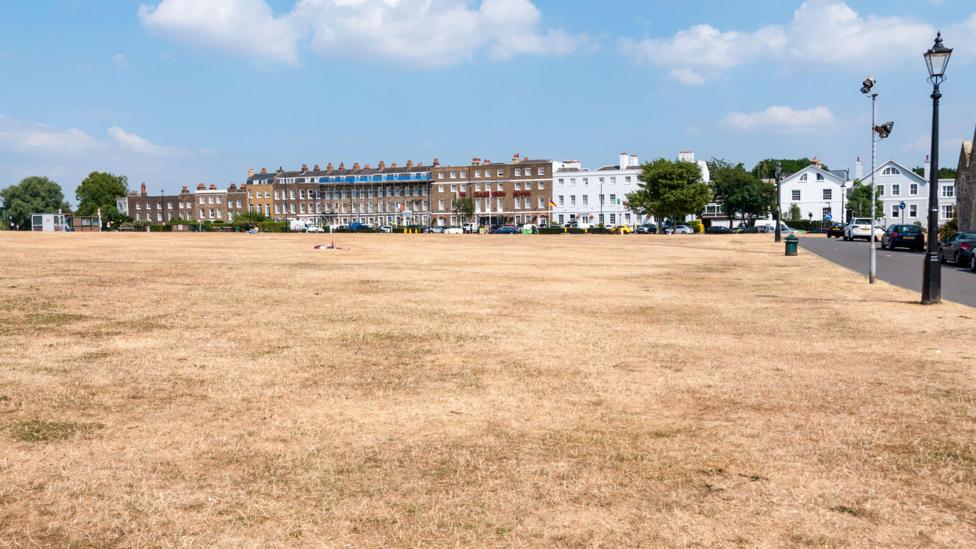 London has suffered a series of serious droughts in recent years (Credit: Alamy)

Thames Water has even invested in the UK’s very first desalination facility in the Thames estuary to provide London with an additional 150 million litres of drinking water a day. “Another option is to potentially transfer water across from the River Severn, water that ultimately comes from the Welsh mountains, and transfer that [by pipeline] to the Thames”, says Tuck, which raises the prospect of the thirsty south sucking the rest of the UK dry.

There is a prospect of the global north sucking the global south dry, too. UK supermarkets offer fresh fruit and vegetables all year round, irrespective of the season, supplied from around the world. Around 24% of this is thrown in the bin, the vast majority after purchase. According to Dorcas Pratt, deputy director of Water Witness International, the sustainable development and water charity, “the big story here is that 62% of our virtual water use in the UK – the water we needed to produce food we eat and products we use – is sourced overseas.

“Our global water footprint means that the water used by the UK is interwoven with that of communities and economies across the world. So not only are we over-abstracting water from some of the UKs aquifers, but through our globalised consumption patterns we are driving over abstraction (or pollution or water conflict or ecosystem degradation) in countries across the world.” She points to the asparagus farms in Peruvian deserts as just one example.

Despite dry spells and drought becoming more frequent in the UK, Catherine Moncrieff at WWF-UK believes the underlying issue is people “using water wastefully”. Traditionally wet countries need to reconnect with the worth and cost of water. Only half of households in England and Wales have a water meter installed. The other half pay a flat monthly rate, irrespective of the amount of water they use; you can leave a lawn sprinkler on all day, or take a one-hour shower, and face no extra cost. 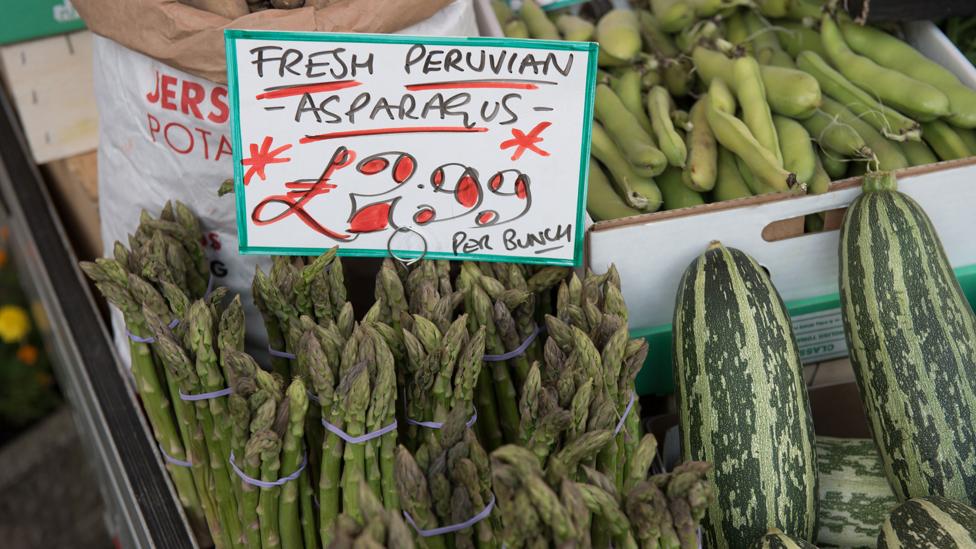 By contrast, an Environment Agency report from 2008 identified Denmark, Finland, the Netherlands, Germany and Belgium as almost fully metered – all had a far lower water consumption per person than the UK’s 150 litres a day. Finland’s was just 115 litres per day. But that wasn’t always the case. In the 1970s, Finns saturated themselves with some 350-420 litres per day. The downward trend since, says the report, is due to “higher water prices, better technology in households and utilities, increased consumer awareness and better utility management.”

According to Linstead at WWF, “almost every country that has carried out successful water efficiency campaigns has metering. Universal water metering also helps the utility to detect leaks, meaning further water savings.”

Denmark, too, used to take freshwater for granted – perhaps understandably, in a small country that boasts over 120,000 lakes and 69,000 km of watercourses. In 1989, the average Dane quaffed, flushed and bathed in 170 litres per day, at a cost of just 2 euros per cubic metre (1,000 litres). The introduction of mandatory water metering and a steady price increase up to 7 euros pcm2 by 2012 saw individual consumption drop to 114 litres per day. WWF go further, saying that 80 litres per person “is entirely possible to achieve now” in homes fitted with modern, water-efficient appliances.

A coalition of charities including WWF and WWT, under the moniker “Blueprint for Water”, are now calling for more sustainable water consumption, both in the UK and beyond. Between 2010 and 2015, Southern Water became the first English water company to begin mandatory metering; over the same period, the company achieved a 16% reduction in per capita water consumption and a 15% reduction in leakages.

There’s no reason why soggy old England “can’t achieve water security”, says Freeman. “We’ve got plenty of water when it rains! We just need to be better at using it.”

Tim Smedley is a sustainability writer, based in the UK. His first book, Clearing the Air: The Beginning and the End of Air Pollution, will be published by Bloomsbury in March, 2019.