Loading
Ask a Stupid Question | Biology
Do mosquitoes feel the effects of alcohol?
Share using EmailShare on TwitterShare on FacebookShare on Linkedin 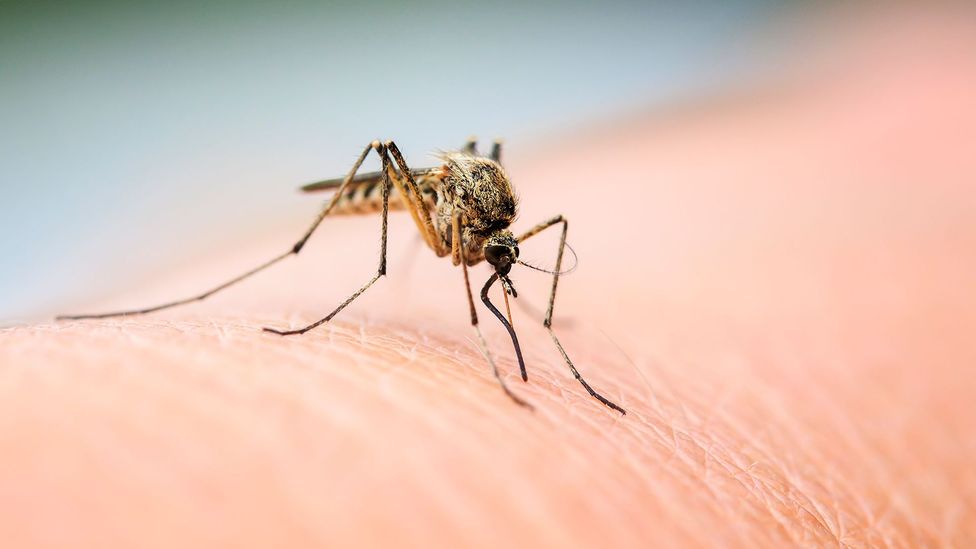 By Stephen Dowling 13th March 2019
In many parts of the world, a cool tipple outside brings with it the risk of a mosquito bite. But what effect does the booze in your blood have on the insect itself?
A

A few years ago, I took part in a vintage car rally in Denmark as a photographer. The rally was less about being the fastest, and more about the effort you put into your fancy dress. It ended in a camping site on the island of Mon, with dinner, dancing and more than a few drinks. Some hours – and drinks – later, I decided it was a good idea to sleep in a deckchair under the balmy Danish stars.

This was about the time I made three important discoveries: a) summertime Denmark has a ferocious population of mosquitoes; b) said mosquitoes are perfectly capable of biting through deckchair material and your shirt and c) drinking alcohol is the mosquito equivalent of someone ringing a dinner bell. My back ended up looking like bubble wrap. It’s not the souvenir I intended to take home with me.

As the Journal of the American Mosquito Control Association found in 2002, the likelihood of being bitten by a mosquito appears to be dramatically increased if you drink alcohol. The study – a small one, involving only 13 subjects – showed those who had drunk a bottle of beer were more likely to have mosquitoes land on them to feed.

Exactly why mosquitoes appear to be more attracted to drinkers, no-one is quite sure. We do know mosquitoes home onto humans thanks to two chemicals we exhale when we breathe: carbon dioxide and octanol. (Octanol, a secondary alcohol created from the breakdown of linoleic acid, is also commonly known as “mushroom alcohol” because it’s the compound that helps give mushrooms their taste.)

But this leads to another question: do mosquitoes that feed on inebriated humans get drunk themselves? It is, despite the sheer number of mosquitoes who have fed on drunk humans over millennia, the subject of relatively little research.

Entomologist Tanya Dapkey, from the University of Pennsylvania in Philadelphia, tells BBC Future: “I suspect the answer is no, because the blood alcohol level is going to be so low.” But look for rigorous scientific study of the link between mosquitoes and alcohol, and there’s only so much you can find. 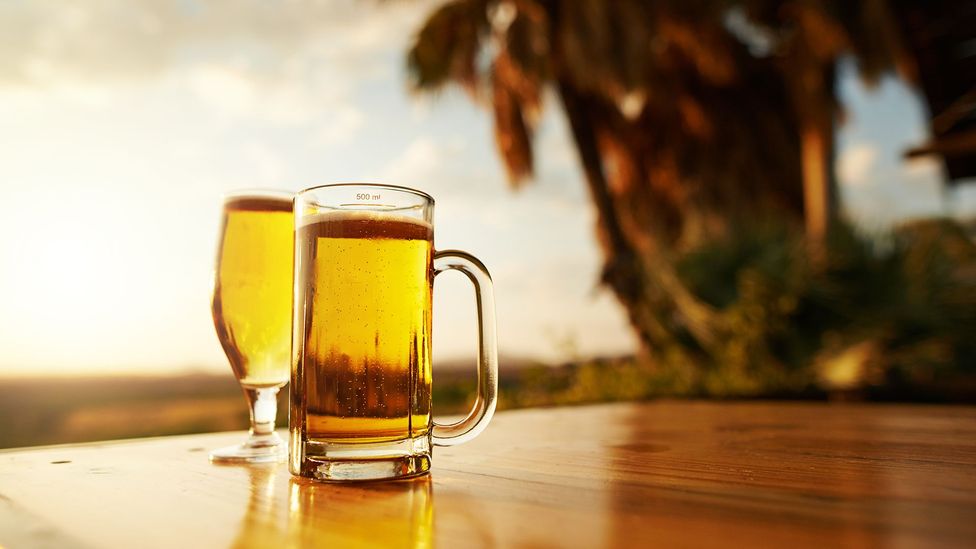 The ethanol that we excrete when we drink alcohol may help attract mosquitoes, research suggests (Credit: Getty Images)

Patsy Stone, the often-refreshed character played by Joanna Lumley in the comedy series Absolutely Fabulous, once famously remarked: “The last mosquito that bit me had to check in to the Betty Ford Clinic.” But in reality, insects can be remarkably resilient to the effects of alcohol.

In a recent article on Popular Science, entomologist Coby Schal, from North Carolina State University, pointed out that a human who had knocked back 10 drinks might have a blood alcohol level of 0.2%. But if the mosquito drank that person’s blood, the effects would be negligible – the mosquito is drinking such minute amounts that it’s the equivalent of diluting those drinks to 1/25th of their strength.

Evolution might have given the mosquito some extra help, too

Evolution might have given the mosquito some extra help, too. Any liquid other than blood is diverted first to a separate digestive pouch where enzymes break it down. So it is likely the alcohol is neutralised before it hits the insect’s nervous system.

“A lot of the adult insects have a crop which stores all of these juices they take inside and then gradually releases them,” says Erica McAlister, a senior curator of insects at London’s Natural History Museum. “Enzymes break everything harmful – like alcohol and bacteria – down.”

McAlister, who wrote the book The Secret Life of Flies, has some previous experience of the effects of alcohol on fruit flies, including the common fruit fly or, as it’s sometime called the “vinegar fly”. These tiny insects have a powerful taste for alcohol-laden rotting fruit. 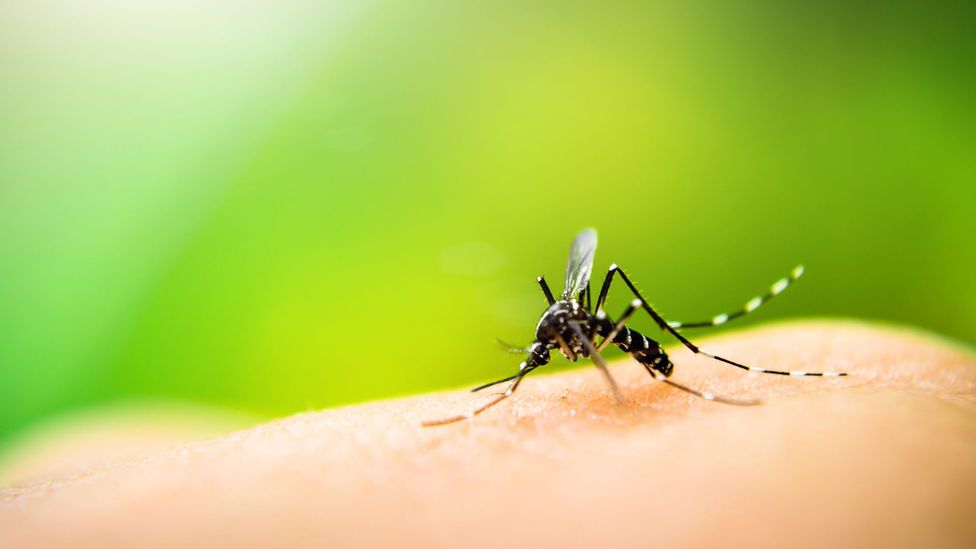 Insects can be remarkably resilient to the effects of alcohol (Credit: Getty Images)

“I don’t know if mosquitoes get drunk, but we see it with fruit flies,” says McAlister. “They do get drunk but they do have very high tolerance. In smaller doses they get very hyperactive – and flirty. And they get less choosy about their partners as well.

“Give them a larger dose and they just pass out.”

Mosquitoes are also partial to rotting fruit, which creates alcohol as the sugars it contains ferment. Only the females feed on blood in order to get the protein needed to create eggs. Males and females also feed on nectar produced by flowers – mosquitoes are key pollinators – and use the sugar it contains to give them energy to survive. This nectar can also sometimes ferment into small amounts of alcohol.

Dapkey says the fact “alcohol makes us more attractive to them is an interesting question to me”.

Some people have a genetic make-up that makes them more attractive to mosquitoes. It’s thought that up to 20% of the population may carry traits that make them more susceptible to bites. One of those is blood type; in one study, those with Type O blood were twice as likely to be bitten as those with Type A blood. Other risk factors appear to be those with a high body temperature, pregnant women (possibly related to body temperature), those who exhale heavily (putting out more carbon dioxide), and larger people.

Mosquitoes are also choosy about where they bite you, depending on the species attacking.  Some prefer your legs and feet, while others are more likely to gravitate to your neck and face, possibly because they’re homing in on carbon dioxide emissions from your mouth and nose.

“I went to Costa Rica and I got mosquito bites on the bottom of my feet,” recalls Dapkey indignantly. “How does that happen?”

But the ethanol that we give off in our sweat when we have been drinking may be the chemical signal behind the findings of the 2002 study. A similar project, this time with 18 subjects in Burkina Faso in 2010, also found mosquitoes were attracted to those who had been drinking. The ethanol in the alcohol you’re drinking – and that you are excreting in minute quantities through your sweat – may be signal to the biting insects that there’s a meal nearby. 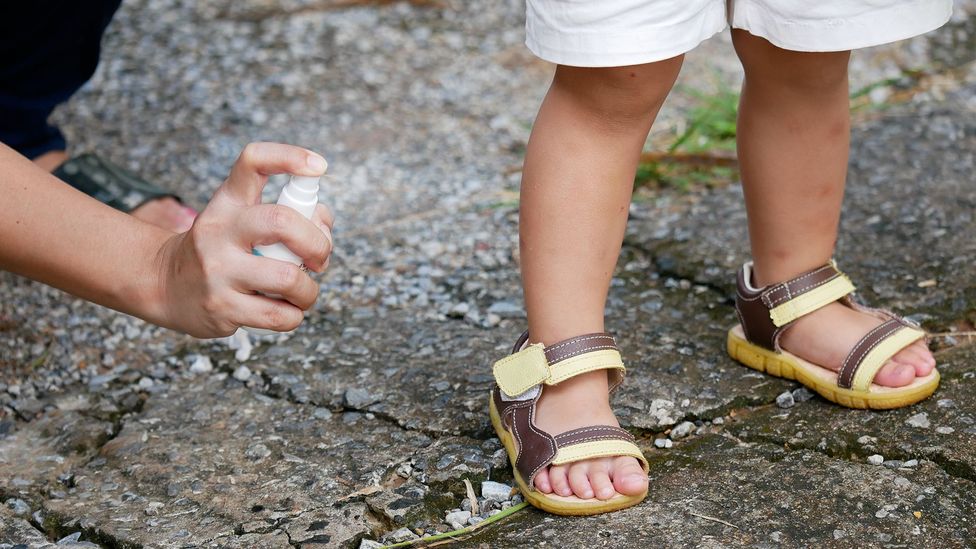 Some people may have genetic factors that may make them more likely to be bitten (Credit: Getty Images)

“If you’re hungry and you’re walking around,” says Dapkey, “the thing that’s more likely to make you go in one direction is the smell of food: that strong smell of hotdog, for instance. Now, you might not eat the hotdog, but it shows you there’s food around there.”

The alcohol may ring the dinner bell, but McAlister points out, the main factors attracting the mosquitoes towards you are probably entwined in your genetic make-up. Simply saying no to an ice-cold beer probably won’t save you from their attentions. And on the plus side, at least with a drink or two, you may not feel the itching quite so much. I know that last one for a fact.