The tongues of ice on the world’s highest mountains are melting away, but we might be able to save the precious archive of information trapped within them before global warming causes it to disappear forever.

Speaking over a cacophony of humming machines in a crammed Swiss laboratory, François Burgay talks about the quiet, open skies above Mont Blanc. "At 4,200m above the sea, you'd never expect the night to be so bright," he says. It's the lack of light pollution from Earth that gives the sky its unique milky quality.

"I think I can speak for many of my peers when I say that to do this job you need to be an explorer at heart," he smiles.

Burgay, a glaciologist with the Ca' Foscari University of Venice in Italy, camped on the iconic peak separating France and Italy for a week in August 2016, the first field mission of his career. As part of the project Ice Memory, he was there to collect ice cores from the Col du Dome glacier, which were then flown downhill and stored in the lab in Grenoble. One day, the researchers hope, part of these ice cores will travel all the way down to Antarctica, where a bespoke vault built out of snow will preserve the knowledge it contains for centuries ahead.

You might also like:
• The young minds solving climate change
• The cities that need a warning label
• How air pollution messes with your mind

Following this first mission, the team braved the Illimani mountain in Bolivia, this time reaching a glacier on the side of a 6,300m-high (20,669ft) peak, and collecting cores that had to carried down by foot, as helicopters were not available. Kilimanjaro in Tanzania is next on the list, with an expedition planned for later this year, and more endangered glaciers will follow as new international partners join the Italian-French initiative. 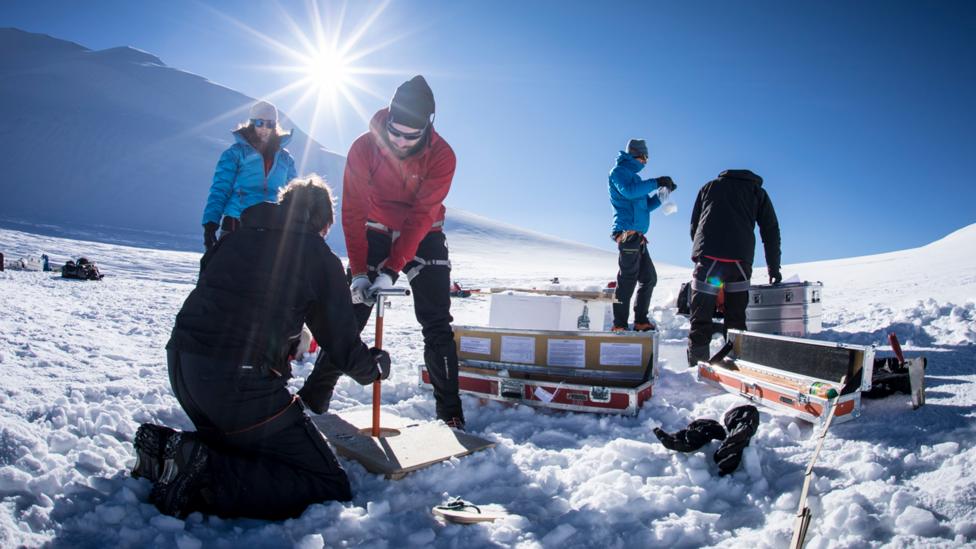 Some of the ice cores are extracted by hand using a device that allows researchers to drill down into the compacted ice of the glacier (Credit: Ca' Foscari University of Venice)

Research shows the world's glaciers have been dramatically shrinking for some time now, likely due to human-made climate change. The United Nation’s Intergovernmental Panel on Climate Change estimates that if global warming continues unabated, we could lose most of the planet's ice cover by the end of the century, with the exception of Greenland’s and Antarctica’s ice sheets.

"The world's glaciers are literally disappearing from under our feet," says Carlo Barbante, a paleoclimatologist also at Ca' Foscari University and one of the founders of the Ice Memory project. For the 1.5 billion people who rely on glaciers for drinking water and irrigation, it is a disastrous situation. But the ice in the glaciers area also a wealth of information.

"We often focus on the immediate threats brought by ice melt, such as lack of water in vulnerable areas like the sub-Indian continent,” says Barbante. “But as scientists who study ice like an archive, we realise we are also losing vital information. We felt we had to do something about it."

Together with French climatologists and glaciologists, Barbante and his team set out to rescue samples of ice from the world's glaciers. Each core of ice represents a precious archive from history that stretches thousands of years into the past. Trapped in the ice are tiny bubbles of gas, particles of dust, pollen and even tiny organisms which can provide a vital window onto events that happened before human records began.

Currently, the ice cores are extracted one metre at a time, drilling the glacier's surface, performing a first visual analysis of the core before they are prepared for shipping in containers that are usually 10cm (4in) wide. This process is repeated hundreds of times as the researchers drill deeper and deeper to capture older ice layers, sometimes reaching extreme depths of 900m (2,953ft). As the researchers dig deeper, each metre of ice has been more compressed by the weight of the layers above, meaning they store chemicals and other particles accumulated across a longer period. 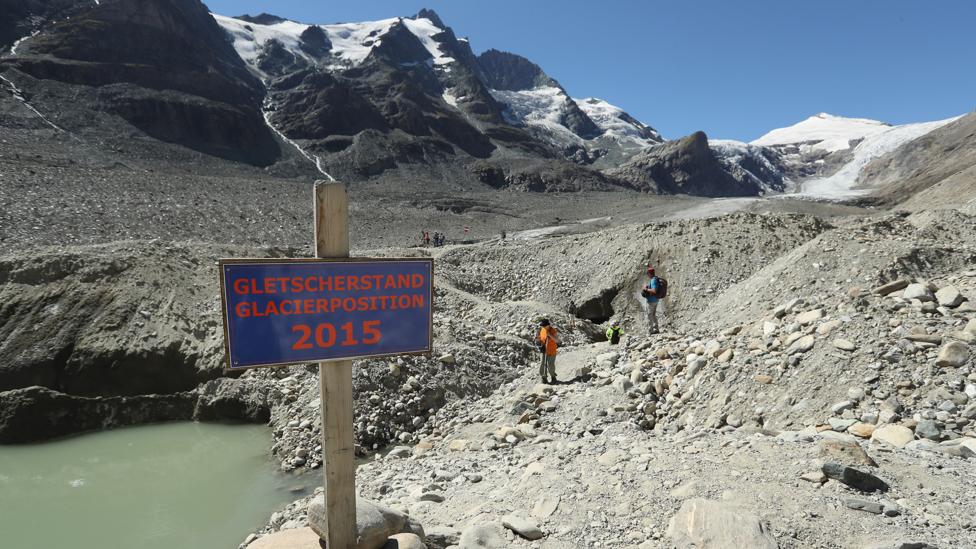 Mountain glaciers around the world have been retreating due to climate change and many are expected to lose a third of their ice over the next century (Credit: Getty)

Once in the lab, the cores are then cleaned and samples are slowly melted in a controlled environment, so the glaciologists can analyse the water to identify metals or gases such as carbon dioxide.

“The ice also works as a paleothermometer,” says Burgay. “It records the temperatures of the environment where a certain snow cover fell at any point in time.”

Using this information, the researchers can reconstruct the evolution of the Earth's climate over millennia, providing valuable information that can be used by scientists to model climate change. The machines in Burgay's lab, for example, are currently looking for iron traces in 6,000-year-old ice from a core extracted in Greenland. The minute levels of metal can provide clues about ancient volcanic activity that spewed metallic dust into the atmosphere.

After cleaning, the remaining cores are prepared for long term storage in the repository. 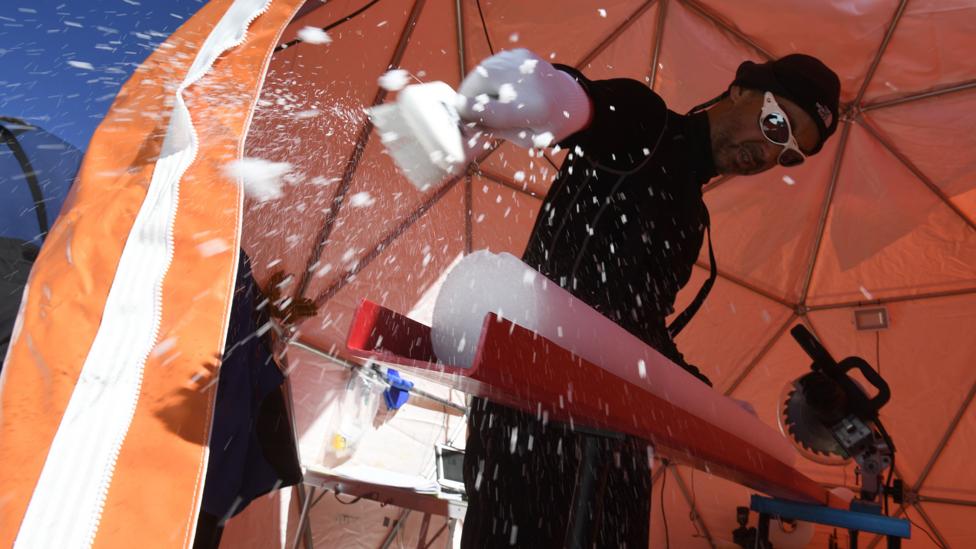 The cores are removed one metre at a time before being prepared for transport down the mountain to a laboratory (Credit: Getty)

"One may argue that ice cores would be safe in a commercial fridge in Venice or Paris," Barbante says. "But we are not thinking short term. We can't predict whether 200 years down the line somebody will still be able to pay for the electricity bill." History shows how conflict, shifting research priorities and natural disasters make it difficult to predict the future of any long-term scientific endeavour, he says.

It has led the scientists to look for a more permanent solution.

"Antarctica is the safest place to store the samples," says Barbante, "First, because it's a natural fridge, with annual average temperatures hovering around -50C, and also because it doesn't belong to any given country. It's the only region designated to peaceful scientific endeavours."

Signed in 1959 and entered into force in 1961, the Antarctic Treaty brings together 53 countries active in the region, stipulating that the territory ‘shall be used for peaceful purposes only’ and ‘scientific observations and results from Antarctica shall be exchanged and made freely available.’ 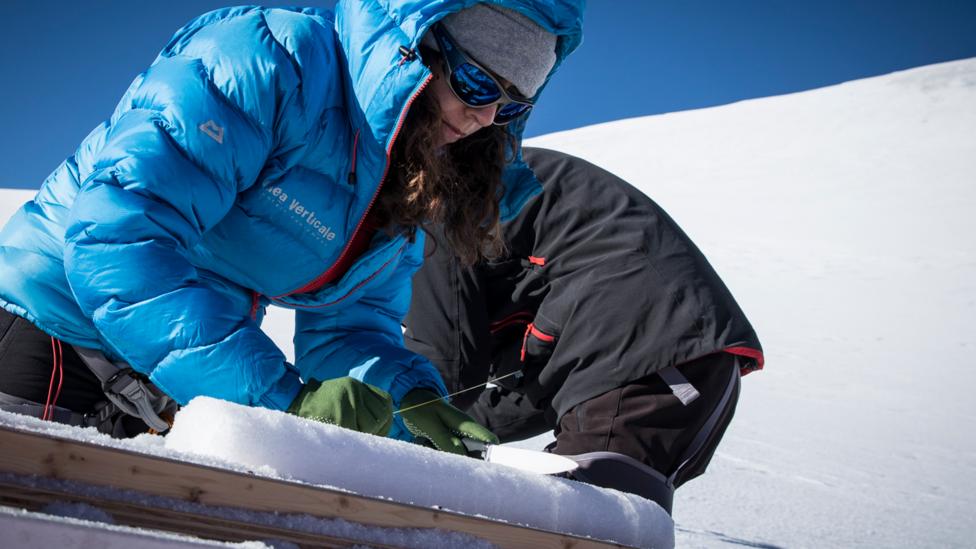 Trapped inside the glacier ice are bubbles of gas, dust and even bacteria that hold a wealth of information about the past (Credit: Ca' Foscari University of Venice)

For as long as the treaty stands, says Bess Koffmann, a geologist at the University of Maine in the US, Antarctica will remain a safe place. But the treaty is up for renegotiation in 30 years time. (Read more about how archaeological discoveries could shape the continent’s future).

"There is always the risk that one country might refuse to sign the agreement in order to take advantage of the region's untapped resources, such as coal and other minerals," warns Koffmann. 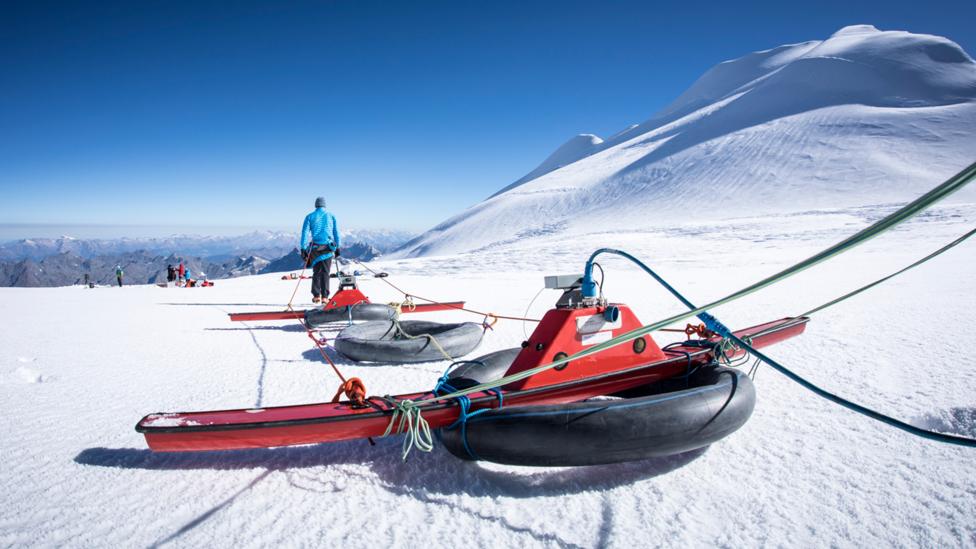 On some glaciers the ice cores and equipment has to be transported by foot, but the scientists have found ways to lighten the load (Credit: Ca' Foscari University of Venice)

Creating a sanctuary for today's disappearing ice could also deliver benefits that are unimaginable today. As new tools and technologies become available, it might enable scientists to unlock new windows into our planet’s past, and perhaps even study ancient virus and bacteria preserved in ice.

"Technologies have evolved rapidly over the past few decades, and we are now making measurements that we didn't even dream of 30 or 40 years ago," says Koffmann.

We are losing our glaciers very rapidly, and without archiving the information they contain, we’re simply not giving ourselves the chance to understand changes that may happen in the future – Emma Smith

One day, Barbante says, imaging techniques will be so advanced that "we will be able to analyse the cores without even touching them”.

But in order to get to this point it's essential to build repository while we still can, says Emma Smith, a glaciologist and geophysicist at the Alfred Wegener Institute in Bremerhaven, Germany. "We are losing our glaciers very rapidly, and without archiving the information they contain, we're simply not giving ourselves the chance to understand changes that may happen in the future."

Scientists often focus on polar ice because that's where they can uncover the oldest records, Smith says. "But if you look at regional ice cores from smaller glaciers you can observe changes on a much smaller scale." This means creating a detailed picture of local climates that would be missed by analysing polar ice alone. 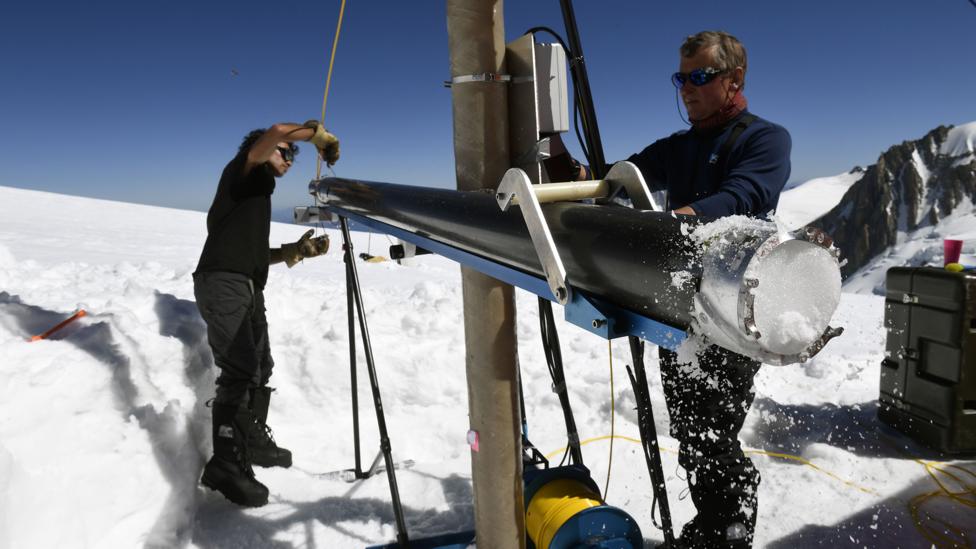 The further the teams drill down into the glaciers, the more compact the ice becomes and the more time is packed into the metre-long samples (Credit: Getty)

The Ice Memory team hope to have a wide range of samples ready to be stored in Antarctica by 2020, in a bespoke vault built near the French-Italian research station Concordia. The researchers plan to employ a method that has been successfully trialled in Greenland, which involves digging a trench and inserting an inflatable balloon that will be used as a mould for the cave.

"We then blow the snow we previously removed to create the trench back onto the structure, and wait for it to harden over a few days," Barbante explains. At that point, the balloon is deflated and can be easily removed. "This way we create a natural structure that is low cost and has no environmental impact." 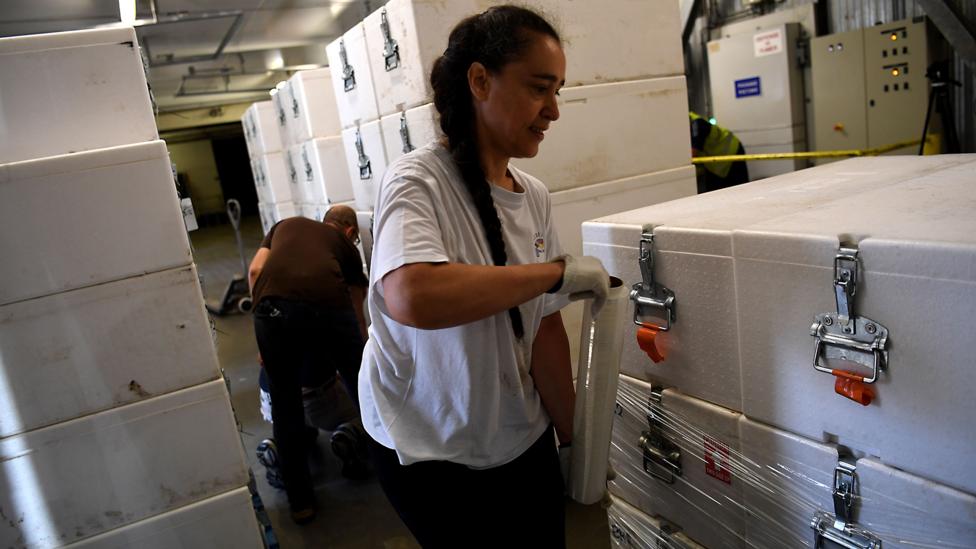 Once back at the laboratory, the ice cores are packaged into protective boxes and placed into cold storage (Credit: Getty)

Barbante concedes that after one or two decades the structure is likely to subside under the weight of further snow falling on top of it. "But the cores can be moved relatively easily to a new structure built the same way", he adds.

The project has already gained the support of Unesco, and Barbante says that an increasing number of teams, including those from Russia, the US and China are already collecting extra material during their independent expeditions, so they will be able to contribute to the project in future.

According to current projections, no matter what we do now to curb global emissions, many of the world’s glaciers have little hope of surviving beyond a few human generations, with some losing a third of their ice over the next century. Soon, these few hundreds of metres of ice cores may be all that’s left of many ancient tongues of ice.

The efforts of a few intrepid explorers venturing into the mountains to collect these cores are helping to ensure the secrets they contain will be available for future generations to unlock.

Did you enjoy this story? Then we have a favour to ask. Join your fellow readers and vote for us in the Webby Awards! It only takes a minute and helps support original, in-depth journalism. Thank you!