Loading
Will We Ever? | Robot
Will we ever have robot carers?
Share using EmailShare on TwitterShare on FacebookShare on Linkedin 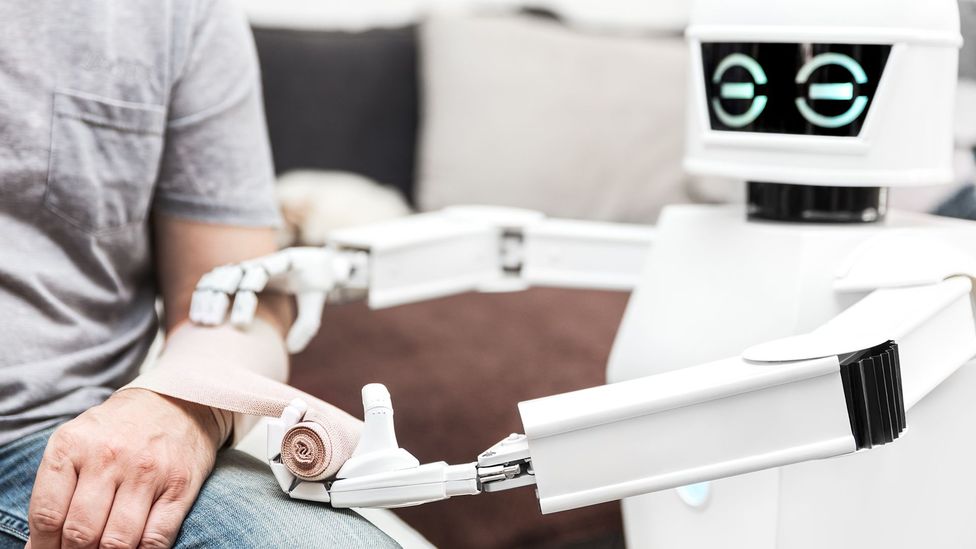 By Peter Ray Allison 22nd April 2019
Robots could be a way of caring for our ageing populations in the future. But what challenges have to be overcome?
F

Films like Robot and Frank and I, Robot, as well as animated television shows like The Jetsons, have portrayed a future where robotic servants undertake household chores, allowing families to spend more time together and for elderly people to remain independent for longer.

A future of robotic carers is closer than we may realise. Robotic vacuum cleaners and lawn mowers are already available while there has been a massive uptake of assistive technologies for elder care in Japan. Middlesex University’s robot Pepper recently appeared before a parliamentary select committee in the UK to answers questions about the role of robots in education.

Carer robots, on the other hand, are a relatively recent phenomenon. With people living longer there is a growing population of elderly people who will require assistance with their daily lives. However, a lack of available carers means we could have an adult-care crisis in the near future. Japan, for example, is facing a predicted shortfall of 370,000 caregivers by 2025.

Whilst the current assistive technologies are still a far cry from a future where our meals cooked for us and all household our chores are completed for us, they offer a tantalising glimpse of a possible future.

Most robots are currently extensively used in heavy industry and manufacturing, where dangerous and repetitive tasks are routinely undertaken by automated systems. However, these heavy-duty industrial robots are not designed to operate in the presence of people, as they move fast and are made from hard materials, which could potentially cause injuries.

Current collaborative robots, or cobots as they are otherwise known, are made with rigid joints and links. When working in close proximity to humans, their speed is inhibited to ensure they can safely interact with people. 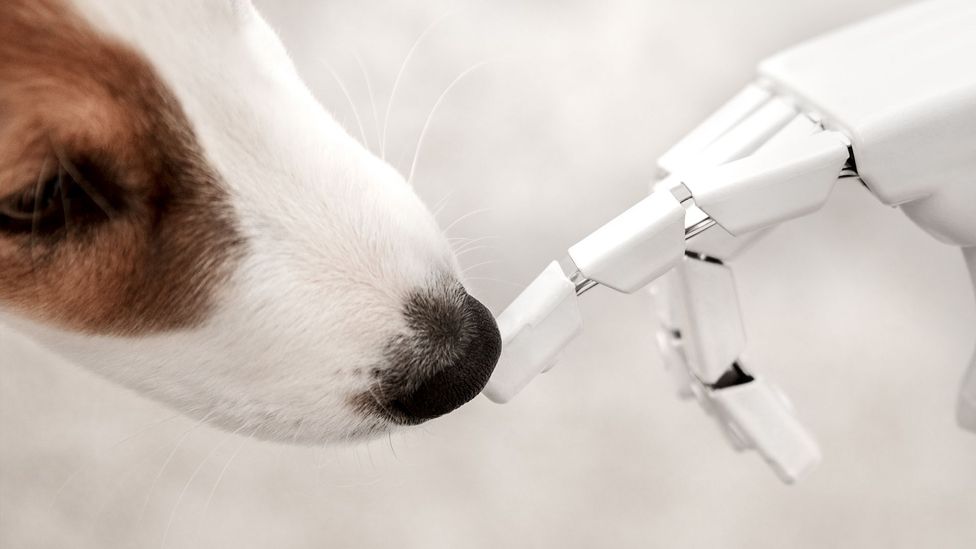 Could a robot one day feed your pet? (Credit: Getty Images)

However, the next generation of collaborative robots will be made from softer materials, such as rubber, silicon or fabric. “These robots are inherently safe due to the material properties they are made of,” says Helge Wurdemann, a roboticist at University College London. “These types of soft, stiffness-controllable robots are promising to achieve the accuracy and repeatability of current collaborative robots and at the same time ensure safe interaction with humans.”

One of the greatest challenges is that the navigation systems for human-interactive robots are still not yet fully developed. They work, to a degree, but can easily become confused, such as with robotic vacuum cleaners failing to return to their charging base. In simple laboratory conditions, robots can determine the best route to take, but a real-life environment, such as a home filled with tables, chairs and general clutter, is very different.

Robots also struggle with changes of surface and, like the dreaded Daleks from Doctor Who, stairs

“Many of these algorithms have been developed in the laboratory and are relatively simple compared to the level of clutter and human activity within a real home,” explains Nicola Bellotto, a computer scientist at University of Lincoln and the technical manager of Enrichme, a project attempting to build robots to help care for and monitor the elderly.

Robots also struggle with changes of surface and, like the dreaded Daleks from Doctor Who, stairs. In 2017 an autonomous security robot in Washington DC drowned itself after falling down steps into an office fountain. Operating safely in the presence of children and animals can also be a challenge, as demonstrated in 2016 when a security robot ran over a toddler at a shopping centre in Silicon Valley after the child ran towards it. 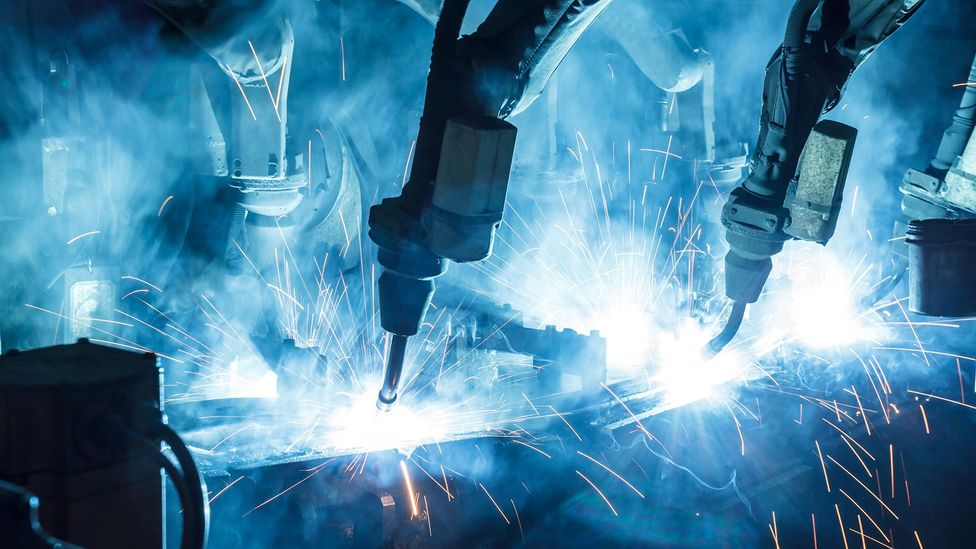 Many industrial robots are too rigid and inflexible to meet the demands of human interaction (Credit: Getty Images)

Coordination of movement in response to sensor information is another challenge in robotics, which in turns affects a robot’s ability to interact with the environment. Robots can struggle with tasks that most humans, and even dogs, would find quite simple, such as catching a ball.

This is due to the incredible number of factors that need to be considered, all of which can overwhelm an autonomous system and cause errors to occur. “From a machine-learning perspective, most of the decisions are easier to make than they are to carry out for a robot,” says Diane Cook co-director of the Artificial Intelligence Laboratory at Washington State University. “Some tasks that are mentally challenging for humans are simpler for robots, whilst some of the simple movements for humans are quite challenging for robots.”

Many modern-day robots are function-specific, such as robotic vacuum cleaners, rather than being multi-functional mechanoids

There is also the question of whether we want our robotic carers to look human. There is the concept of the uncanny valley – where objects that almost, but not quite, mimic human form can deter people from using them. Instead, like the robotic vacuum cleaners in our homes, robots could be aesthetically designed around their function.

“The more it looks like a human, the more that person receiving the care is going to resist the care provided by the robot,” says Cook. “A robot is only useful if the person being cared for accepts it.”

In some cases, a non-humanoid robot can be exactly what is needed. Robotic animals, such as Paro, are starting to be used as pets in care homes that do not allow animals or as additional companions for people suffering from dementia or have learning difficulties.

Many modern-day robots are function-specific, such as robotic vacuum cleaners, rather than being multi-functional mechanoids. Designing a robotic system to fulfil multiple functions can be challenging, especially if their tasks are not related. In the near-future at least, we are most likely to have multiple robot carers, all designed for different functions. However, this raises the problem of where would we store them all when they are not being used. 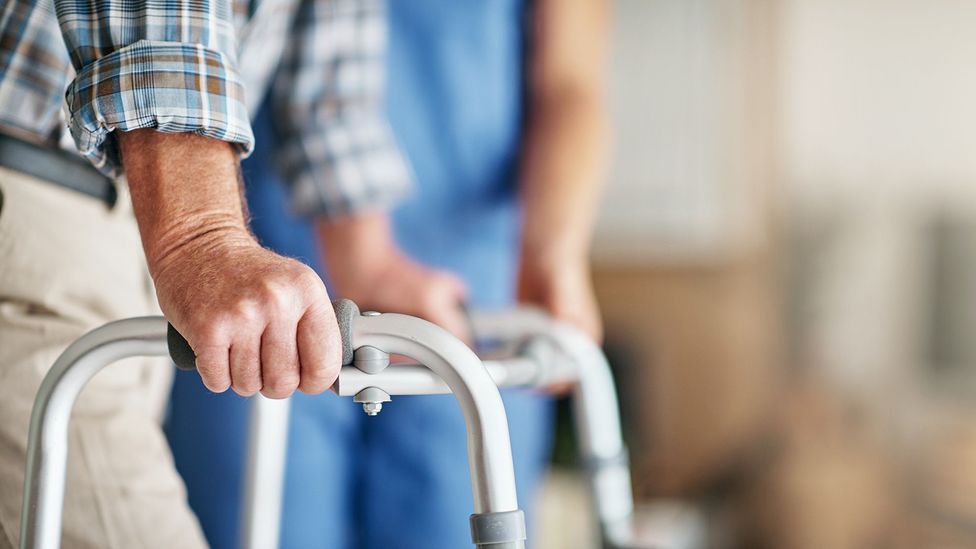 Co-oridinating a robot's movement around those of a possibly infirm human will be a real challenge (Credit: Getty Images)

There have also been recent developments in integrating smart home technology with robotic systems, to create homes with embedded automated systems. One such example is Chiron; a research project to develop a ceiling-mounted rail system that would allow an assistive robot to travel from room to room, using room-specific adapters for the environment they are in.

Given the inherent navigational and mobility challenges facing an autonomous robot in a home environment, this rail-mounted system offers a glimpse of how carer robots could be integrated into the very fabric of our homes. However, this system also presents its own challenges.

To enable a ceiling mounted rail-network, significant changes to the home would be required before the robot could operate there. Of course, bespoke care homes could be built with the rail system already installed. However, the significant costs that will come with rail-based installations would be a massive challenge to overcome.

Robots do not necessarily replace people’s jobs, but they can augment the way they work – Helen Dickinson

Ultimately, carer robots will augment rather than replace human carers, as robotics could never replicate the companionship that comes from a flesh-and-blood carer. Not even the most advanced simulation of a person by a robot could truly mimic a human being. 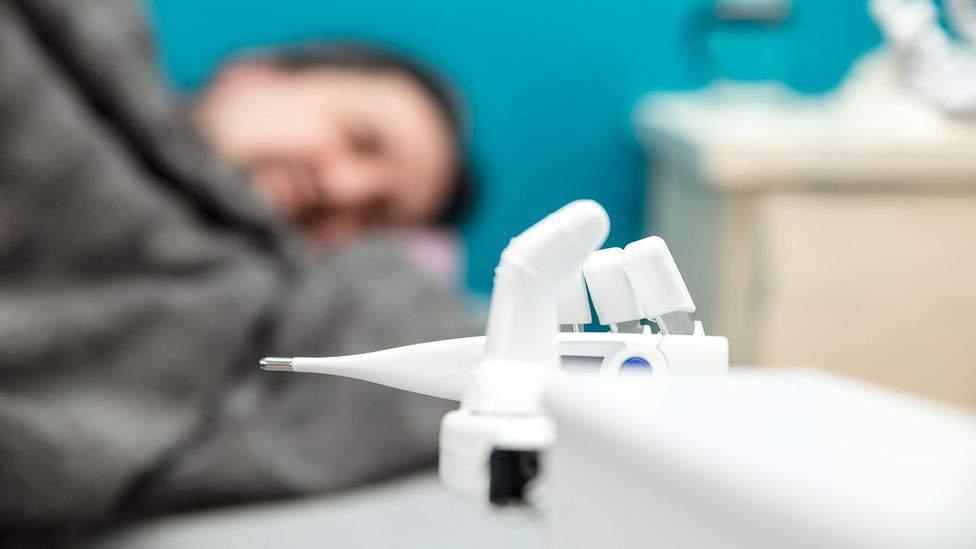 Robots could learn to do simple tasks that could free up human carers for more demanding roles (Credit: Getty Images)

Instead, having assistive technologies perform the physically demanding tasks would allow carers to operate more effectively. “Robots do not necessarily replace people’s jobs, but they can augment the way they work,” says Helen Dickinson, an expert in public services at the University of New South Wales. “It isn’t just passing on the most physical jobs, although there certainly is interest in having robots do tasks that require patience and repetition, where people get run down and compassion fatigue can be a factor.”

It is entirely possible that we will, one day, have assistive technologies in the home, but the more advanced systems will not be here for some time, or how they are portrayed in fiction. Instead, our homes themselves could become our carers, with robotic units becoming an extension of the home. Thus, the robot uprising could be reduced to them simply refusing to do the dishes.