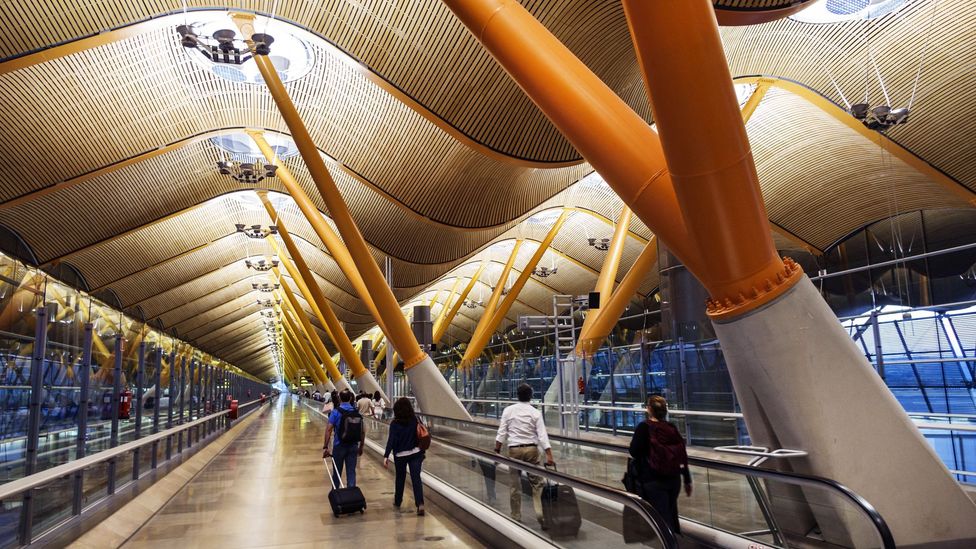 By Addison Nugent 1st May 2019
From a terminal’s colours to the security queue, here’s how airports are designed to keep travellers calm, quiet – and ready to shop.
I

In 1995, French anthropologist Marc Auge categorised the airport as a “non-place”. Found the world over, non-places are devoid of identity – uniform structures (think Starbucks or McDonalds) that remain the same no matter where they are. By his definition airports are architectural machines, designed with the express purpose of moving people efficiently from one place to another.

And, like a Starbucks or McDonalds, every aspect of an airport’s structure and layout is strategically designed – because although an airport is a “non-place”, it nonetheless is profoundly unique on a psychological level. Once you enter, you forfeit your anonymity, handing over government-issued identification and agreeing to security searches. To a certain degree, you could argue that you give up your free will as you’re corralled through an unfamiliar environment to your final gate. 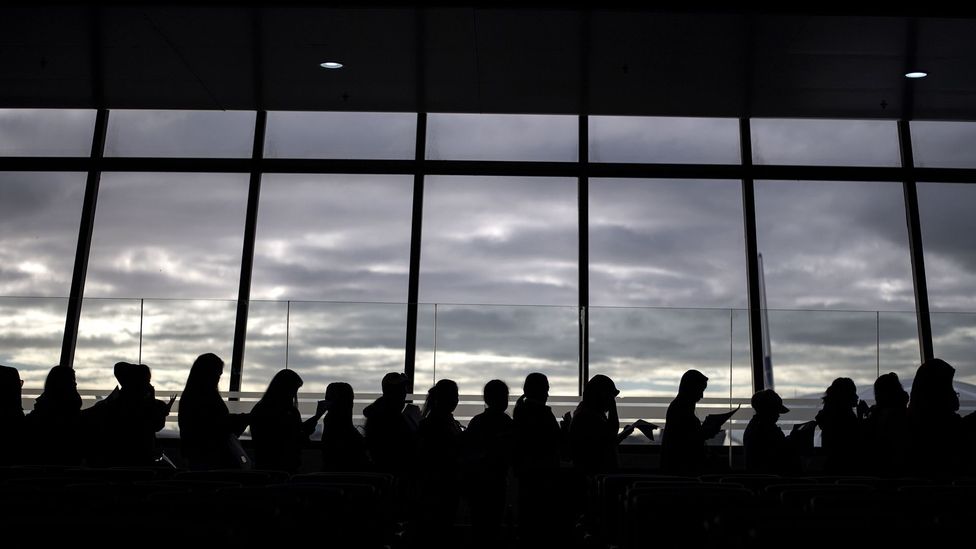 Reassuring passengers about this subconscious fear, not to mention about the stress caused by delayed flights, lost luggage or even the mere idea of airplane travel, is important. So is encouraging people to follow the rules and heed authority. To accomplish both of these tasks, airport designers the world over use subtle (and not so subtle) cues.

One main cue is a process called “wayfinding”: visual suggestions that herd passengers quickly and efficiently to their gates without them realising that they are being herded. “The perfect airport would be one where you would naturally be guided by the surroundings,” says Alejandro Puebla, senior airport planner at civil engineering firm Jacobs. For example, the colours and shapes of signs often differ from terminal to terminal, the carpeting patterns change, and large art pieces serve as distinctive place markers for orientation. If ever you’re walking through an airport and suddenly sense that you are going the wrong way, you’re probably responding to subconscious wayfinding cues.

You might also like:
• How flying messes with your mind
• The hacks that make air travel less painful
• The border guards you can’t win over with a smile

More stressful even than the idea of going to the wrong terminal, however, is probably the security process. And it’s only become more so. In the pre-9/11 era, the airport was, psychologically, a very different place. Security was still present, but the area past the snaking checkpoint contained a mixture of passengers and well-wishers seeing loved ones off at the gates.

Today, the airport terminal is more like a fortress containing only verified travellers who have willingly passed extensive security tests – hands swabbed for traces of plastic explosives, passing through enormous x-ray machines that may reveal their internal anatomy to strangers, answering probing questions about their luggage and handing over multiple forms of state-issued identification. (Find out more in our previous story on the new tech changing airport security). 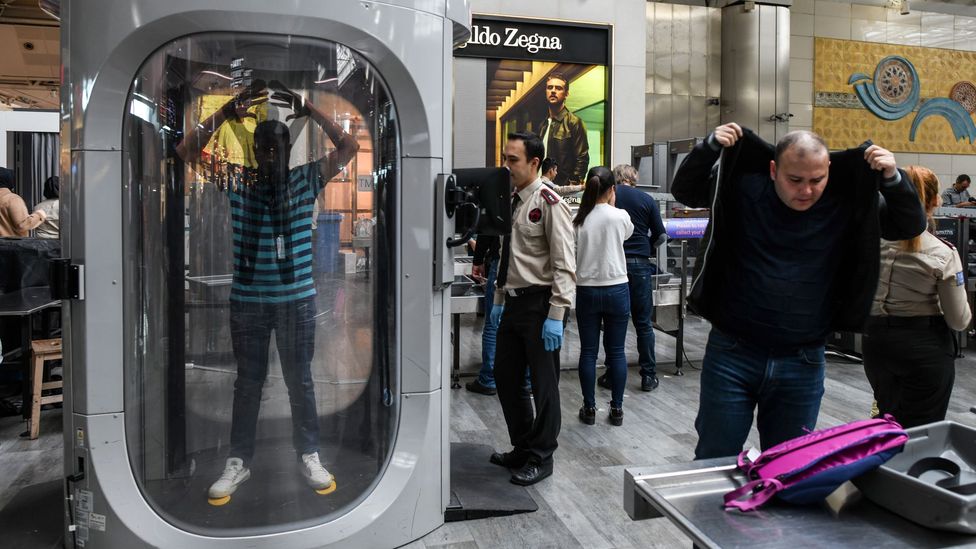 This turns passengers into “civil security workers who are ideally adept at the efficient submission of comprehensive surveillance”, writes Rachel Hall, author of the book The Transparent Traveler: The Performance and Culture of Airport Security. Whereas in the past passengers were simply customers, today they are also expected to act as civilian officers who extend the work of security workers beyond the checkpoint. This, too, is accomplished through (not so subtle) nudges. Signs throughout airports in the US continually remind passengers that they are “The Final Line of Defense Against Terrorists” and “If You See Something, Say Something”. “Now you fly and serve,” writes Hall. “In order to get the honor to serve you must perform voluntary transparency.”

The most striking aspect of our current culture of airport security is that it is largely ineffective. In the US in 2017, Homeland Security inspectors were able to clear an astounding 70% of TSA checkpoints while carrying facsimile guns, explosives and knives. This is a slight improvement from 2015 when 95% of nationwide airports failed the same tests. But nevertheless it is a testament to the fact that even the harshest-seeming airport security measures rarely make a difference. “Terrorism is rare, far rarer than many people think,” security expert Bruce Schneier puts it in his seminal essay Beyond Security Theater. “The best defences against [it] are... investigation, intelligence, and emergency response.” 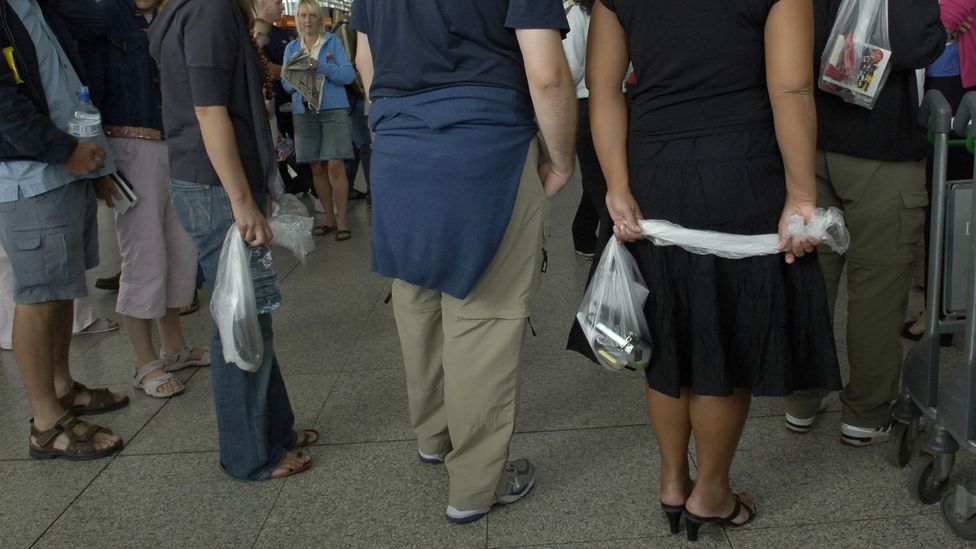 In 2006, a massive security operation uncovered an alleged plot to blow up passenger jets leaving UK airports, resulting in delays across the country (Credit: Elvis)

Unfortunately, these responses to terrorism are largely invisible and do little to make passengers feel safe. This is where airport security theatre comes in. When a terrorist attack occurs, airport security attempts to reassure customers by creating new types of scans: think of how shoe removal began after the shoe bombing attempt in 2001 or liquid confiscation after the liquid explosive attempt in 2006. These measures feel reassuring, but ultimately do nothing to predict how a terrorist might adapt – they are simply visual responses to widely publicised attack scares.

So, as surprising as it may seem, the facial scans, random searches, and smattering of guardsmen wielding automatic weapons are there to keep you coming back to the airport, not drive you away. 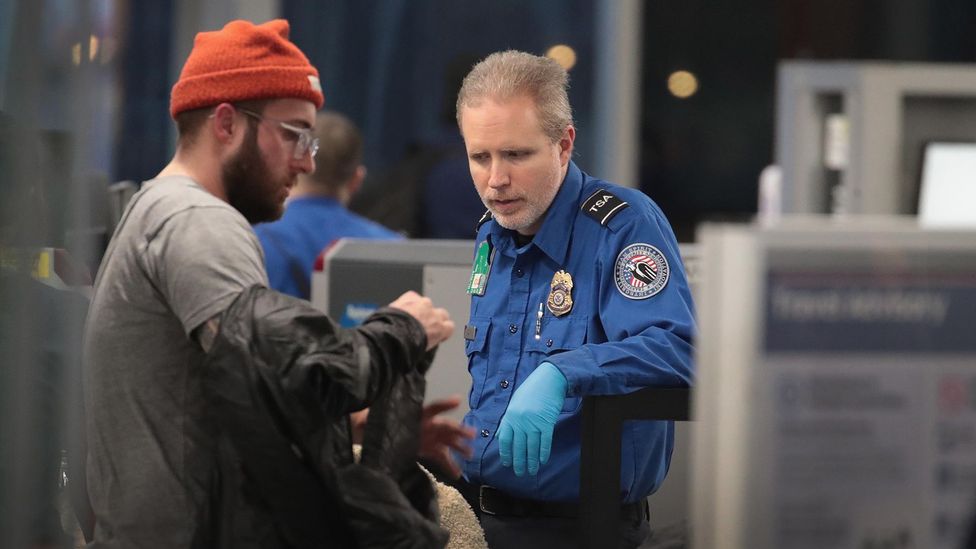 It is what lies just beyond the security circus that airport planners want you to feel safe enough to focus on: shopping.

Just after you collect your baggage from the scanners, you enter what is known in the airport design world as the “recomposure zone” – a place with benches and perhaps a coffee stand where you can sit and collect yourself. Meanwhile, wide views of the shops, restaurants, and concession stands greet you as you take your travel shampoo out of plastic bags and retie your shoelaces. This is a visual cue letting your brain know “it is time to shop”. According to InterVISTAS, an airport design consulting firm, it is at this point that the passenger transforms from stressed-out traveller to “valuable customer”. 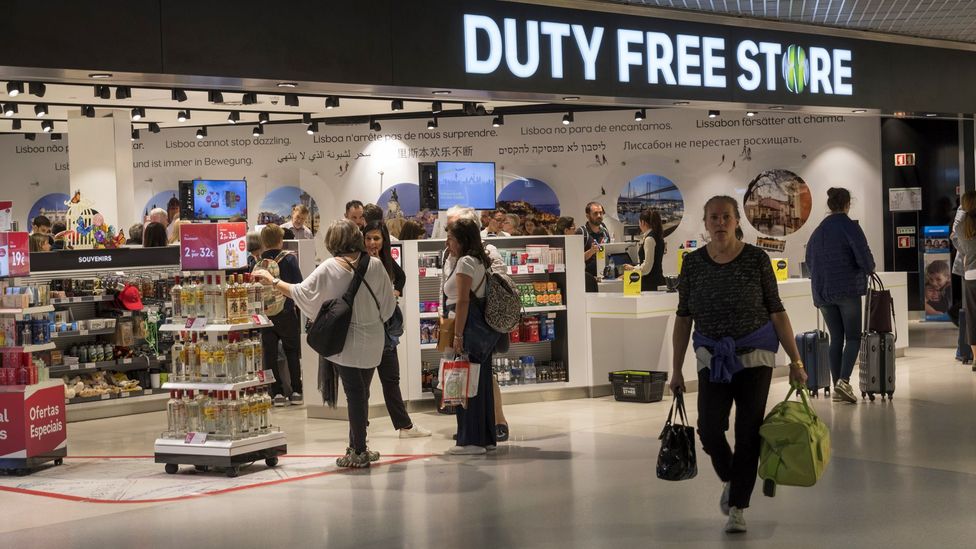 Once they’re through security, a traveller is seen as having changed from stressed-out traveller to ‘valuable customer’ (Credit: Getty Images)

It is only the first in a slew of shopping “cues” that the passenger receives as they make their way to the gate. The primary shopping area is always placed directly between the security checkpoint and the gate, forcing passengers to pass through it before getting on the plane.

Many terminal walkways also curve to the right because the majority of the human population is right-handed and therefore tend to look more in that direction. More shops are therefore placed on the right-hand side, allowing passengers to unconsciously browse as they make their way to their gate.

So much thought is put into airport shopping for the simple reason that air travellers are the perfect customers. Passengers have time to kill and no place else to go, they can afford to fly and therefore have disposable income, and – after completing the stressful tasks of getting to the airport on time, checking in, and passing through security – they are most likely in a self-indulgent mood. 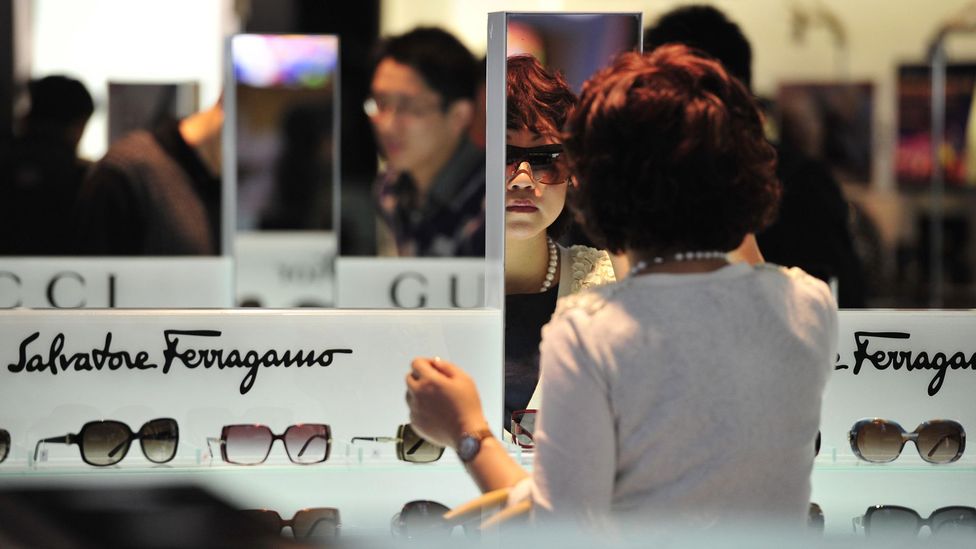 After completing the stressful tasks of getting to the airport and passing through security, passengers are often in a self-indulgent mood (Credit: Getty Images)

This mood lasts for roughly an hour, known in the airport design business as “the golden hour”. And airports want to do everything they can to capitalise on it. For example, says Puebla, some airports such as Gatwick and Heathrow only tell you which gate to go to 25 minutes before departure to maximise shopping time.

Integral to passengers feeling up to a bit of shopping – not to mention to keep panics, meltdowns or any other kind of disruption at bay – is encouraging calmness. One way is to give passengers-turned-customers a sense of control. "When we're in an airport and feel that we have a reasonable amount of control over our physical environment, our psychological wellbeing gets a boost,” explains environmental psychologist and editor of Research Design Connections Sally Augustin. “Reasonable amounts of control mean that we have a couple of options of types of places to sit, the opportunity to sit in sunlight or outside it, etc." Another example is flight information directories, which are frequent and highly visible. 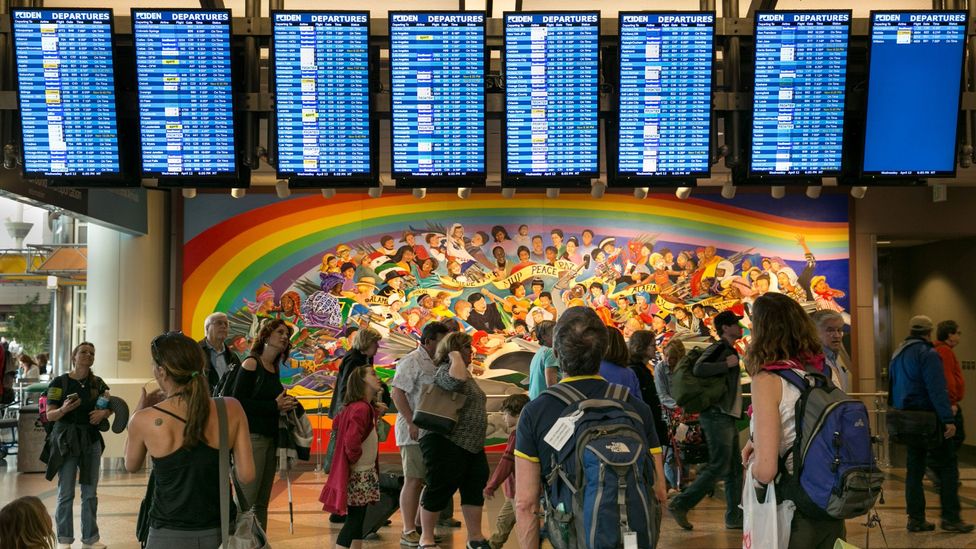 Flight information directories aren’t just helpful – they give us a sense of control (Credit: Getty Images)

But any sense of control we may feel in airports stands in stark contrast to the reality that we are, in fact, a captive audience. And perhaps nothing shows that more than one current trend: airports have become so successful at turning passengers into customers, some are now destinations in themselves. Some airports, like Changi in Singapore and Incheon in South Korea, now feature movie cinemas. Denver International has an ice skating rink; Stockholm’s Arlanda Airport, a fully functioning wedding chapel.

The future of the airport is, in airport design lingo, the “aerotropolis” – a new urban form geared towards global travel, one that features temporary living quarters for an increasingly nomadic workforce and all the amenities of self-contained city. The aerotropolis creates something out of nothing, transforming the “non-place” airport into a place, perhaps, of its own.