Apollo’s multi-day missions meant astronauts needed good quality food. But how do you cook a meal in space when you don’t have a stove or even hot water?

170: Weight of breakfast steaks eaten by astronauts, in grams

Every Nasa astronaut since Alan Shepard in 1961 has been given a hearty breakfast before blast-off. All the pre-flight Apollo meals were specially prepared for nutrition, calories and – crucially – were what doctors refer to as "low residue". In other words, low-fibre meals that wouldn’t have astronauts needing the toilet too soon after lift-off.

Early missions also limited coffee intake before launch, because of its diuretic properties. Shepard’s Mercury flight, for instance, was only 15 minutes so doctors figured that he could avoid urinating until splashdown. Unfortunately, they did not account for countdown delays.

“They put Alan Shepard on top of his rocket without a way to take a leak,” says reporter Jay Barbree, who was commentating on the mission for US TV channel NBC. “After two hours, he starts complaining and desperately asks for permission to wet his suit – finally they gave him permission.” The astronaut is relieved but the medical sensors go crazy.

Astronauts flying in the Apollo spacecraft used personal urine collection devices – like condoms – which were connected to a disposal system, which ejected the waste from a port on the side of the spacecraft.

Solid waste involved using plastic bags and most astronauts tried to avoid going to the toilet for as long as possible. The first to crack during Apollo 7 was Walt Cunningham.

“It was hard to get everything working just right,” he tells me. “You can catch everything but after that you had the get some pills loose from inside the bag and you spend your time mixing the pills up with whatever you had there – it was not terribly fun.”

The first American to eat a meal in space was John Glenn. During his five-hour flight, he tested out a tube – a bit like a toothpaste tube – of apple puree, proving that people could swallow and digest food in weightlessness.

For the two-man Gemini missions of the mid-1960s, astronauts were allocated 2,500 calories a day and consumed plastic packs of freeze-dried foods produced by the Whirlpool Corporation (the home appliance company). Freeze-drying involved cooking the foods, quickly freezing them and then slowly warming them in a vacuum chamber to remove the ice crystals formed by the freezing process. 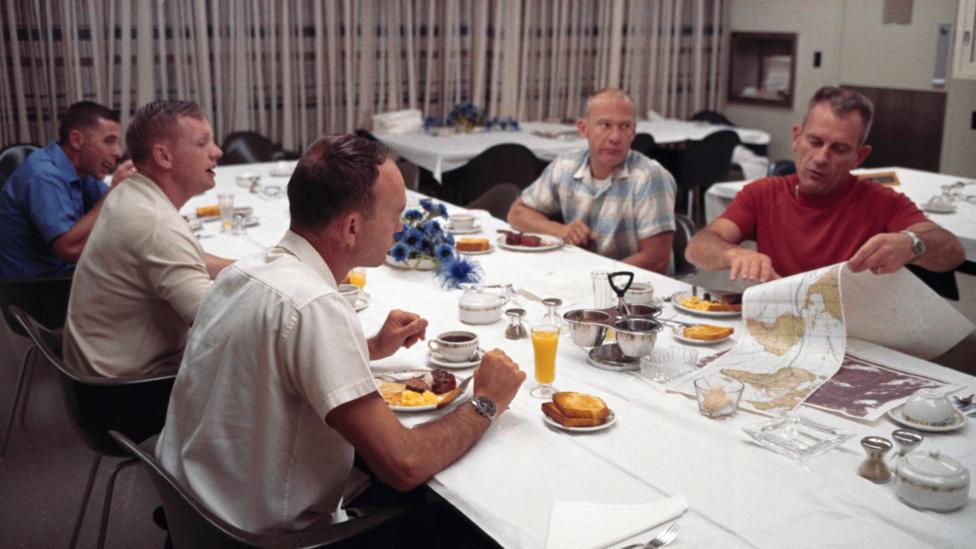 The astronauts squirted water through a nozzle to rehydrate the foods and kneaded the resulting paste into some sort of gloop. The meals were tastier than the tube food on Mercury, and included such delights as beef and gravy, but the water was cold, which made them often less than appetizing.

During the first Gemini mission – Gemini 3 in 1965 – John Young created a minor scandal and the only blemish on his exemplary astronaut career, by smuggling a corned beef sandwich on board. What started as a joke threatened to cause a serious problem with the spacecraft, with fears that crumbs would interfere with the spacecraft circuitry.

Not only were the foods tastier, the water gun – supplied from the spacecraft fuel cells – ran hot as well as cold

During the Apollo missions – when the astronauts could do some limited exercise in the capsule and were exerting themselves on the Moon – Nasa nutritionists upped the calorie intake to 2,800.

Not only were the foods tastier, the water gun – supplied from the spacecraft fuel cells – ran hot as well as cold. And the meals didn’t only have to be sucked through a straw, the astronauts could even eat some of them with a spoon.

The pantry of the Apollo spacecraft was jammed with snacks. Along with six portions of pineapple fruit cake, there were packs of brownies, chocolate cake and jellied fruit candy. For the savoury palate, there were cheese crackers and BBQ beef bites. Apollo astronauts were even allocated 15 packs of chewing gum, containing four sticks in each.

A typical dinner during Apollo 17 consisted of a main of chicken and rice, followed by butterscotch pudding and ‘Graham Cracker cubes’. They could wash this all down with instant coffee, tea, cocoa or lemonade. 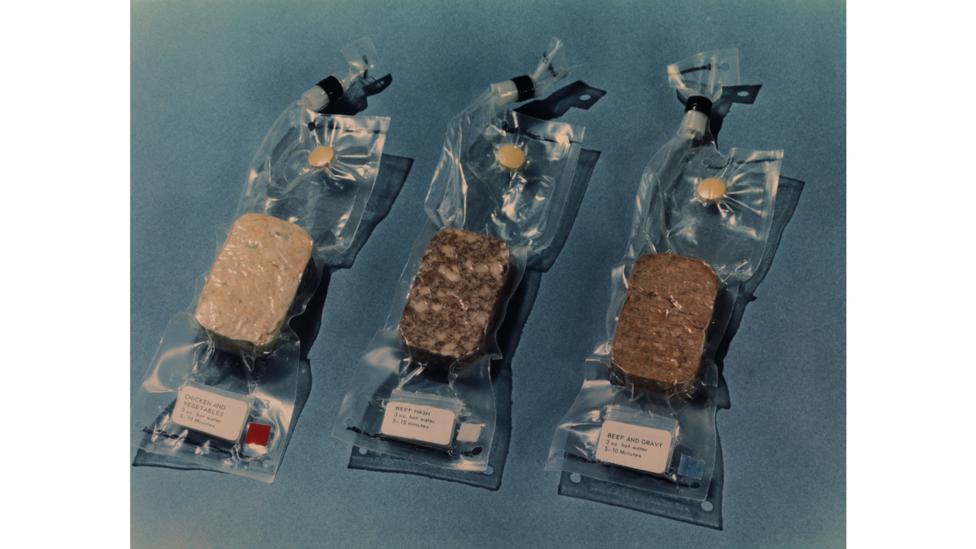 The Apollo astronauts' food was nourishing - but not very appetising (Credit: Getty Images)

Missions from Apollo 15 onwards also carried less appealing "nutrient defined food sticks". A precursor of today’s nutrition bars, these were positioned within the front of the astronauts’ helmets during their moonwalks alongside a drinking tube. This enabled them to eat and drink – either water or fruit-flavoured beverages – during their extended expeditions on the lunar surface.

Despite the varied diet and increased calories, almost every astronaut lost weight during the missions. Neil Armstrong shed 4kg (8.8lb) during his Apollo 11 flight. During Apollo 13, commander Jim Lovell lost 6kg (13.2lb) – partly because of dehydration due to water rationing.

Since Apollo, food in space has continued to improve. Today’s astronauts eat an almost normal diet although find themselves craving fresh fruit and vegetables – a rare treat available only after supply ships dock.

Christmas Day 1968, and the crew of Apollo 8 were on their back from the Moon. They had a special surprise ration package to unwrap from the head of the astronaut corps, Deke Slayton. Inside, a full Christmas meal – complete with turkey, gravy and cranberry sauce, and it didn’t even have to be rehydrated.

If anything had gone wrong, it would be blamed on the brandy so we brought it home – Deke Slayton

“It was a new type of food packaging that we hadn't experienced before,” says mission commander Frank Borman. “We had our best meal on the flight on Christmas Day – I was really glad to experience turkey, gravy and all the works.”

But Slayton had also packed another surprise. “He also smuggled on board for us three shots of brandy,” says Borman. “But we didn't drink that. 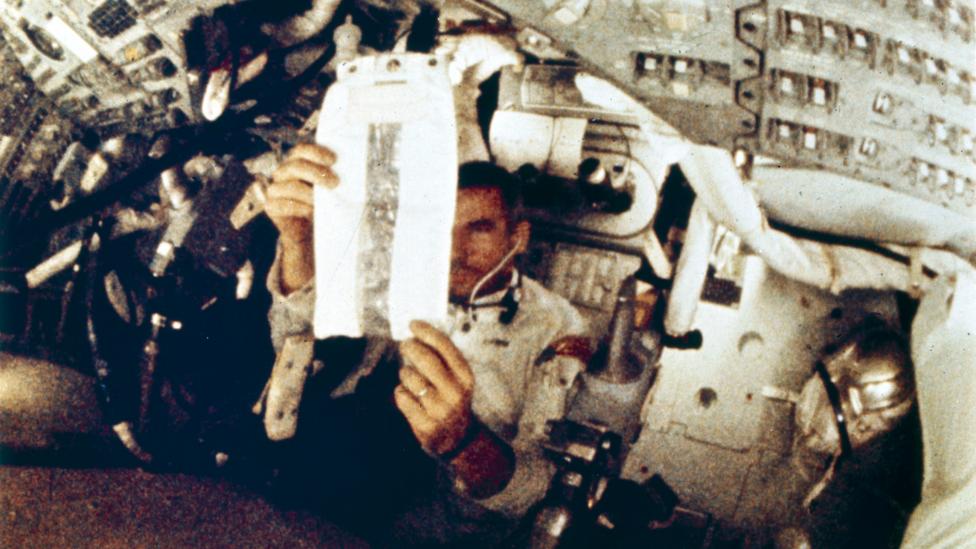 Without access to a stove, food had to be made palatable by adding cold water (Credit: Nasa/Getty Images)

“If anything had gone wrong, it would be blamed on the brandy so we brought it home,” he says. “I don't know what happened to mine – probably worth a lot of money now.”

Alcohol has been consumed in space – mostly in small quantities by Russian cosmonauts on their early space stations. It’s banned, however, on the International Space Station. Even a small amount could break the station’s complex water recovery system, which is fed with water from astronaut sweat and urine.

In the long list of benefits to mankind from the space programme, ready meals might perhaps be an unlikely contender. But without Apollo, the microwave ovens many of us have in our kitchens or the ready meals millions consume every day, might never have been developed. 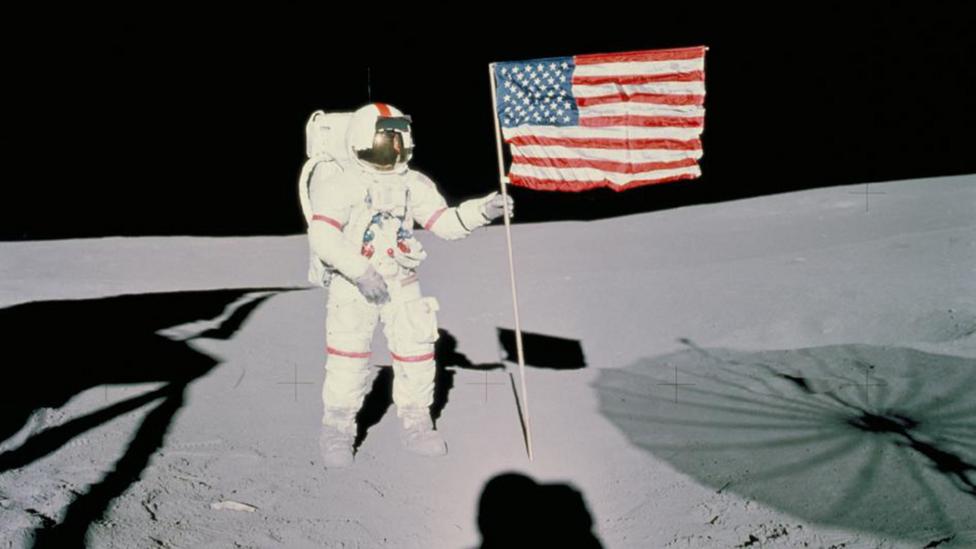 Nasa calculated that the Moonwalkers would need 2,800 calories per day (Credit: Nasa)

When Neil Armstrong, Buzz Aldrin and Michael Collins returned from the Moon and were winched aboard USS Hornet, they spent their first few days in the Mobile Quarantine Facility (MQF) to protect the world from any possible Moon bugs. Although the MQF was fitted with comfy chairs, bunks, a toilet and shower, it only had limited room for cooking.

With no room for a conventional oven or grill – and to minimise the dangers of fire – Nasa looked for an innovative solution.

“This is the original countertop microwave oven, developed for the Apollo programme,” says Bob Fish, a trustee of Hornet, now preserved as a museum in Oakland in California.

“Nasa went to Litton Industries who had developed giant walk-in microwave ovens and asked them to shrink it down so that it could be fit inside a place like this,” says Fish. “So, they shrunk it down, and the first time the guys tried it they put some eggs in there and they hit start – it just exploded the eggs because they hadn't shrunk down the power they only shrunk down the size.”

Once the astronauts had been air-lifted to Houston and transferred (still under quarantine) to the Lunar Receiving Laboratory, the food stepped-up a notch again. They ate freshly cooked food at tables covered with crisp white table linen.