Weather-related events are estimated to displace 143 million people by 2050 – but rising seas are already threatening tiny tropical nations. Can anything be done to help them?

The evidence of the climate crisis is now undeniable. But state responses to climate change often have social and political motivations, rather than addressing the realities of this threat.

There has been a backlash against this lack of impetus in recent times by groups such as Extinction Rebellion, which highlights the need for significant action by wealthy Global North states. These wealthy, industrialised nations – and about 100 corporations largely headquartered within them, according to one report – have been the largest drivers of climate change via fossil fuel emissions, while baulking at global agreements to provide meaningful climate aid to developing countries.

• The animals that will survive climate change
• Can oysters save Louisiana from disappearing under water?
• How brain biases prevent climate action

The idea of drowning or sinking islands has long existed as a way to describe future risks that small island states must confront. But the reality is that these threats affect life in such places today. Many small islands states have chosen to reintroduce previously unpopular resettlement and migration policies in the face of climate change.

This is the story of Kiritimati (pronounced Ki-ri-si-mas) in the mid-Pacific – the largest coral atoll in the world. A closer look at the story of this particular island sheds light on the issues facing those living in similar locations all around the world, and the inadequacy of current international policy. 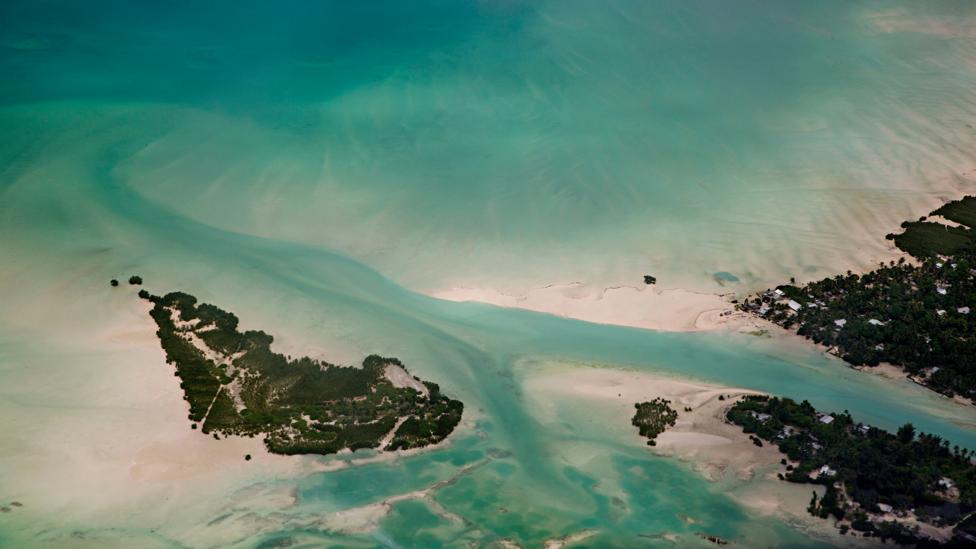 Kiritimati has a dark past of British colonialism and nuclear weapons testing. It gained independence from the UK on 12 July 1979, when the Republic of Kiribati was established to govern a group of 33 islands that straddle the equator in the area. Now, a complex threat is appearing over the horizon.

Raised no more than two metres above sea level at its highest point, Kiritimati is one of the most climate vulnerable inhabited islands on the planet. It is at the centre of the world, yet most people could not pinpoint it on a map, and know little about the rich culture and traditions of its people.

This culture may be set to disappear. One in seven of all relocations in Kiribati – whether between islands or internationally – are attributed to environmental change. And a 2016 UN report has shown that half of households have already been affected by sea level rise on Kiritimati. Rising sea levels also pose challenges to the storage of nuclear waste on small island states – a hangover from their colonial past.

Those who have moved become climate change refugees: people who have been forced to leave their home due to the effects of severe climate events and to rebuild their lives in other places, having lost their culture, community, and decision-making power.

This problem will only intensify. Intensifying storms and weather-related events have displaced an average of 24.1 million people every year around the world since 2008, and the World Bank estimates that another 143 million people will be displaced by 2050 in just three regions: sub-Saharan Africa, South Asia and Latin America.

On Kiritimati, a few mechanisms have been created to help islanders. For example, the Kiribati government has implemented a programme, “Migration with Dignity”, with the aim of creating a skilled workforce able to find good employment abroad. The government has also purchased 6,000 acres on Fiji in 2014 to try and ensure food security as the environment changes. 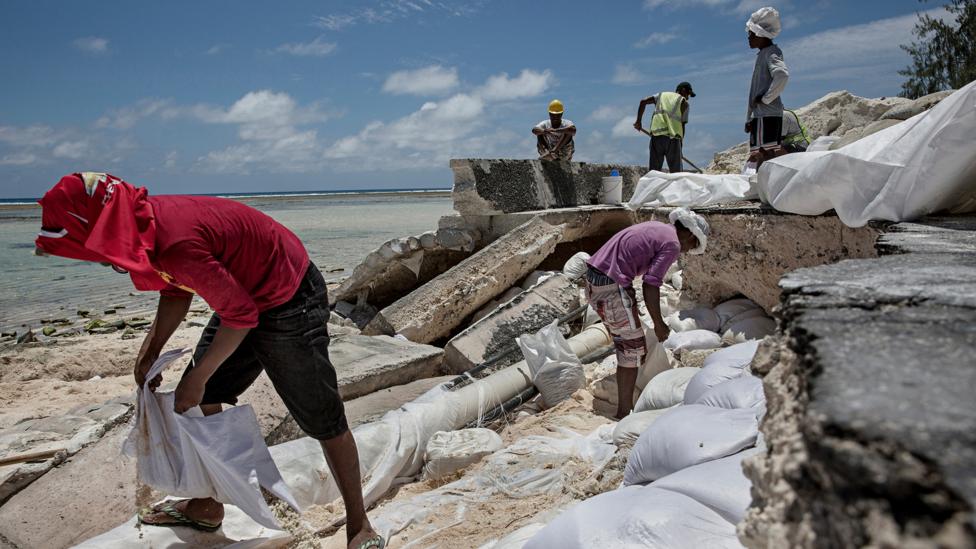 Locals regularly have to repair roads damaged by flooding on the islands in the Republic of Kiribati (Credit: Getty Images)

New Zealand has also created an annual opportunity lottery called the Pacific Access Ballot. This lottery is presented as a way for 75 Kiribati citizens per year to resettle in New Zealand. But quotas are reportedly not being filled. Understandably, people do not want to leave their homes, families and lives.

The World Bank and the UN, meanwhile, have argued that Australia and New Zealand should improve mobility for seasonal workers and allow open migration for citizens of Kiritimati, in light of climate change affects. But seasonal work is often menial and offers few prospects for a better life.

While well-intentioned international policy is predominantly focused simply on relocation, rather than providing adaptive capacity and long-term support, these options still do not offer true self-determination for the people of Kiritimati. They tend to commodify people, reducing their relocation to reemployment plans.

It also means that beneficial local projects, such as the new airport, a permanent housing programme and a new marine tourism strategy could soon become redundant. Realistic and affordable strategies to reclaim and maintain the island’s land are needed to prevent migration from becoming a necessity. (Learn about how a country can keep the sea at bay).

Encouraging the population to migrate is of course the option with the lowest costs. But we should not fall into the trap of thinking it is the only option. We don’t need to allow this island to drown.

This is not just a human issue – abandoning this island to the sea would also eventually condemn a bird species found nowhere else on Earth, the bokikokiko or Kiritimati reed warbler, to global extinction. Other small island states whose existence is threatened by rising sea levels are also home to species at risk of extinction. The Marshall Islands, for example, are home to the coconut crab, which can only be hunted and eaten by the local inhabitants. 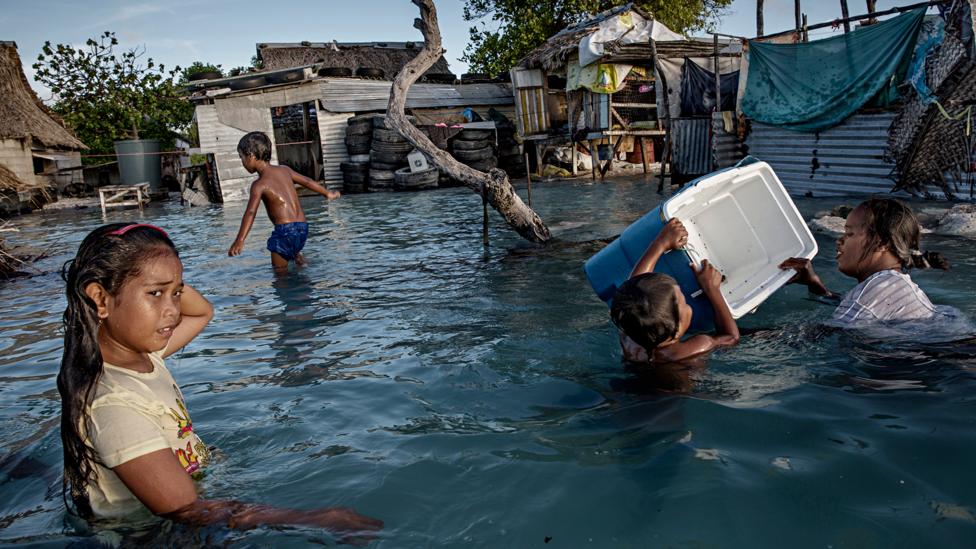 With an average age of 22, Kiribati's future generations will suffer most from the rising sea levels (Credit: Getty Images)

International aid could resolve many future problems and preserve this astonishing and beautiful place for humans, nonhuman animals and plants, but the lack of support from wealthy nations makes options like this difficult for residents of small island states to consider. Artificial islands have been created in Dubai – why not here? Many other hard engineering options exist, such as coastal fortification and land reclamation technologies. Such options could protect the homeland of the Kiritimati people while also enhancing the resilience of these places – if international aid were more readily and consistently available from the nations that have driven this climate crisis. (Read about Miami's fight against rising seas).

At the time of writing, there is neither an internationally recognised definition of the climate refugee, nor are they covered by the UN 1951 Refugee Convention. This maintains a protection gap, as environmental degradation is not defined as “persecution”. This is despite climate change arising largely due to the actions of industrialised nations, as well as their negligence in combating its stark consequences.

The UN Climate Action Summit on 23 September 2019 may begin to address some of these challenges. But for the millions of people who live in places that are threatened by climate change, the question is about environmental and climate justice. This question should be not just about whether climate change hazards are being addressed – but why those who want to continue to live on small island states often do not have the resources or autonomy to address climate change and other global challenges themselves.