Chile’s desiccated Atacama Desert was once considered a dead zone, but it hides great riches that could help us tackle a major threat to human health.

Staring out across the desolate landscape of Valle de la Luna, the idea seems counter-intuitive.

What could the world’s driest desert, home to some of the most extreme levels of ultraviolet radiation on Earth, have to do with fighting disease? But as Michael Goodfellow, a microbiologist at Newcastle University, explains, the Atacama Desert’s inhospitality is exactly what could make it useful to us.

“The premise was that since the conditions are so harsh in the Atacama Desert, organisms become adapted to those conditions,” he says. Goodfellow hoped that if bacteria had managed to survive in such a hostile environment, they would likely produce novel chemical structures which could have important medical applications.

In 2008, he was handed a soil sample taken from the desert’s hyper-arid core, parts of which are thought to have experienced virtually no rainfall for millions of years and were once considered beyond the dry limit for life. “Quite frankly, we didn’t expect to isolate anything,” Goodfellow admits. But to his surprise, he was able to grow a diverse population of bacteria from the sample, sparking a decade of research into the desert’s microbial fauna. 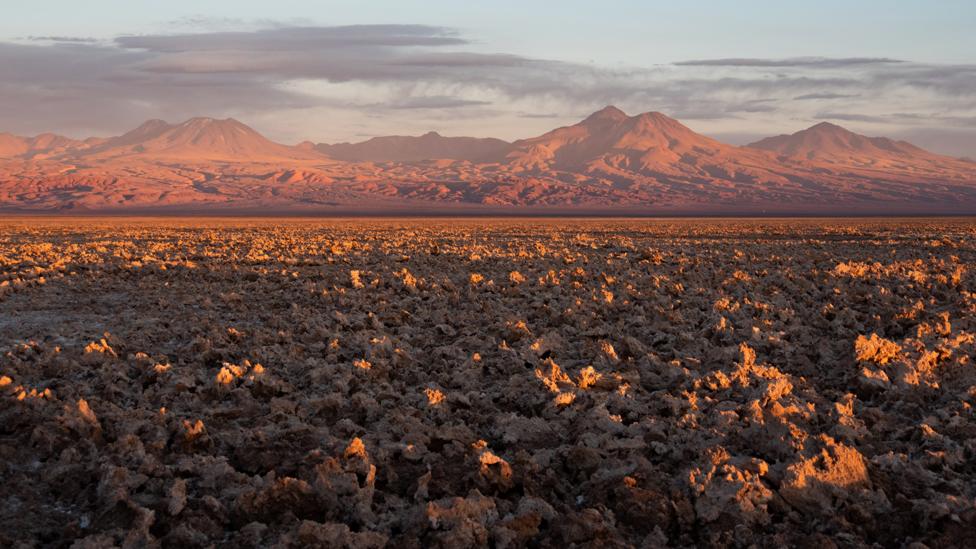 New species of bacteria are being unearthed in the Atacama desert that could help us fight back against the spread of drug resistant infections (Credit: Tom Garmeson)

It was the type of bacteria living in the Atacama that proved particularly exciting: a spore-producing phylum named actinobacteria. In microbiology circles, actinobacteria are renowned for their ability to secrete organic chemical compounds known as secondary metabolites, which help them fend off rival microbes.

Take streptomyces griseus, for example, a species of actinobacteria you might find in a handful of garden soil. A sample of streptomyces, when placed in a colony of mycobacterium tuberculosis, will release a chemical which stops its bacterial neighbours from growing the proteins they need to survive. When scientists at Rutgers University managed to isolate this chemical in 1944, they had chanced upon the first antibiotic treatment for tuberculosis, saving countless lives in the process.

A total of 46 new molecules have been isolated from Atacama bacteria so far, many of which show antibiotic, antiviral or anticancer properties

The new species of desert actinobacteria studied by Goodfellow and others have proven to be capable chemists themselves. A 2018 review counted a total of 46 new molecules that have been isolated from the Atacama strains so far, many of which show antibiotic, antiviral or anticancer properties. While Goodfellow stresses that there aren’t any solid drug leads yet, the results show the desert is a promising place to search for antibiotics.

Life at the edge

The Atacama is a prime example of what scientists have dubbed the “extremobiosphere” – areas of the world where factors such as high aridity, UV radiation, pH or pressure have pushed life to the limit. Recent years have seen researchers scour the globe for ever more hostile habitats, where they have invariably found hardy colonies of bacteria surviving against the odds.

In 1998, a Japanese submersible brought back barophilic bacteria from sediments in the Mariana Trench, 11,000m (36,000ft) below sea level. These bacteria are able to thrive at pressures 700 times greater than those at the surface. In 2009, geomicrobiologist Jill Mikucki announced the discovery of a population of microbes living beneath 400m of glacial ice in Antarctica, which have survived for millions of years by sapping energy from iron deposits. Whether they are making their home on a freshly erupted Icelandic volcano or lying dormant for millennia in Siberian permafrost, bacteria truly have colonised the world. 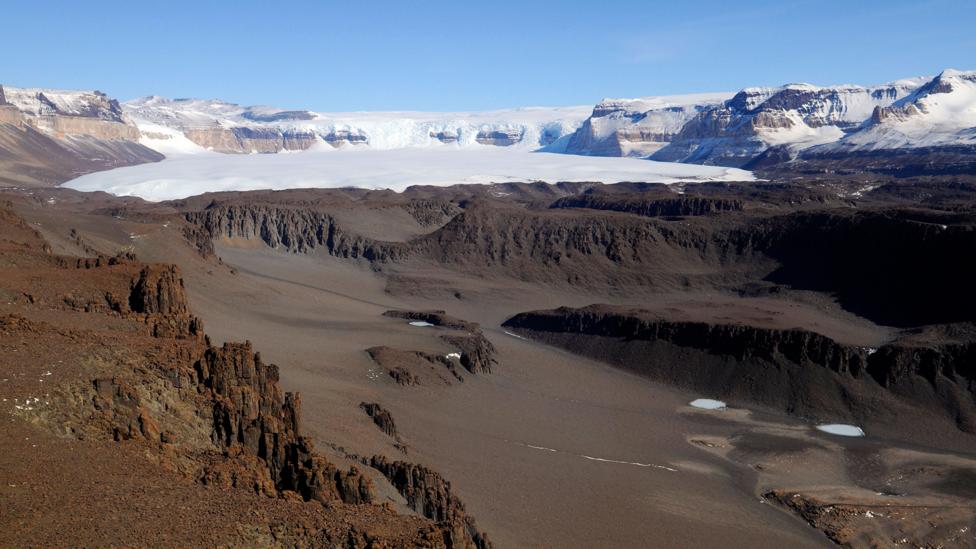 Parts of the McMurdo Dry Valleys in Antarctica have not seen rain for centuries yet scientists are still finding bacteria flourishing in this harsh landscape (Credit: Alamy)

This body of exploratory research has reshaped our understanding of the limits for life, teaching us about the ingenious ways in which bacteria have evolved to tolerate their surroundings. But it is perhaps the looming spectre of antibiotic resistance that provides the most pressing reason to explore extreme ecosystems.

Superbugs – pathogens which have learnt how to shrug off our antibiotic assaults – are already thought to be responsible for hundreds of thousands of deaths worldwide each year. The World Health Organization describes them as “one of the biggest threats to global health, food security, and development today”. Making matters worse, just as our most trusted drugs began to fail, the end of the 20th century saw the pipeline for developing new antibiotics slow to a trickle.

While public health bodies around the globe plead with doctors, patients and farmers to use antibiotics responsibly to help stem the spread of superbugs, there is general agreement on the need for the development of new drugs. Sometimes, a potentially useful chemical can be found right in front of our noses – in 2016, German researchers discovered a previously unknown antibiotic in a human nostril which was capable of killing drug-resistant Staphylococcus aureus, otherwise known as MRSA. In other cases, entirely synthetic molecules can prove to be antibiotic hits.

But many scientists argue that we should also be exploring the natural world for novel biochemistry, an approach known as “bioprospecting”. Marcel Jaspars, a natural product chemist at the University of Aberdeen, is one such advocate. “70% to 75% of all antibiotics come from nature,” he notes. “It strikes me that we should be looking more deeply into how nature makes these molecules and how we can actually find antibiotic compounds.” 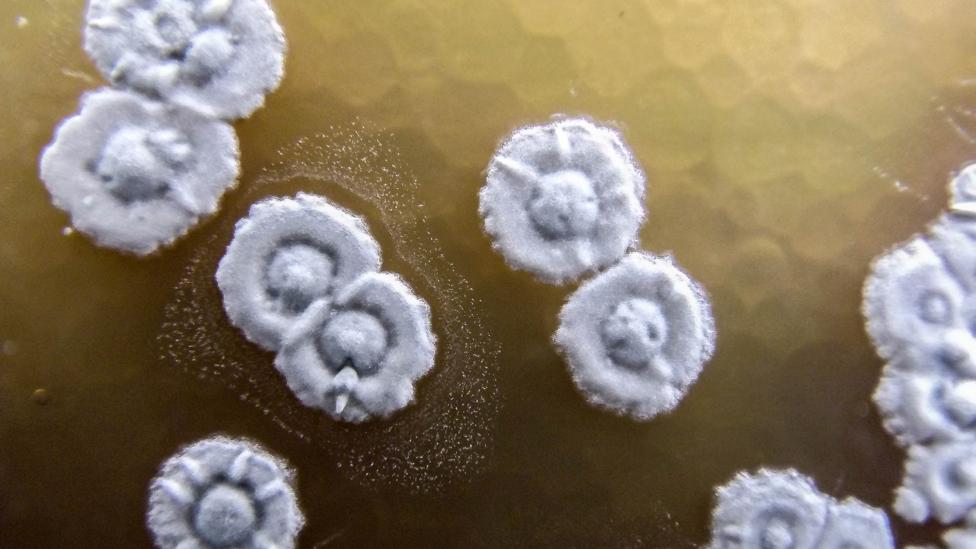 Bacteria isolated from desert soil in northern Chile could not only provide antibiotics but also new types of sun protection and industrial catalysts (Credit: Cristina Dorador)

And it is extreme, seemingly lifeless locations like the Atacama that seem to be the most promising places to find new weapons in the fight against antibiotic resistance. Advances in genetic sequencing have shown that the dry valleys of Antarctica, whose cold, arid soil is thought to be unique in the world, are home to much greater actinobacterial diversity than once thought. Exploration of the deepest ocean trenches has led to the discovery of a whole new class of chemicals, named “abyssomicins” in honour of the depths at which their bacterial creators were found. From the Merzouga sand dunes in southern Morocco to the Badain Jaran and Tengger deserts in China, microbiologists around the world are building an ever-growing library of compounds that display bioactive properties.

It is worth noting that many of the molecules extracted from these extreme bacteria will probably never become drugs. For every world-changing antibiotic like penicillin, scientists have unearthed countless chemical compounds which are either too toxic or simply not effective enough to be medically useful.

But according to Chilean microbiologist Cristina Dorador, an expert on the Atacama microbiome, there are many other reasons we should value her invisible research subjects. The desert bacteria’s ability to withstand high aridity and salinity might help plants grow in poor conditions, she says. And their tolerance to UV radiation could prove useful in the cosmetics industry as it looks to find ways of protecting human skin from damage by sunlight. 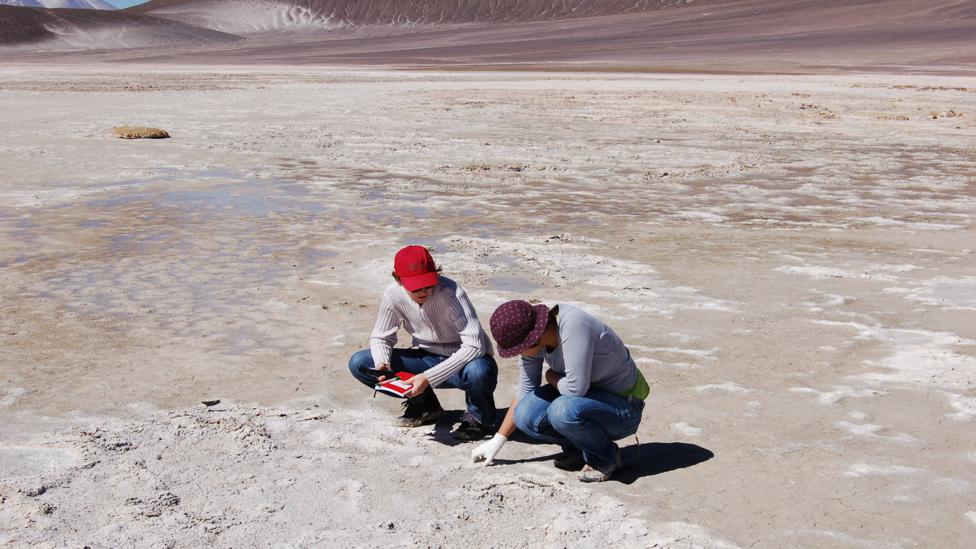 Deserts like the Atacama and other extreme environments have become the focus of scientists who are "bioprospecting" for potential new drugs (Credit: Cristina Dorador)

Researchers have also described the bacteria’s potential as industrial biocatalysts – Dorador suggests their ability to metabolise inorganic matter could be employed in the Atacama’s copper mining industry, which forms the backbone of the Chilean economy. She says the bacteria’s adaptation to their desert environment might make them especially suited to aiding in the extraction process.

And researchers may have only just scratched the surface of the Atacama’s potential. It is thought that only around 1% of all microorganisms in the natural world have been isolated and cultivated (grown in a lab), but new genetic sequencing techniques are helping researchers like Dorador to get a sense of what else is out there.

“We know that they are there, that we have great microbial diversity, but we don’t really know what their effects are, nor their potential,” she says. “There really is a whole microbial universe to discover in the Atacama Desert.”