With the digital equivalent of trowels and shovels, archaeologists are digging into the code of early video games to uncover long forgotten secrets that could have relevance today.

“You and your team of archaeologists have fallen into the ‘catacombs of the zombies’.” A miserable situation, to be sure. But this was the chilling trial that faced players of Entombed, an Atari 2600 game, according to the instruction manual.

The catacombs were an unforgiving place. A downward-scrolling, two-dimensional maze that players had to navigate expertly in order to evade the “clammy, deadly grip” of their zombie foes. An archaeologist’s nightmare.

Released in 1982, Entombed was far from a best-seller and today it’s largely forgotten. But recently, a computer scientist and a digital archaeologist decided to pull apart the game’s source code to investigate how it was made.

There was always something intriguing about Entombed, recalls John Aycock at the University of Calgary, in Alberta, Canada. And because it had fallen into obscurity, it hadn’t been pulled apart and analysed in depth before – one the main reasons Aycock and his co-author Tara Copplestone at the University of York, UK, were drawn to Entombed as a subject to study over the other 500 games made for the Atari 2600 console.

The pair are among a growing number of “video game archaeologists” who are unearthing long forgotten pieces of software and pulling them apart. Inside they are finding clues to how the early days of video gaming came about, but also secrets that can help modern programmers with some of the problems they are facing today. 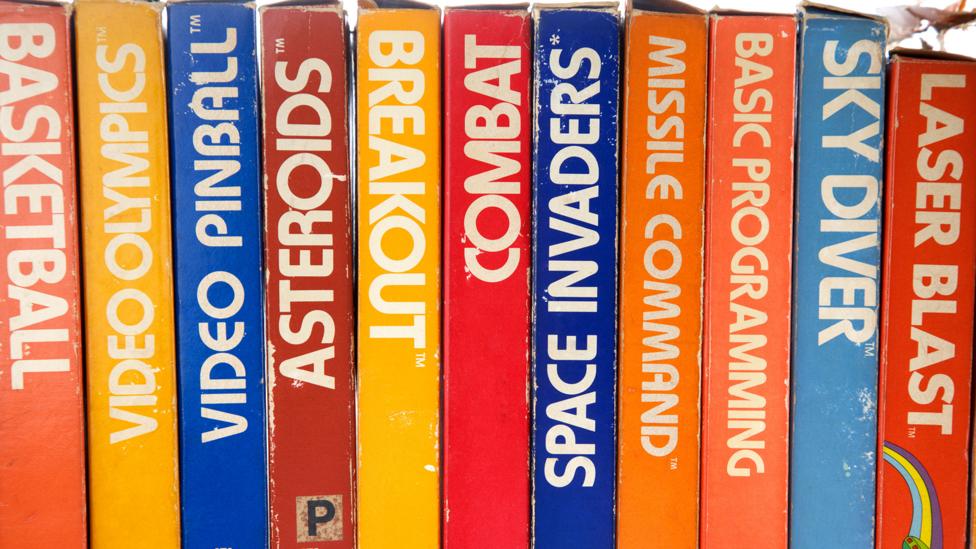 Many early video games have now become collectors items and change hands for hundreds, it not thousands of dollars (Credit: Alamy)

Like intrepid explorers of catacombs, Aycock and Copplestone sought curious relics inside Entombed. But they got more than they bargained for: they found a mystery bit of code they couldn’t explain. It seems the logic behind it has been lost forever.

Maze-navigating games were very common back in the late 1970s and early 1980s, but the method used to generate a maze varied, depending on the programmer. In the age of Atari, games had to be designed with incredible skill because the computer systems that ran them were so limited. (Read more about the mind of a maze-builder.)

Although the blocky, two dimensional mazes from entombed might look simple by the standards of today’s computer graphics, in 1982 you couldn’t just design a set of mazes, store them in the game and later display them on-screen – there wasn’t enough memory on the game cartridges for something like that. In many cases, mazes were generated “procedurally” – in other words, the game created them randomly on the fly, so players never actually traversed the same maze twice.

But how do you do get a computer program to avoid churning out a useless maze with too many walls, or an otherwise impenetrable floorplan?

As I dug into this maze algorithm, it became clear that this was something that seemed to be fairly unique to this maze game – John Aycock

Aycock understood the trickiness of the problem. He thought there was a good chance he’d find some clever process at work in the depths of Entombed.

“It was a very deep rabbit hole,” he recalls. “As I dug into this maze algorithm, it became clear that this was something that seemed to be fairly unique to this maze game.”

It turned out that the maze is generated in a sequence. The game needs to decide, as it draws each new square of the maze, whether it should draw a wall or a space for the game characters to move around in. Each square should therefore be “wall” or “no wall” – “1” or “0” in computer bits. The game’s algorithm decides this automatically by analysing a section of the maze. It uses a five-square tile that looks a little like a Tetris piece. This tile determines the nature of the next square in each row.

How? That’s the fascinating part. The fundamental logic that determines the next square is locked in a table of possible values written into the game’s code. Depending on the values of the five-square tile, the table tells the game to deposit either wall, no wall or a random choice between the two.

It seems straightforward, but the thing is, no-one can work out how the table was made.

Aycock and Copplestone have tried retro-engineering the table. They looked for patterns in the values to try and reveal how it was designed, but this was to no avail. Whatever the programmer did, it was a stroke of mild genius. Every time the game is played, a reliably navigable maze is pumped out. Were the table’s values random or even slightly different, the maze would likely fail to be drawn with a playable path through it. It just seems impossible to explain. (Read about how maths can help you solve mazes.) 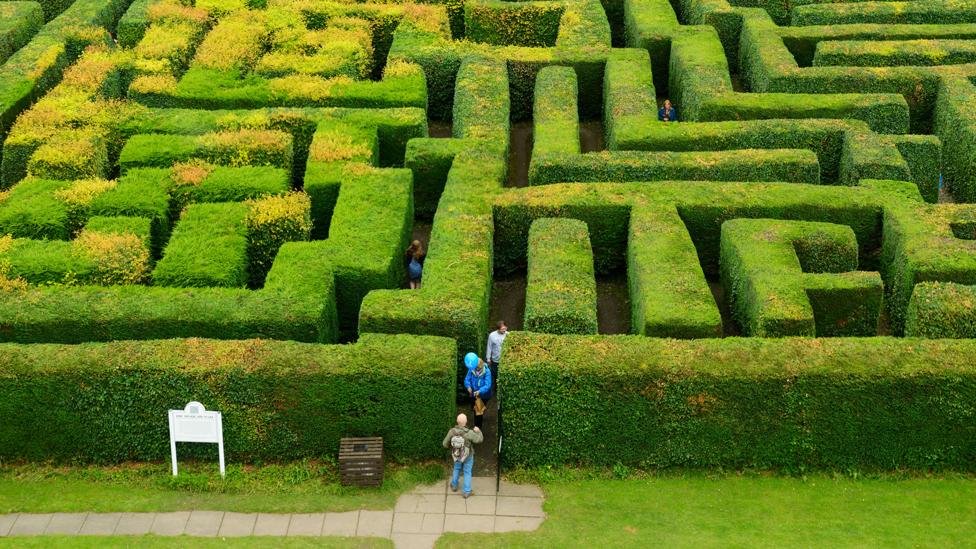 Mazes were a common component in early computer games but programmers found it was easier to generate them randomly rather than store them inside the game (Credit: Alamy)

“The abnormality of the table was just quite striking,” says Copplestone. She says this is an example of a classic conundrum in archaeology. “I think there’s this assumption that when we find things, we know what they are – if we pull a spearhead out of the ground, we know what it is,” she says. “[But] more often than not, we have no idea what’s happening.”

For Aycock, the as-yet unsolved mystery of the table lingers uncomfortably.

“The struggle I have as a scientist is, I think that there should be some logical way that this will all make sense and there really doesn’t seem to be.”

The best guess the pair have is that the programmer behind the maze algorithm must have manually fine-tuned the table values until the game worked as desired, but that still doesn’t really explain the logic behind it.

During their research, Aycock and Copplestone were able to interview one of the people involved in the game’s production, Steve Sidley.

He too remembered being confused by the table at the time. “I couldn’t unscramble it,” he told the researchers. And he claimed it had been the work of a programmer who developed it while not entirely sober: “He told me it came upon him when he was drunk and whacked out of his brain.” Aycock tried to contact the programmer in question but got no response.

Maybe no-one ever really understood the logic of the algorithm. But there it is, in a 1982 Atari game, posing a seemingly unanswerable question.

Andrew Reinhard, also at the University of York, writes about and practices video game archaeology. He says Aycock and Copplestone’s work on Entombed is another hint that there are many gems just waiting to be found in old games and old software, generally.

“I have a feeling that what has happened in Entombed has happened more frequently than not, it’s just we haven’t learned what games have this stuff,” he says.

The idea that archaeologists would be intrigued by video games from just a few decades ago may sound strange to some. We’re rather more used to seeing avid excavators dust off beautiful vases buried in mud for millennia, or similar treasures. But Reinhard points out that video games have become a major commercial enterprise and an important part of our culture. Game artefacts store up their own record of human history.

Digital archaeologists can dig for clues about the evolution of programming, unravel the workings of old technology and gain insights to the fading culture of the 20th Century – by excavating video games. Another programmer, Alexei Pepers, at Improbable Canada, even refers to retro games as archaeology “sites”. 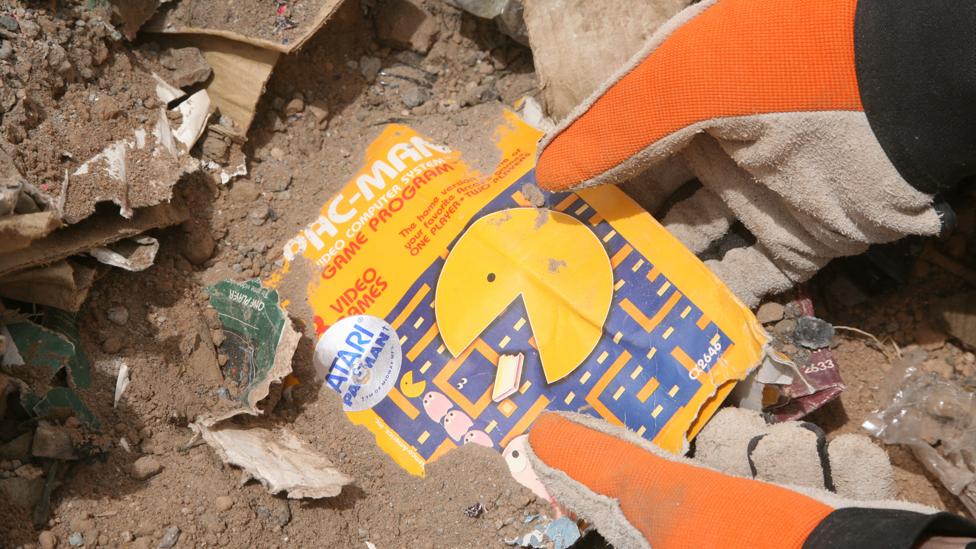 In 1983 Atari buried hundreds of thousands of games cartridges near to Alamogordo in New Mexico and they were unearthed in an excavation 30 years later (Credit: Andrew Reinhard)

She says it was heartening to hear that some early 1980s programmer may have inexplicably tweaked their code just to get Entombed running – that sort of trial-and-error fiddling is a well-known process in programming. “I found that so relatable, certainly in my own work,” says Pepers.

And uncovering the methods by which early game programmers overcame the technical constraints of the systems they worked with is not just academically interesting. It has relevance today.

Take the programming of virtual reality games and experiences, for example. You couldn’t imagine something more visually different from a two-dimensional Atari maze game. But the demands on the programmer are similar in nature.

“You’re very constrained technically because [a VR game] has to run at very high frame rates,” explains Pepers. “And you’re constrained in how the player can move and what they can do.”

By researching tricks and work-arounds from a former era, perhaps 21st Century programmers, pushing today’s technology to its limits, might learn something genuinely useful.

With Entombed, Aycock believes the maze algorithm they uncovered is a good example of how creative game programmers can get.

“From a modern perspective, I think it's also an interesting case study looking at how to solve a problem in extremely constrained time and (memory) space," he adds.

It is not just code that digital archaeologists comb through. In 1983, Atari buried 700,000 cartridges of video games at a landfill site in Alamogordo, New Mexico. It was a historic event in video game history – widely rumoured and discredited by some as an urban myth.

The titles the firm chose to bury had been widely panned and were proving impossible to sell. One, ET the Extra-Terrestrial, has been lampooned as the worst video game ever. 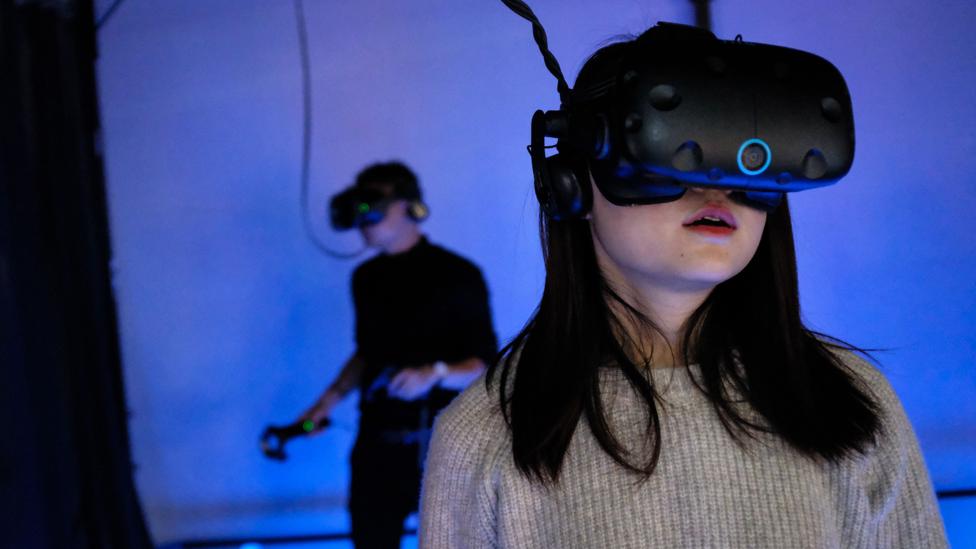 While none of the games initially seemed to be playable, one gamer bought a copy of Asteroids and, by cleaning up and reconnecting some of the electronics, was able to get it working again.

It may only have taken a few more decades in the New Mexico dust to make the cartridge completely unsalvageable. There’s a challenge, then, awaiting archaeologists who treat electronics as artefacts in the near future: time may be rapidly running out.

Video game archaeology is possibly quite urgent, in fact, because the actual physical form of mass-produced games is ephemeral. And the logic and know-how that went into programming those games can so easily be lost. That’s partly why computer archiving projects seek to store the digital form of old games, in an effort to preserve them long term.

But the preservation of video games is only the first step. The mystery maze table in Entombed reminds us that, even with a good record, fully understanding a game is another thing entirely. Maybe we’ll never quite grasp it. Entombed presents us – somewhat ironically – with a dead-end.

The instruction manual, to be fair, did warn us. “Before you know it,” it read, “you’ll be entombed!”