The theory of Dunbar’s number holds that we can only really maintain about 150 connections at once. But is the rule true in today’s world of social media?

If you’ve ever been romantically rejected by someone who just wanted to be friends, you may have delivered a version of this line: “I’ve got enough friends already.” Your implication, of course, being that people only have enough emotional bandwidth for a certain number of buddies.

It turns out that’s not just an excuse. There are well-defined limits to the number of friends and acquaintances the average person can retain. But the question about whether these limits are the same in today’s digital world – one in which it’s common to have social media profiles, or online forums, with thousands of followers – is more complicated.

According to British anthropologist Robin Dunbar, the “magic number” is 150. Dunbar became convinced that there was a ratio between brain sizes and group sizes through his studies of non-human primates. This ratio was mapped out using neuroimaging and observation of time spent on grooming, an important social behaviour of primates. Dunbar concluded that the size, relative to the body, of the neocortex – the part of the brain associated with cognition and language – is linked to the size of a cohesive social group. This ratio limits how much complexity a social system can handle.

You might also like:
• The numbers that can lead to disaster
• Is social media bad for you?
• The ‘3.5% rule’: How a small minority can change the world

Dunbar and his colleagues applied this basic principle to humans, examining historical, anthropological and contemporary psychological data about group sizes, including how big groups get before they split off or collapse. They found remarkable consistency around the number 150.

According to Dunbar and many researchers he influenced, this rule of 150 remains true for early hunter-gatherer societies as well as a surprising array of modern groupings: offices, communes, factories, residential campsites, military organisations, 11th Century English villages, even Christmas card lists. Exceed 150, and a network is unlikely to last long or cohere well. (One implication for the era of urbanisation may be that, to avoid alienation or tensions, city residents should find quasi-villages within their cities.) 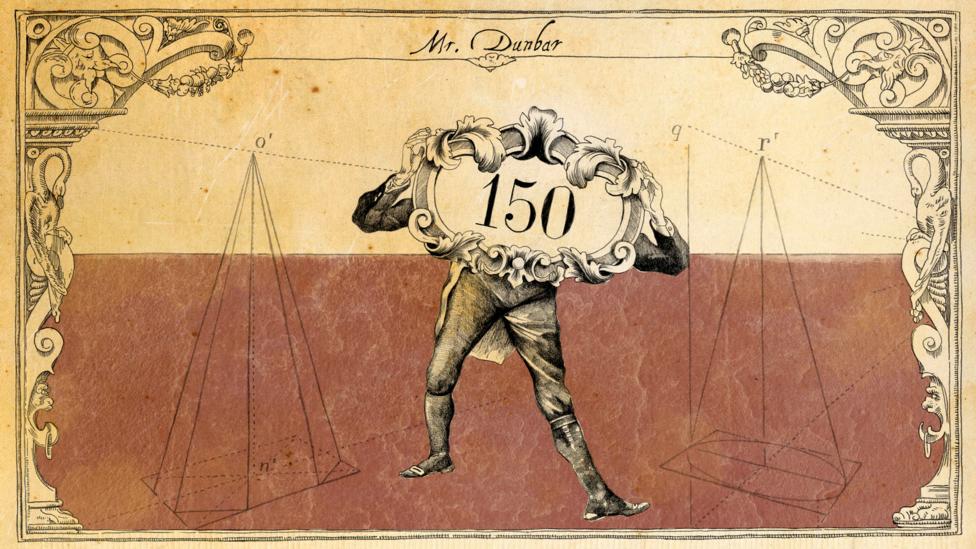 According to Dunbar’s theory, people can ‘handle’ up to about 150 relationships – whether in early hunter-gatherer societies or the modern workplace (Credit: Emmanuel Lafont)

Dunbar has a sense of humour about becoming nearly synonymous with a number – an unusual bragging right for a social scientist. “The odd thing about it is most people who have things named after them are actually dead,” he observes drily.

But 150 alone doesn’t tell the whole story. Other numbers are nested within the social brain hypothesis too.

According to the theory, the tightest circle has just five people – loved ones. That’s followed by successive layers of 15 (good friends), 50 (friends), 150 (meaningful contacts), 500 (acquaintances) and 1500 (people you can recognise). People migrate in and out of these layers, but the idea is that space has to be carved out for any new entrants.

Dunbar isn’t sure why these layers of numbers are all multiples of five, but says, “this number five does seem to be fundamental to monkeys and apes in general”.

Of course, all of these numbers really represent range. Extroverts tend to have a larger network and spread themselves more thinly across their friends, while introverts concentrate on a smaller pool of “thick” contacts. And women generally have slightly more contacts within the closest layers. 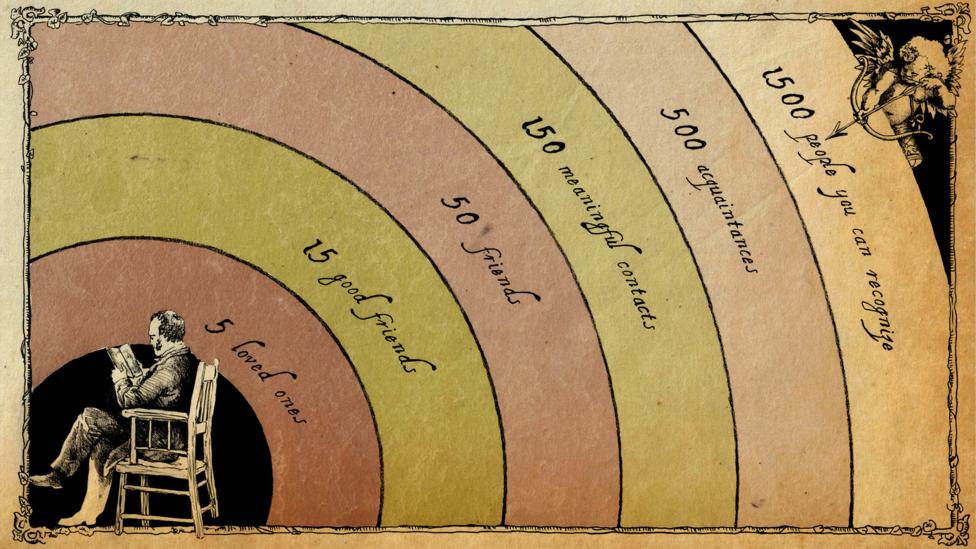 The most intimate circle is just five loved ones, reaching a maximum of 1500 people you can recognise (Credit: Emmanuel Lafont)

“What determines these layers in real life, in the face-to-face world… is the frequency at which you see people,” says Dunbar. “You’re having to make a decision every day about how you invest what time you have available for social interaction, and that’s limited.”

Certain organisations have taken these ideas to heart. The Swedish Tax Authority, for instance, has restructured their offices to stay within the 150-person threshold.

Not everyone subscribes to the social brain hypothesis. Some are sceptical about the possibility of deriving a magic number for social interaction at all.

Still, it can be a useful exercise for thinking through communities and evolution.

“Although there are many factors that can limit the number of relationships that we create and maintain, these studies help us to better understand… and measure such variables’ influence,” says Cristina Acedo Carmona, an anthropologist and economist at the University of León in Spain.

Among those who agree that a Dunbar-ian number can be found, some contest whether it’s 150. Research on varied social groups in the US suggests that their social networks cluster around 290 in size. And these numbers may be significantly skewed by outliers.

One argument is that the number of social connections isn’t normally distributed (or shaped like a bell curve), so a few people with massive numbers of contacts may be throwing off the average.

For instance, if someone is wealthy enough to hire assistants to partly manage their relationships – or to outsource some of the emotional labour to others – they might be less constrained by the number of relationships they can comfortably maintain. As in so many aspects of social life, the super-connected are the super-privileged. 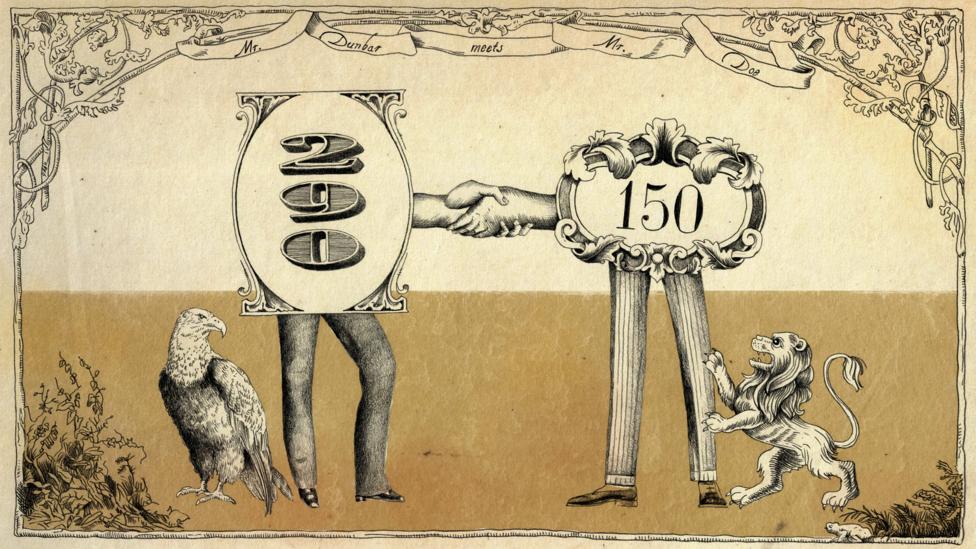 Some US social networks cluster around 290 in size, rather than 150 (Credit: Emmanuel Lafont)

There are also critiques of Dunbar’s number on methodological grounds. Primates’ brain sizes are influenced by other aspects besides social complexity: factors such as diet may explain them too. And a British-Dutch team has argued that even though the neocortex is finite, social capacity can be stretched in different cultural settings and with the aid of different technologies. One example is the use of extensive mobile phone contact lists by low-income Jamaicans. These lists, which involve careful cultivation of even casual relationships, often contain many more than 150 contacts.

Indeed, social capital can be especially important for people who don’t have other forms of capital, as suggested by Acedo Carmona’s comparative research on northern Ghana and Oaxaca, Mexico. High biological diversity, remote mountainous settings, and the influences of Spanish colonialism on ethnic identities have all contributed to Oaxaca’s small trust circles, largely consisting of nuclear relatives. But northern Ghana’s scarcer environmental resources have made inter-ethnic cooperation and larger trust circles more important for survival. Thus, “focusing on brain size and cognitive limitations may be overly simplistic”, Acedo Carmona stresses.

Dunbar’s number may be most applicable for premodern societies or for middle-income groups in contemporary Western societies. Research that supports it is skewed towards Weird (Western, educated, industrialised, rich and democratic) societies.

But even these are becoming more complicated, due to the way internet culture is transforming relationships.

One modern-day version of a cave-side campfire gathering is Slack, the email replacement app that’s been delighting workplace communications pros, and exhausting overworked employees, since 2013. And one person who’s taken advantage of Slack’s community-building possibilities is US digital designer Carly Ayres.

Several years ago Ayres created a Slack group for fellow designers, 100s Under 100. It now hosts 84 channels moderated by 14 admins, who are aiming to diversify the group behind its initial core of white US women.

Dunbar’s number makes intuitive sense to Ayres, given her observations of online communities. “I do think there’s some truth to the idea that there’s only really so much information you can keep in your head… so many avatars. The more you know about someone, I think the better that relationship is, but probably also limits the number of relationships you can have,” she says. 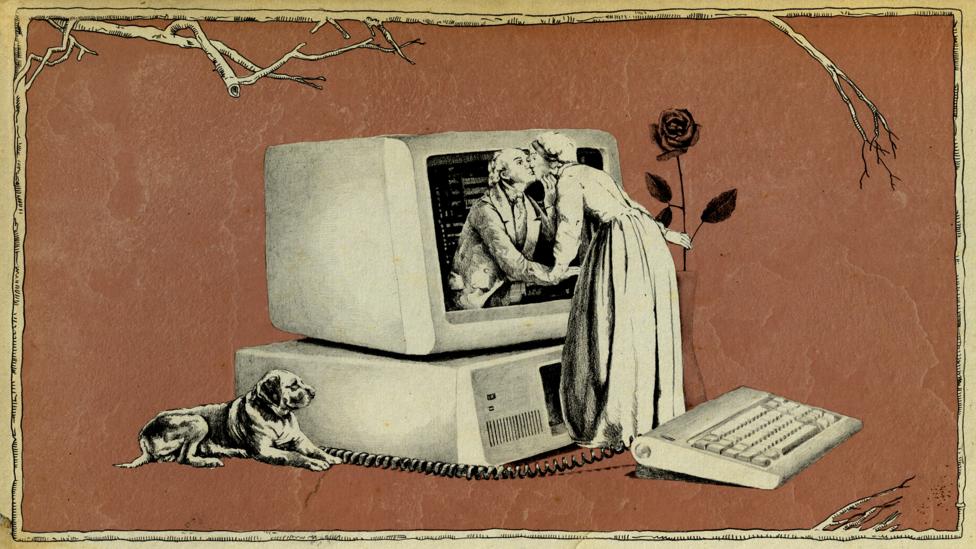 Even online, it’s easier to have stronger relationships when you have fewer of them (Credit: Emmanuel Lafont)

100s Under 100 aims for a balance between size and intimacy by splintering channels into smaller ones when they become unwieldy. Akin to “a state school or a large university, you make it smaller with subcommunities”, Ayres explains.

The group also purges inactive members periodically – a more deliberate form of the way everyone lets certain relationships fade away because of insufficient time or energy to maintain them.

More and more people are preaching the gospel of small being better when it comes to online social life. Scale may be one of the issues with the massive social networking sites that now dominate our lives. And for certain Facebook users, the smaller and more secret the groups, the better.

Thus far, the research of Dunbar and colleagues on online relationships suggests that these are similar to offline relationships in terms of numerical restrictions. “When people looked at the structure of online gaming world, they get virtually the same layers as we get in all of the other contexts,” he says. “And it just looks as though it’s the same design features of the human mind that are imposing constraints on the number of individuals you can kind of work with mentally at any one time.”

Dunbar and colleagues also have performed research on Facebook, using factors like the number of groups in common and private messages sent to map the number of ties against the strength of those ties.

When people have more than 150 friends on Facebook or 150 followers on Twitter, Dunbar argues, these represent the normal outer layers of contacts (or the low-stakes connections): the 500 and 1500. For most people, intimacy may just not be possible beyond 150 connections. “These digital media – and I’m including telephones in there – are really just providing you with another mechanism for contacting friends,” Dunbar says. 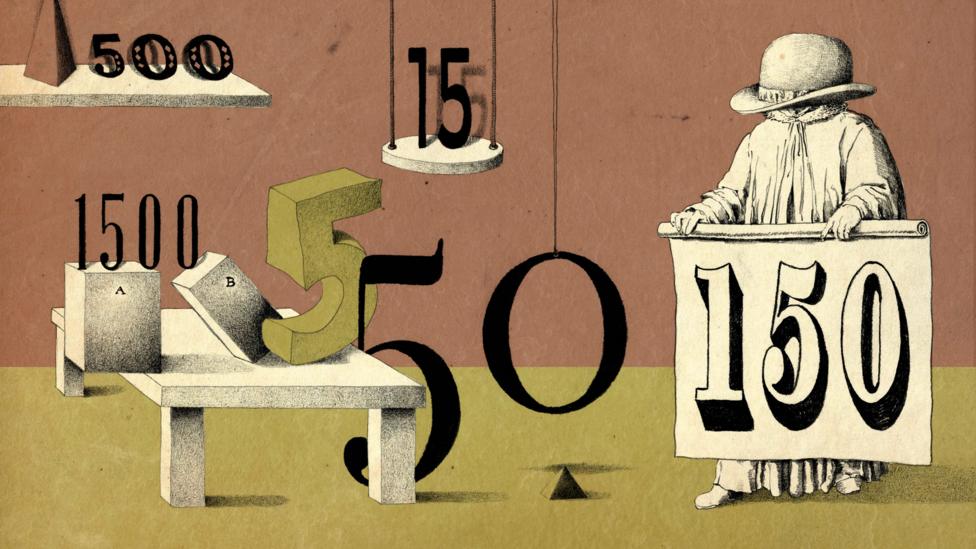 There is a balance between the amount of connections you have and the intimacy of those connections (Credit: Emmanuel Lafont)

Even the possibility of anonymity online doesn’t seem to Dunbar to be substantially different to the offline world. He compares anonymous internet interactions to the use of confessionals in the Catholic church. It isn’t a close relationship, but it is one that recognises the benefits of confidentiality among quasi-strangers.

“It’s extremely hard to cry on a virtual shoulder,” Dunbar deadpans. “Having a conversation isn’t like a lighthouse; it is not just blinking away out there and maybe someone is listening, and maybe somebody is not.”

In this view, the non-physical, non-real-time nature of internet relationships means that they can’t challenge “real-world” ones in meaningful ways. Face-to-face relationships, with all the non-verbal information that is so critical to communication, remain paramount.

But Dunbar’s own research suggests generational differences in this regard. Those aged 18–24 have much larger online social networks than those aged 55 and above. And the primacy of physical contact in the social brain hypothesis may apply less to young people who have never known life without the internet, for whom digital relationships may be just as meaningful as analogue ones.

Plus, online groups like 100s Under 100 aren’t intended to last forever; Ayres initially envisioned that the group would dissolve within a few years. Without the pressure for longevity, ideal community size may be less relevant.

It makes sense that there’s a finite number of friends most individuals can have. What’s less clear is whether that capacity is being expanded, or contracted, by the ever-shifting ways people interact online.

Curious about the hidden forces shaping the world? So are we. This article is part of our Invisible Numbers series, where we explore the digits, percentages and equations that govern our everyday lives in dramatic ways, often without us realising it.