There could be a simple way to help young children’s brains improve for the better, with long-lasting benefits.

Conversation runs out quickly when talking to a newborn. They don’t say anything back. They won’t groan when you tell them it’s going to rain, or smile when you tell a joke.

At the same time, those early weeks are shrouded in a cloud of exhaustion. My baby didn’t sleep when he was meant to, which meant I couldn’t either. It’s no wonder that conversation wasn’t exactly flowing.

It starts to feel easier when they become more responsive, but it still didn’t come naturally to me to “coo” in response to my baby’s gurgles, or speak in “baby-ese” with big, loud, slow vowel sounds. I would often look in awe as other, seemingly more parental types, would have whole conversations with my baby.

A few months in, as babies start to respond more with babbles and giggles, it becomes easier. But studies show that some parent still do not speak to their children much, and that this can have lasting negative consequences – consequences even visible in the brain.

It was in the mid-1990s that a worrying discovery was made about a stark difference in language achievement in children. Researchers Betty Hart and Todd Risley went into homes of families from different socioeconomic groups, spending an hour each month recording them over more than two years.

Analysing the data, they found that children from the poorest backgrounds heard one-third as many words per hour as those from higher income backgrounds. Scaling up, they proposed that by the time the children were four years old, there would be a 30-million word gap between children from poor backgrounds compared to those in wealthier, professional households.

This study was far from ideal. It had a small sample size, and it’s not clear if the word gap is as large as the researchers first suggested. Other critics have since shown that low-income children hear many more words than Hart and Risley reported when factoring in language they overhear from conversations both inside and outside the home. Responding to these critics, another group highlighted that “young children do not profit from overheard speech about topics of interest to adults”. 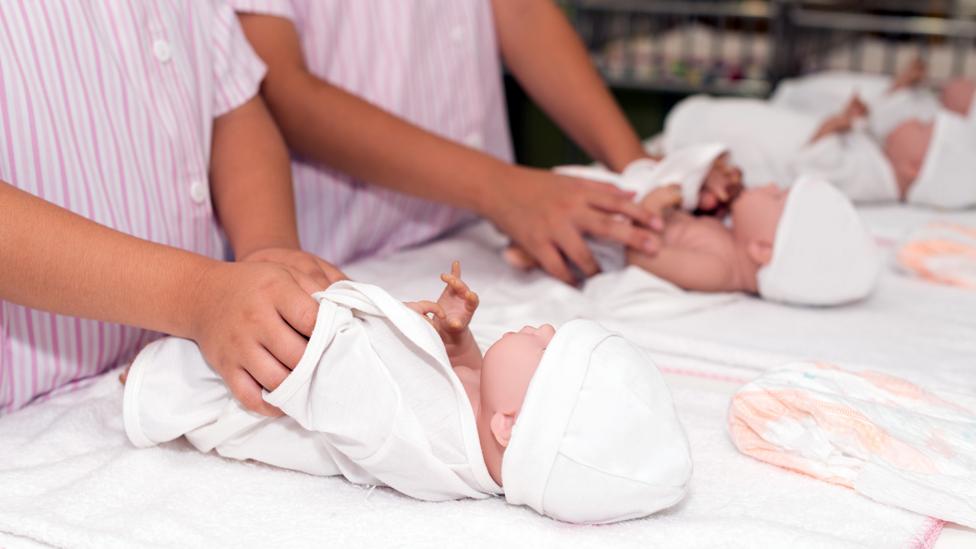 Depending on the conversations these infants hear from a young age, they may go on to have very different lives (Credit: Getty Images)

If this “word gap” does exist, it is problematic because language is known to be one of the most important predictors of how you are going to do later in life, from your earliest school years to university and in turn, your career. In order to read, learn basic numeracy and even to articulate memories, you need language.

“If that’s not where it needs to be, you’re already starting at the race behind,” says Kathy Hirsh-Pasek, who directs the Temple University Infant Language Laboratory in Philadelphia.

This lag also plays out in the brain. Neuroscientists are now able to show how the brain responds to early language exposure. One group, led by Rachel Romeo, a neuroscientist and speech language pathologist at Boston Children’s Hospital, showed that conversational interactions can have a visible benefit on brain development. The team recorded conversations in families’ homes monitoring both the amount of language they were exposed to and the number of conversational turns. Children who had more turn-taking conversations were better at language comprehension tasks.

These children also had stronger white matter connections in the brain in two major areas important for language, an increase that could speed up processing in these areas. This, says Romeo, shows that conversational turns contribute to brain development. “We found that more conversation correlated with stronger connections in this pathway, which in turn related to children's language skills,” Romeo says. 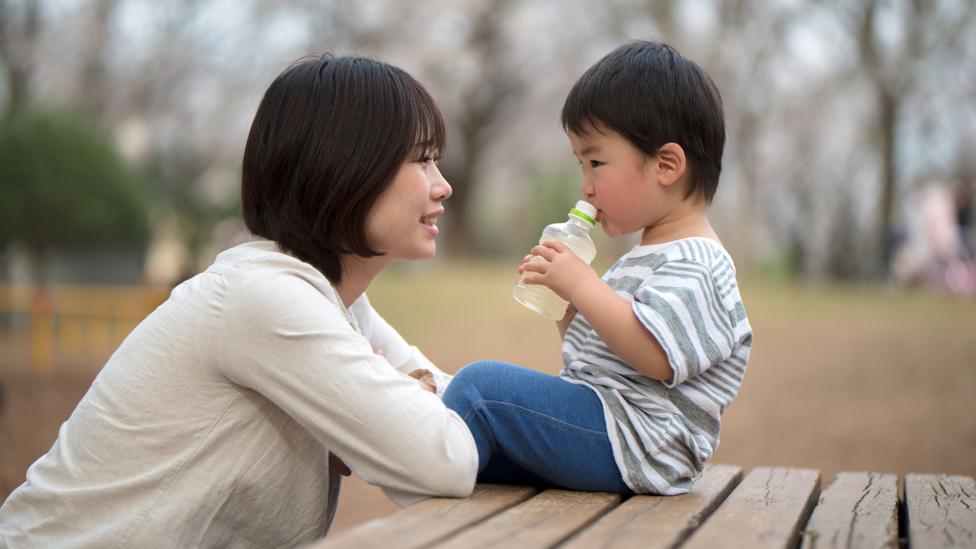 For child development, back-and-forth conversation – not merely passive hearing – is what matters most (Credit: Getty Images)

Indeed, a large body of evidence shows that it is not passive hearing – or even the amount of words a child is exposed to – that matters most. Instead it is the quality of the conversation that is important. That is, the back and forth, turn-taking nature that requires listening and responding. It’s what Hirsh-Pasek and her long-time collaborator Roberta Golinkoff refer to as a “conversational duet”, because “you can’t sing it alone”. In fact, another study found that if a conversation is interrupted by a phone call, the child does not learn a newly presented word, but will learn it if the conversation is not interrupted.

Romeo’s team went one step further in a small follow-up study that helped parents understand the importance of turn-taking conversations. In this group, they found increases in grey matter in language and social regions of the children’s brains.

“That’s not a coincidence,” she says. It makes sense that the social and language areas of the brain are “coming together” in these child-parent relationships, as language underpins our social relationships, and both are fundamental for how we learn. “We have this human desire to communicate,” she says. “On top of that we build our language skills and those language skills add a foundation for higher level cognition.” 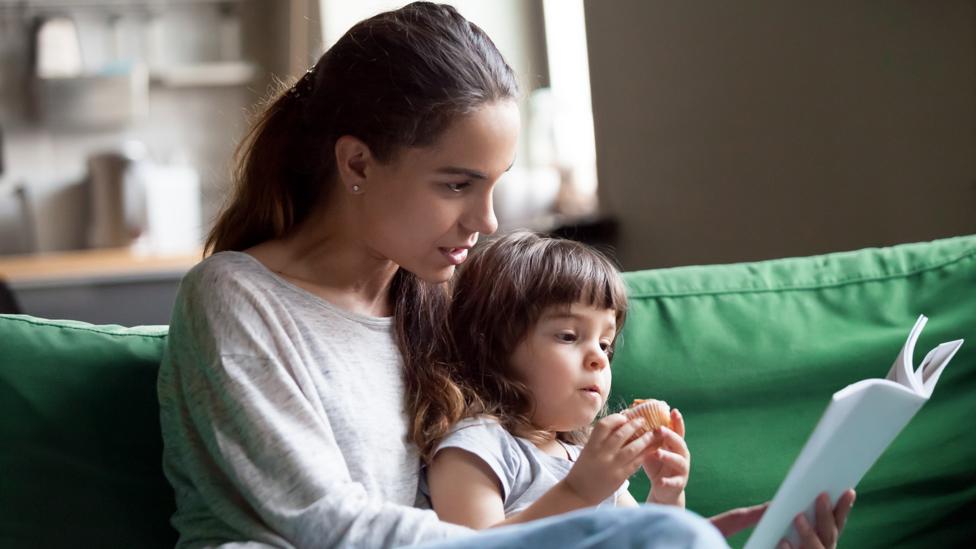 Meanwhile, another group, this one at the Princeton Baby Lab, monitored babies and experimenters’ brains to find that when they were engaging in interactive play, such as singing or reading, their brain activation patterns started to converge. In other words, their brains “become coupled together”, explains Elise Piazza of the Princeton University Neuroscience Institute, the lead author of the work. At other times when taking part in separate activities, the “neural synchrony” between their brains disappeared, she says.

“It’s as if you become so tuned in that you’re operating not as two people, but as one. That’s where we believe the learning gets heightened and takes place, and that’s what conversation brings you,” Hirsh-Pasek says of the work.

Given how important conversations are from such a young age, how worried should we be about the “word gap” – and where does it come from? 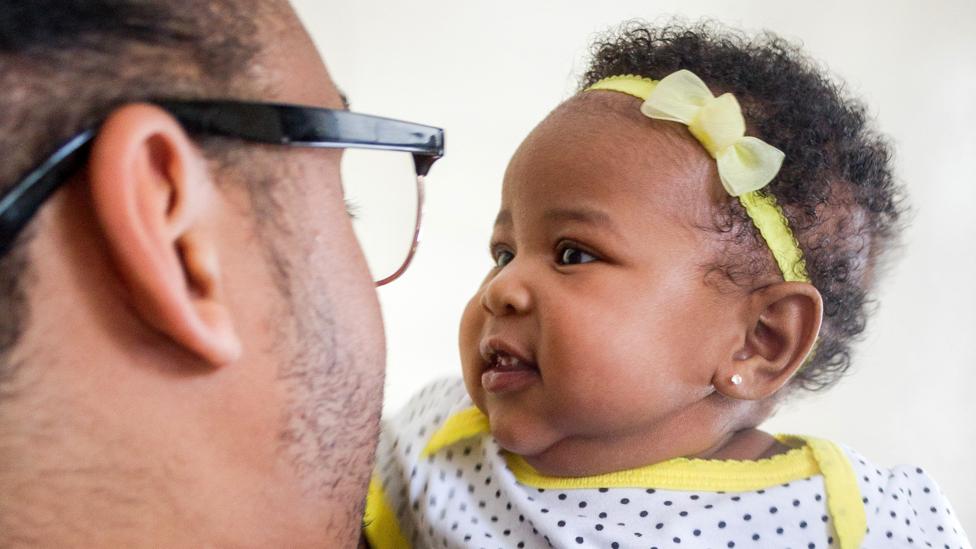 Higher-income parents tend to use longer sentences and more vocabulary with their children – in part because of their education levels (Credit: Nappy.co)

Even if Hart and Risley’s study wasn’t perfect, the idea that a significant socioeconomic gap exists has been replicated by dozens of studies. In 2008, for example, Meredith Rowe of Harvard University found that types of conversations do differ significantly between low- and high-income families – in part due to the differing levels of education reached by the parents in these groups.

In other words, “parenting knowledge” contributes positively to vocabulary development, says Rowe. In this study, higher-income parents used longer sentences and more vocabulary than the lower-income parents. “The key finding here was that the influence of poverty on how parents communicated with their children was explained by how much the parents knew about child development,” she says.

If there is any association between socioeconomic status and verbal abilities, it may be because poverty is linked to both lower levels of education as well as to greater stress. Both factors mean the quality of conversations can suffer.

In one 2015 study, Hirsh-Pasek and colleagues looked at the speech of 60 children, all from low-income families, at age two; they returned one year later to see how these children had developed. As anticipated, the children who were taking part in more conversations at two had more advanced language one year later. Those who had fewer conversations scored worse on language ability. 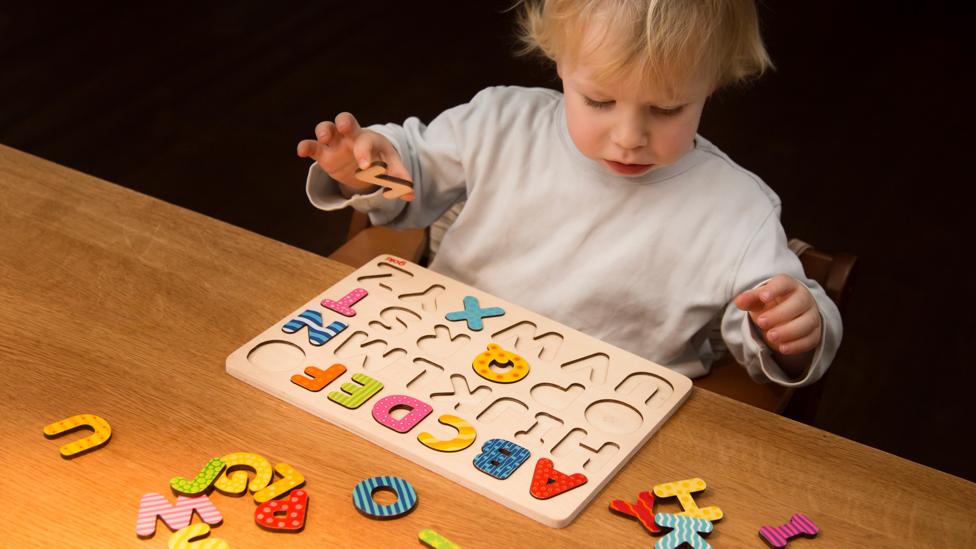 As these children were all from lower-income backgrounds, the results show that poverty alone is not what predisposes a child to poorer language skills.

“It’s not just about whether you were born into an under-resourced environment, but it's how you interact with your child in that environment that seems to make a difference,” says Hirsh-Pasek.

Though a word gap can have lasting consequences, the good news is that all parents talk to their children at least some of the time. If parents understand that quality interactions are more important than quantity, then all children could benefit.

The more social experiences they have, whether with their parents or with any other caregivers around them, the more they will learn, she adds.

There are other ways to help speed this process along, too. Parental coaching is effective, but it is time consuming and expensive. Fortunately, there are other simple, tried-and-tested ways that help encourage more quality conversations. 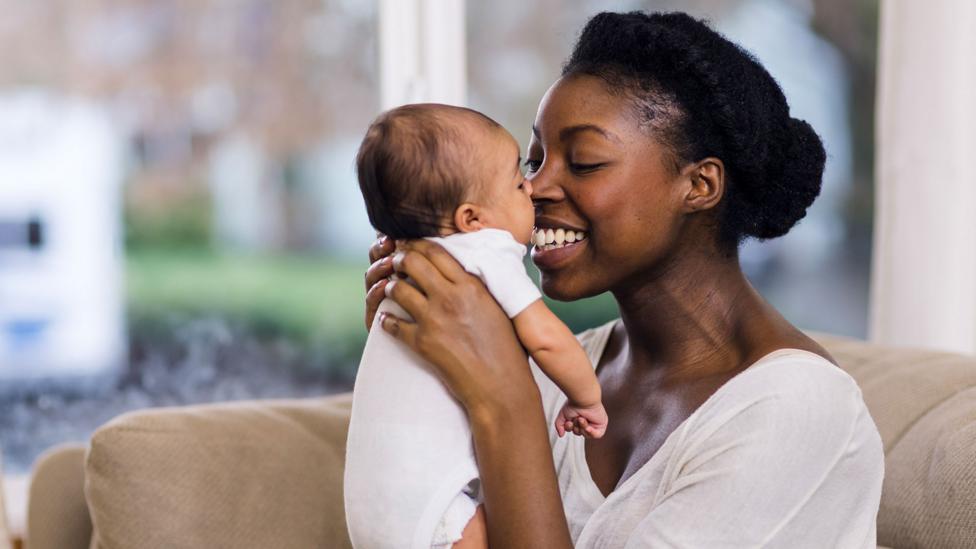 The more social experiences babies and children have, the more they will learn (Credit: Getty Images)

Hirsh-Pasek and colleagues have shown that in under-resourced communities in some of the poorest neighbourhoods of Philadelphia, putting prompts in supermarkets increases meaningful conversation by as much as 33%. These could be as simple as colourful posters asking questions like “Where does milk come from?” and “What is your favourite vegetable?”.

I visited several sites in Philadelphia – including at a bus stop, as well as a playground at a library and at human-sized board games in Philadelphia’s Please Touch children’s museum – where Hirsh-Pasek and her team are trying another approach. Here they use games to encourage several important aspects of learning, from the social to the cognitive, from impulse control (hop scotch) to executive function (problem-solving games). Crucially, they were carefully placed in areas where people already gather in groups. And though the games are geared towards children, they were remarkably fun for us adults too.

The project, called “Playful Learning Landscapes”, involved collaborating with city councils and architects to “transform everyday places into learning opportunities”. What’s more, close monitoring by nearby researchers showed that some of these projects helped increase conversations by 30-55%. “As an added gift, when you make these environments interesting, their parents are more likely to put their cell phones down, look in the eyes of their child and have a meaningful conversation,” says Hirsh-Pasek. “Imagine what we could do if we made the world just a little bit more fun.” With enough will, the researchers say it should be easy to recreate similar spaces in many other cities. 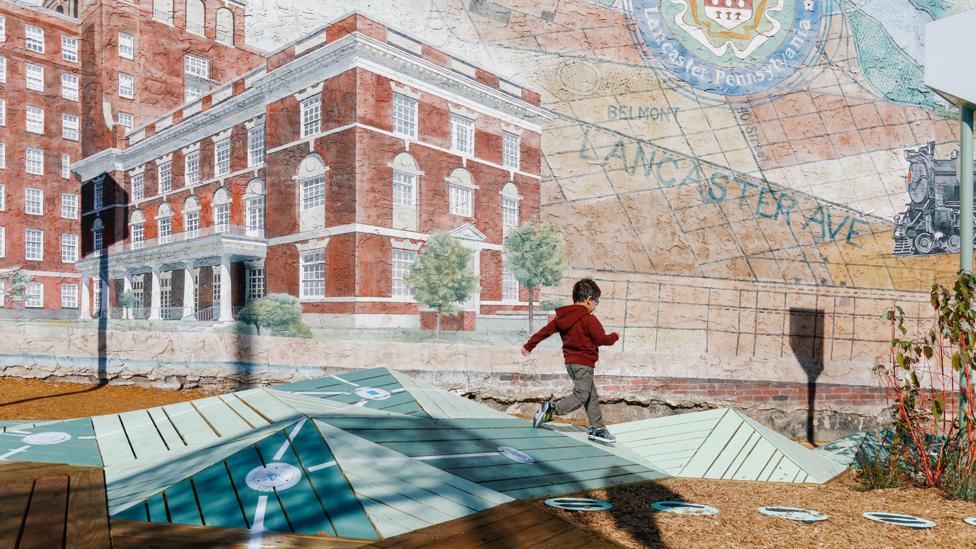 For some, the stress of day-to-day life can leave less time for talk and play. But it is now clear that subtle tweaks in how we speak to children – and how we listen – can literally grow their brains for the better.

Armed with this knowledge, I now find myself thinking about my baby’s brain patterns as I coo and speak to him, telling him snippets about my day but also asking him questions to see how he responds. Often I’m greeted with a toothless grin. Other times he doesn’t respond at all. But even so, now I know that his brain may well be growing because of it, something all of us, whether parents or caregivers, can play a crucial part in.

Melissa Hogenboom is the editor of BBC Reel. She is @melissasuzanneh on Twitter.

Did you enjoy this story? Then we have a favour to ask. Join your fellow readers and vote for us in the Lovie Awards! It only takes a minute and helps support original, in-depth journalism. Thank you!