We’ve been led to believe that an occasional glass of wine might be better than abstaining from alcohol altogether, but that might not be the case.

* This story is featured in BBC Future’s “Best of 2019” collection. Discover more of our picks.

Even though alcohol kills millions of people every year, humans have been imbibing for millennia. In the last few decades, wine, in particular, has gained a reputation for being good for our health. Red wine even has been linked with longevity and lower risk of heart disease.

But could wine really be good for us?

The first question, of course, is what we mean by “good for us”. Many people think of heart health when we think of the potential upsides of wine.

“While a lot of work [has] been done to communicate the link between smoking and cancer, this is less so for alcohol because public health officials control messaging for smoking, whereas with alcohol, it’s largely been up to the alcohol industry to communicate this itself,” says Mark Bellis, director of policy, research and international development at Public Health Wales.

You might also like:
• Is beer better for you than wine?
• Why do you feel hungry after eating a big meal?
• Is it better to drink cow's milk or go dairy-free?

The idea that research shows a tipple can be beneficial dates back to the 1970s, when scientists found that French people were less likely to have heart disease than other populations, despite eating more saturated fat. There was a clear relationship between lower levels of heart disease and wine consumption. This came to be known as the French paradox – a conundrum which scientists are still untangling today. 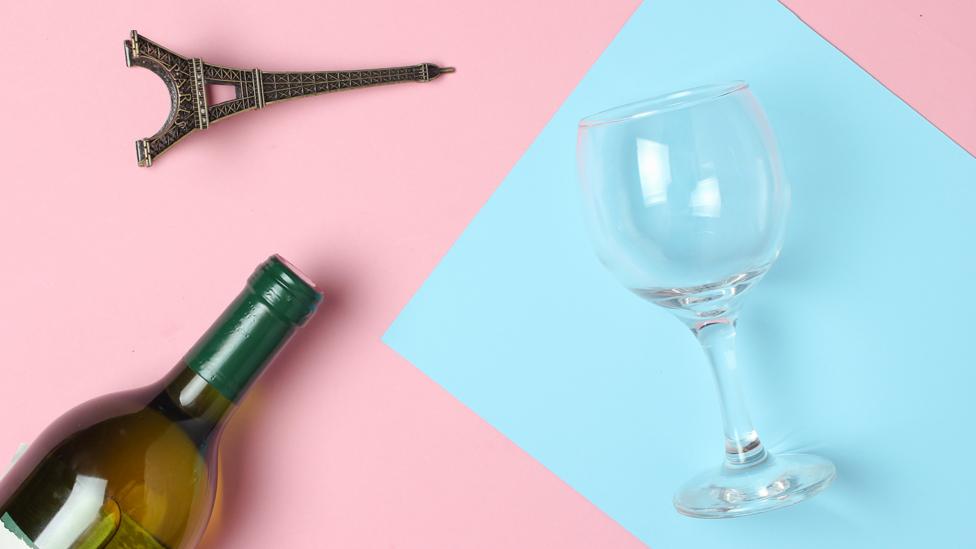 In the 1970s, scientists found that French people were less likely to have heart disease – which may be related to wine consumption (Credit: Getty Images)

We have since been led to believe that moderate wine-drinking can reduce our risk of heart disease, high blood pressure, diabetes, and weight gain.

“Early research found that moderate levels of wine consumption had a ‘J’-shaped curve effect,” says Helena Conibear, co-director of The International Scientific Forum on Alcohol Research. “Small, regular amounts of wine seem to lead to longer life, better health and less cognitive decline. Since then, more than 1,000 papers have been published reiterating that.”

As a result, for a long time, the consensus was that abstaining from alcohol is unhealthier than consuming moderate amounts of alcohol (equivalent to one or two drinks a day).

But that “J”-shaped relationship between alcohol consumption, and death and disease, has come under criticism. It’s now widely understood that a lot of this data could be flawed: people abstaining from alcohol may be doing so because they’re unwell, rather than becoming unwell because they’re abstaining. (This challenge in sorting out cause from effect is the issue with many observational studies, which most nutrition studies are).

When controlling for this, one 2006 analysis of 54 previously published studies found no correlation between moderate alcohol consumption and lower risk of heart disease. 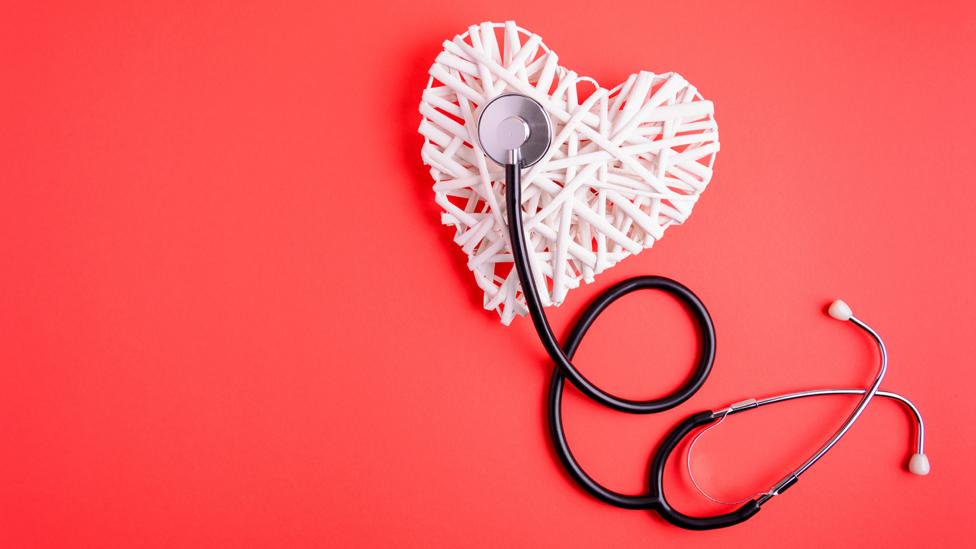 Studies have found that moderate drinkers have a lower risk of heart disease… but also that they don’t (Credit: Getty Images)

But in the years since, says Conibear, other studies have found the opposite. “Over the last five years, research has looked at confounding factors,” she says. “We know wine drinkers tend to be better off, better educated and have a less sedentary lifestyle – and adjusting for that, the J-shaped curve can’t be denied.”

She says researchers have got around this bias by using participants who’ve never drunk before, rather than those who used to drink and now abstain, as they’re more likely to abstain for health reasons.

In one 2019 study, researchers took a different approach to determine whether moderate alcohol intake really is linked to lower risk of heart disease. For 10 years, they followed more than 500,000 adults in China, where two genetic variants (ALDH2-rs671 and ADH1B-rs1229984) influence alcohol drinking patterns, rather than ill health. They also excluded people with poor health.

“Those with no defects can drink as much as they like,” says Zhengming Chen, one of the study’s authors and professor of Epidemiology, at the University of Oxford’s Nuffield Department of Population Health. “But those with a dysfunctional enzyme can’t tolerate alcohol at all,” he says.

The researchers also used Chinese women as a control group, because while many Chinese women can metabolise alcohol, many don’t drink for social, rather than health reasons, Chen says. 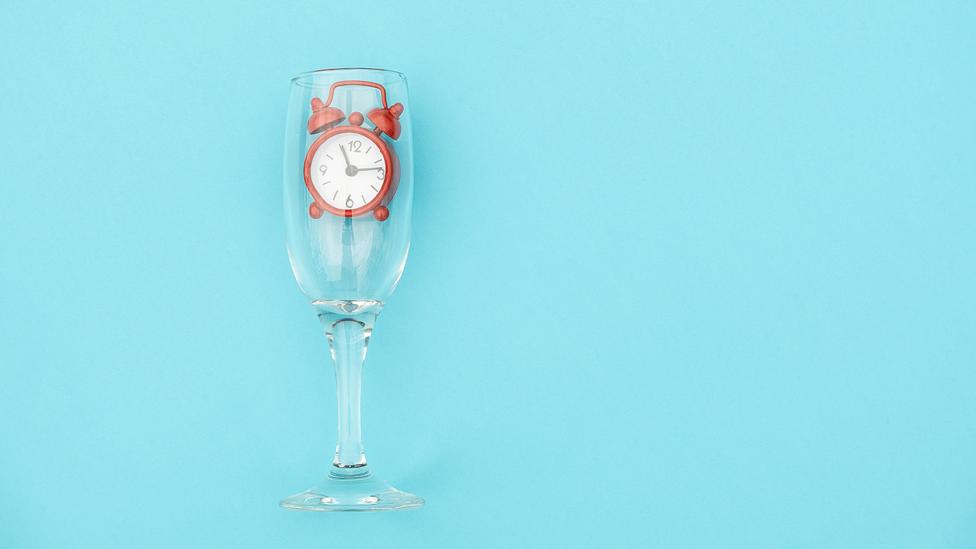 One study found the more people drank, the more likely they were to experience high blood pressure and stroke, but not heart attacks, over a 10-year period (Credit: Getty Images)

This time, the researchers found no “J”-shaped correlation. Instead, they found that the more people drank, the more likely they were to experience high blood pressure and stroke – and there was no reduced risk among people who drank one to two units per day. There was no association either way with heart attacks.

As a result, while there was a clear link between alcohol consumption and stroke risk, something in alcohol may protect us against heart attacks.

“Our study shows that alcohol definitely has a protective mechanism, because high alcohol consumption consistently increases blood pressure, but for heart disease the association is quite flat,” Chen says. 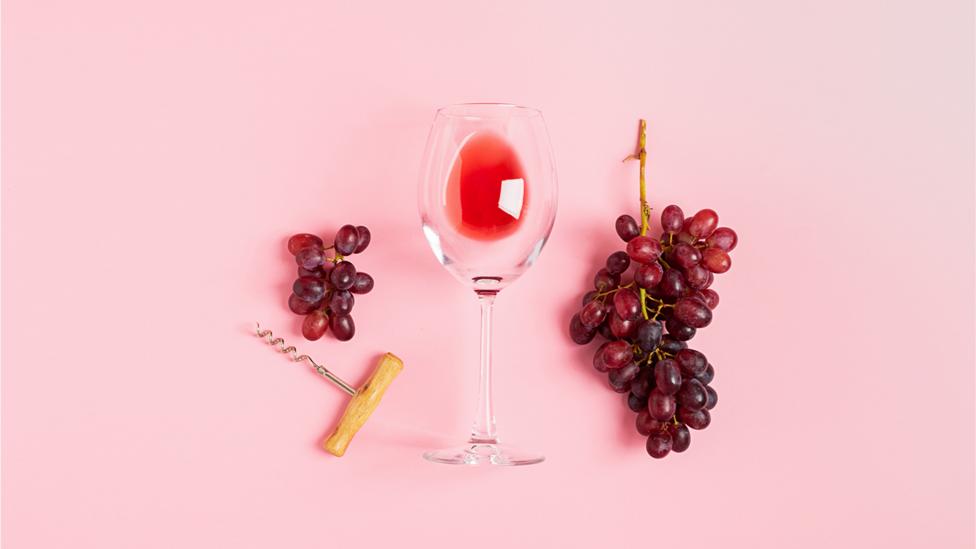 It’s important to note that the researchers converted all alcoholic drinks into standard alcoholic units, so the results aren’t specific to wine. However, Chen argues wine wouldn’t have shown any different results.

But wine normally is considered the “healthier” option because of its antioxidants called polyphenols. Also found in fruit and vegetables, polyphenols reduce inflammation in the body, which is a factor for disease. There are ten times as many in red wine than white.

Alberto Bertelli, a researcher at the University of Milan's department of Biomedical Sciences for Health, has found that small amounts of wine can protect us against heart disease, partly due to the drink’s anti-inflammatory properties. He recommends no more than 160ml of wine a day (the size of a champagne flute), but only with a meal, Mediterranean style.

Research has focused on the polyphenol resveratrol in particular, a naturally occurring compound found in grapes’ skin and seeds. Resveratrol is thought to protect against high blood pressure by dilating blood vessels. 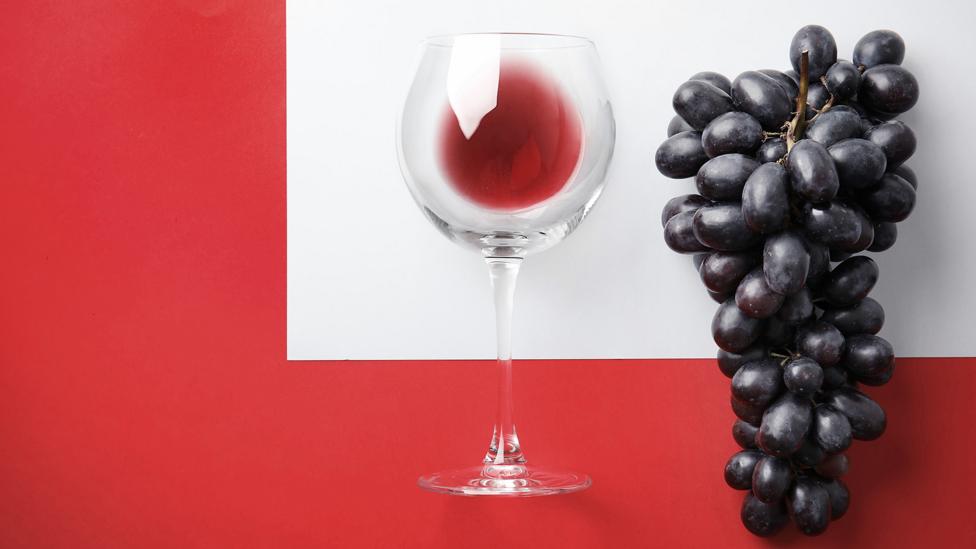 Most research on wine and health has focused on resveratrol, an antioxidant found in grapes (Credit: Getty Images)

But despite there being no resveratrol in white wine (even though it’s in white grapes), Bertelli observed the French paradox also applies to white wine-drinking areas in France. In other words, white wine may have the same health benefits – if wine has benefits at all.

“We found in white wine two compounds common to extra virgin olive oil, which is recognised as a healthy food, more or less in the same amount,” Bertelli says. These compounds, tyrosol and hydroxytyrosol, have also been found to be protective against Alzheimer’s disease.

Most researchers, however, have found that the vast majority of any believed health benefits apply only to red wine.

Red wine may be good for gut health, which has numerous benefits to the rest of our body, including improved immunity and digestion, and a healthier weight. In a recent study, researchers studied the drinking habits of twins and found that drinking red wine could improve the diversity of bacteria in the gut, which is linked to better health. But the observed benefits on gut health were found with just one glass of red wine per week, and anyone drinking more than two small glasses a day was excluded from the study. (Find out how your the bugs in your belly could heal your brain.) 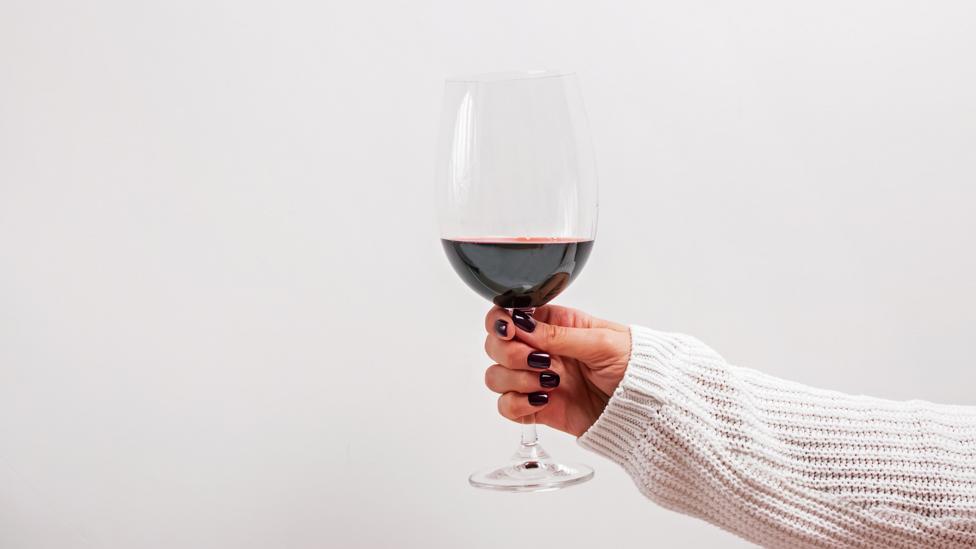 A glass of red wine a night is associated with lower BMI and better gut health, but red wine drinkers may simply be healthier to begin with (Credit: Getty Images)

The researchers also found that people who drank red wine had a lower body mass index (BMI). This also could be why drinking red wine in moderation is associated with health. It’s not that red wine makes you healthier; it’s that red wine drinkers may be healthier to begin with.

The same is true of the gut health question: because the study was observational, the researchers couldn’t establish whether a single glass of red wine a week makes your gut healthier, or people with healthier guts happened to be the kind to drink a glass a week. And randomised control trials, where participants are split into groups and their health measured as they follow different diets, can be particularly unethical when it involves alcohol.

There have been a few randomised control trials – but these have been less than conclusive. A 2016 study found that having one glass of red wine with their evening meal every day for six months didn’t affect the blood pressure of people with diabetes.

Another randomised control study from 2015 found that drinking 150ml of red wine (again, the amount held in a champagne flute), can lower the risk of developing stroke and heart disease among people with diabetes.

In fact, while red wine may be the healthiest drink option, it’s healthier to abstain entirely, says author of the study looking at wine consumption and gut health, Caroline Le Roy, research associate at the Department of Twins Research at Kings College London.

“We know alcohol is bad for us,” she says. “If you drink, it should be red wine, as this is the only alcoholic drink that’s been found to have a beneficial effect, but I’m not encouraging people to drink red wine.” 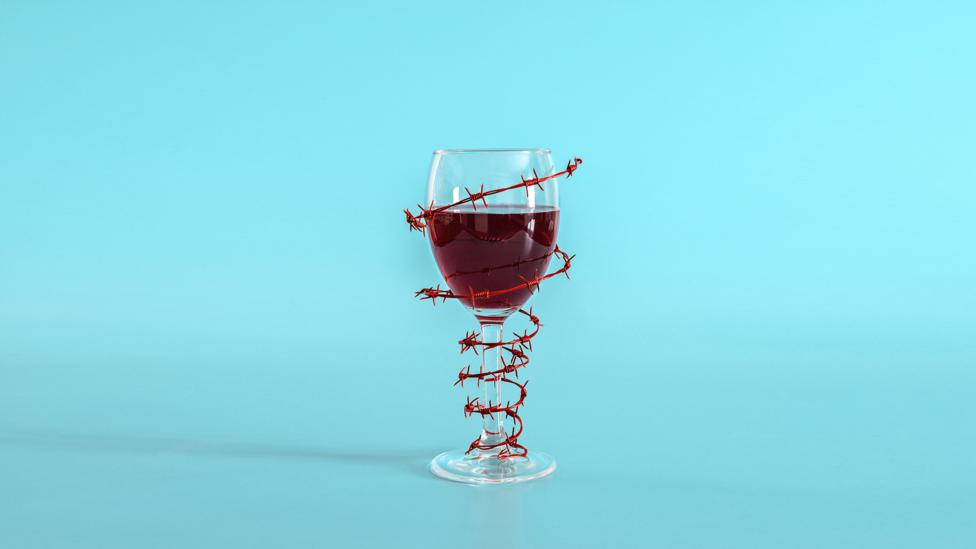 Red wine is the only alcoholic drink that’s been found to have any health benefit – but that still doesn’t mean it’s a healthy option (Credit: Getty Images)

Research generally attributes any protective mechanism to resveratrol. But while some researchers believe resveratrol’s ability to be absorbed into the bloodstream is enough to derive antioxidant effects, others doubt it stays in the bloodstream for long enough to benefit us.

“There’s controversy around the level of dose you can absorb from a glass of wine, and its bioavailability, which is the body’s ability to absorb it and do us good,” says Conibear.

There has been increasing attention on resveratrol supplements in recent years. However, data on the effectiveness of resveratrol pills is conflicting. Bertelli argues that we need the alcohol component of wine to absorb resveratrol.

“Resveratrol has the same bioavailability as other polyphenols in fruit, but it doesn’t matter how much you ingest, it matters how much gets into the bloodstream,” he says.

“Before we absorb the compounds in wine, they must be dissolved. They help others absorb, they all work together, and this is unique to wine,” he says.

According to UK guidelines, which are among the most stringent globally, we should drink  no more than 14 units of alcohol per week. While the research on any health benefits of wine is nascent, it is still largely agreed that the healthiest option is to abstain – and that red wine is the healthiest option for those who do drink. 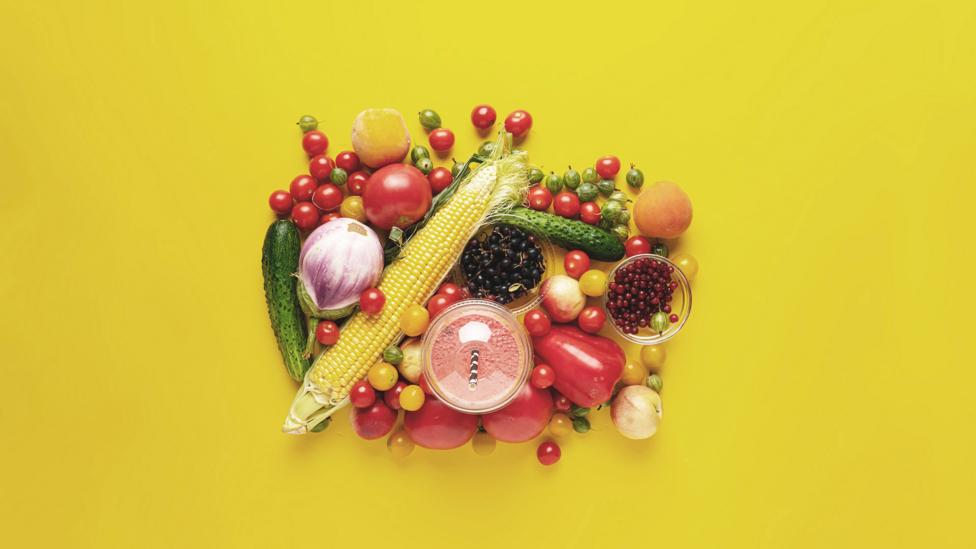 There are other ways to boost our health more effectively than drinking wine… such as eating fruits and vegetables (Credit: Getty Images)

But we shouldn’t drink red wine for any health benefits, Bellis says, because there are numerous ways to boost our health more effectively. “Of course people want to hear that the half a bottle of wine they drink after work is at least doing them no harm, and even better, could be doing them some good. But that’s far from truth,” he says.

Want to boost your health? Eating more fruits and vegetables, and exercising, remain the best and most proven ways to do it – not pouring yourself a glass of wine.